20 Spectacular Tennis Courts To Play In Your Lifetime

by Architect K.A.
Reading Time: 10 mins read
0 0
A A
16
SHARES
102
VIEWS
Share on FacebookShare on TwitterPin to Pinterest

While people like to argue about grass versus clay versus hard courts, everyone can agree that the surface becomes secondary when the courts are this scenic.

We found the most beautiful tennis courts in the world that are open to the public.

Every tennis player should add these 20 courts to their bucket list. 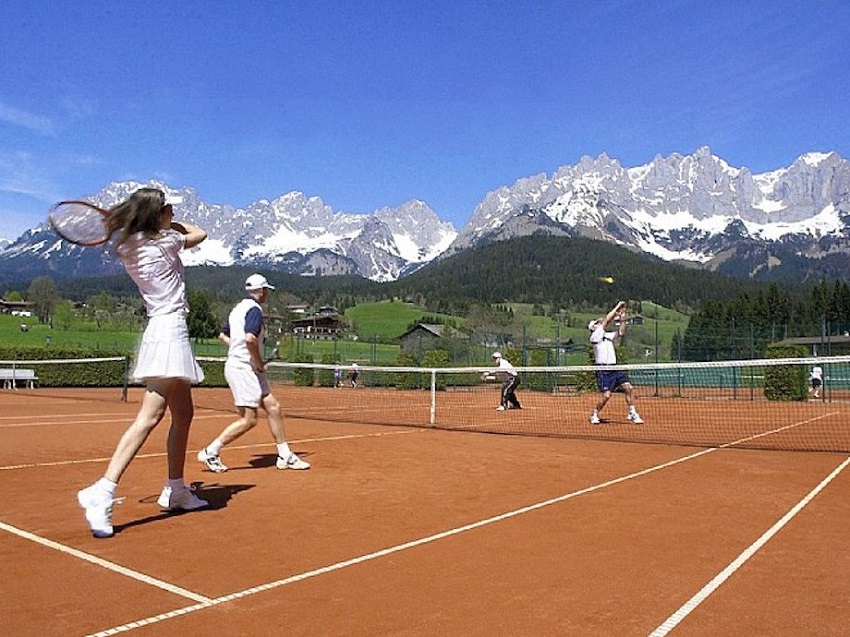 The rugged Wilder Kaiser mountain range in the Austrian Alps (which aptly translates to wild king), make for a breathtaking backdrop to your backhand in this eco-friendly resort. 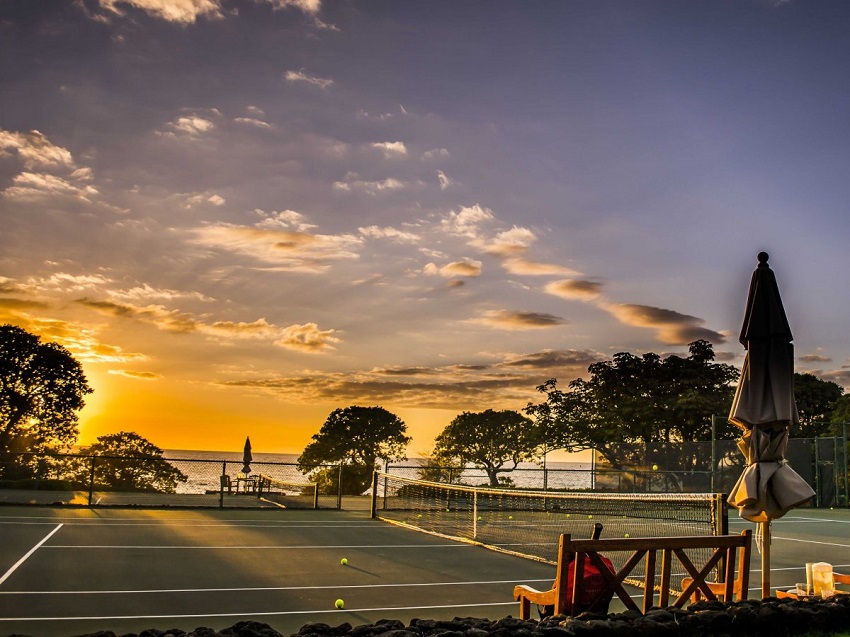 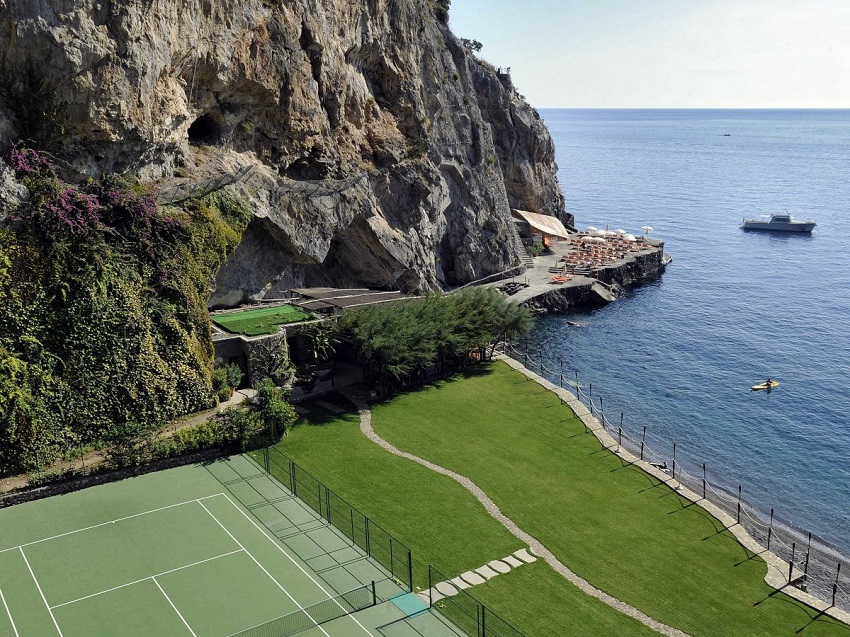 Befitting a five-star hotel that hosts the likes of George Clooney is this luxury resort’s epic seaside tennis court, which sits 384 steps down from the hotel between limestone cliffs and a private beach. Views span rugged cliffs and the Mediterranean, with Capri sparkling in the distance. Try booking the court around sunset for an especially breathtaking experience, and then grab a drink at the hotel bar. 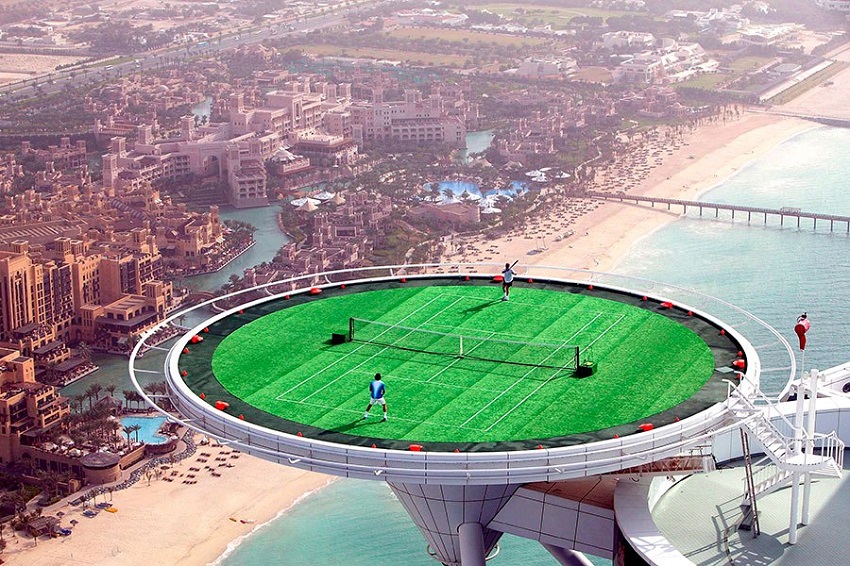 The world’s highest tennis court rests atop Dubai’s Burj al Arab. At about 690 feet, the grass court offers panoramic views and a thrilling match not for the faint of heart.Learn more here » 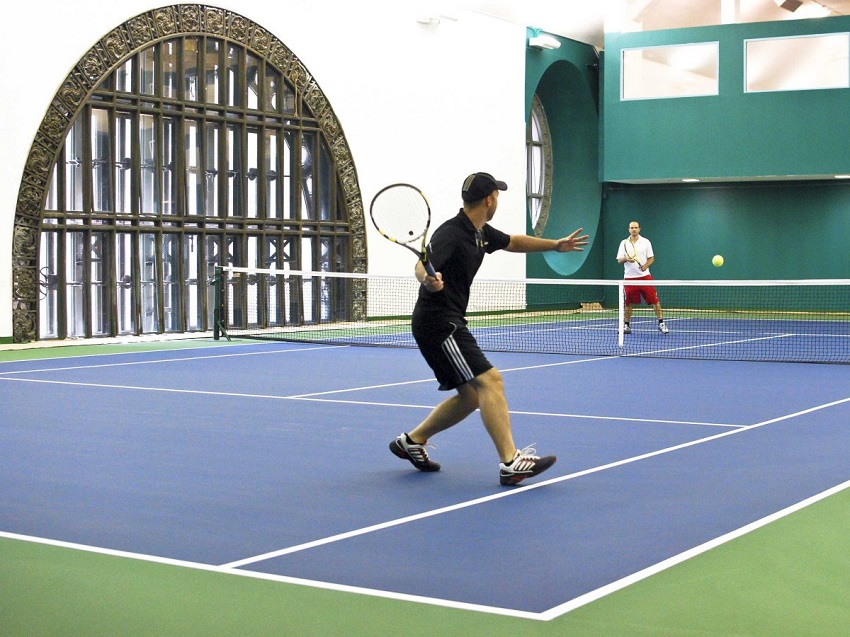 Courtesy of the Vanderbilt Tennis Club

Grand Central is full of secrets, like whispering galleries and hidden speakeasies. But one of its biggest treasures? A tennis court. Even more surprising than a tennis court inside of a train station is that said court is open to the public, though with astronomical pricing of up to $250 an hour. 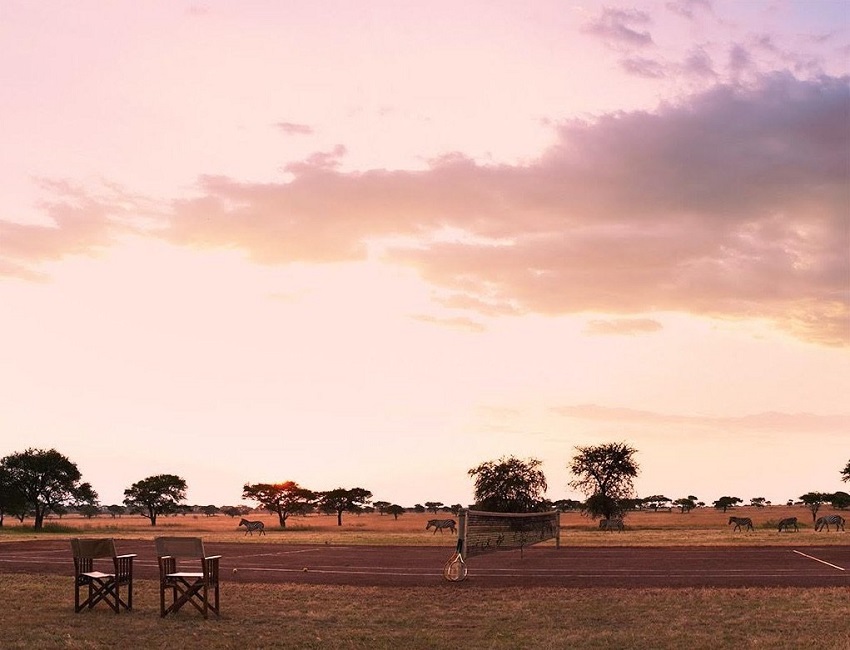 If you can take the hot African sun, check out this luxury safari lodge’s beautiful court, which has insane views that stretch across the African plains of the Serengeti National Park. Just don’t be surprised if your game is interrupted by game. 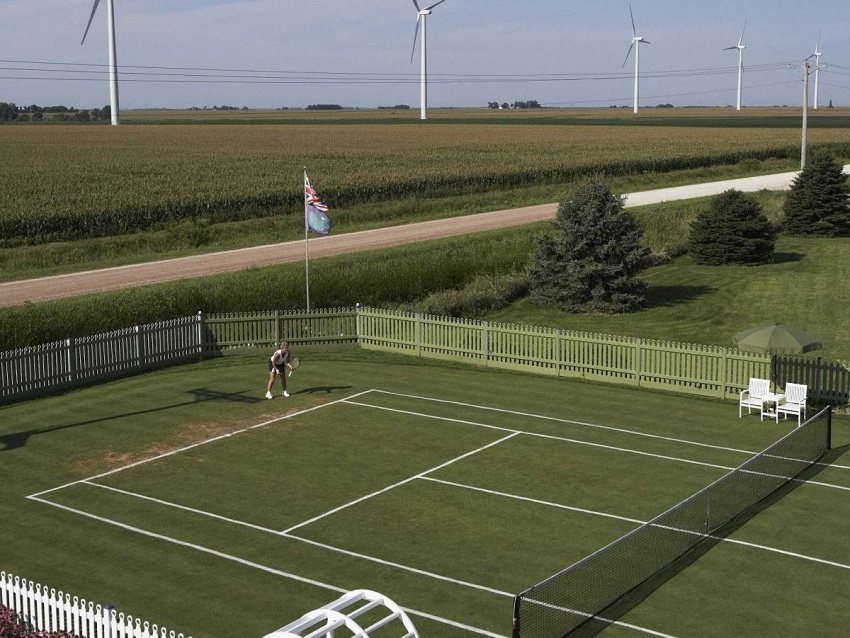 Ever since listening to Wimbledon on his grandfather’s radio in 1962, Mark Kuhn dreamed of having his own court. In 2003, he and his family realized that dream by carving a court into their corn farm on a former cattle feed lot. The All Iowa Lawn Tennis Club, made to resemble Wimbledon’s Centre Court, is free to play on — all you need to do is reserve a court via email. 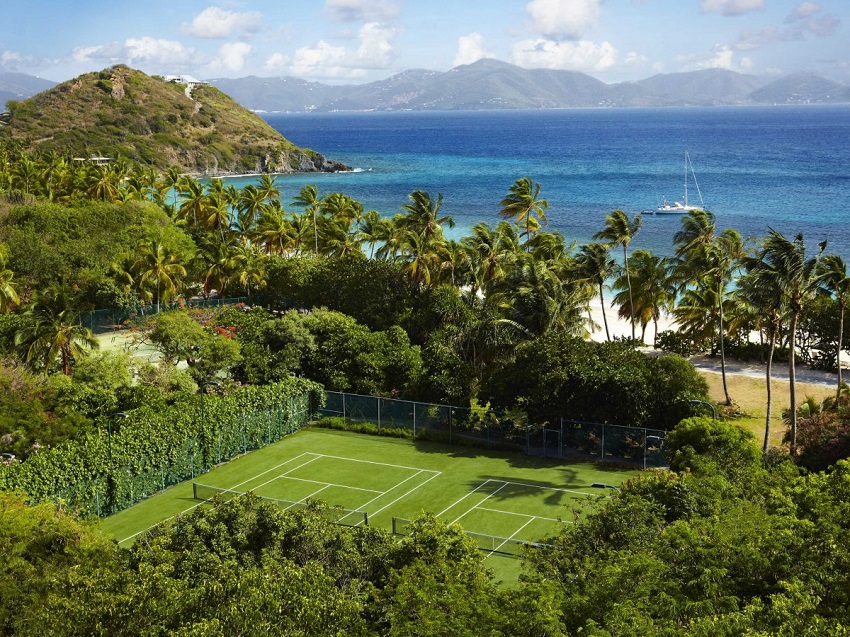 This private island boasts some of the most beautiful palm-fringed courts we’ve ever seen, and hopefully a cool breeze from the nearby ocean. 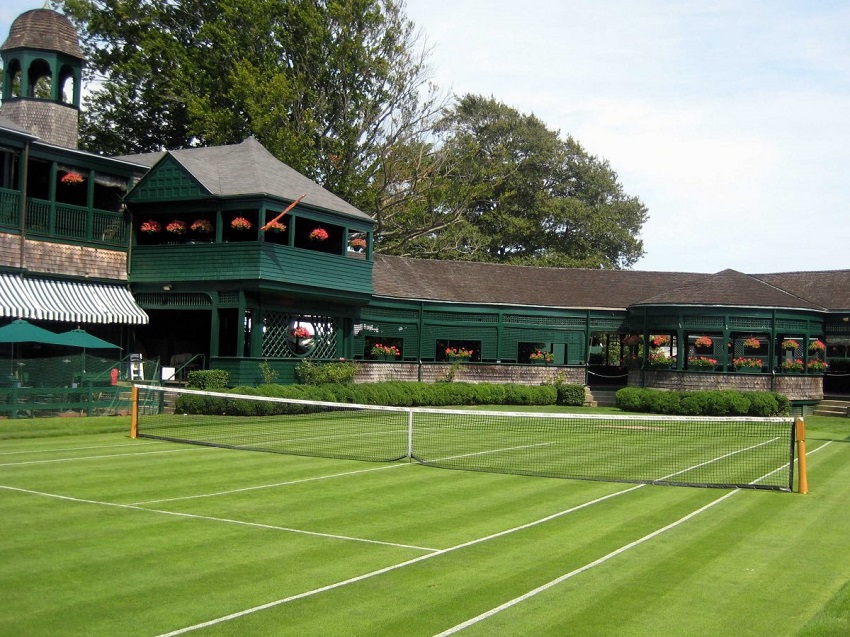 These courts are where the US tennis championships — now known as the US Open — began in 1881, and were played until 1915. Clay-court rentals are a reasonable $35 an hour, while the grass courts are a pricier $80 for 30 minutes. Don’t forget your tennis whites. 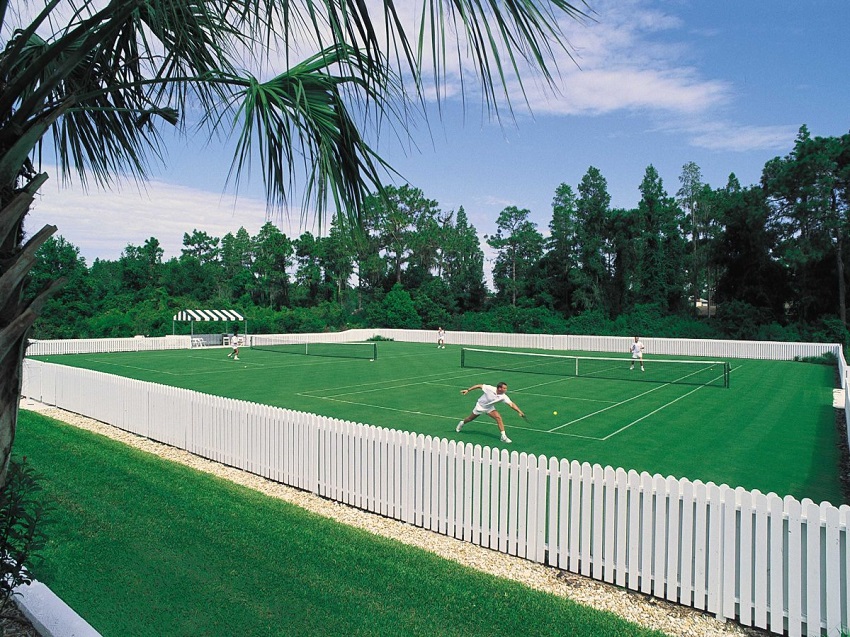 Florida is like a tennis-pro factory, so it comes as no surprise that one of the world’s most famous tennis academies hails from the state. Saddlebrook, which has 45 courts, is where kids with dreams of going pro are sent, where pros themselves practice, and where adults dreaming of releasing their inner Federer take lessons. 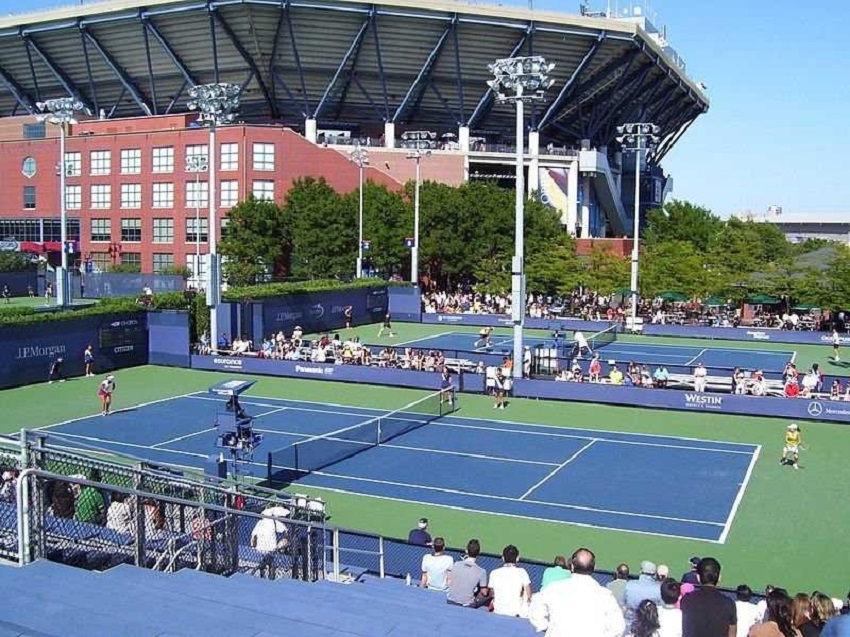 In the shadows of the Arthur Ashe Stadium — the US Open’s main court and one of the world’s largest tennis-specific stadium — the USTA Billie Jean King National Tennis Center, which features 33 courts and is part of the complex, will still have you feeling like a pro. 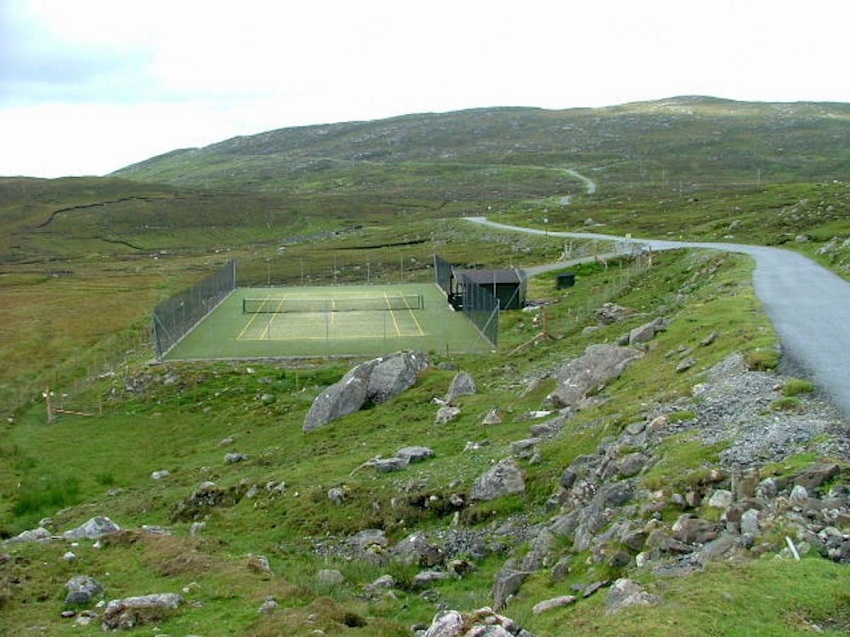 Nestled among craggy cliffs and hills and loch, with panoramic views of the ­Atlantic Ocean, this just might be the world’s most spectacular tennis court. You can play on the court, owned by a charitable foundation and run by tennis coach Mike Briggs, as long as you snag a reservation — and can find it. 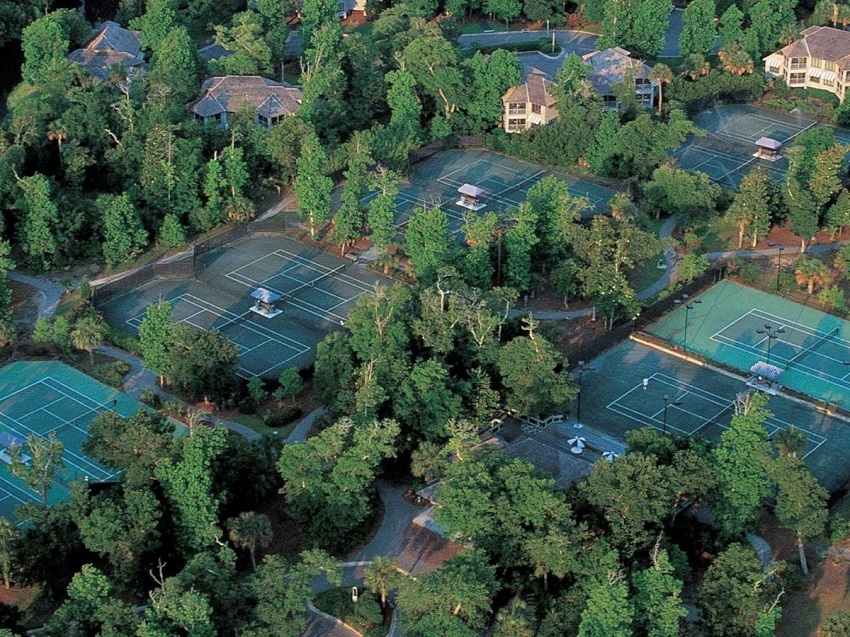 Don’t be fooled by the name — or the location in one of the world’s golf meccas — because this resort was voted the very best by thousands of tennis players on Tennis Resorts Online. The massive resort is home to two complete tennis complexes, and takes up almost all of the 10,000-acre island it’s located on. 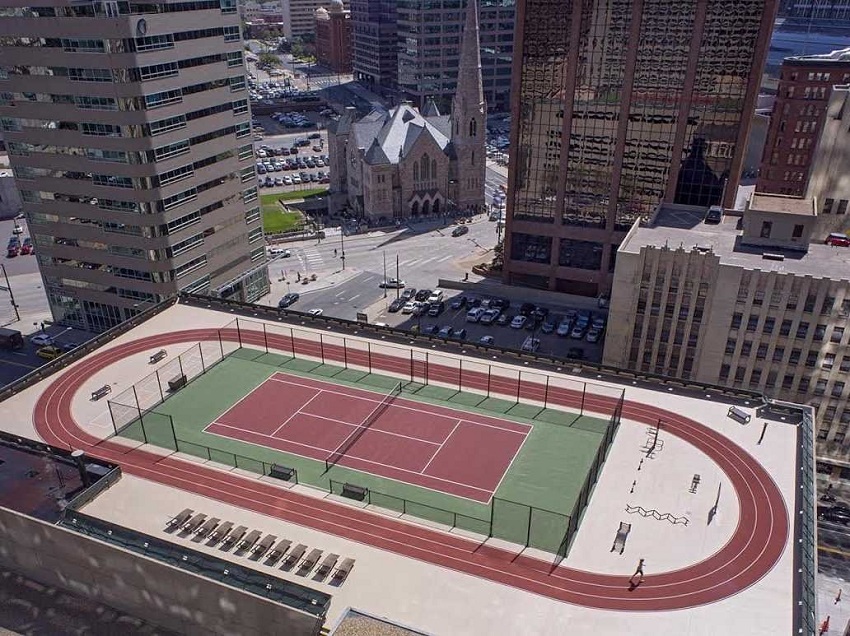 Get sky-high in the Mile High on this rooftop tennis court, which overlooks the Denver skyline and the Rocky Mountains. Since Denver boasts 300 days of sunshine, chances are you’ll have an epic game. 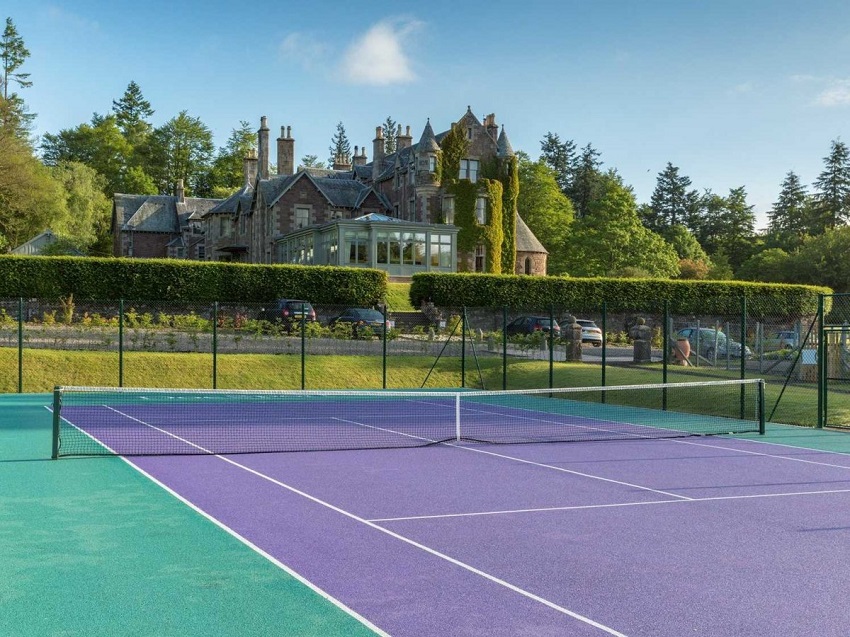 Play in the shadows of a Scottish castle at Cromlix Hotel, on courts that dazzle in the bright colors of Wimbledon. Hey, if they’re good enough for owner Andy Murray … 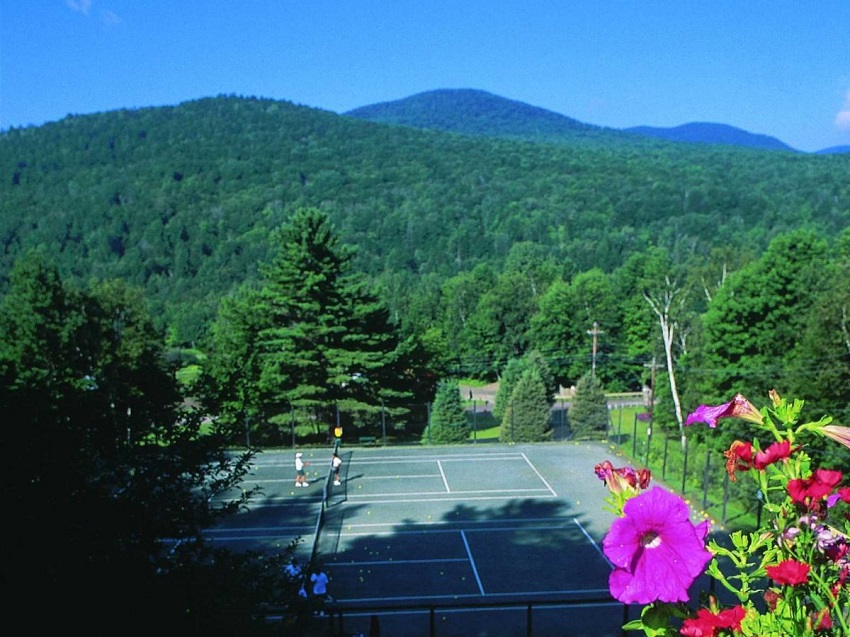 Consistently ranked among the country’s top resorts, Topnotch features 10 courts, four of which are indoor, so you can play through those harsh Vermont winters. 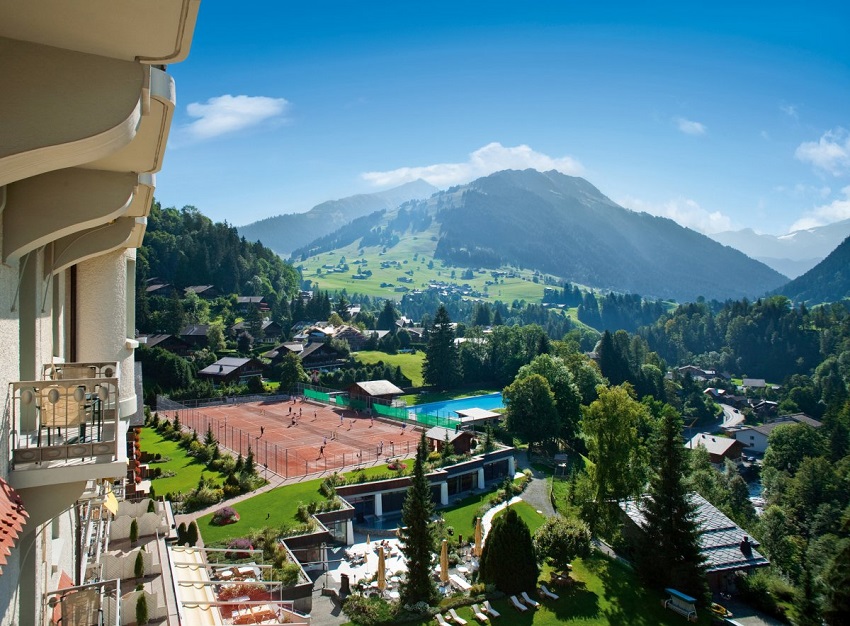 Roy Emerson, former No. 1 tennis player who has 12 Major singles titles and 16 Grand Slam tournament men’s doubles titles under his belt, started the Roy Emerson Tennis Weeks at the Gstaad Palace Hotel every summer, during which he himself teaches classes. The Gstaad Palace is also the site of the annual Allianz Swiss Tennis Open Gstaad, which attracts some tennis greats. 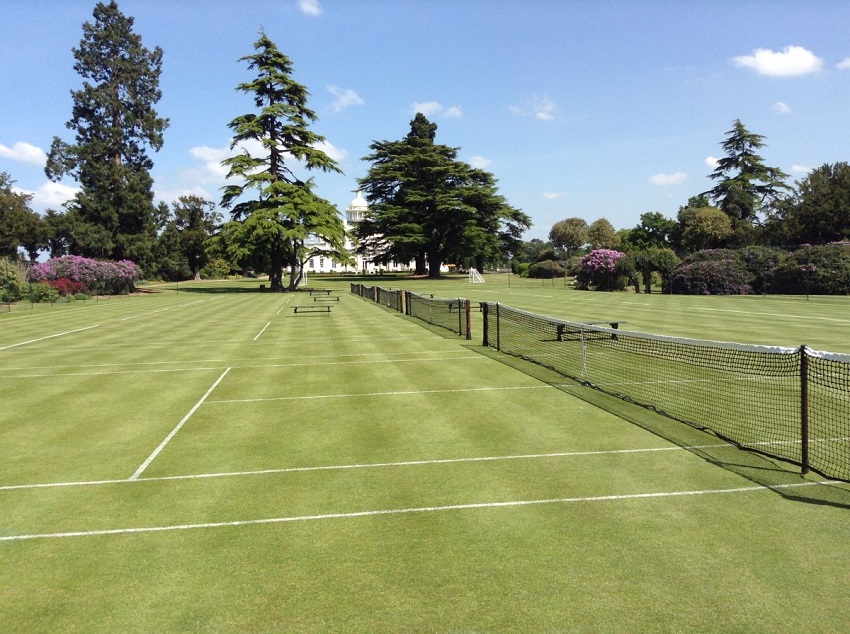 Boasting 13 grass, clay, and indoor courts, the main attraction at Stoke Park is The Boodles Tennis Challenge, which takes place a week before Wimbledon and is essentially a warm-up that sees tennis greats, like Novak Djokovic and Rafael Nadal, practicing for the big event. 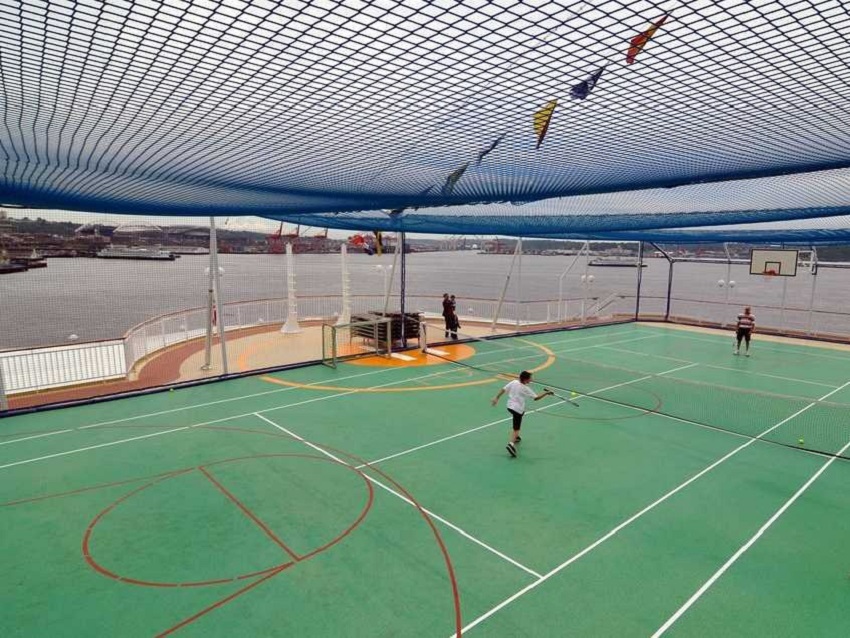 Play a round aboard the Norwegian Cruise Line’s MV Norwegian Pearl, which has a net-enclosed basketball/volleyball/tennis court on its top deck. When your game isn’t basking in the Bahamian sun, it’ll be surrounded by Alaskan glaciers as you cruise on by. 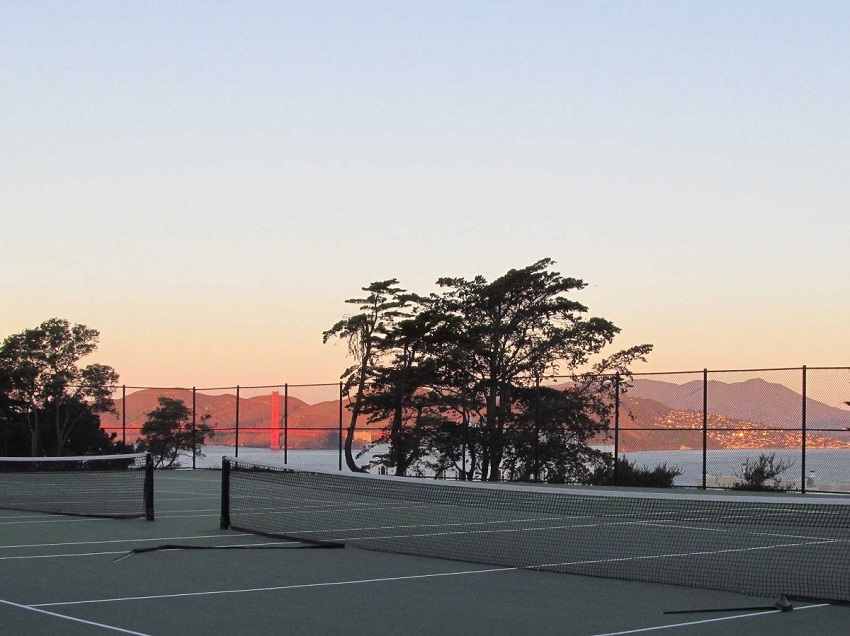 Disappointingly not made of marble, these courts are named after Alice Marble, the winner of 18 Grand Slam championships. Perched atop Russian Hill and part of the George Sterling Park, they offer sweeping views of San Francisco Bay and the famous Golden Gate Bridge. 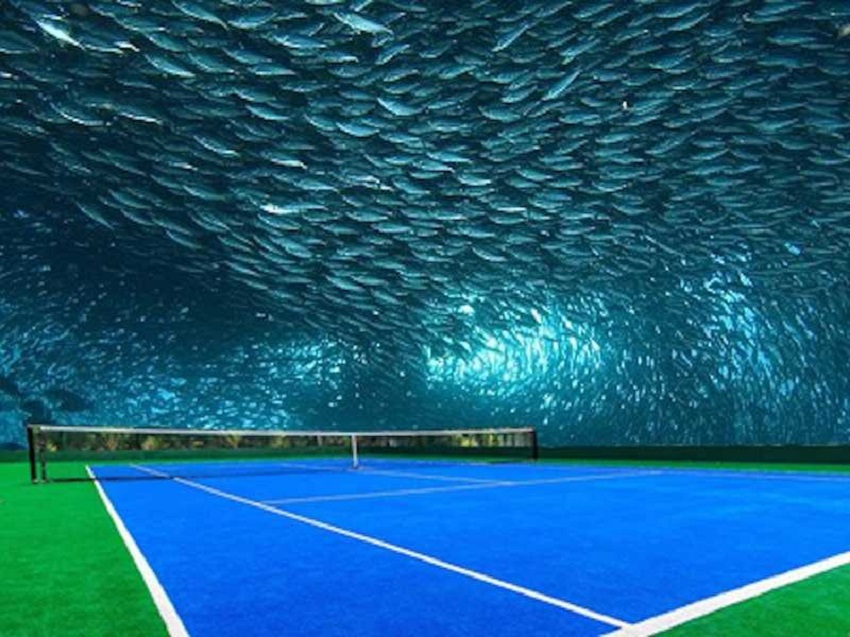 Courtesy of 8 plus 8 Concept Studio

Don’t get too excited, this is just a rendering. Polish architect Krysztof Kotala designed a seven-court underwater tennis complex for Dubai, just offshore in the Persian Gulf, in the hopes of attracting the next Grand Slam. However, with Dubai’s history of opulence and avant-garde designs, this might become a reality soon.

25+ Ancient Ruins You Should Visit In Your Lifetime

40 Easy DIYs That Will Instantly Upgrade Your Home

40 Easy DIYs That Will Instantly Upgrade Your Home