by Architect K.A.
Reading Time: 2 mins read
0 0
A A
7
SHARES
49
VIEWS
Share on FacebookShare on TwitterPin to Pinterest

The northern lights are no longer the dominion of cold-blooded Canadians or Japanese tourists trying to have a lucky baby: effective immediately, Think Geek is bringing aurora borealis to your breakfast table in the form of a 12oz, thermal-sensitive mug. Fill the mug with hot java, and watch the skies light up!

“Caffeine. It makes us light up. It excites us. The thought of that first cup of coffee can get us moving in the morning, literally and figuratively,” explains Think Geek.

“Much as caffeine particles pass into our bloodstream and make us bounce off walls, so, too, the particles from solar winds pass through the Earth’s magnetosphere near the poles and share energy, causing a spectacular display in the upper atmosphere. When these particles collide with oxygen at lower altitudes (up to 150 miles), the photon released appears green or yellow, giving a similar light to the one captured on this aurora borealis mug when you fill it with warm liquid.” 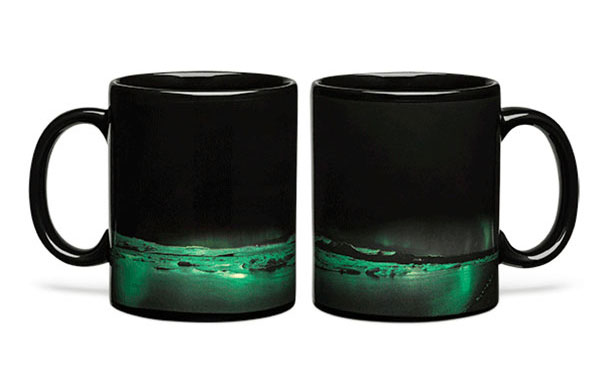 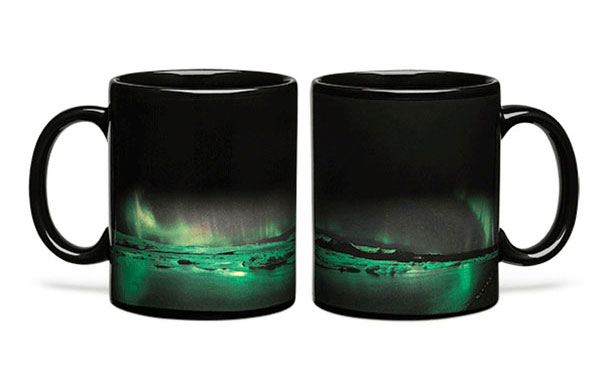 What Are Northern Lights?

The bright dancing lights of the Aurora are collisions between electrically charged particles from the sun that enter the Earth’s atmosphere. The lights are seen above the magnetic poles of the northern and southern hemispheres. They are known as ‘Aurora Borealis in the north and ‘Aurora australis’ in the south.

Auroral displays appear in many colors, although pale green and pink are the most common. Shades of red, yellow, green, blue, and violet have been reported. The lights appear in many forms, from patches or scattered clouds of light to streamers, arcs, rippling curtains, or shooting rays that light up the sky with an eerie glow.

Heartwarming Illustrations About The Love Between Dads And Their Little Girls

Artist Preserves The Beauty Of Nature In Pressed Glass Jewelry

Artist Preserves The Beauty Of Nature In Pressed Glass Jewelry