A World Heritage Site Railway Route Through The Swiss Alps

by Architect K.A.
Reading Time: 8 mins read
0 0
A A
19
SHARES
98
VIEWS
Share on FacebookShare on TwitterPin to Pinterest

Added to the list of World Heritage Sites in 2008, the Rhaetian Railway in the Albula / Bernina Landscapes brings together two historic railway lines that cross the Swiss Alps through two passes. Opened in 1904, the Albula line in the northwestern part of the property is 67 km long. 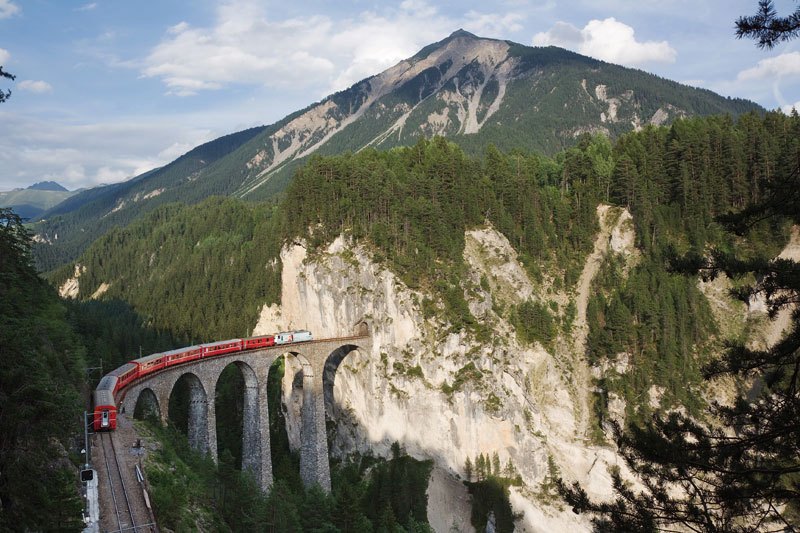 As per the World Heritage description page:

“The Rhaetian Railway in the Albula / Bernina Landscapes constitutes an outstanding technical, architectural and environmental ensemble and embodies architectural and civil engineering achievements, in harmony with the landscapes through which they pass.”

Below you will find additional information on this breathtaking railway route and more photos and reasons to add this to your bucket list. 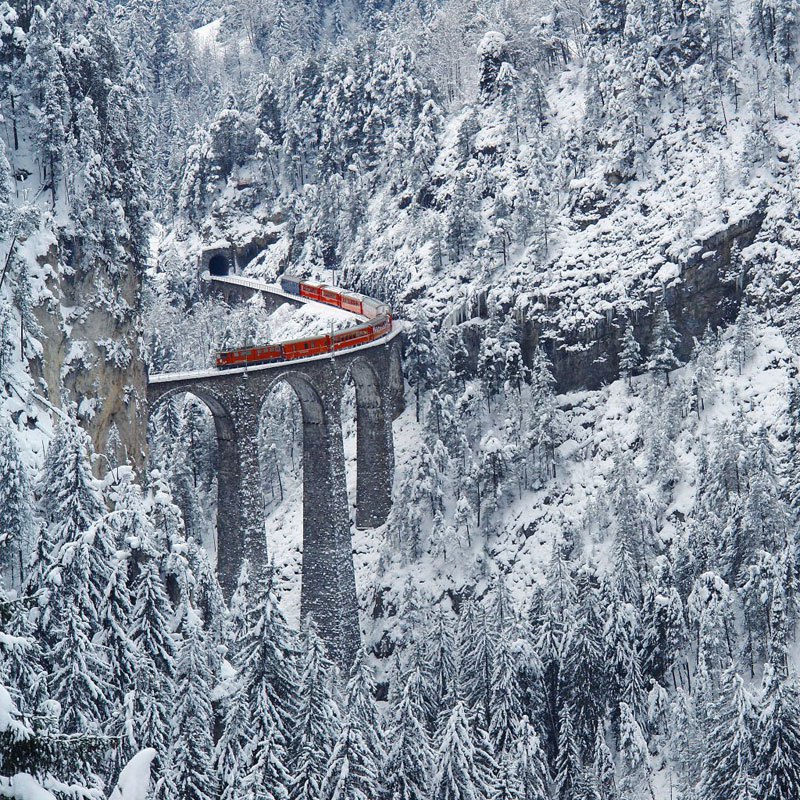 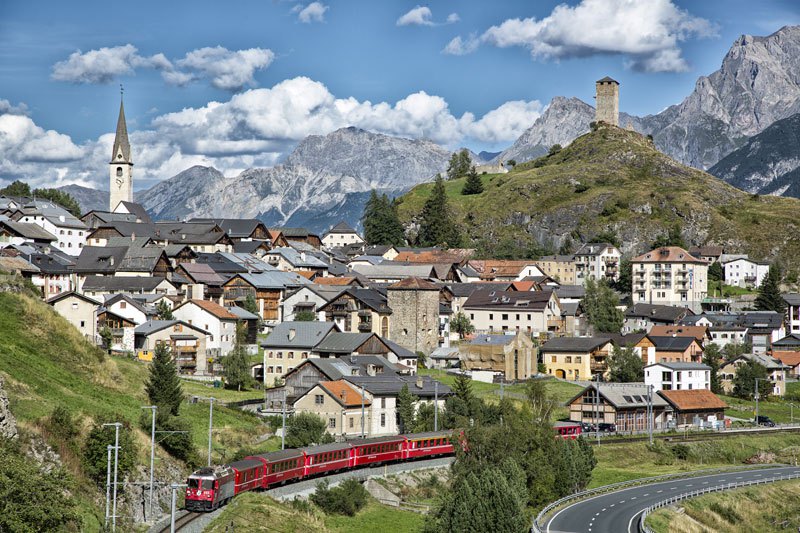 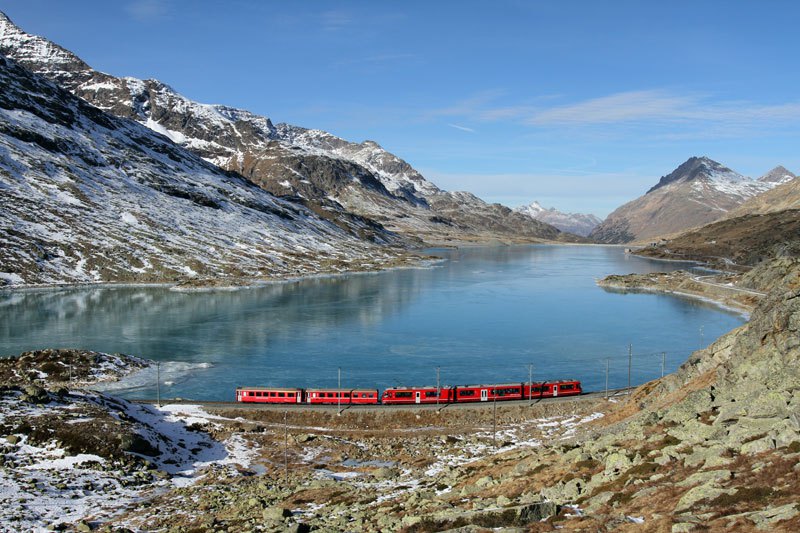 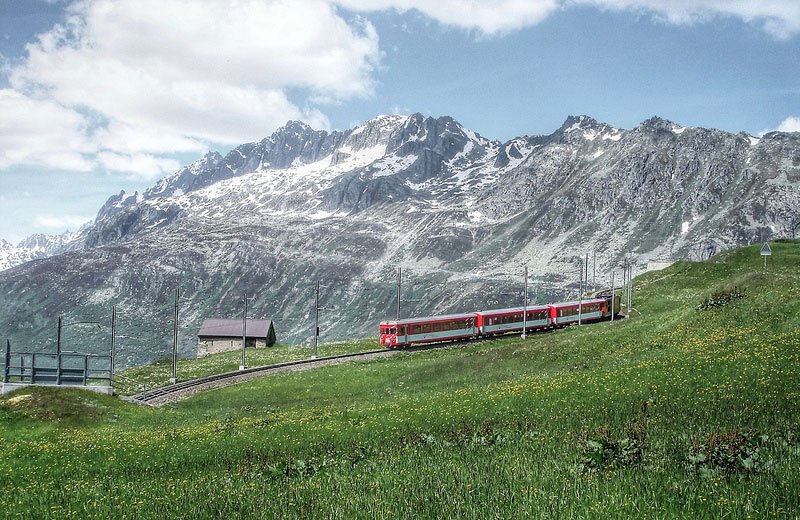 The Albula Railway is a single-track meter gauge railway line in the Canton of Graubünden, Switzerland. It links Thusis on the Hinterrhein (697 m (2,287 ft) above sea level) with the spa resort of St. Moritz in Engadine (1,774 m (5,820 ft) above sea level).

– The 5,866m (3.6 miles) long Albula Tunnel passes under the watershed between the Rhine and the Danube a few kilometers west of the Albula Pass. With its maximum elevation of 1,820 m (5,970 ft) above sea level, the tunnel is, after the Furka Tunnel, the second highest alpine tunnel in Switzerland

– Between Tiefencastel and Filisur, the train crosses the 35 m (115 ft) m high and 137 m (449 ft) long Schmittentobel Viaduct. Before the start of the Rhaetian Railway’s Filisur, it passes through one of the Railway’s trademarks: the Landwasser Viaduct, which is a 136-meter-long tunnel that runs through a cliff face. This curve, only around 100 meters from the cliff’s edge, leads directly into the tunnel.

– At Filisur station is the junction between the Albula Railway and the branch line from Davos Platz. Between Filisur and Bergün, the train ascends 292 m (958 ft) and runs through the first spiral tunnel. The Bergn-Preda section of the Albula Railway is regarded as the region’s most demanding section of rail technology.

It requires overcoming the height difference of over 400 meters between the two cities. This route is extended by 12 kilometers by various engineering structures, including four valley crossing viaducts, three spiral tunnels, and two curved tunnels. [Source] 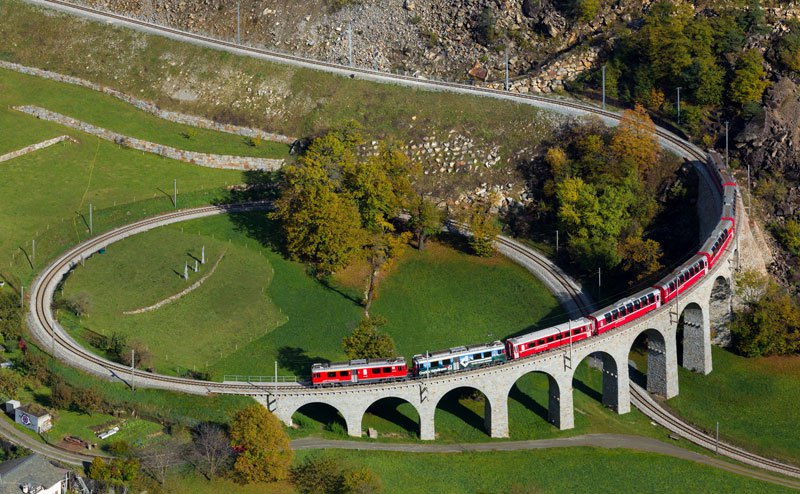 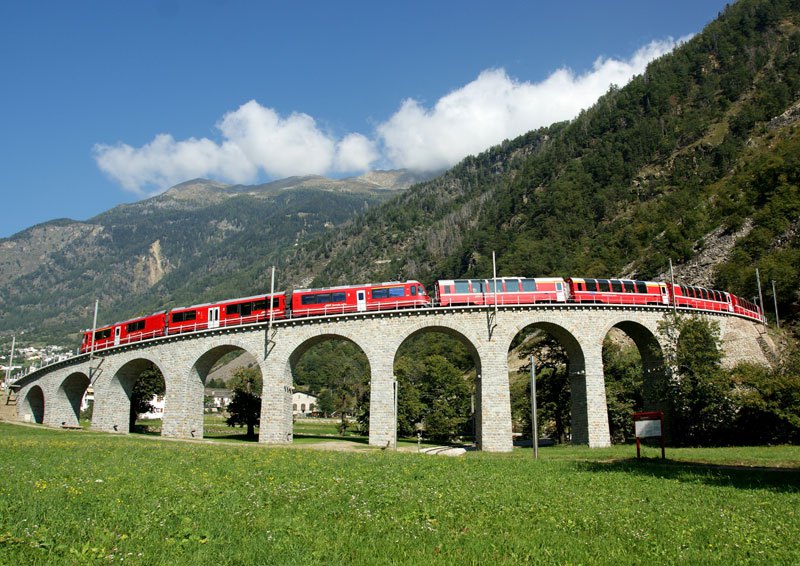 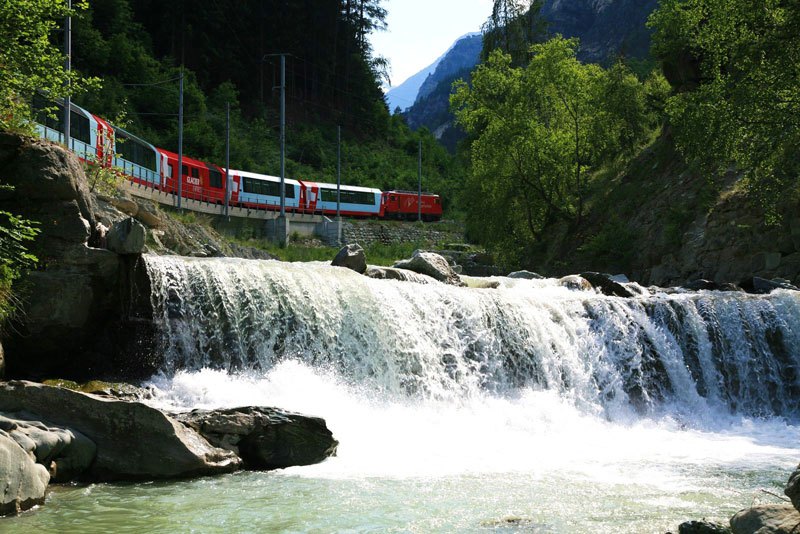 The Bernina Railway is a single track 1,000 mm (3 ft 3 3⁄8 in) meter gauge railway line forming part of the Rhaetian Railway (RhB). The Pass is a railway crossing that connects the town of St. Moritz in Switzerland and the province of Sondrio in Italy.

It is the highest point in Europe that a railway crossing can reach. It also has one of the world’s most challenging and elevated adhesion railways. The crossing’s height of 2,253 meters is over seven thousand feet above sea level. [Source]

– St Moritz is the terminus of the Albula Railway and the Bernina Railway. Different electrification systems power the two railways; they meet at the same station but operate on separate lines from separate platforms.

The Railway leaves St Moritz station in an easterly direction and crosses the Inn River on a 64 m (210 ft) long viaduct. It then passes through the 689 m (2,260 ft) long Charnadüra-Tunnel II, the longest tunnel on the entire route.

– Just past Morteratsch station is the world-famous Montebello Curve, where the line meets the road over the Pass. The line and the road will now accompany each other as far as Ospizio Bernina.

– Along the lake’s eastern bank and near Ospizio Bernina, Bernina reaches its highest point, at 2,253 m (7,392 ft) above sea level. The Railway is thereby (mountainside railways excluded) the most elevated railway line in the Alps, operating as a public railway with year-round traffic.

As the section from here to Poschiavo is particularly severely affected by drifting snow, countless engineering structures have been erected from the southern dam wall onwards. [Source] 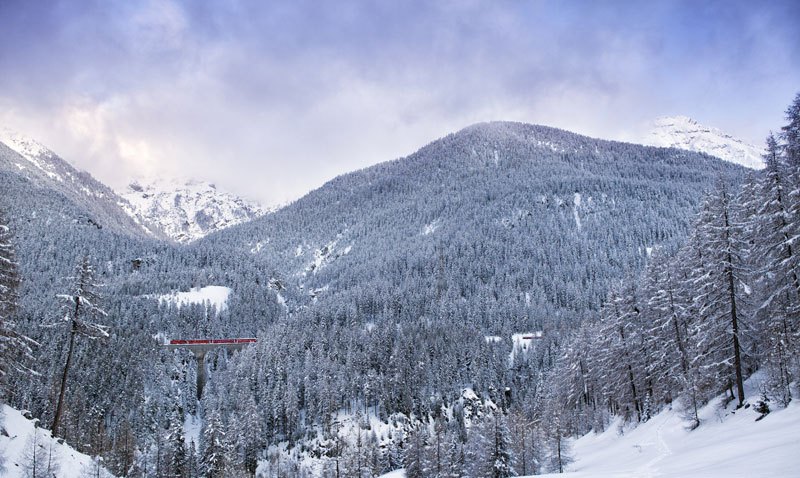 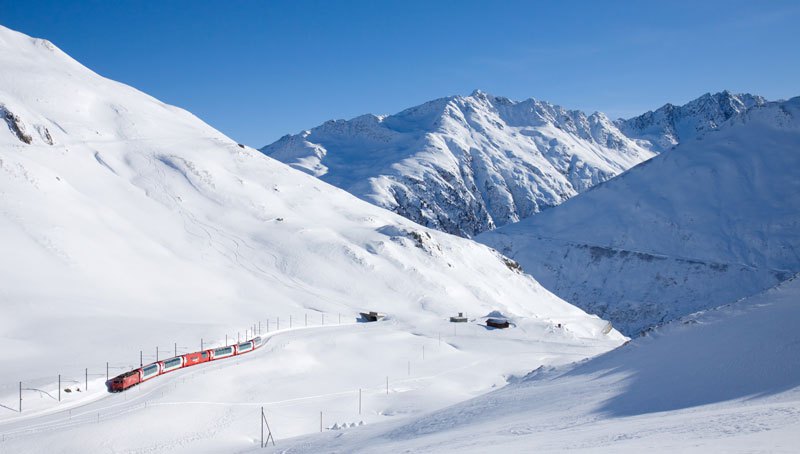 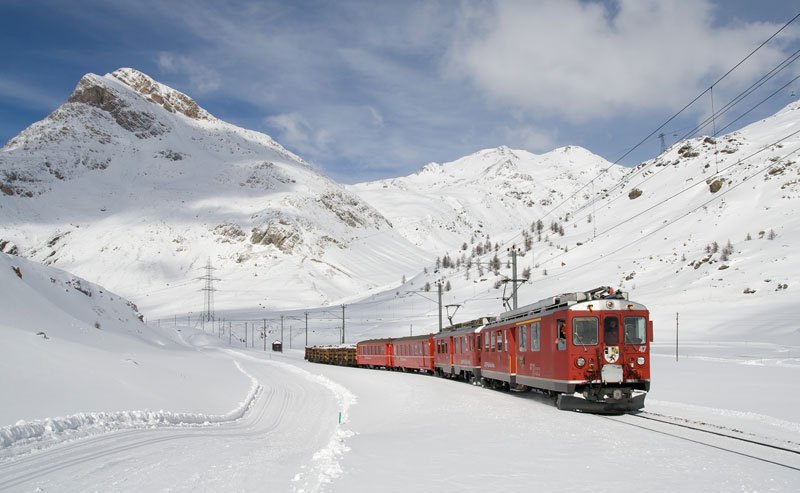 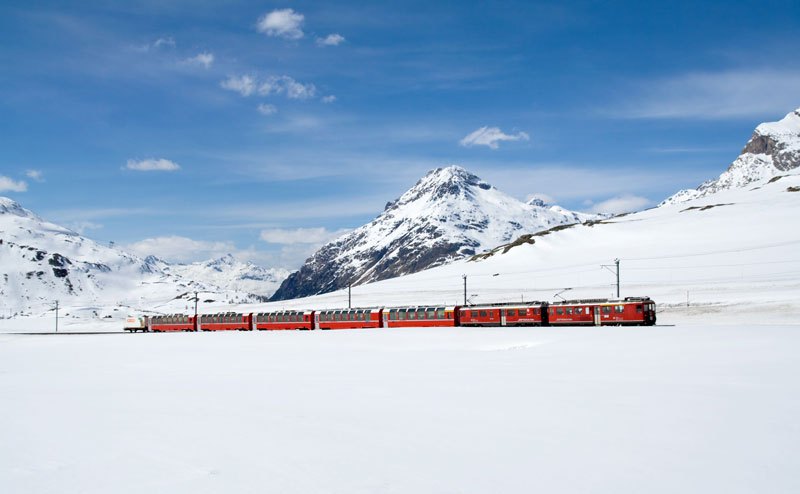 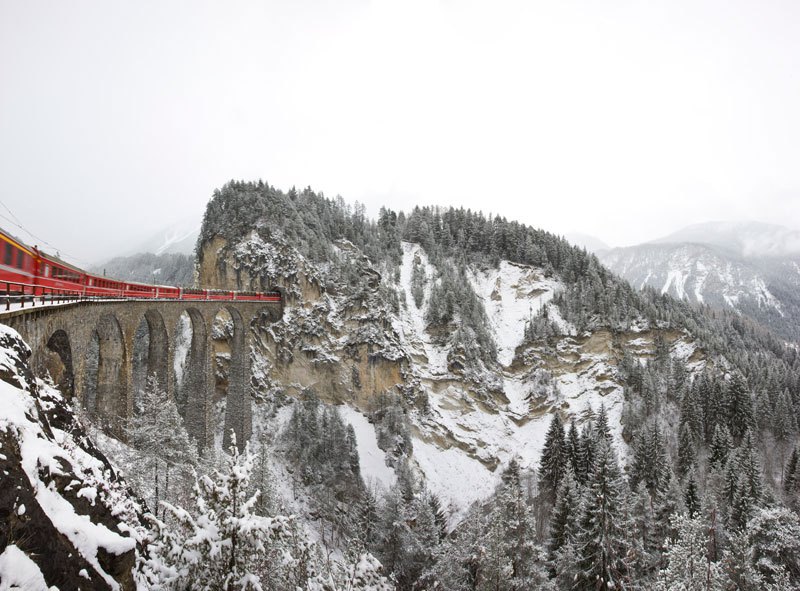 In 1930, the Glacier Express was an express train connecting the railway stations of St.-Moritz and Zermatt in Switzerland’s Alpine region. During its journey, the train makes its way through the Bernina Landscapes and the Albula Railway. It passes through a World Heritage Site known as Rhaetian Railway.

The train is not an “express” in the sense of being a high-speed train, but rather, in the sense that it provides a one-seat ride for a long duration journey. It has the reputation of being the slowest express train in the world.

The trip on the Glacier Express is a 7½-hour railway journey across 291 bridges, through 91 tunnels, and across the Oberalp Pass on the highest point at 2,033 m (6,670 ft) in altitude. The entire route is composed of a meter gauge railway. Some sections have a rack-and-pinion system that allows them to control the direction of the train as it approaches specific steep grades. [Source]

The Bernina Express is a train connecting Chur (or Davos) in Switzerland with Poschiavo and Tirano in Italy by crossing the Swiss Alps. For most of its journey, the train also passes along and through the World Heritage Site known as the Rhaetian Railway in the Albula / Bernina Landscapes.

The trip on the Bernina Express through this World Heritage Site is a four-hour railway journey across 196 bridges, 55 tunnels, and across the Bernina Pass on the highest point at 2,253 meters in altitude. The line is 1,000 mm (3 ft 3 3⁄8 in) (meter gauge). The Bernina Express uses gradients of 7% to negotiate the difference in the height of about 1800 meters from the summit at Ospizio Bernina to Tirano. [Source] 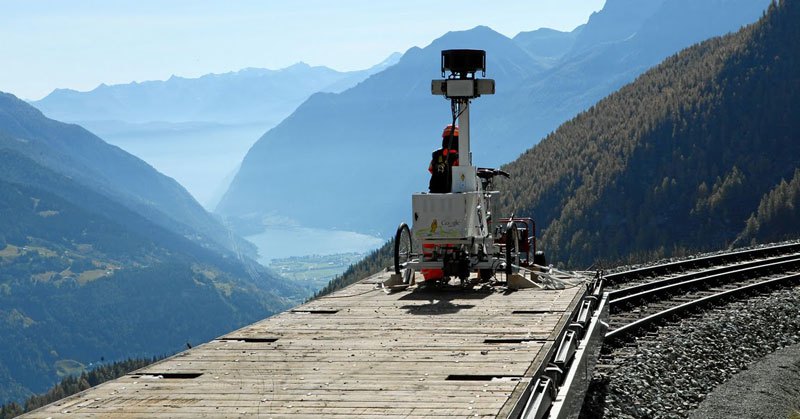 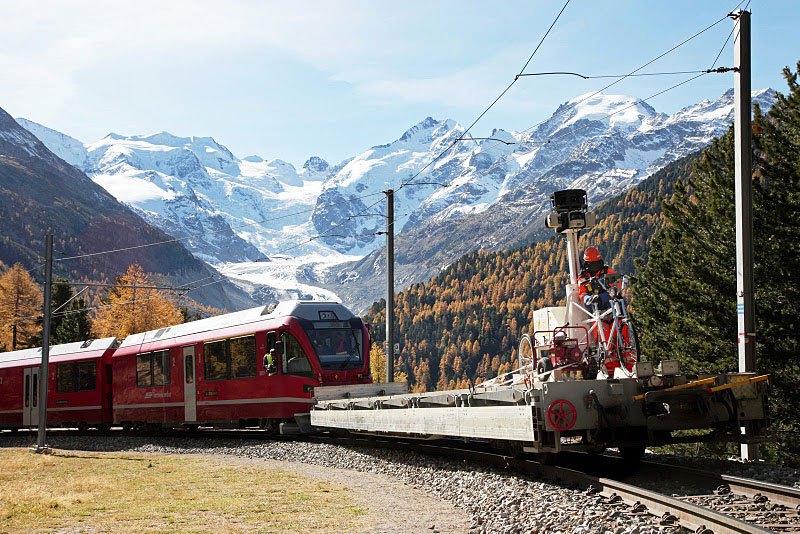 From 2011 – 2012, the Google Street View team captured 75.8 miles/122 km of the famous UNESCO World Heritage Albula/Bernina railway line. It was the first railway route in the world to get the Street View treatment. The Street View trike was connected to the front wagon of a Rhaetian Railway train. From the front of the train, the trike took 360-degree images along the expansive track. 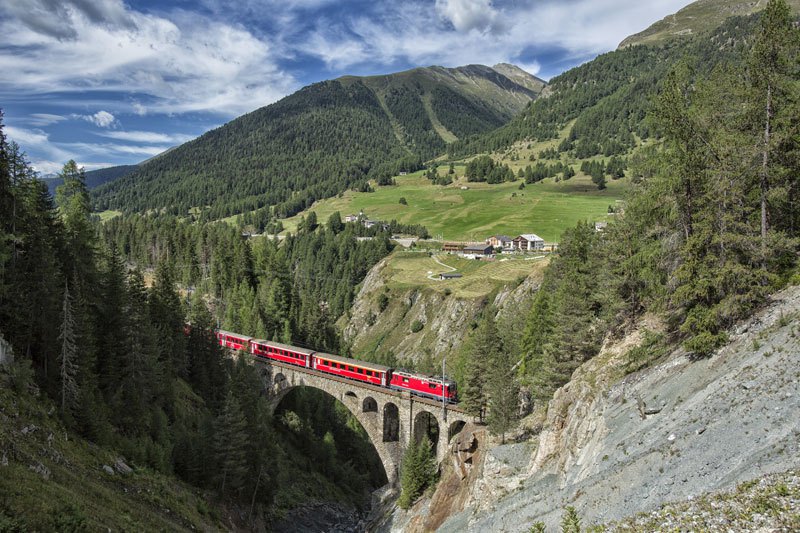 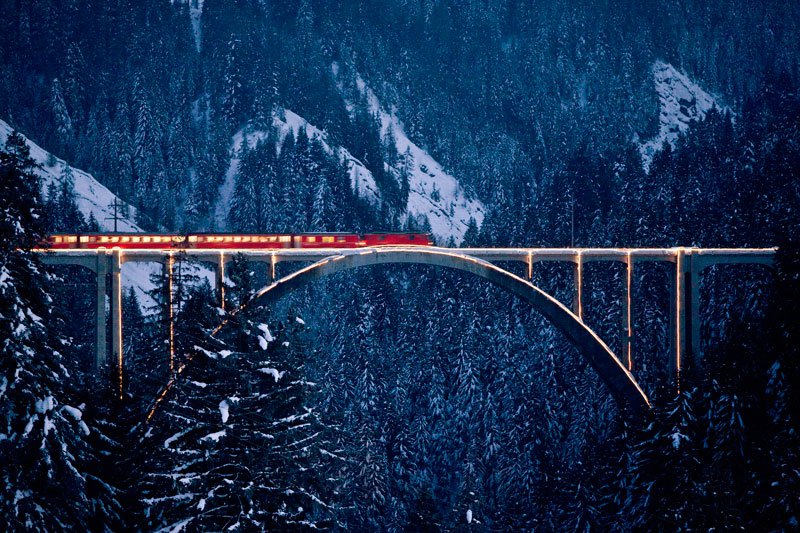 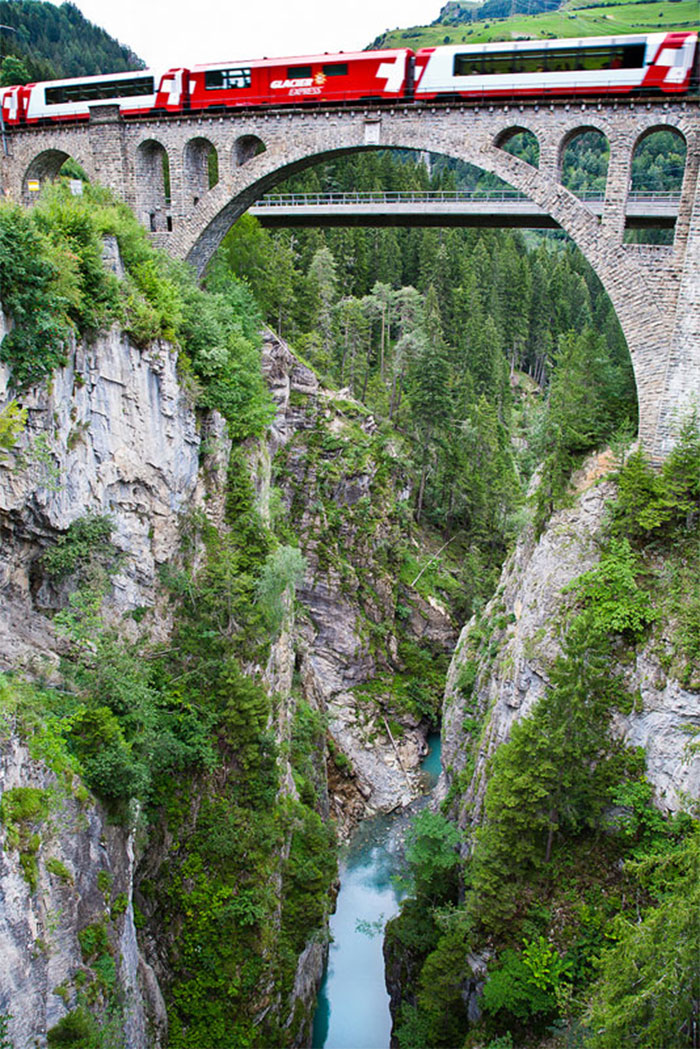 The World’s Largest Cruise Ship: Allure Of The Seas