by Architect K.A.
Reading Time: 22 mins read
0 0
A A
2
SHARES
93
VIEWS
Share on FacebookShare on TwitterPin to Pinterest

Australia is a country, and continent, surrounded by the Indian and Pacific oceans. Its major cities – Sydney, Brisbane, Melbourne, Perth, Adelaide – are coastal, but its capital, Canberra, is inland and nicknamed the “Bush Capital.” The country is known for its Sydney Opera House, Great Barrier Reef, the vast Outback (interior desert wilderness) and unique animal species including kangaroos and duck-billed platypuses. Source: Google

Australia is the flattest continent on Earth. So pretty dull right? 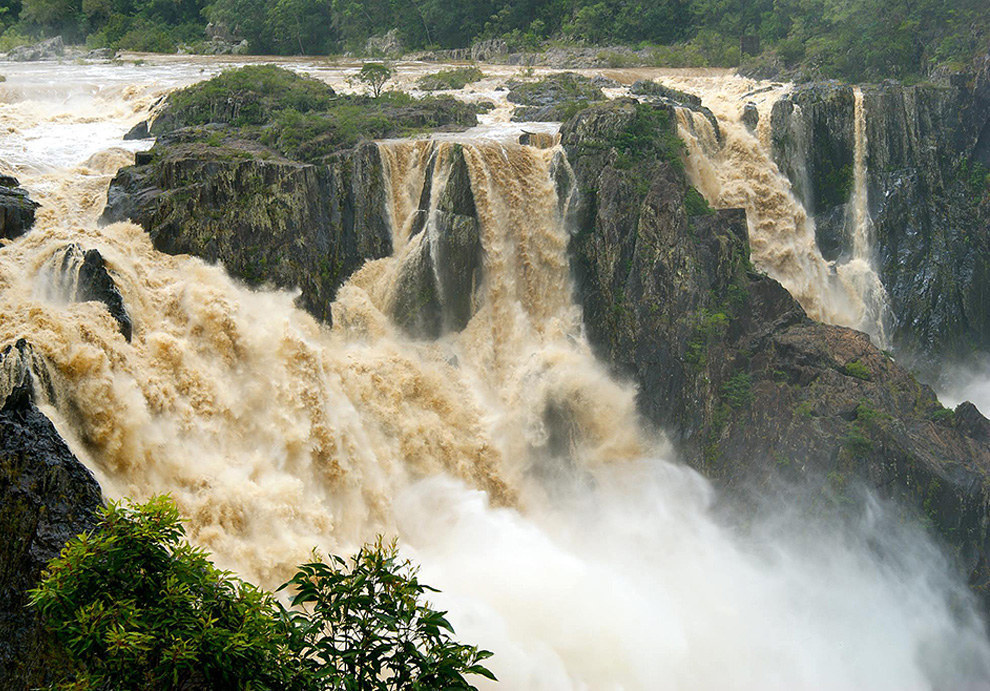 This may look like Africa’s famous rapids, but actually it’s the Barron Falls in Far North Queensland.

In the Wet Tropics World Heritage Area, the Barron Falls are the highlight of the Barron Gorge National Park. Not much more than a trickle for nine months of the year, the 125m (410ft) falls explode into life during the Big Wet (Dec-March). 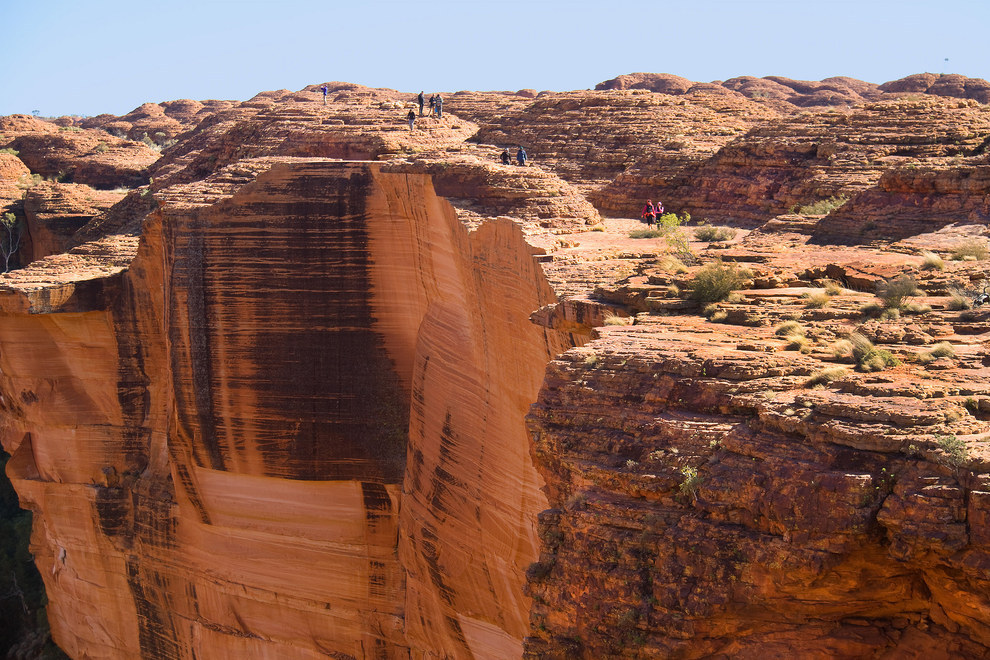 No that isn’t the ghost of Evel Knievel shaping up for one final jump, those are sightseers on the rim of the truly epic Kings Canyon in the Northern Territory.

The highlight of the Watarrka National Park, the sheer walls of Kings Canyon are more than 100m (325ft) high. Home to Luritja Aboriginal people for more than 20,000 years, the Canyon’s 6km Rim Walk is one of Australia’s most exciting strolls. 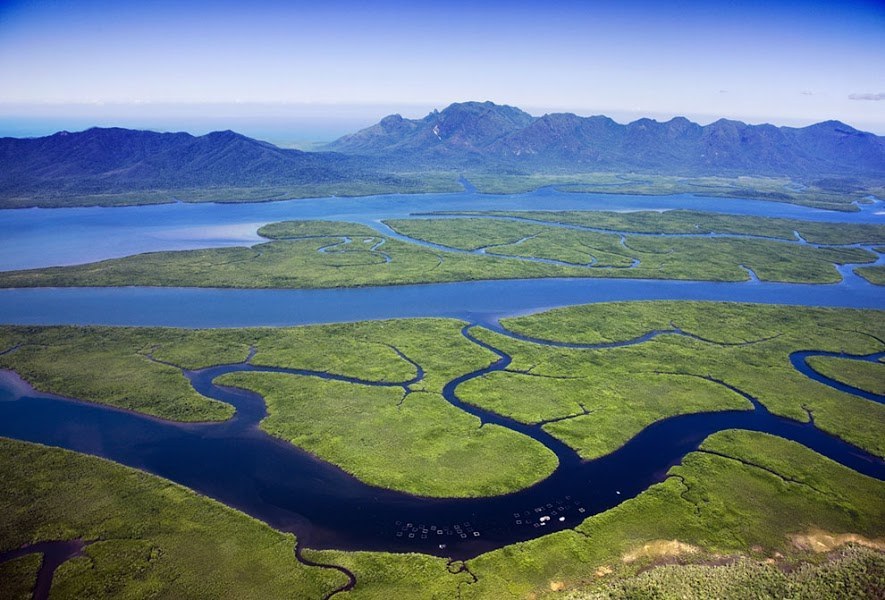 It might look the last refuge of the dinosaurs, but this is actually Hinchinbrook Island in Far North Queensland. 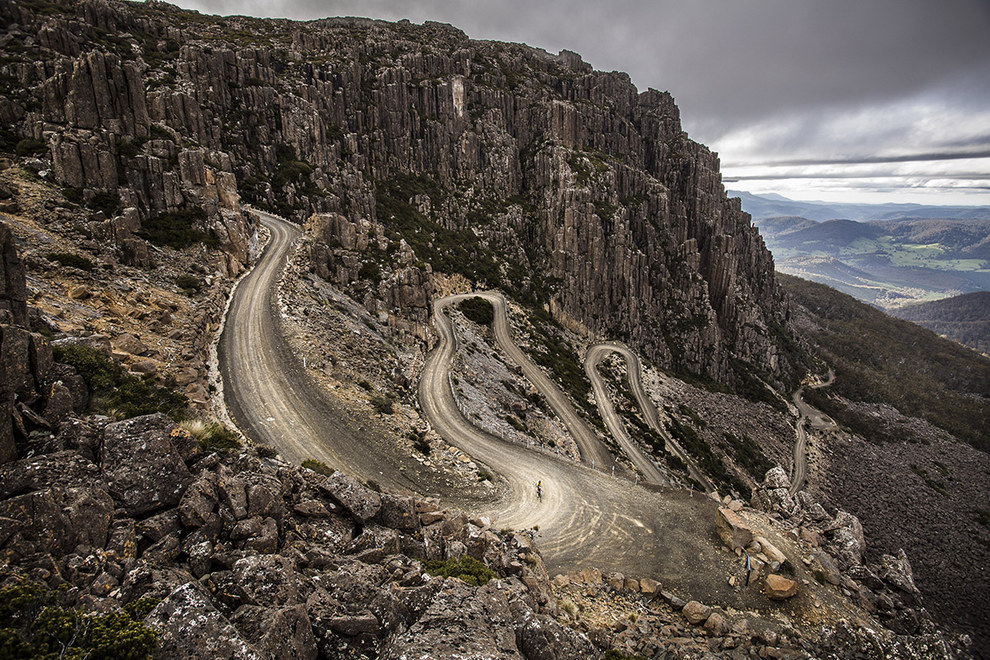 Cyclists are obsessed by these “must-ride” alpine switchbacks, but actually this is Jacob’s Ladder in Tasmania, not Le Tour de France’s most legendary climb.

“The most amazing road in Australia, hands down” according to photographer Beardy McBeard, unsealed Jacob’s Ladder climbs to the summit of Ben Lomond National Park in northern Tasmania, and everyone takes the same pic.

5. The Cliffs of Moher, Ireland? 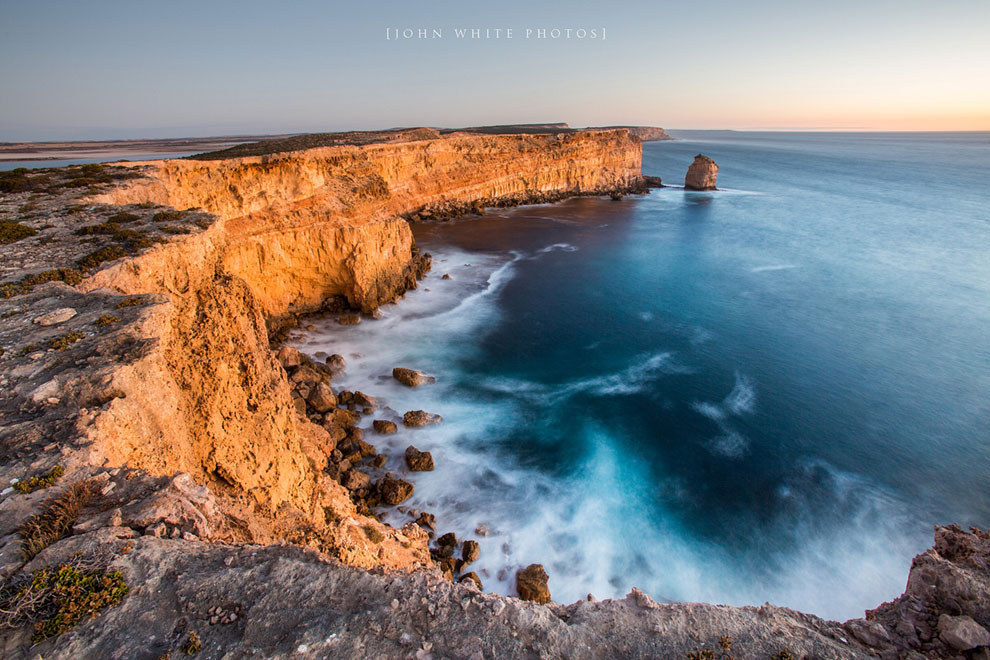 SA’s seriously epic Eyre Peninsula has more than 2,000km of coastline and some of the nation’s most dramatic sea cliffs. Offshore are colonies of seals and sea lions, and Australia’s biggest Great White Sharks.

6. The Old Man Of Stoer, Scotland? 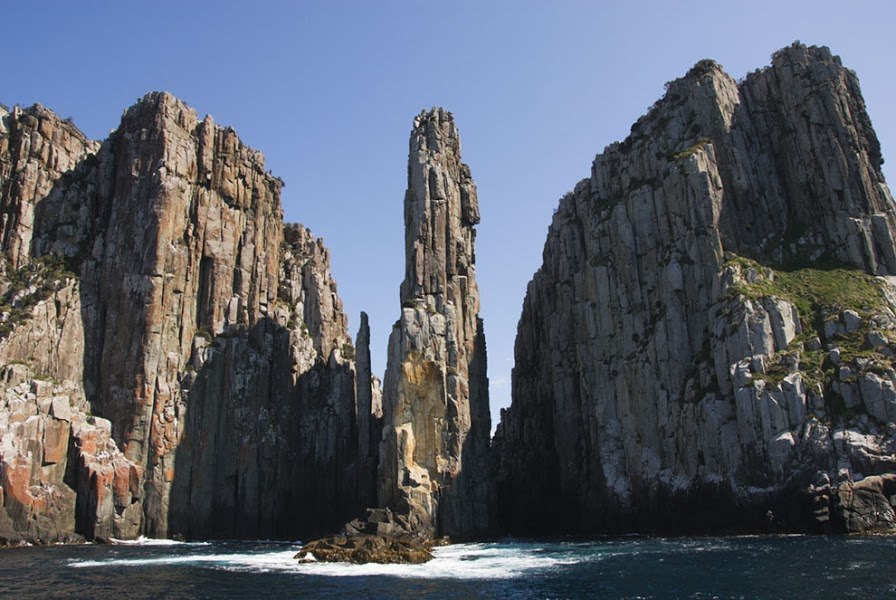 The coastline is at least as crazy as Scotland’s wild north-west, but this is actually The Totem Pole and Candle Stick in Tasmania.

Located within the Tasman National Park, the breathtaking 300m (1000ft) high cliffs of Cape Hauy are best viewed by boat: some brave, crazy people rock climb to the top! 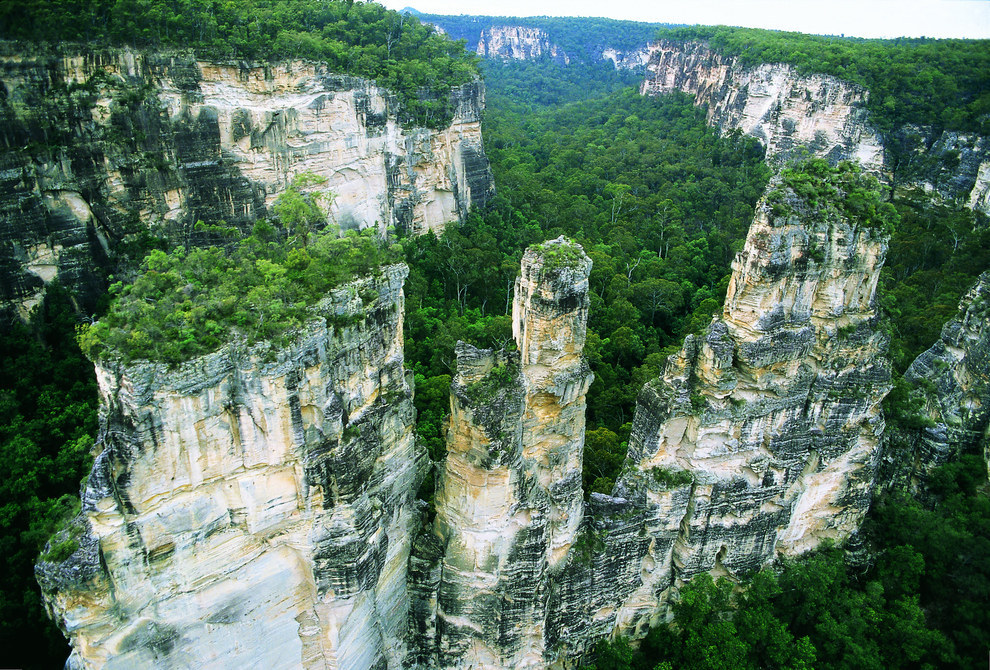 This might look like the biggest canyon in the world, but actually it’s just the biggest in Oz, Carnarvon Gorge in Queensland. 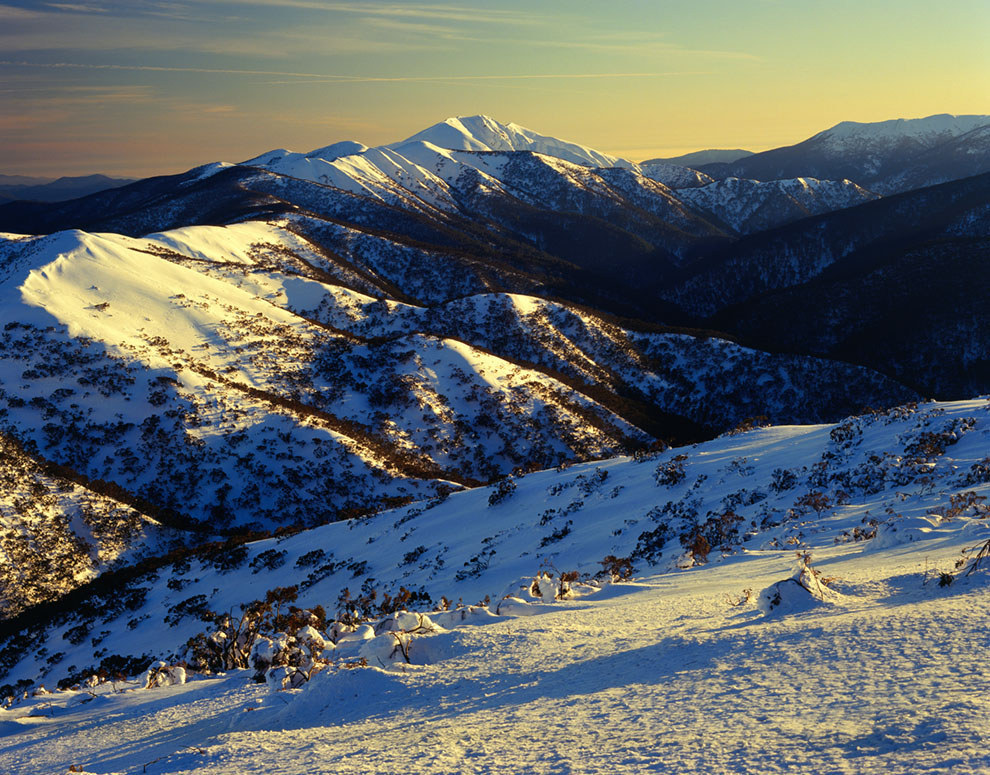 Well yes. This is sunrise on Mount Feathertop in Victoria’s Alpine National Park.

At 1,922 metres (6,306 ft), Mount Feathertop in the Australian Alps is the second-highest mountain in Victoria. Covered in snow from June to September, it’s popular with back-country skiers and snowboarders. 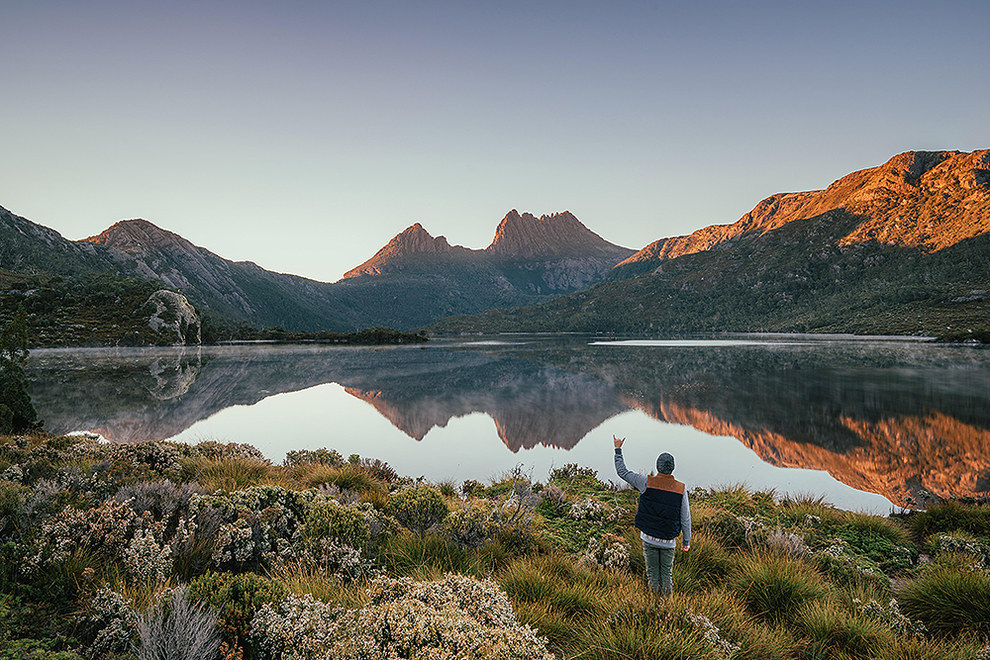 Tasmania’s landscapes feature more exposed dolerite than anywhere else on Earth. Dolerite is the rock that shaped the jagged and mountainous landscapes which have made Cradle Mountain-Lake St Clair National Park world famous. 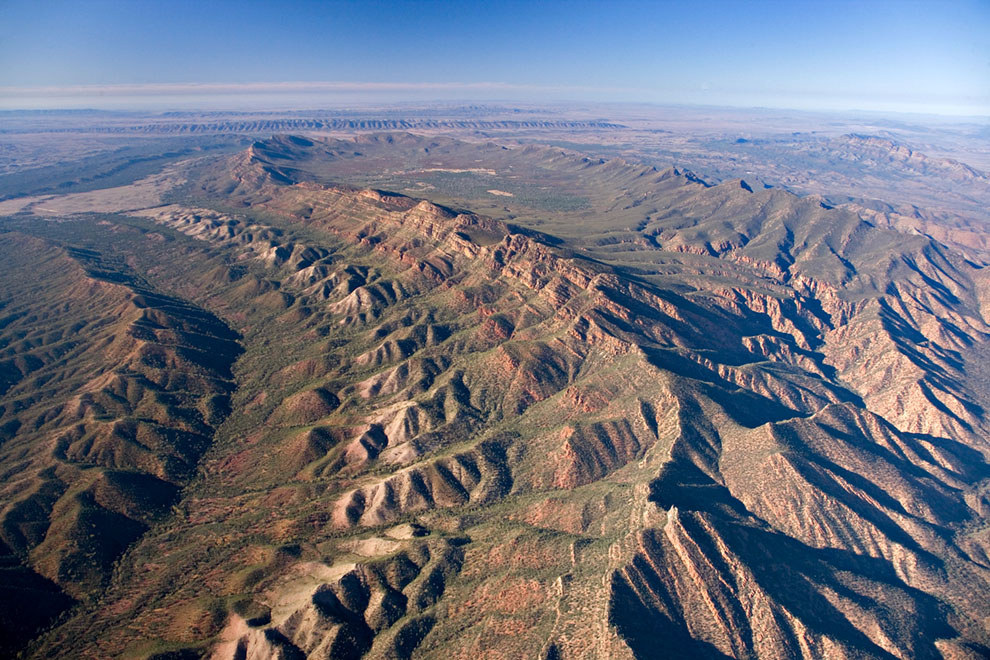 No, this isn’t the French-Spanish border, it’s actually the stunning ridge of Wilpena Pound in the Flinders Ranges, South Australia.

Rising out of the bush in outback SA, the spectacular Flinders Ranges are the product of millions of years of erosion, perfectly summarised by the German-born Australian artist Hans Heysen as “the bones of the earth laid bare”.

No, these are not Danxia Landform Geological Park’s famous painted cliffs, this is Western Australia’s beautiful Bungle Bungles.

The highlight of Western Australia’s Purnululu National Park, the 350 million year old Bungle Bungle Range has been an important spiritual place for Indigeous Australians for 40,000 years, but was only “discovered” by the outside world in 1983. 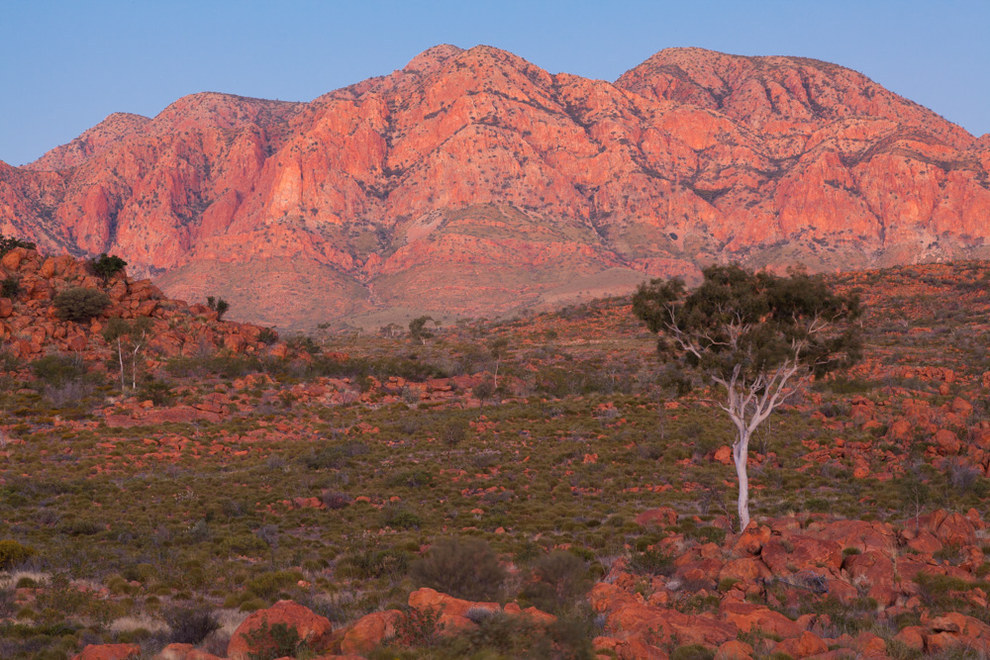 This may look like the Wild West, and you might not be that surprised to see The Lone Ranger trotting into the shot, but it’s actually Mount Giles in the Northern Territory.

The six day 224km Larapinta Trail along the MacDonnell Ranges is one of Australia’s great wilderness treks. One of the highest peaks in Australia’s Red Centre, 1,389m (4,555ft) Mount Giles dominates Ormiston Pound, a spectacular ring of mountains.

Think you know your Sierra Nevada’s? Wrong again, this is actually the Stirling Ranges in Western Australia.

Bluff Knoll in Western Australia’s Stirling Range National Park is one of the few places in WA to experience regular winter snowfalls. 1,099 metres (3,606 ft) above sea level, the region’s Aboriginal name is Koi Kyeunu-ruff: “the place of ever moving fog and mist”. 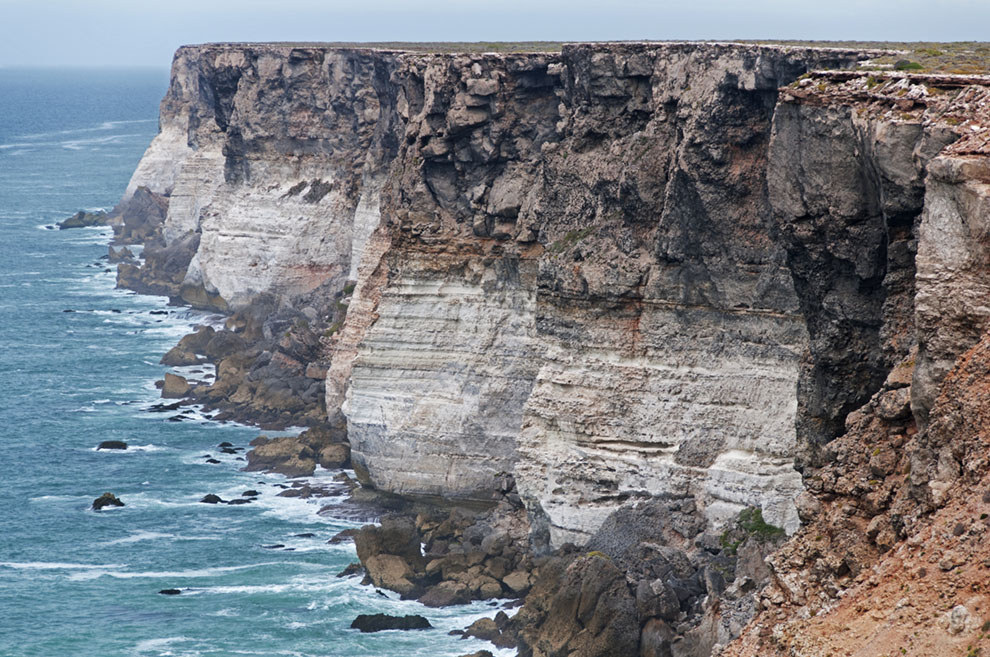 Often described as “The End of the World”, the Bunda Cliffs run more than 100km along the Great Australian Bight, and are thelongest uninterrupted line of sea cliffs on Earth. They fall dramatically into the Southern Ocean from the Nullabor Plain.

Similarly spectacular, but actually this is the Sea Cliff Bridge on the Grand Pacific Drive from Sydney to Wollongong.

The Sea Cliff Bridge in northern Illawarra was built after the old road was closed by rock falls. NSW’s Pacific coastline is wild and rugged, particularly immediately north and south of Sydney. 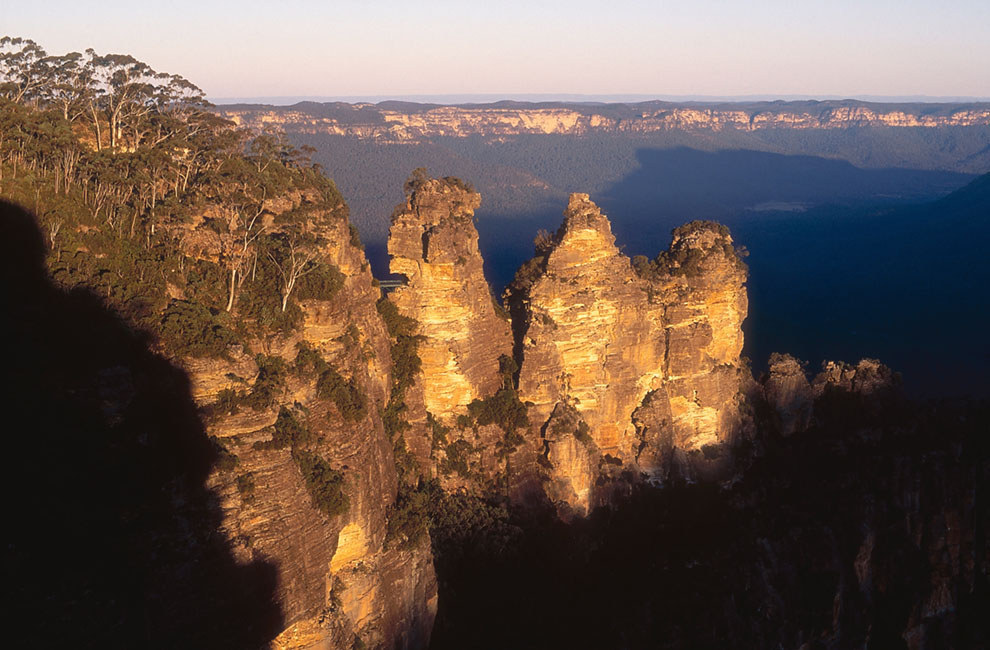 You won’t see any wildebeest migrating here sadly: this is the Blue Mountains in New South Wales.

Named after the eucalyptus mist they are shrouded with in summer, these iconic hills are often blanketed with mist. Part of the Great Dividing Range, the Blue Mountains stretches 95km (60 miles) and features gorges up to 760m (2,490ft) deep.

600km off the New South Wales coast, volcanic remnant Lord Howe Island is a nature lovers paradise, with amazing scuba, snorkeling and bird watching, natural forest and amazing trails to explore. Towering over it all is 875m Mount Gower (2,870 ft).

Isn’t that the Christ the Redeemer statue in Rio? Nope, this spectacular shot is actually a combination of really clever photography and the amazing Arthur Ranges in the Tasmanian Wilderness Heritage Area.

Some of Australia’s most stunning World Heritage-listed wilderness, the Arthur Ranges in south west Tasmania are as wild, desolate and beautiful as it gets. Also, do yourself a favour and follow Chris Wiewiora on Instagram. His shots are amaze.

They’re pretty amazing, but these are actually the Jim Jim falls in the Northern Territory.

Plunging 200m (660ft) in a single drop during the Top End wet season, the mighty Jim Jim Falls in the vast Kakadu National Park are best viewed from the air: during the tropical summer it is impossible to reach them any other way.