by Architect K.A.
Reading Time: 8 mins read
0 0
A A
6
SHARES
167
VIEWS
Share on FacebookShare on TwitterPin to Pinterest

Sustainable architecture needs quality and comfort which is very important for the life worldwide. Constructing materials are different but there are several basic ones that stayed for centuries. Such are clay bricks.

Columbia and other warm countries have a lot of difficulties with the hot weather. That’s why the Architects Miguel Niño and Johanna Navarro formed the Sumart Diseño y Arquitectura SAS studio that has a main goal to develop Sustainable Architecture solutions.

Bloque Termodisipador BT is their famous solution which is actually a clay brick that has irregular shape and protects the house of the heat. Solar radiation is high and the transfer of the heat is avoided in huge level by using this type of bricks in construction. 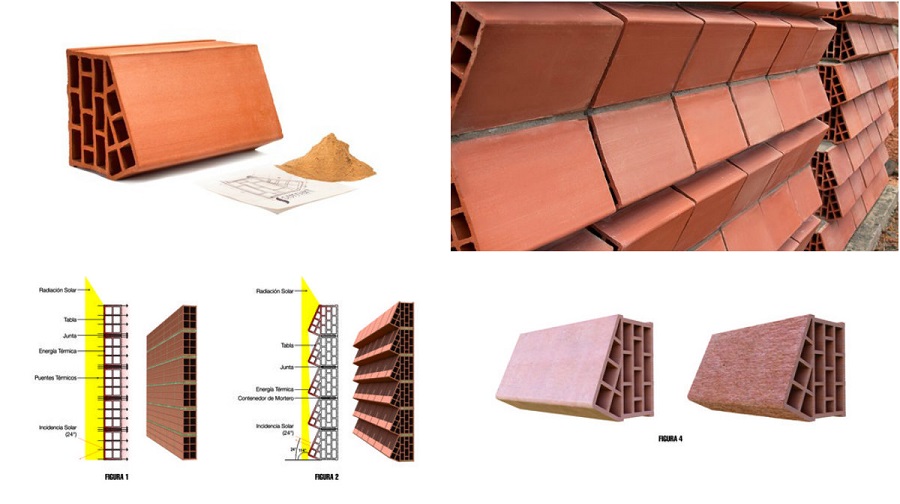 There are several types of these bricks and they are all looking like geometrical figures. Actually a rectangle and some type of triangle are mixed for better effect in the home interior. Many channels are used for the shape so the heat has several tunnels to pass till it gets to the interior of the house. That’s why this cooling system is functioning that well.

Those triangles has less exposed surface on the sun so they don’t get too much heat. The irregular form is also good sound isolation so the noise is turned on minimum. 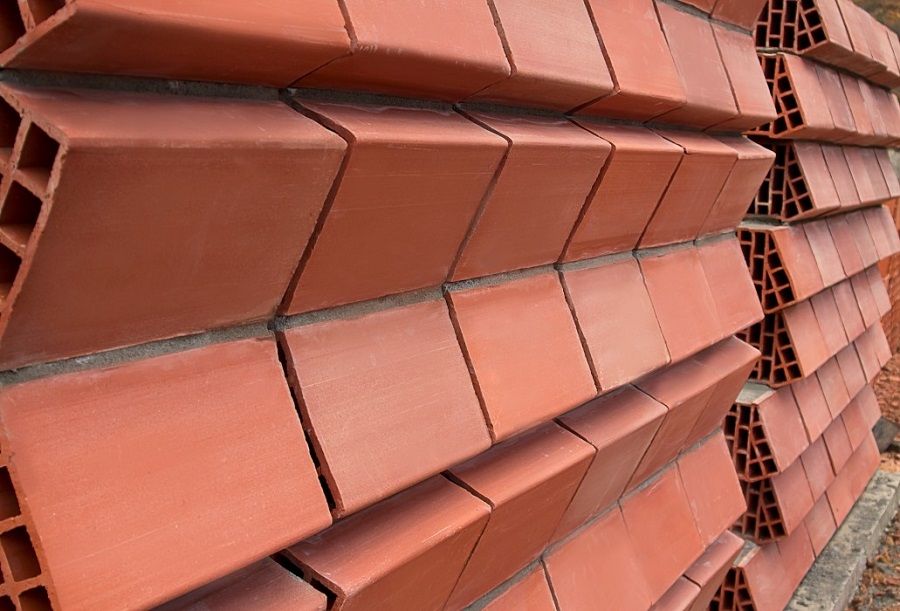 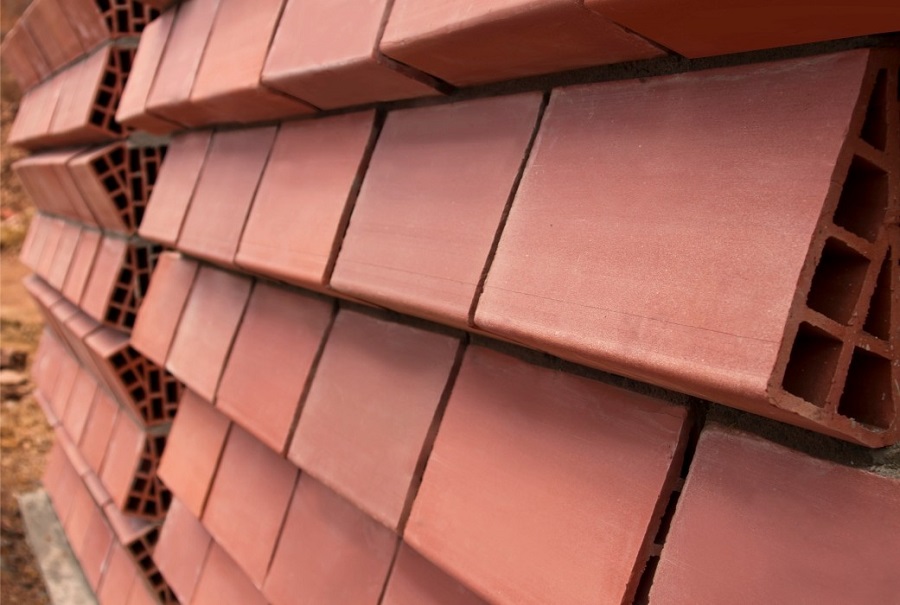 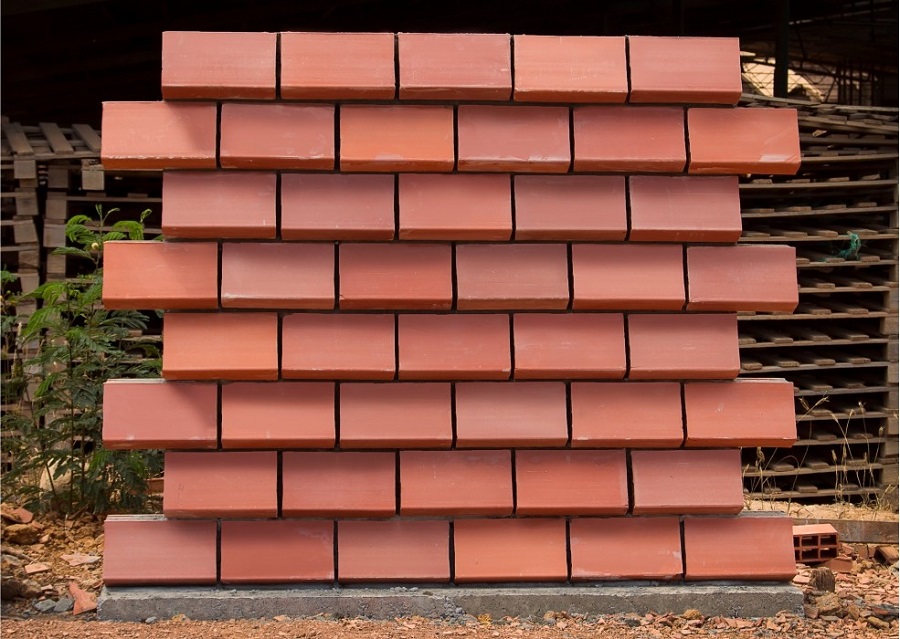 The top of the block holds the mortar so it also avoids wasted materials.  The UV rays are this way redirected from the ground. The natural finish that those bricks give to the façade also protects the owners of giving extra money for façade building. Those bricks on the way they are installed look very unique and interesting so the façade is already made with the building of the building. Those facades will be used a lot when the effects of the sustainable architecture will be shown and practically confirmed of the owners.

Step By Step Details Applied On A Project:-

With the goal of harnessing and exploring the benefits of clay as a raw material, which is characteristic of Colombia’s Cúcuta region, Architects Miguel Niño and Johanna Navarrocreated Sumart Diseño y Arquitectura SAS, a studio that designs and develops sustainable architectural solutions.

One of their most successful projects is the Bloque Termodisipador BT, a ceramic block designed with an irregular cross section that allows ventilation to pass through the brick, reducing the amount of heat that enters the interior of the building

Description from the architects:

The worldwide rise in the need for housing is undoubtedly one of the largest demands for sustainable architecture in the new century.  Designing and constructing for comfort and quality of life is a fundamental part of architectural production of the times, and while living conditions have changed, some materials have stayed the same as they have always been. 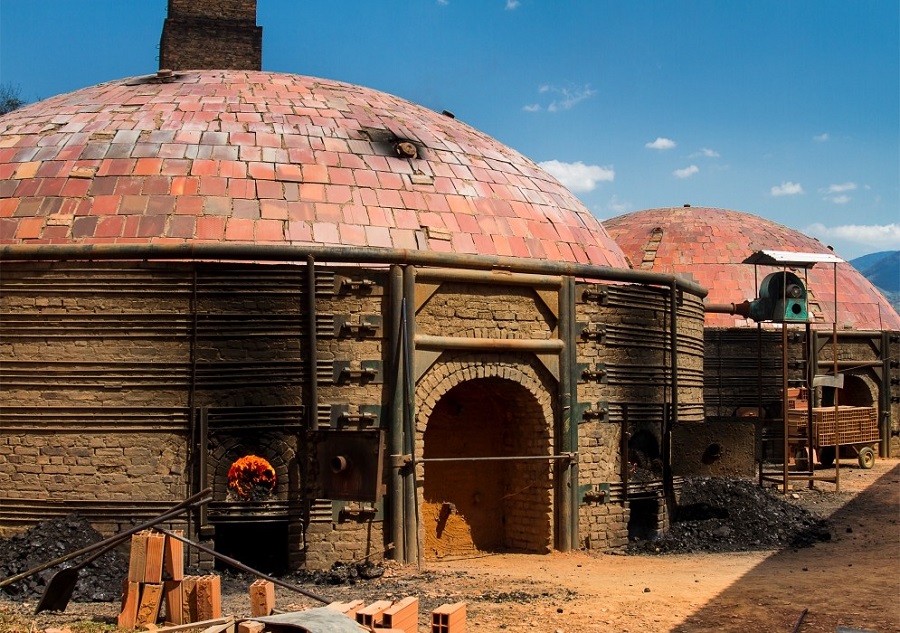 The traditional clay brick was the starting premise for designing a utility model that would provide new solutions to four shortcomings currently present in construction in Colombia:

BT – Bloque Termodisipador is a ceramic brick for the construction of architectural enclosures and facades, which adopts the same manufacturing process of the traditional fired clay brick, with an innovation in the design of the cross section used in the extrusion process. Its unusual shape, made up of a rectangle and an irregular scalene triangle, partially protects the brick from solar radiation and the transfer of heat. 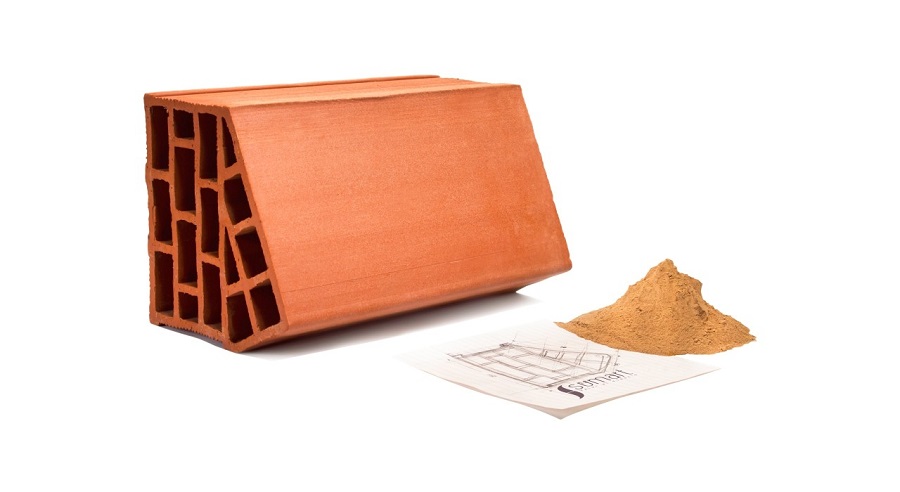 The separation between the blocks, combined with the channels that make up the irregular scalene triangles, allows ventilation to pass through the bricks, quickly dissipating the stored heat and reducing the amount of thermal energy emitted into the interior of the building. 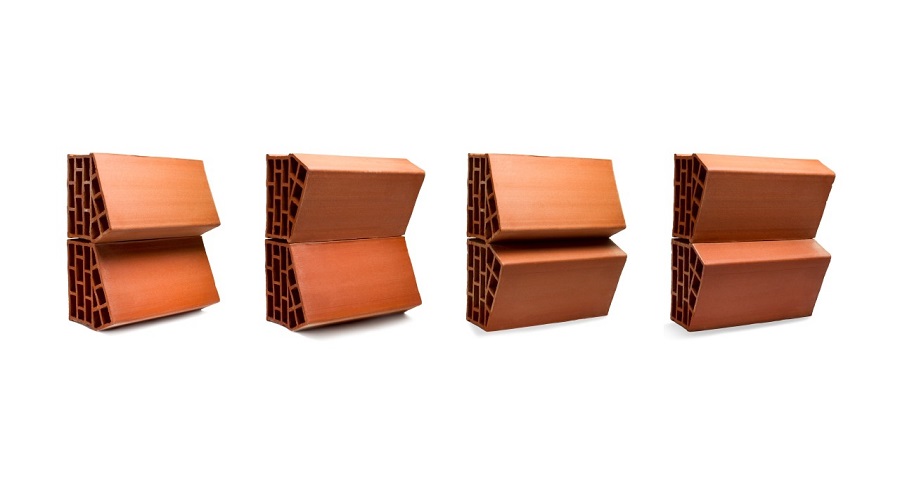 The scalene triangle has a 114° angle on its exterior, the opposite angle of solar radiation during maximum sun exposure (24°). Its irregular shape allows for countless three-dimensional aesthetic compositions that also deflect sound, reducing the amount of noise entering the interior.

A space on the top of the block is made to hold the mortar, making it so the mortar level is almost the same for each brick, avoiding wasted materials and placement errors. 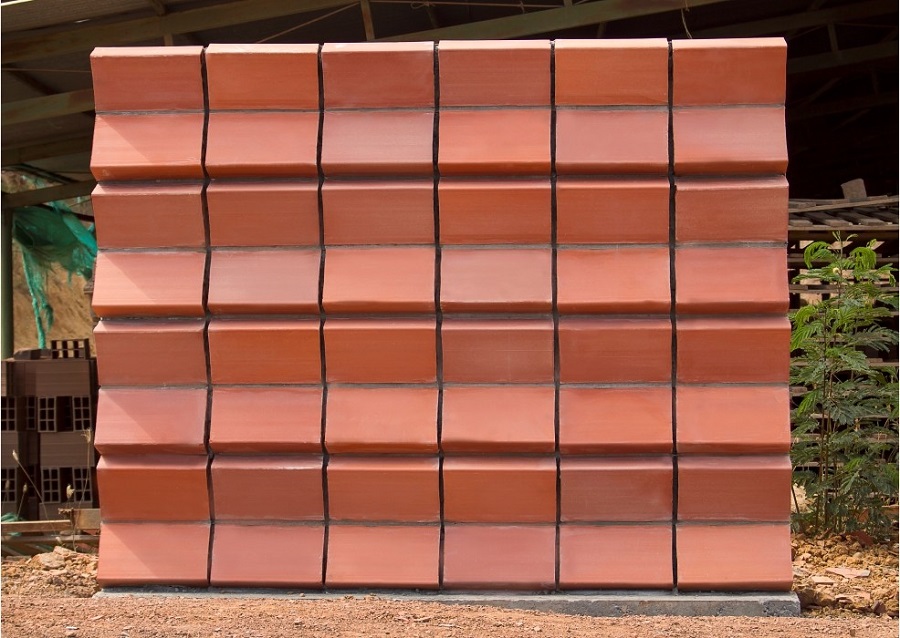 – Traditional fired clay bricks, used for facades, tend to be rectangular, causing the entire wall to be exposed to solar radiation for long periods of time. The radiation that is absorbed is transformed into thermal energy and accumulates in the walls, which in turn allows some of the heat inside (FIGURE 1). That’s why BT – Bloque Termodisipador adopts the same extrusion production process, but takes on its own unique shape (FIGURE 2), which partially protects the wall from solar radiation and the transfer of thermal energy. The channels that make up the irregular triangle allow ventilation to pass through them, quickly dissipating the temperature of the brick, and reducing the amount of heat transmitted inside (FIGURE 3).

– The surface of traditional fire clay bricks is flat, and walls built with these are placed perpendicular to the earth, turning the facade into a refractive surface that directs solar radiation to the ground.  (FIGURE 1). The surface of the BT – Bloque Termodisipador, is made out of an irregular triangle, where the longest side has a 114° angle, an angle that faces solar radiation in the maximum amount of sunlight (24°). This angle allows the UV rays to be redirected upward and not to the ground. (FIGURE 2) 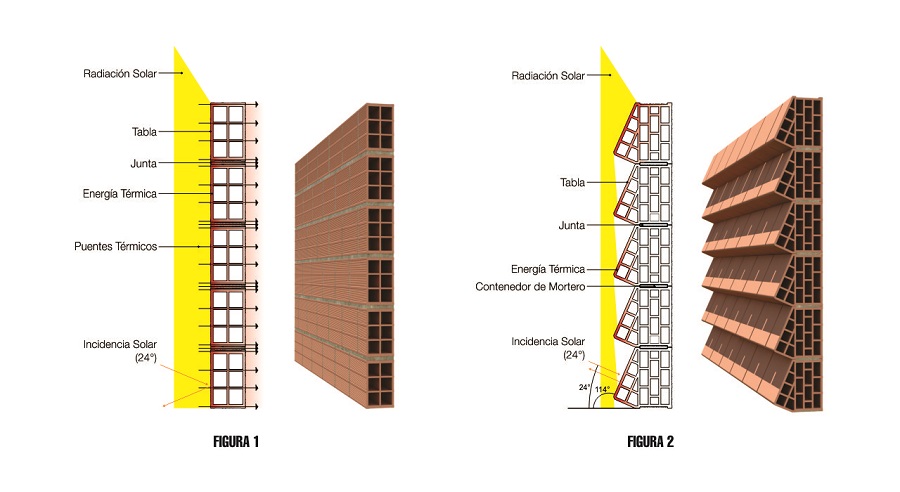 – With traditional fired clay bricks, heat is transferred in one direction, due to the horizontal surfaces that make up the channels in the bricks, acting as thermal bridges that conduct the heat to the inside at a greater speed. (FIGURE 1). The horizontal surfaces of the BT – Bloque Termodisipador are interrupted by a series of smaller sub-channels, making it so the path of the heat is longer, and slowing and reducing its entrance inside. (FIGURE 2 and 3). 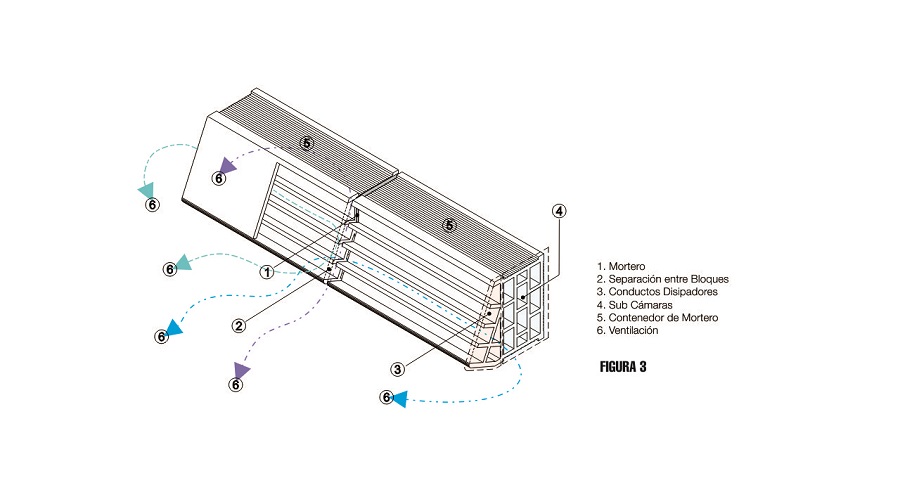 – The process of finishing traditional fired clay brick walls is implemented in various stages: Plaster, stucco, paint, or coating, before getting its final finish on the facade. The BT – Bloque Termodisipador, in addition to taking on the function of a wall, also gives, by means of its irregular surface, a natural finish characterized by the tones that the clay offers, allowing us to leave the facade showing. This in turn translates to saved costs on finishing materials, labor, and time, while also avoiding later maintenance due to deterioration from the climate and aging. (FIGURE 4). 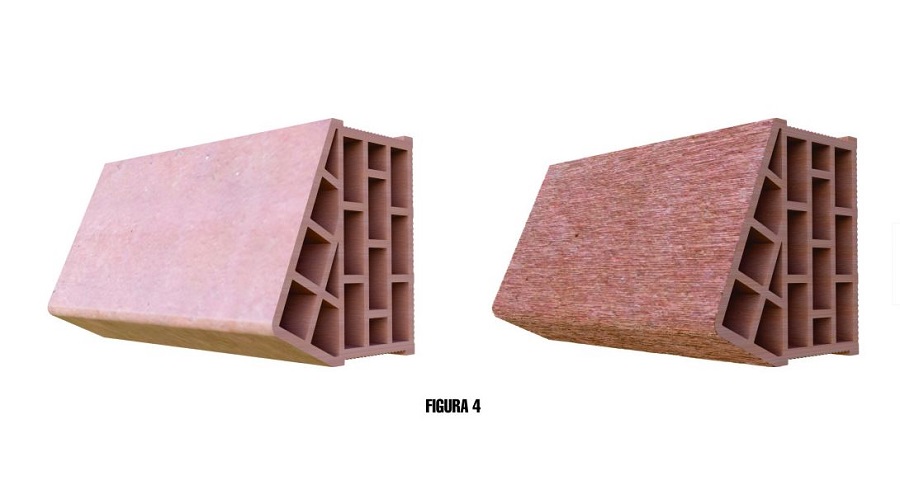 – With walls made of traditional fired clay bricks, the formal composition is always two dimensional and needs a final finish. The irregular form of the BT – Bloque Termodisipador, allows for numerous forms of installation and stacking arrangements that create distinct three dimensional layouts. The BT provides freedom for architectural expression, and creates an authentic regional awareness. (FIGURE 5). 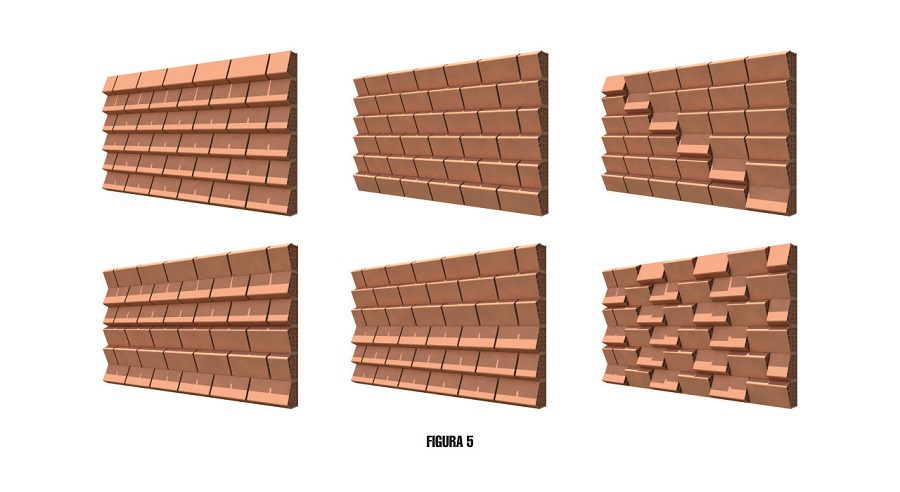 – Many facades made with traditional fired clay bricks have uncompleted walls thanks to the flat edges that expose the mortar and create waste during its installation, damaging its final finish and responding negatively to the environment. On the top of the BT – Bloque Termodisipador there is a space to hold the mortar (FIGURE 3), making it so the mortar level is poured almost the same on every brick. This avoids loss and saves materials during installation. Hiding the mortar and playing with different arrangements and finishes that can be made with the bricks adds an aesthetic to the facade and contributes to the beautification of urban spaces. (FIGURE 6). 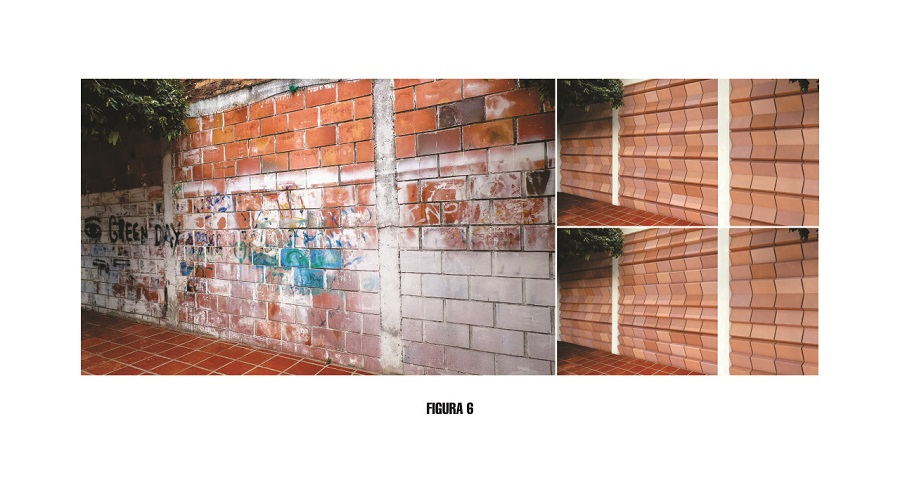 – The surface of traditional fired clay bricks is flat and therefore more easily absorbs noises coming from the outside, allowing it to travel through the whole wall, reflecting it both inside and out. The irregular shape of the  BT – Bloque Termodisipador, acts as a noise reducer, breaking up the continuous sound wave, and dissipating the amount of sound reflected inside and outside the building. FIGURE 7). 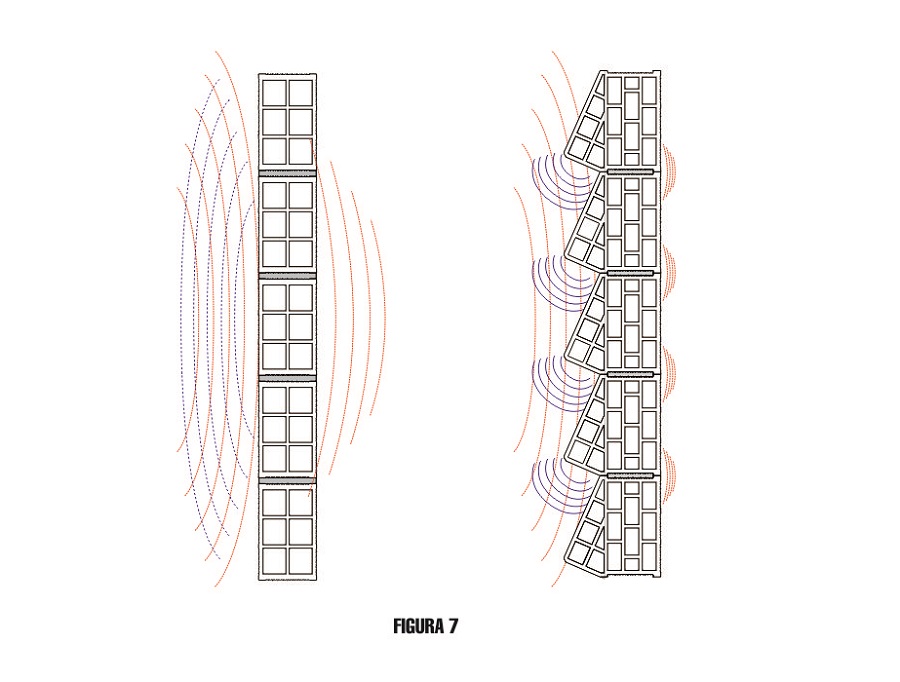 – The smallest side of the irregular triangle has a slant that doesn’t allow for the buildup of water no matter what position the brick is in (FIGURE 5 and 6). If water gets into the channels it will help cool down the brick, thereby cooling off the interior by means of a phenomenon known as “refrigeration by evaporation”.

– The dimensions of the rectangular side of the BT – Bloque Termodisipador, are the same as traditional clay bricks, which allows for traditional bricks to be combined with the BT when constructing walls.

– The installation process for BT – Bloque Termodisipador is exactly the same as traditional bricks, however, they use a joint spacer to correct the position of the brick and limit the mortar to the rectangular side so that the irregular triangle stays completely clean. This joint spacer achieves uniformity in the spaces between bricks, so the irregular triangle remains free of adhesive and works correctly and so that there is always more or less the same amount of mortar. (FIGURE 8). 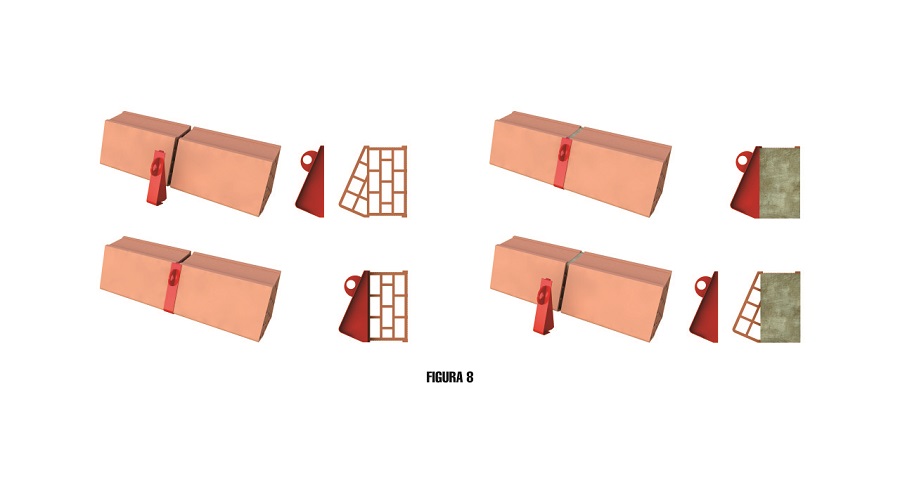 This project is related to the sector of ceramics called Ceramic brick production and fired clay blocks, made with the extrusion technique, classified according to the following regulations of Colombia: NORMA NTC – 4205 with the grouping of non-structural mason work PH – E, used in accordance with NORMA NSR – 10, in non-reinforced masonry enclosures (D9) and masonry of confined walls (D10).