The Pen Is Mightier Than The Sword: 28 Cartoonists Pay Tribute To The Victims Of The Charlie Hebdo Shooting

by Architect K.A.
Reading Time: 5 mins read
0 0
A A
0
SHARES
129
VIEWS
Share on FacebookShare on TwitterPin to Pinterest

In the wake of the horrific shooting at the offices of the French satirical newspaper Charlie Hebdo, illustrators and cartoonists around the world come together in solidarity with the 12 artists and ordinary people who died in that event by doing what they do best – drawing cartoons that express their thoughts and emotions more eloquently than words ever could.

Their messages range from anger and defiance to grief and hope, but there is a common thread. It is clear that, in their eyes, the people at Charlie Hebdo have died as martyrs who championed the freedom of expression and of the press, which are some of the core elements of a free society. 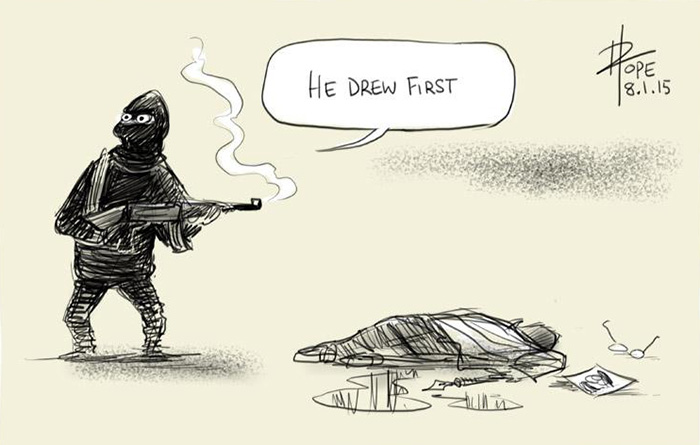 6. We have avenged you 16. They died for the freedom of expression 17. As if we needed more humorless editors 23. Without humor we are all dead 26. The world has become so serious that humor is a risky profession 26 Resolutions To Keep You Organized In 2015

26 Resolutions To Keep You Organized In 2015