The Coolest Cubicles in the World

by Architect K.A.
Reading Time: 9 mins read
0 0
A A
1
SHARES
143
VIEWS
Share on FacebookShare on TwitterPin to Pinterest

Small is beautiful–and efficient. These freestanding pods, domes, and workstations are so artfully designed and ecologically sound that one might wonder: Is this the future of work?

Turns out, the future of the cubicle isn’t very square at all. Some of the coolest small-office spaces in the world–for the workplace or the home–have indoor plexiglass spheres that dampen phone-call noise or outdoor polygons with triangular windows.

Here’s a look at all nine of Inc.’s favorites. 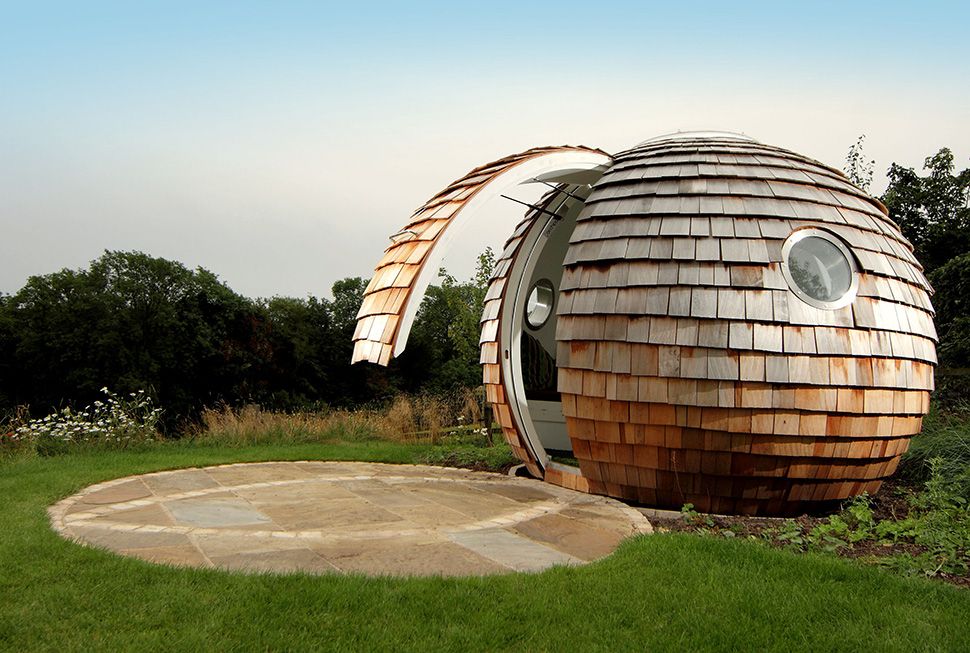 So you’d like a home office but don’t have the space? Try the backyard. The Archipod is a unique, eco-friendly prefab garden office made of shingle siding and timber floors. It’s created by a company founded in 2009 by Chris Sneesby, who calls himself “The Podfather.” An individual pod costs about $20,000 and can be delivered directly to your home.
Archipod
Location: Anywhere
Designed by: Archipod Ltd.
Use: Various personal offices and recreation spaces, globally PHOTO: ARCHIPOD 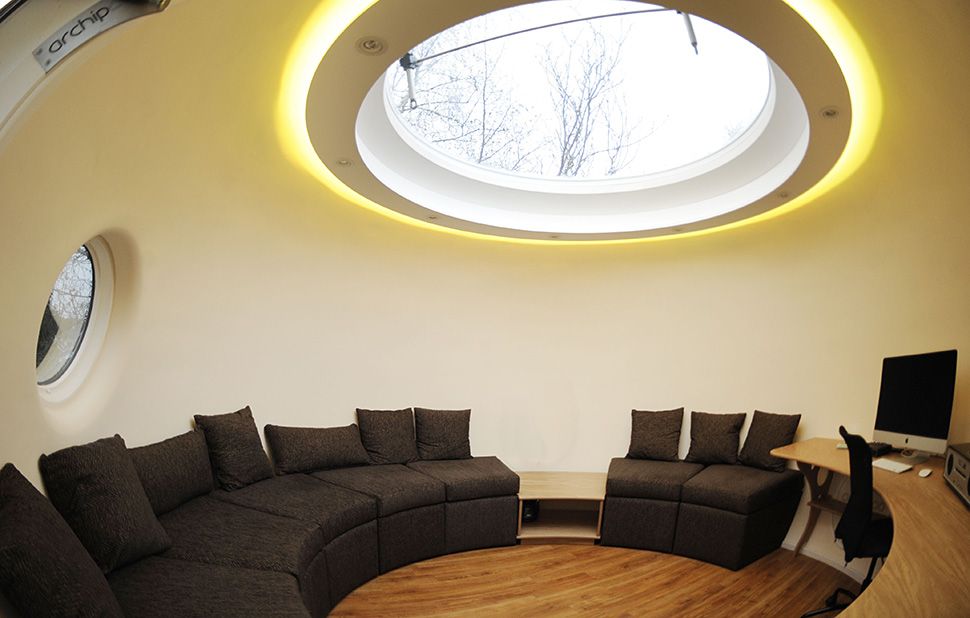 Built in a workshop in North Yorkshire, a town about four hours north of London, Archipods are fitted with air-conditioning units, lighting, multiple electrical outlets, one small porthole, and timber floors. Heating comes from an electric panel radiator, and the pods are insulated with fiberglass made from recycled glass. The pods are customizable, but come in two standard unit sizes: the smaller pod is about 9.5 feet in diameter, while the larger pod is 12.5 feet.
–Eric Markowitz
Archipod
(Continued) 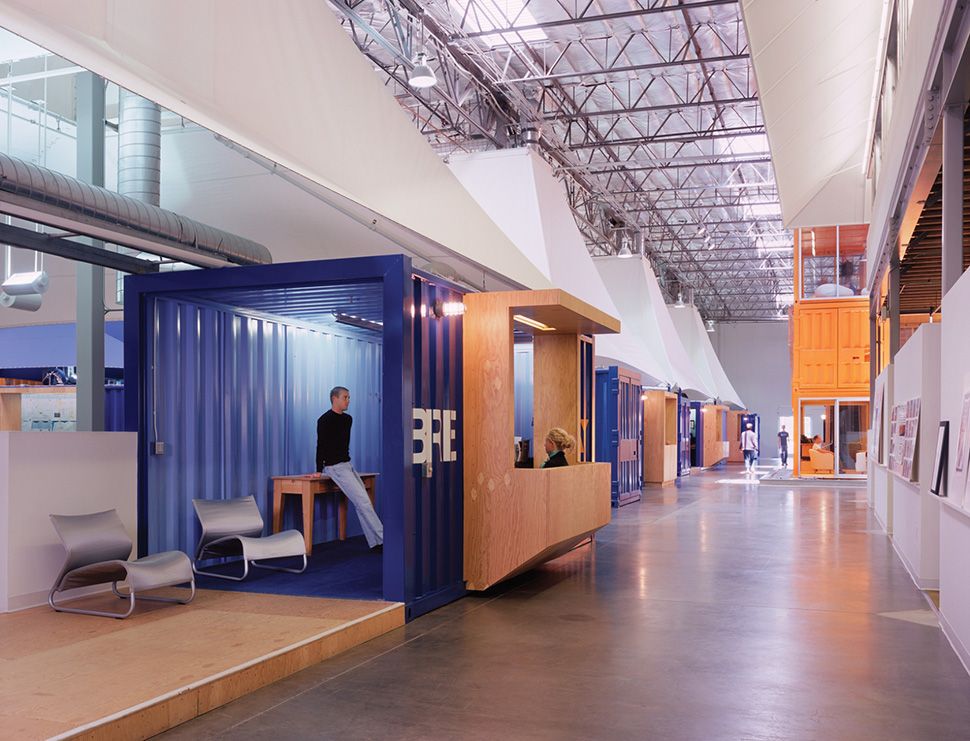 This is no industrial office: it’s actually the home of a company that does event planning for charities. It was growing fast, and purchased an old warehouse space in Los Angeles to transform into a new office. Under a strict budget of $40 per square foot, Clive Wilkinson Architects took the job–and approached it without convention. It created indoor pathways leading to distinct “work neighborhoods” constructed of prefabricated shipping containers.
Pallotta Teamworks
Location: Los Angeles
Designed by: Clive Wilkinson Architects
Use: Office of Pallotta Teamworks 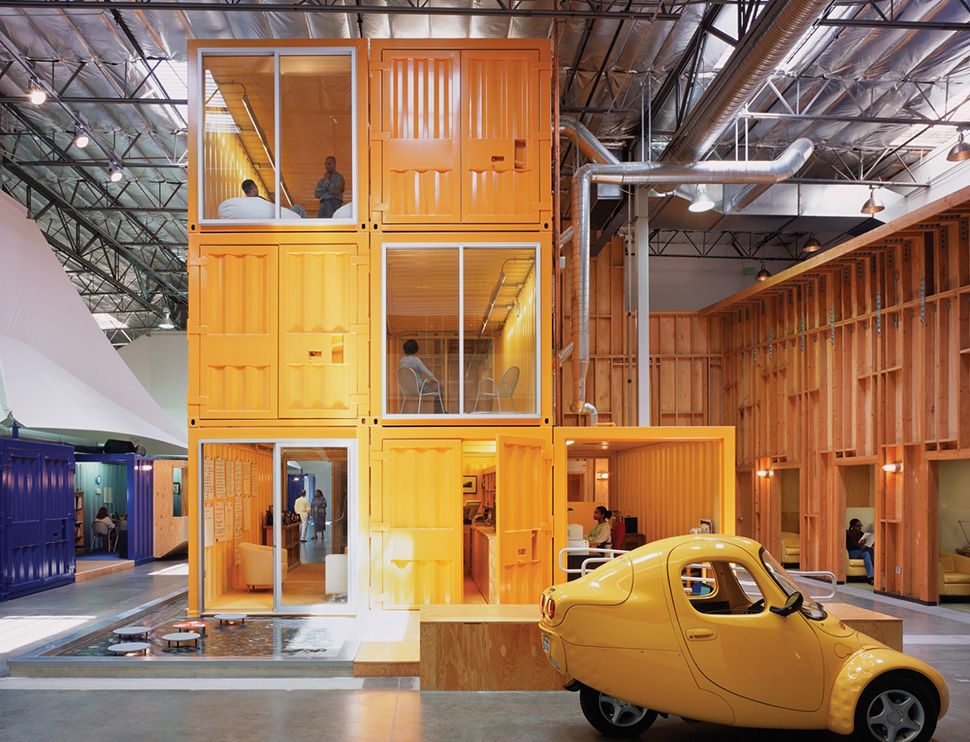 The use of shipping containers–each with an average cost of $3,400–was found to be the most economical way to create dozens of individual, small private offices and support facilities. They are stacked vertically, and hooded with air-flow canopies, creating giant “tented islands,” which minimize the volume of air conditioning needed to cool this massive, 47,000-square-foot Southern California space.
–Christine Lagorio-Chafkin
Pallotta Teamworks
(Continued) 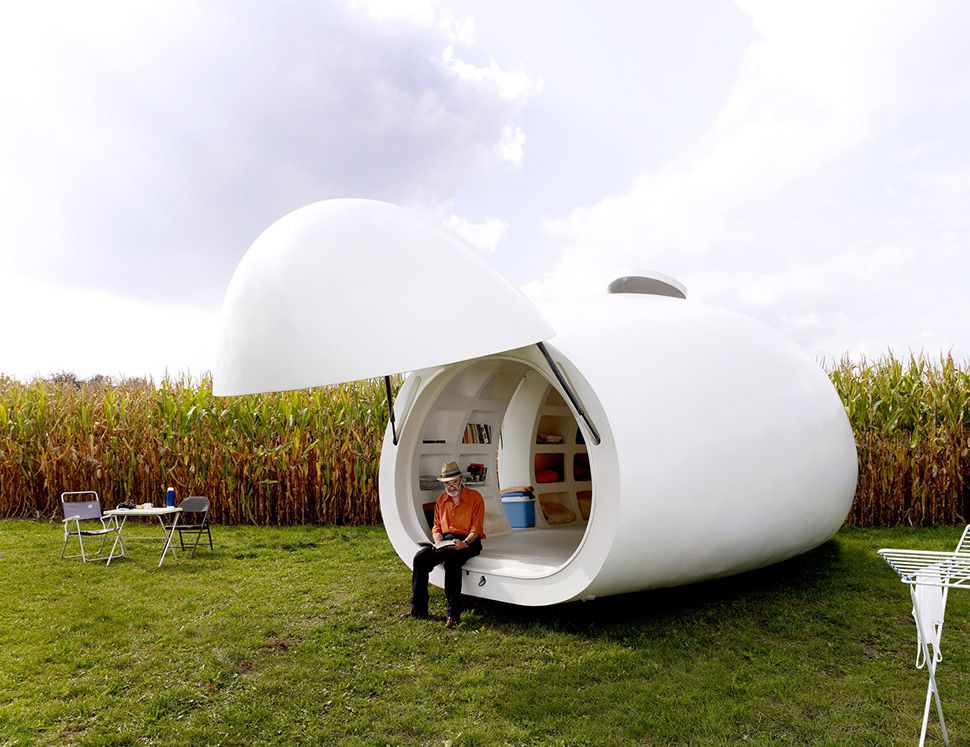 DmvA, a Belgian architecture firm, designed the blob vB3, a white, egg-shaped pod, with no one particular function in mind. It could be used as a garden house, a guest house, a studio–or a spacious, private office. The 60-square-foot white egg constructed of wood and polyester, comes equipped with a bathroom, kitchen, and plentiful storage space.
Blob vB3
Location: Mobile
Designed by: DmvA
Use: Office of XfactorAgencies 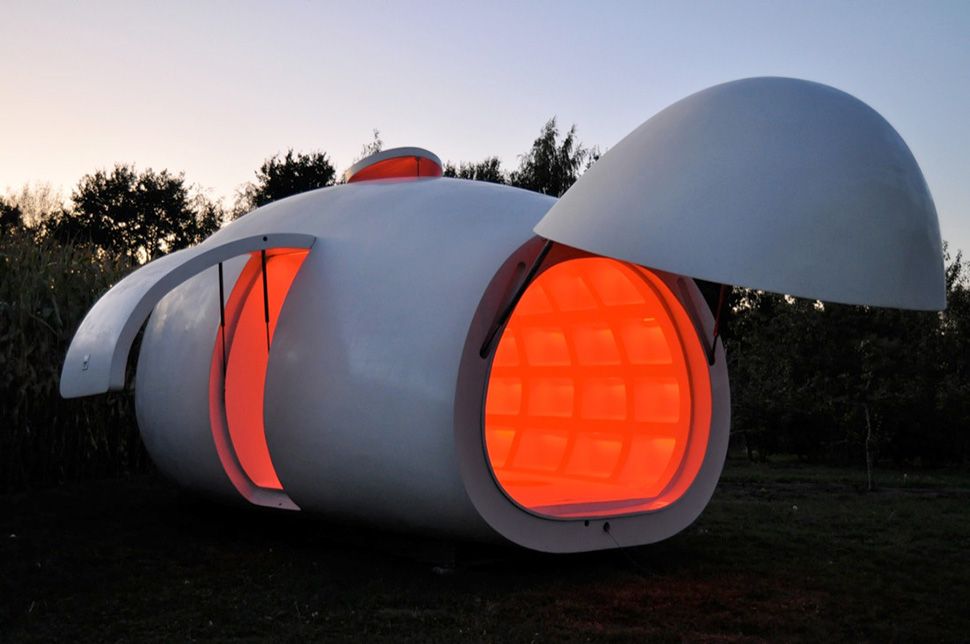 Blob vB3 is a perfect example of form meeting function: It’s an aesthetically inspirational room that serves the purposes of a modern worker. Water and electricity are supplied via an outside connection (much like a mobile home) and on warm days, the entire “nose” of the blob can open to the outdoors.
–Eric Markowitz
Blob vB3
(Continued) 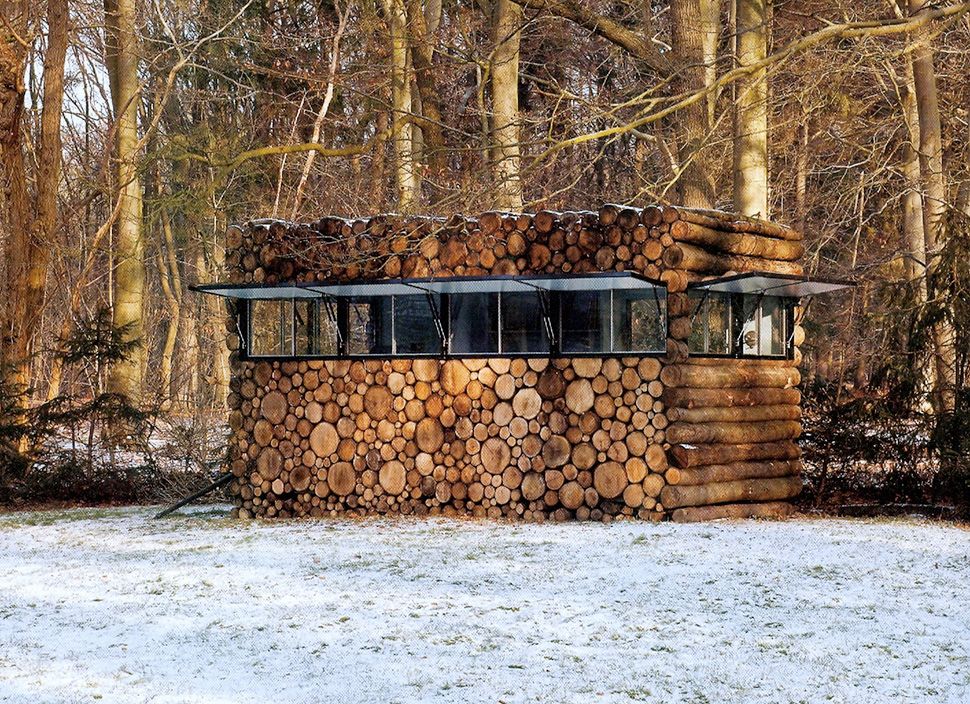 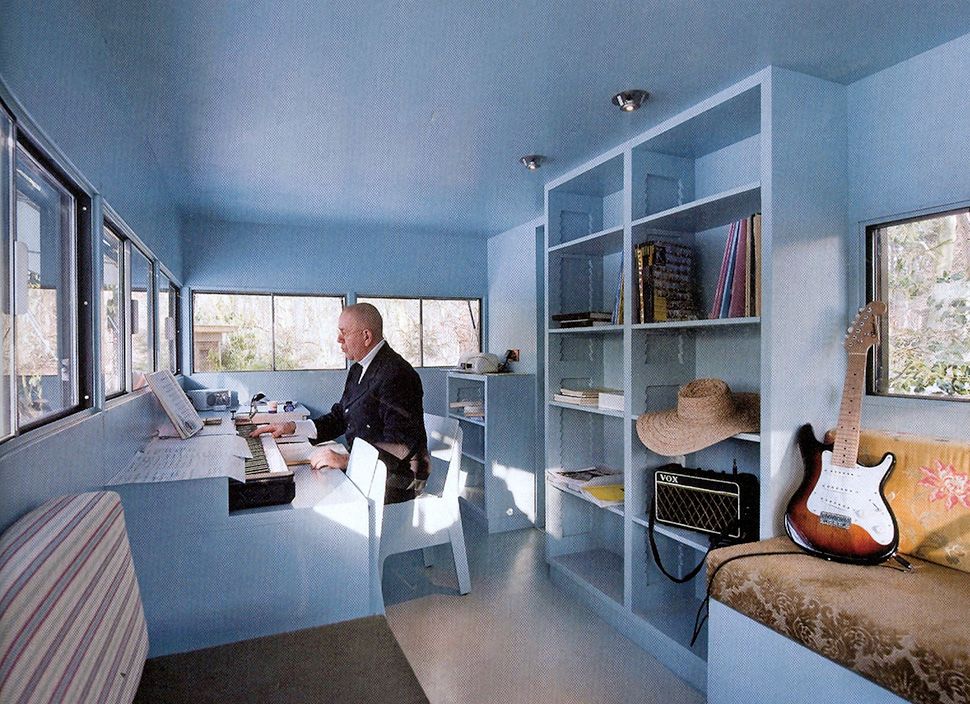 It’s not just a recording studio: this rustic cabin is actually a miniature mobile home, with a plastic and steel frame, on wheels. Inside, it’s a sleek blue room, outfitted with a modernist desk and homey mismatched cushions. There’s not a slice of wood in sight.
–Christine Lagorio-Chafkin
Log Cabin Recording Studio
(Continued) 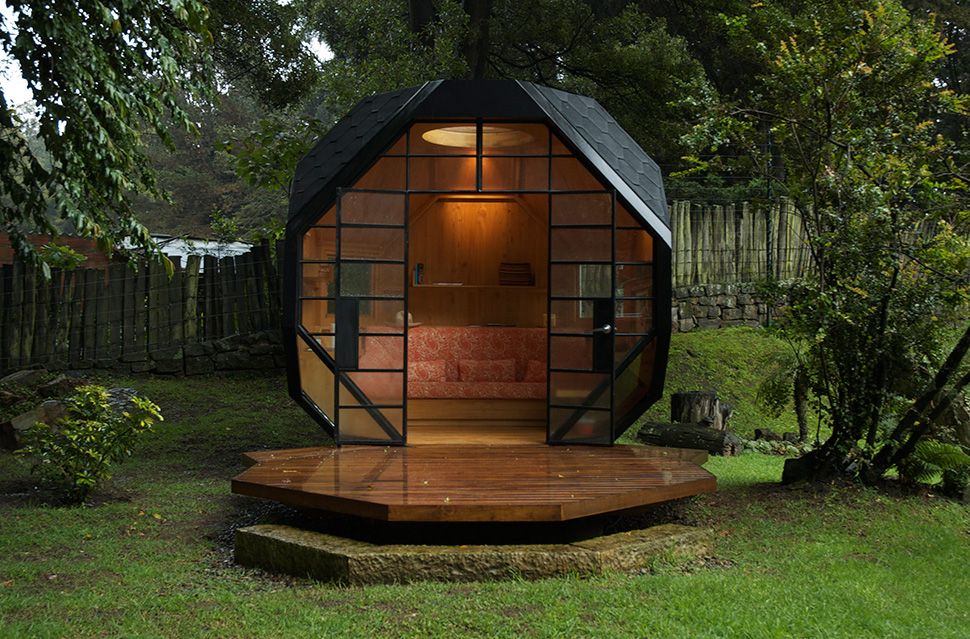 This shelter-like relaxation space was designed with the intent of disrupting its users daily routines and creating an appreciation for outdoor activities. It was also intended as an escape from the mundane. Mathematical minds might appreciate this truncated-cubic-octahedron shape, and the circular skylight seems built not just for letting in the sun, but also for freeing thoughts.
Polyhedron
Location: Bogota, Colombia
Designed by: Manuel Villa with the help of architect Alberto González
Use: Personal backyard retreat 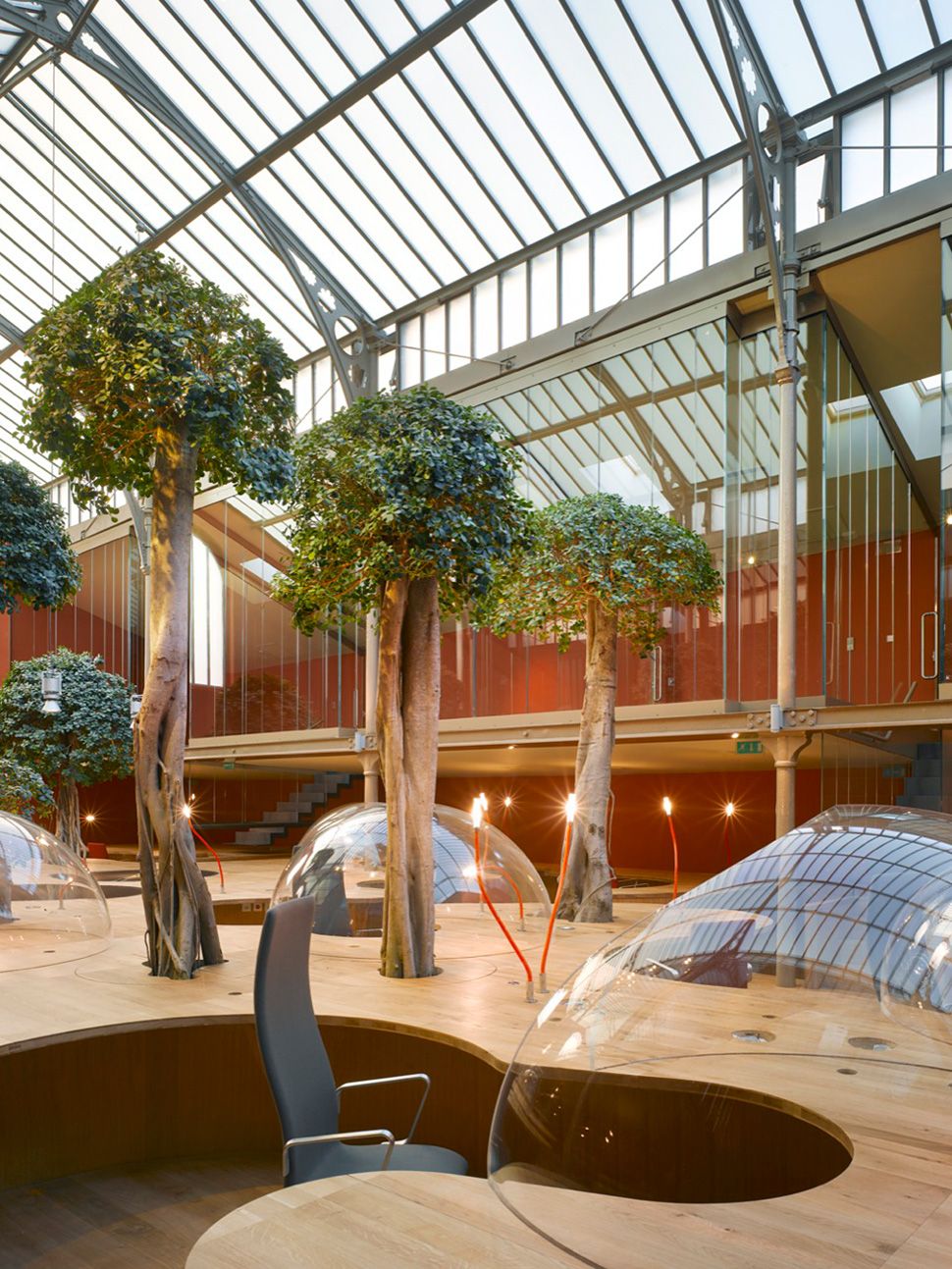 Orbs in an Atrium

Designed by French architect Christian Pottgiesser, this other-worldly office became the headquarters for two French companies: Pons and Huot. It is adorned with floating staircases, a recreational room, and indoor ficus panda trees galore. (That works because the bulk of the space is contained within a stately glass atrium, comprised of a restored industrial hall built in the late 19th century.)
Pons and Huot
Location: Paris, France
Designed by: Christian Pottgiesser
Use: Executive offices of two companies, Pons and Huot 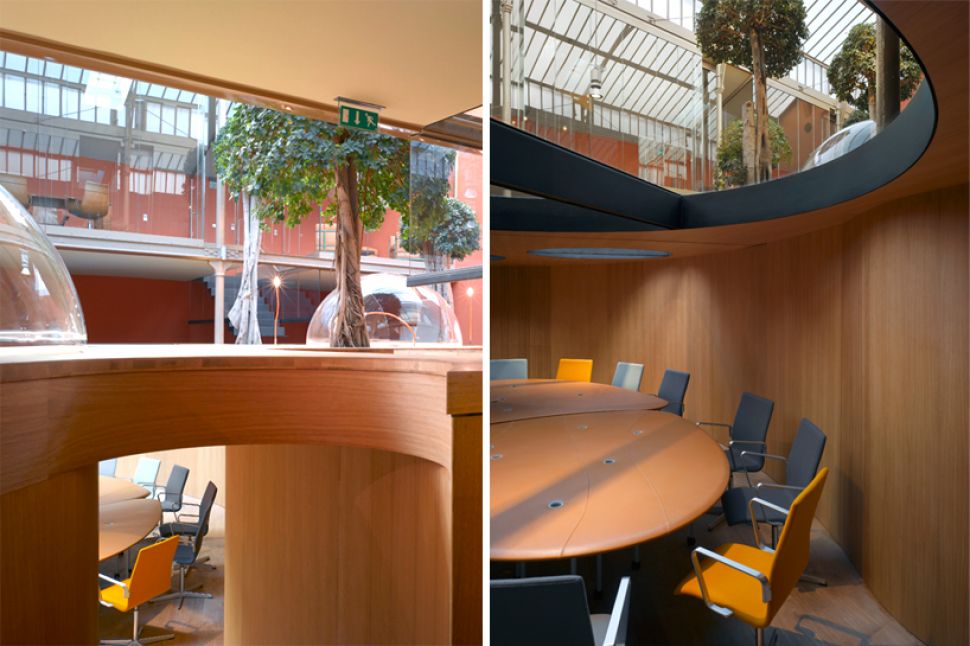 The 5,800 square feet space was designed with lower level meeting rooms, lounges, and a kitchen, tucked under the main floor of offices. Well, they’re not exactly “offices,” so much as Plexiglas domes arranged in a snaking route on one common expansive wooden surface. The desk-bubbles are called “telephone domes,” and help dampen the acoustics in the open atrium space.
–Carolyn Cutrone
Pons and Huot
(Continued) 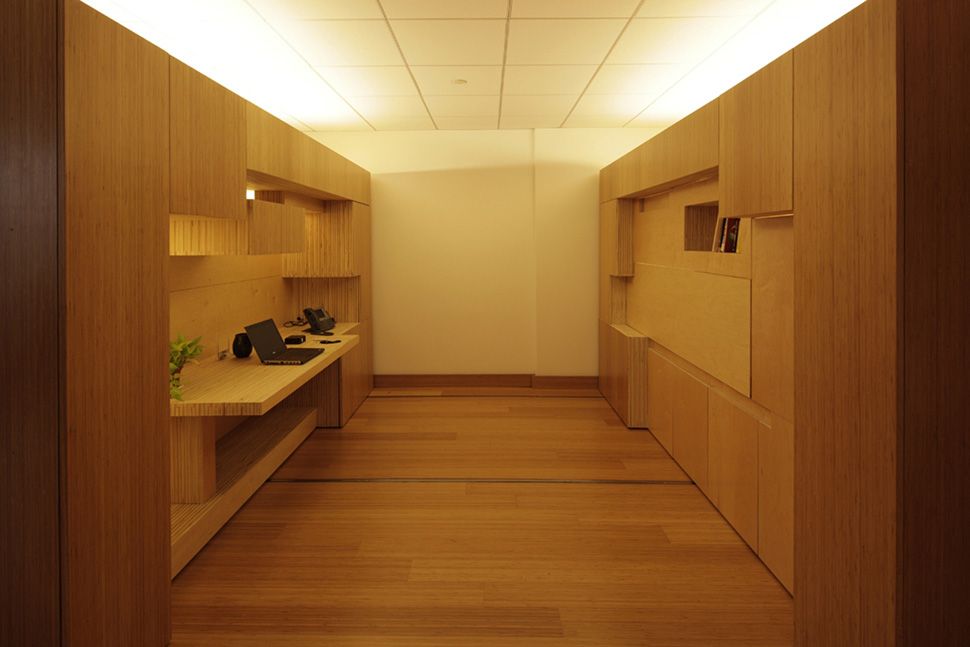 Manhattan dwellers are all-too-familiar with tiny spaces, so it’s probably not all too surprising that the designers behind this collapsible workstation are based in New York. A team at Taylor and Miller Architecture and Urban Design designed these flexible workstations for a 1,000-square-foot New York City office. They function almost like an old-fashioned filing cabinet system. Crank them apart, and you have a multi-row office. Crank them together, and you’re left with open space.
Collapsible Workstations
Location: New York City
Designed by: Taylor and Miller Architecture and Design
Use: Office cubicles at Manhattan-based nonprofit Environmental Grantmakers Association 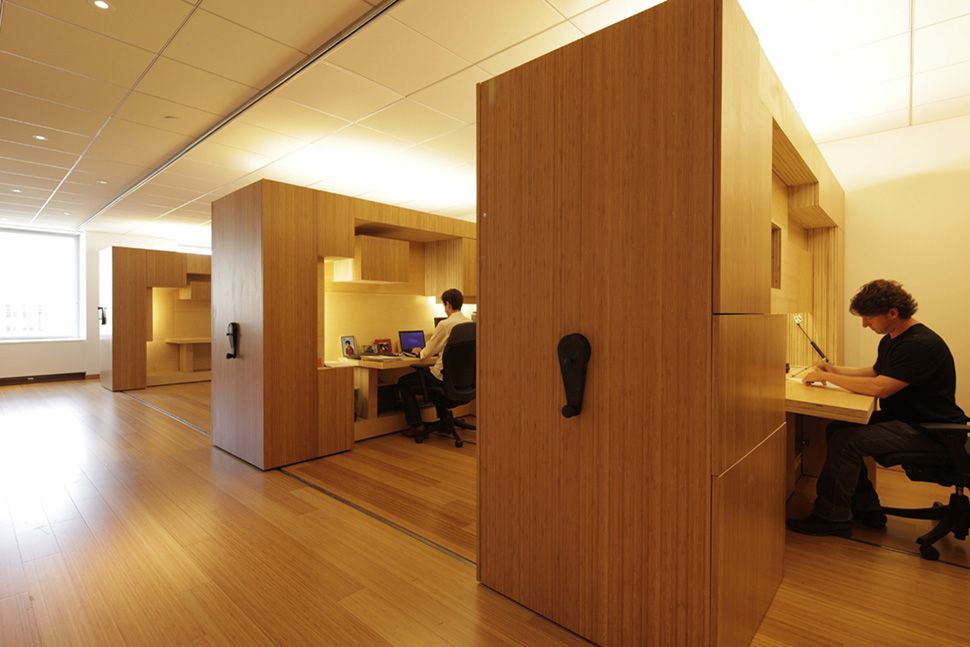 The system actually has seven workstations, and each is fitted with storage cubbies laid out in a puzzle-like design. According to the architects, cranking the workstations open or closed is easy. “You can literally move the crank with a single finger,” Alex Miller, who worked on the project, tells the Architecture website Architizer.
–Eric Markowitz
Collapsible Workstations
(Continued) 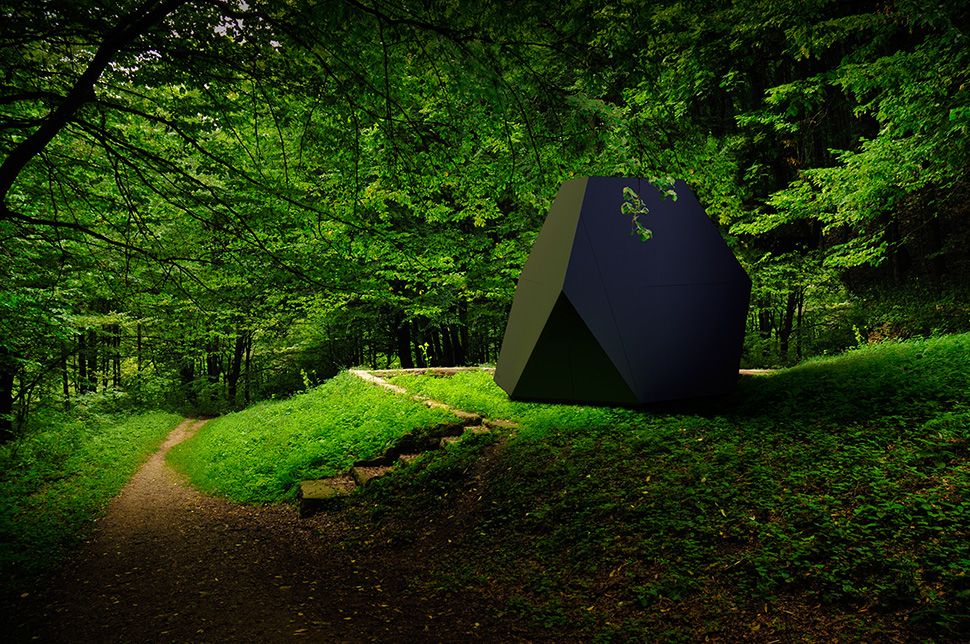 There’s a common notion that a “home office” is simply a room in one’s home, re-done with desk, bright lamp, and monitor for an instant office. The Tetra Shed by Innovation Imperative challenges that notion by plopping a freestanding office down anywhere–even out of doors. It was designed by David Ajasa-Adekunle to become an extension of the living space, but be flexible enough to find a role in a public space, in classrooms, or retail shops.
Tetra Shed
Location: Backyards and pop-up offices around the world
Designed by: Innovation Imperative
Use: Personal offices 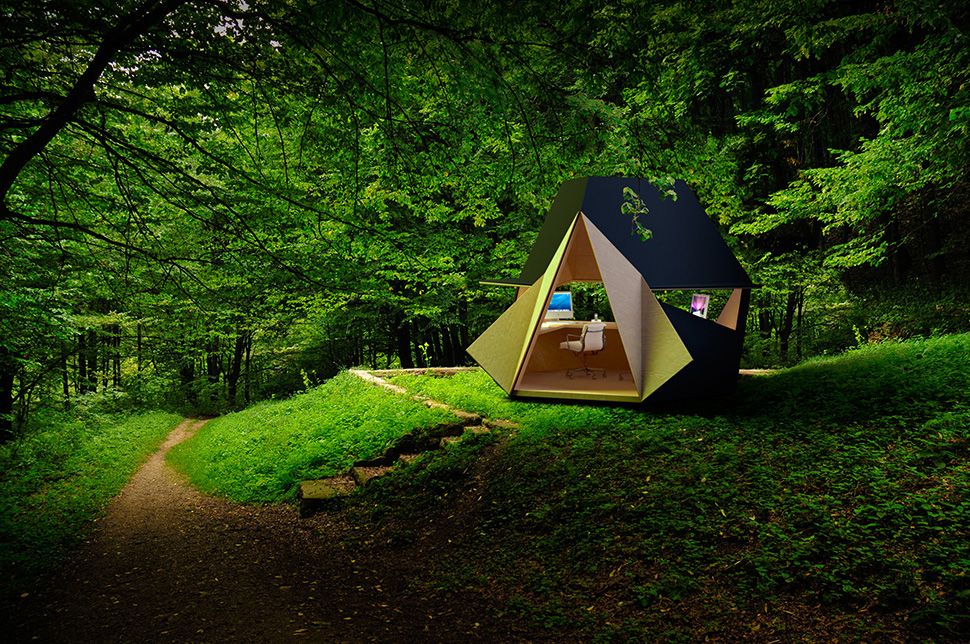 With a footprint of 10 square meters, it’s large enough to comfortably fit two people working at desks. It’s also a modular system, which means many Tetra Sheds can be built together. Simple materials (usually birch-faced plywood on one side; matte black rubber on the other) and modern methods of construction keep the price somewhat reasonable.
–Carolyn Cutrone
Tetra shed
(Continued) 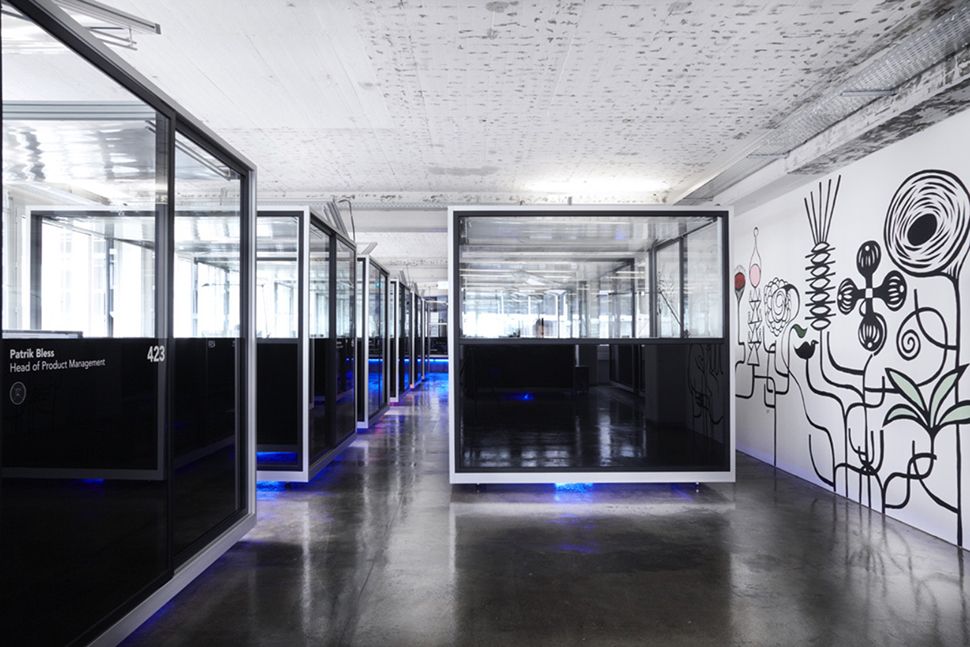 As its name implies, WorkPods Zurich offers a series of identical pods for individual workers or freelancers. But the space is not as static as it would seem to be. Designers Meury Architektur built OpenSystems so that the floor-to-ceiling glass doors can slide down, and each personal cubicle can be removed to create an open-plan space.
WorkPods Zurich
Location: Zurich, Switzerland
Designed by: Meury Architektur
Use: Office of OpenSystems AG 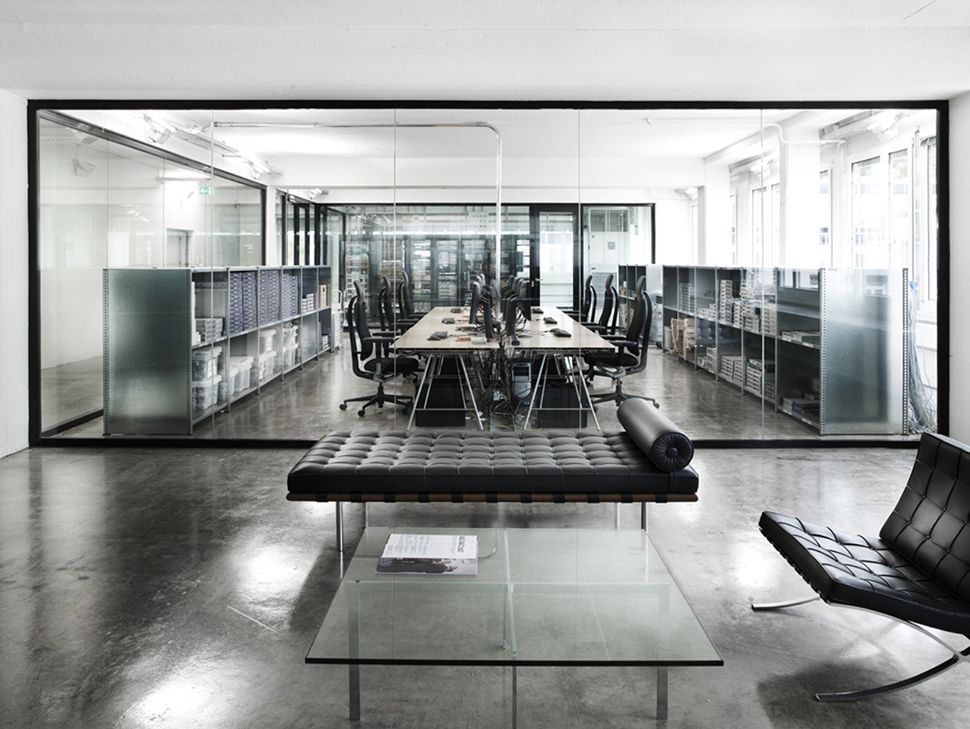 Meury Architektur designed the individual office units with a precision in order to imply that the comfort of each individual in a workplace should take priority over the existing design of any given office space. The sleek pods can be dropped into any existing raw space to create contrast–which just might fuel creativity.
–Christine Lagorio-Chafkin
WorkPods Zurich
(Continued)
Share1TweetPin
Previous Post

The World’s 24 Coolest Bars To Grab A Drink

The World’s 24 Coolest Bars To Grab A Drink