by Architect K.A.
Reading Time: 9 mins read
0 0
A A
322
SHARES
1.1k
VIEWS
Share on FacebookShare on TwitterPin to Pinterest

Some people would rather do literally anything else than go to an amusement park, preferring to plant their feet firmly on the ground. Others seek out the fastest and most fear-inducing coasters out there, traveling far and wide for a chance to catch some speed.

The last one on this list looks like it shouldn’t even exist in the first place. But no matter where you fall on the spectrum, there’s no denying that these roller coasters are just plain terrifying. Their steep drops, winding turns, and tendency to go upside-down at a moment’s notice are all reasons to get nervous before stepping aboard. 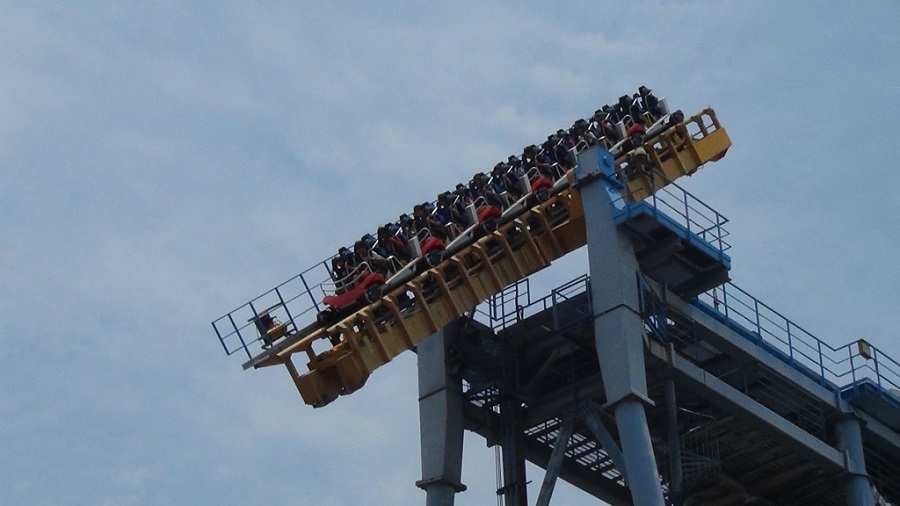 Located at Lihpao Land Discovery World in Taiwan is terrifying just to look at: The ride goes up 114 feet before the track “break,” flipping the car down 90 degrees and dropping it 34 stories. It’s the only roller coaster of its kind in the world. 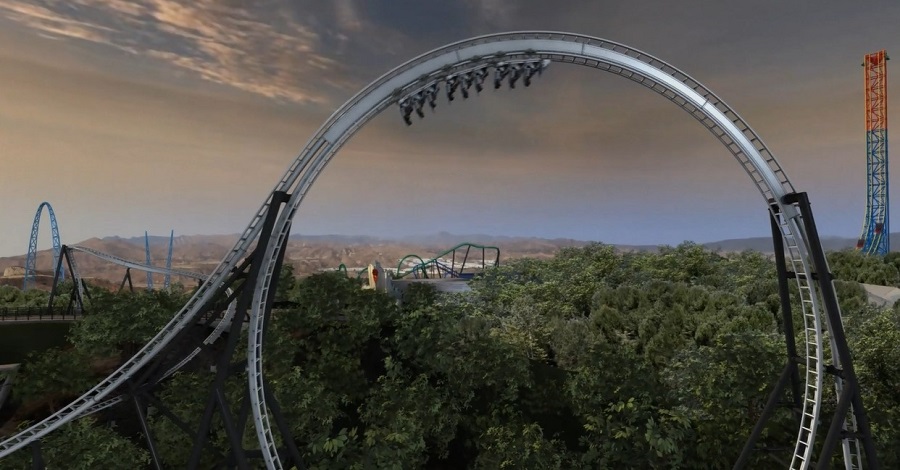 Located at Six Flags Magic Mountain in Valencia, California has the world’s tallest vertical loop, which stands at 160 feet. It also launches the car from the station at 66 miles per hour. 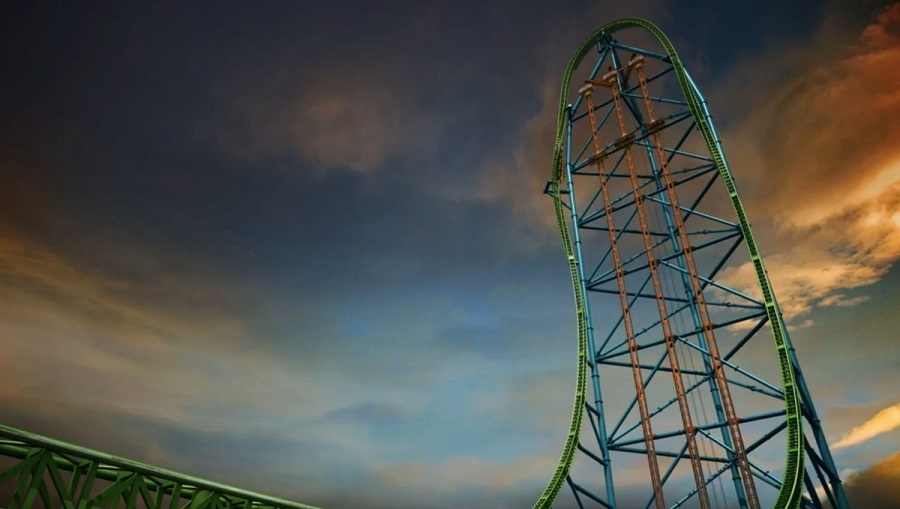 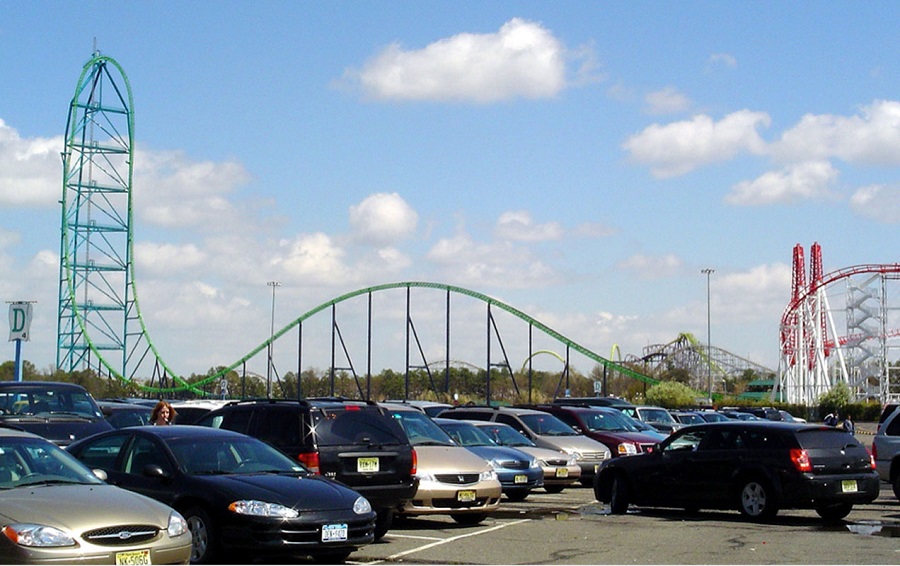 Located in the Six Flags Great Adventure Park, Jackson, NJ, in the USA, Kingda Ka is the tallest coaster in the world. Measuring 456 feet, it provides the longest vertical drop to its riders, at 418 feet from the ground. This coaster has held this world record since 2005.

To traverse this fantastic drop of 418 feet, riders are plunged down from the top and reach a speed of 206km/h in less than 3.5 seconds, experiencing free fall. This, incidentally, is also the second fastest speed attained on any coaster in the world. It gives a whole new meaning to the phrase “my heart rose into my throat”! 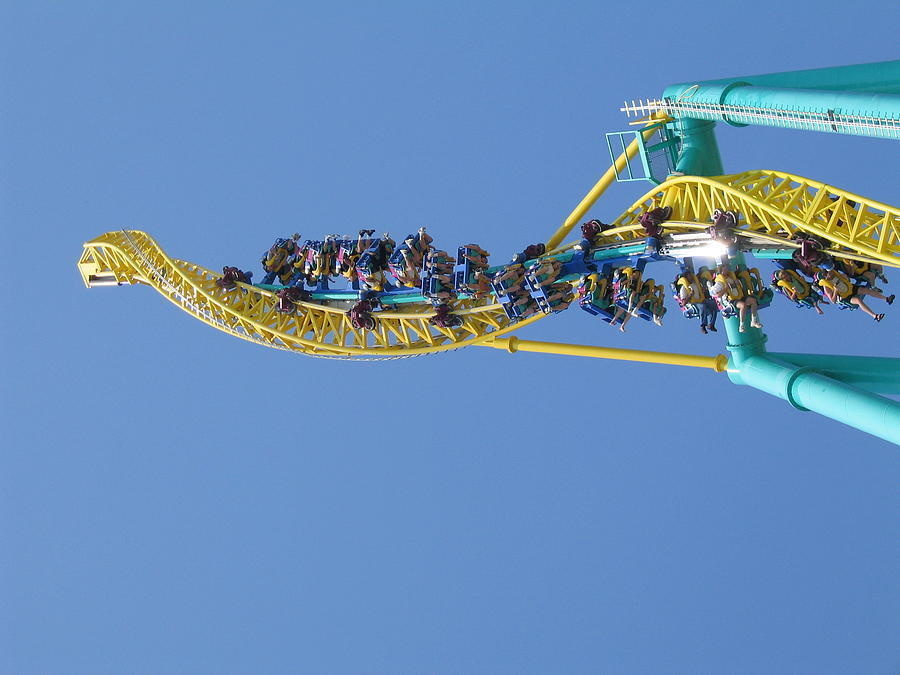 Located at Cedar Point in Sandusky, Ohio, it is the world’s largest suspended impulse coaster, and just looking at it is enough to get your heart racing. 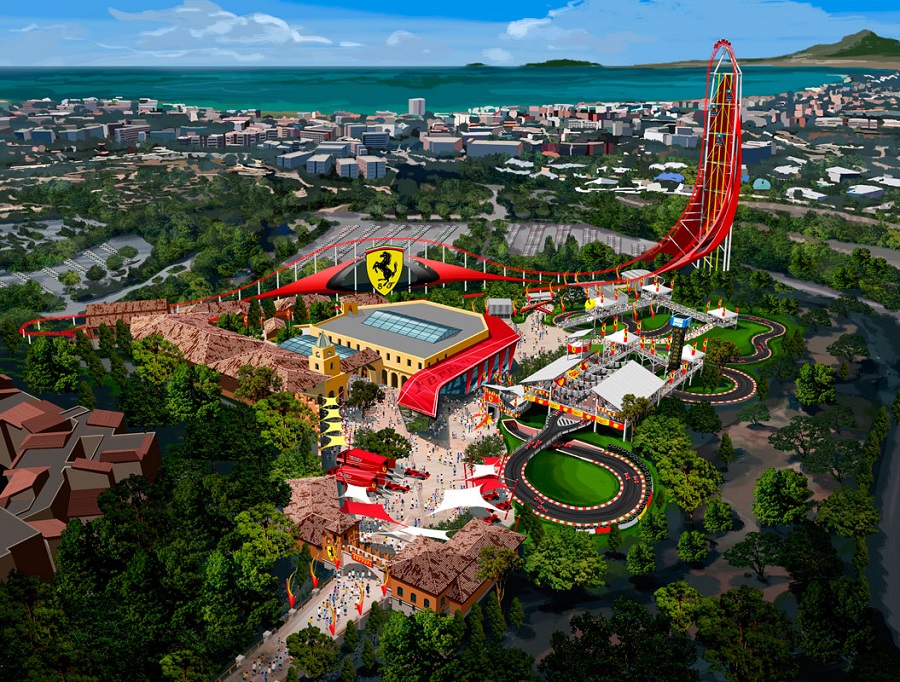 The Formula Rossa is situated in the Ferrari World Theme Park in the UAE. Maintained by multiple-time Formula 1 championship winners Ferrari, it is no wonder this coaster is the fastest in the world. 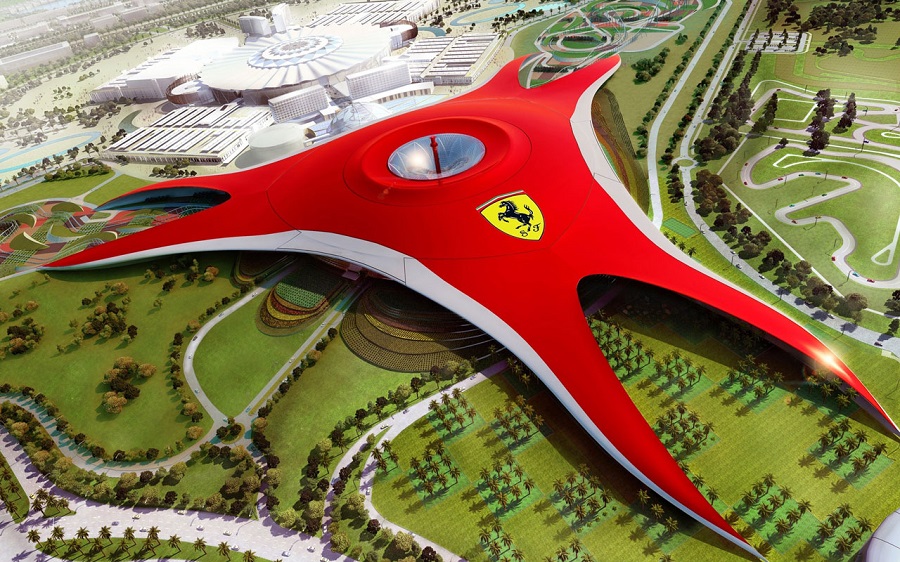 Riders reach a speed of 240km/h in less than 5 seconds – the actual speed that an F1 car reaches in races. The track has a total length of 2,000 meters, though you will be unable to tell due to the super-fast ride. Riders must wear special safety goggles to protect their eyes against insects and other flying debris, thus making it an even more authentic F1 experience. This ride has been the fastest in the world since November 2000. 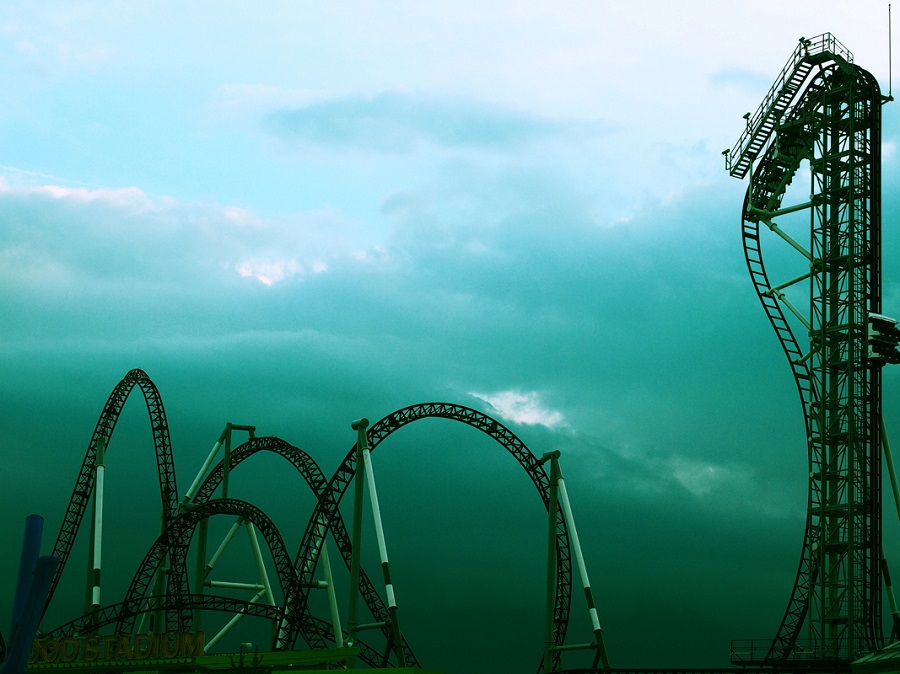 The Takabisha is located in the Fuji-Q Highland, Fujiyoshida, Japan. It is an engineering marvel and is a coaster with a maximum vertical angle of 121 degrees for its riders. This ride has been holding this record since July 2011 and has a total of 7 vertical inversions. It is a genuinely gravity-defying experience that will get your adrenaline going. 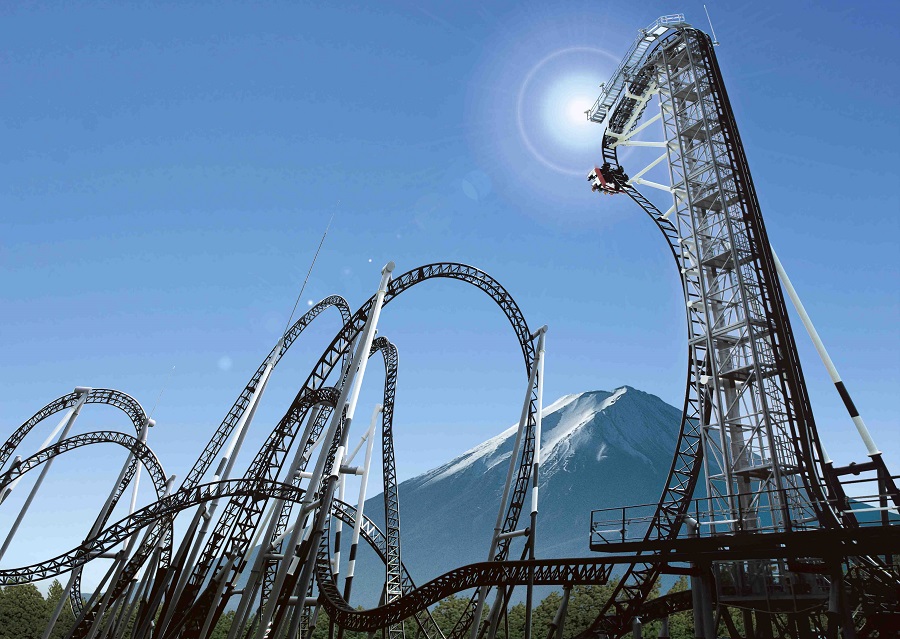 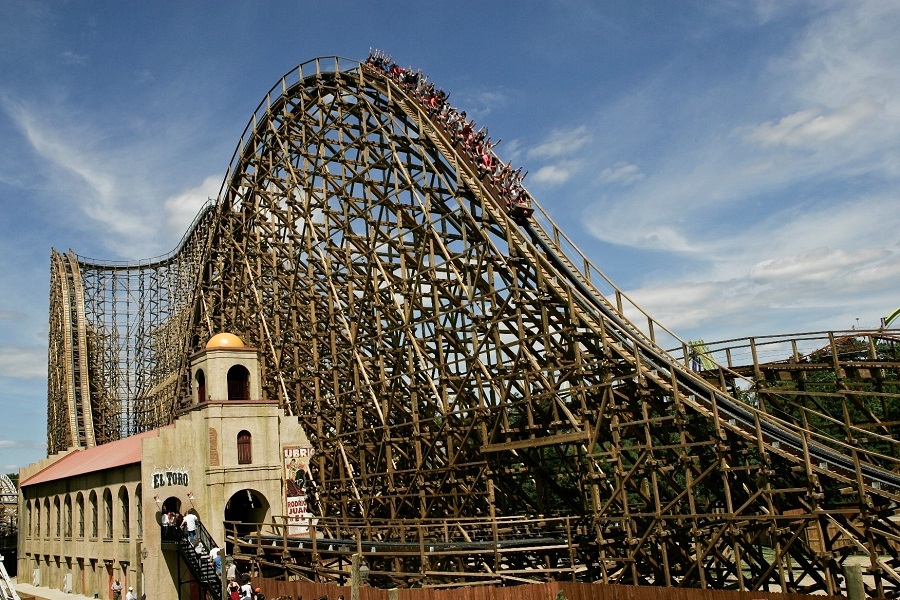 Located at Six Flags in New Jersey is the fastest wooden roller coaster in the world. It reaches up to 70 mph speeds, which is pretty impressive for an old-fashioned roller coaster such as this. 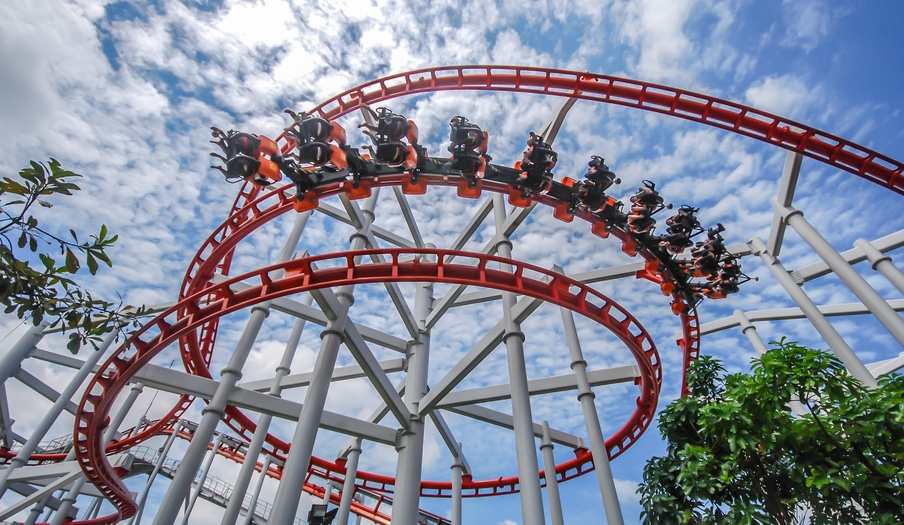 Located at Holiday Park in Haßloch, Germany, it isn’t the tallest or longest coaster, but it’s got tons of unexpected 360-degree twists, loops, and turns. 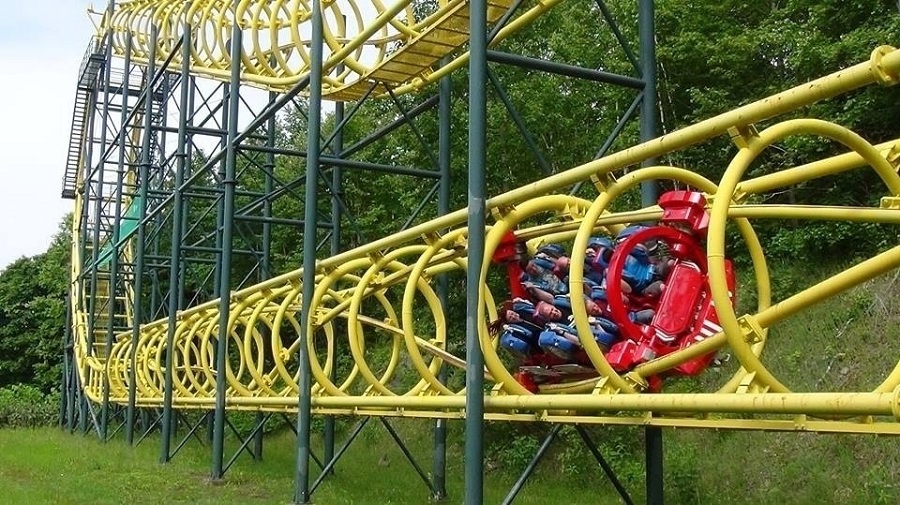 Located at Nagashima Spa Land in Mie Prefecture, Japan puts riders in fiberglass shells and then brings them up a vertical chain lift hill before plummeting them to an 84-degree drop. 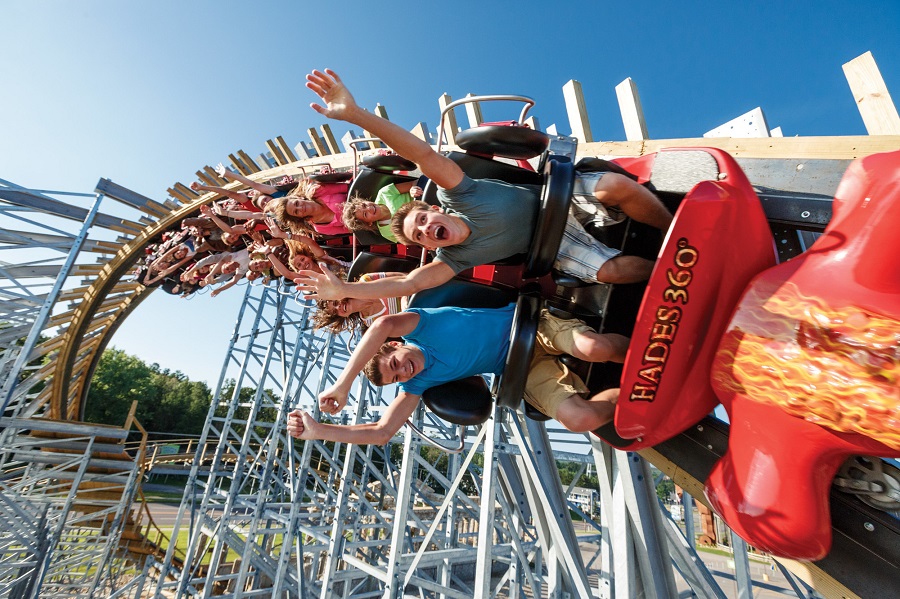 Located at Mt. Olympus Water & Theme Park in Wisconsin, Dells, Wisconsin, was the first wooden coaster to go upside down. 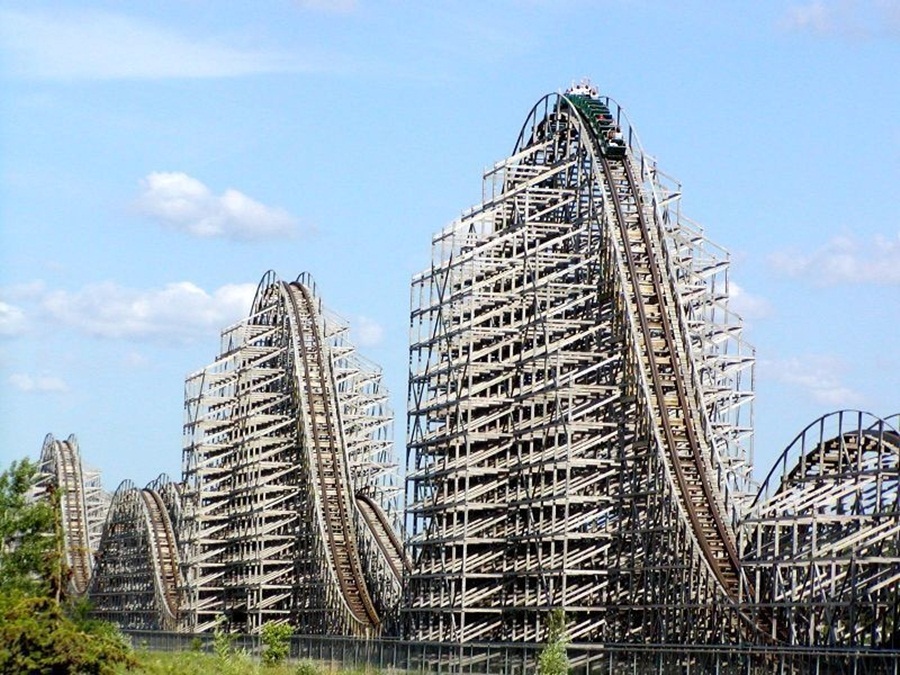 Michigan’s Adventure in Muskegon County, Michigan, is the 6th longest wooden coaster in the world and boasts plenty of exciting drops. 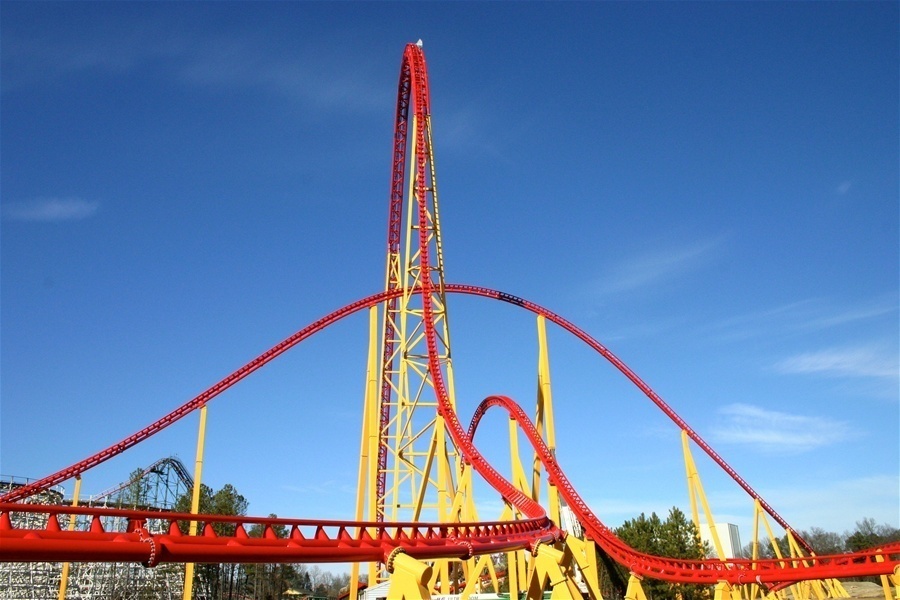 Located at Kings Dominion in Doswell, Virginia, it drops over 300 feet, making it one of only four coasters worldwide. 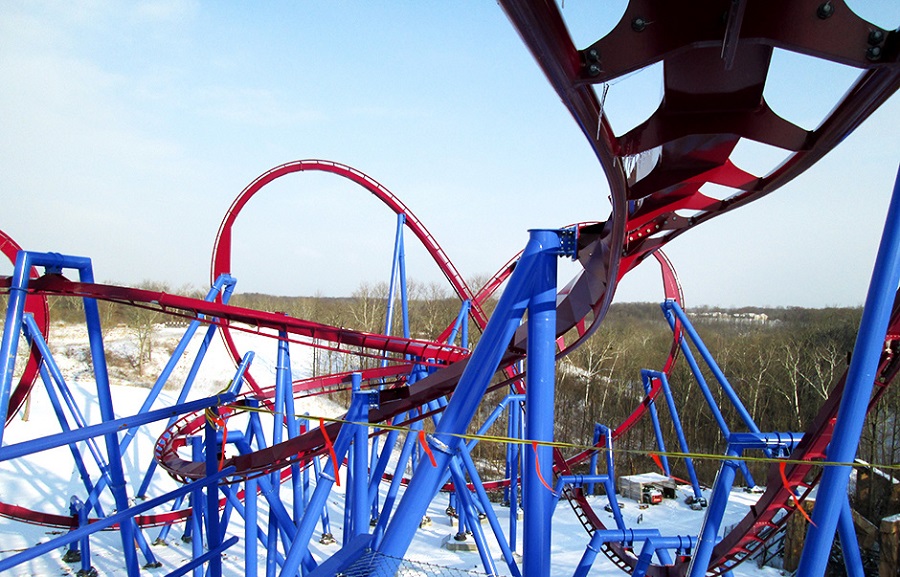 Located at Kings Island Amusement Park in Mason, Ohio, it is the longest inverted coaster in the world.

14. The Superman Escape from Krypton at Six Flags comprises 1,500 feet of track. 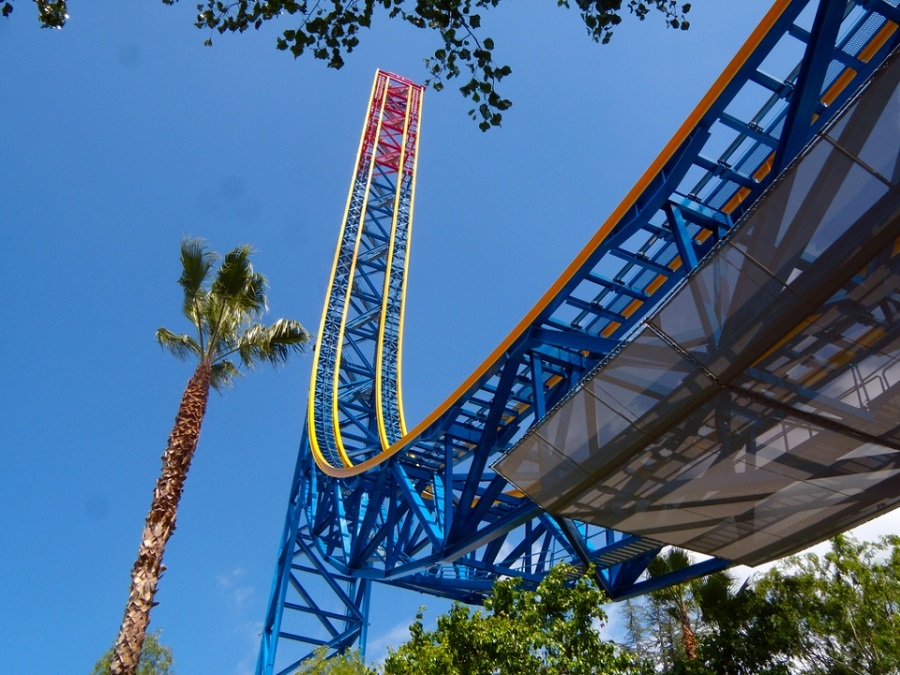 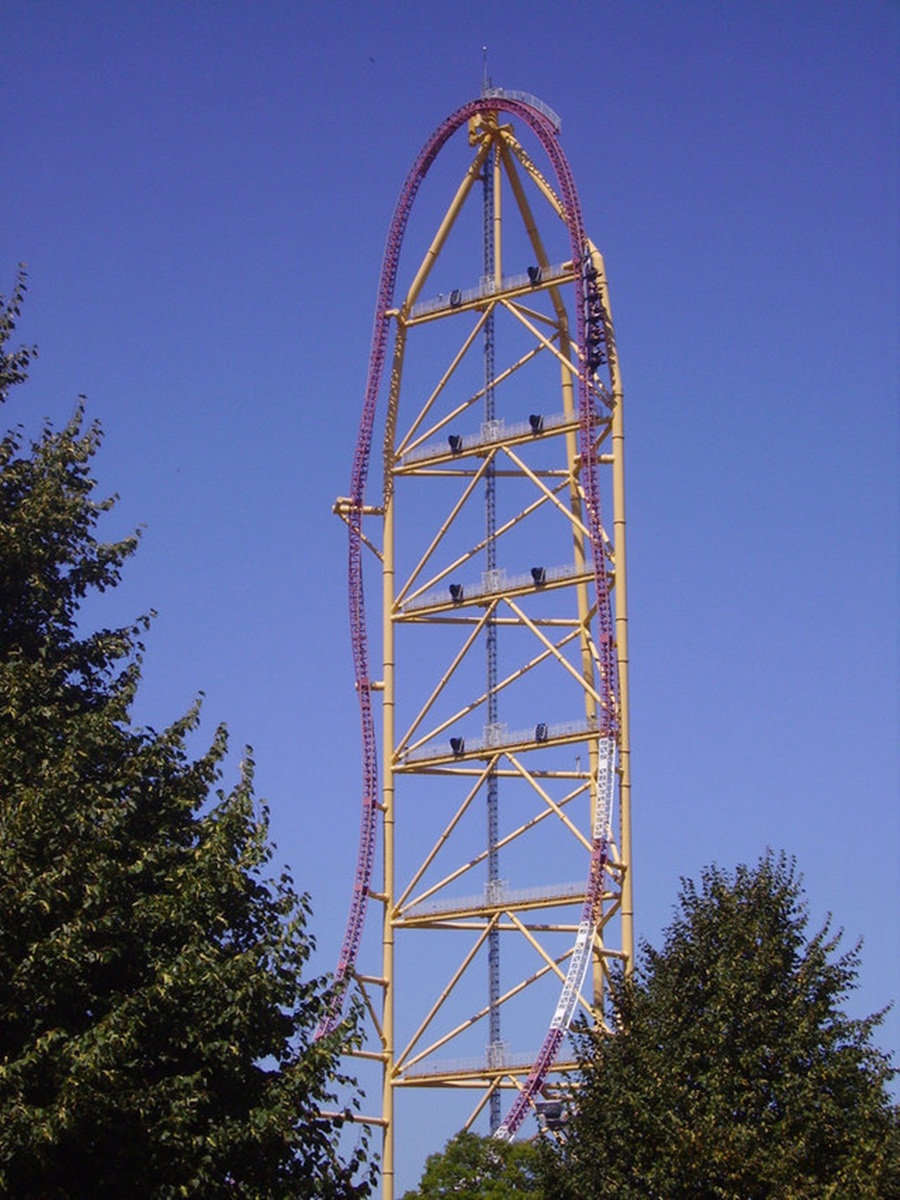 Propel riders forward after a short countdown, shooting them up and over a massive hill in 90 seconds. 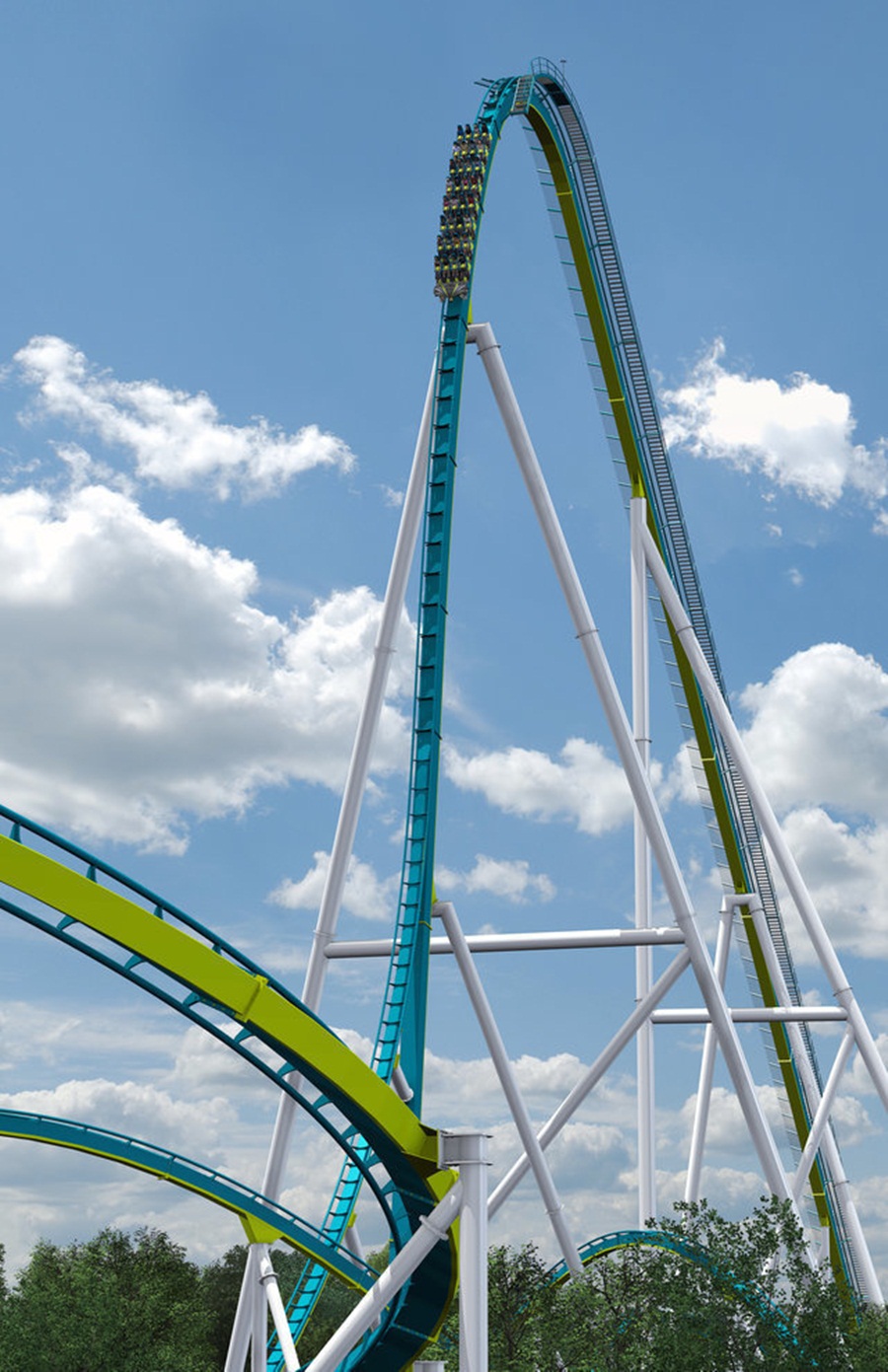 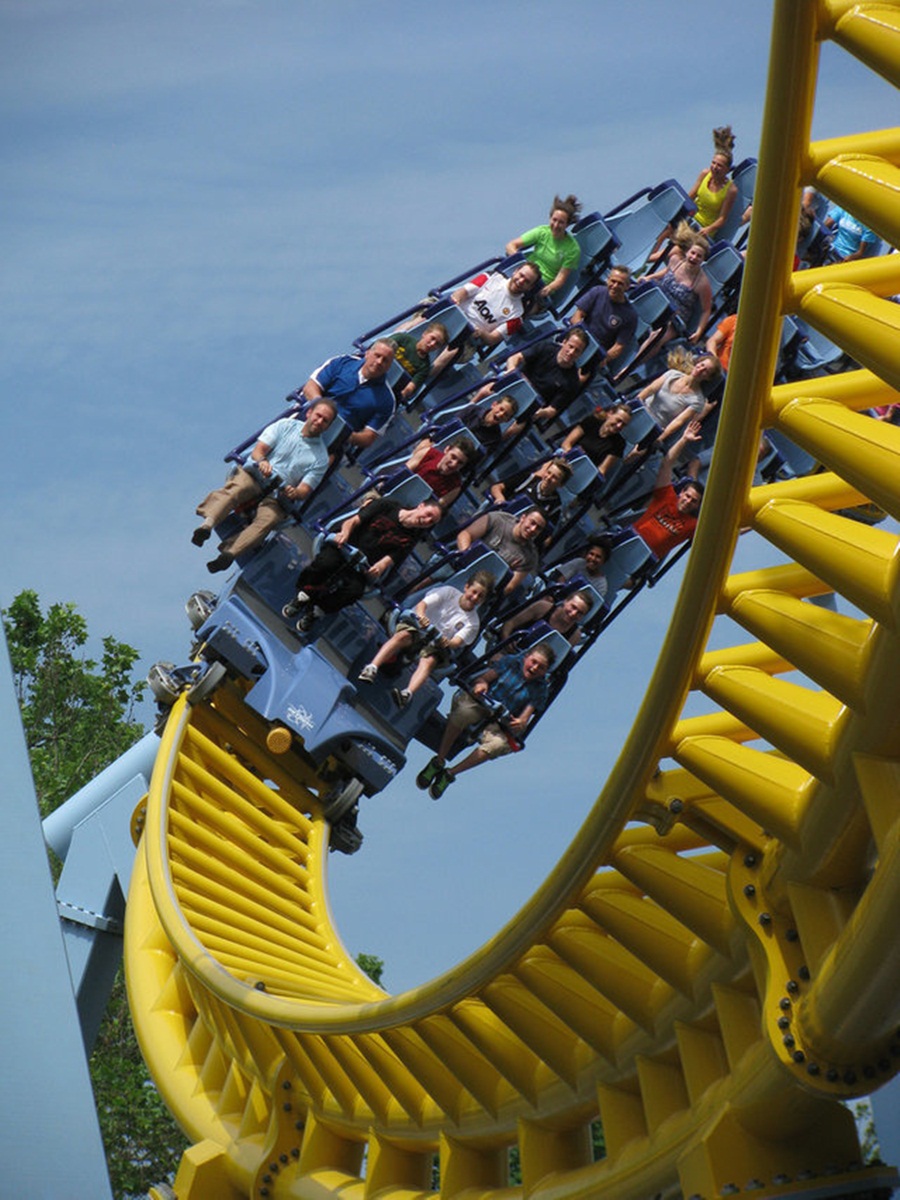 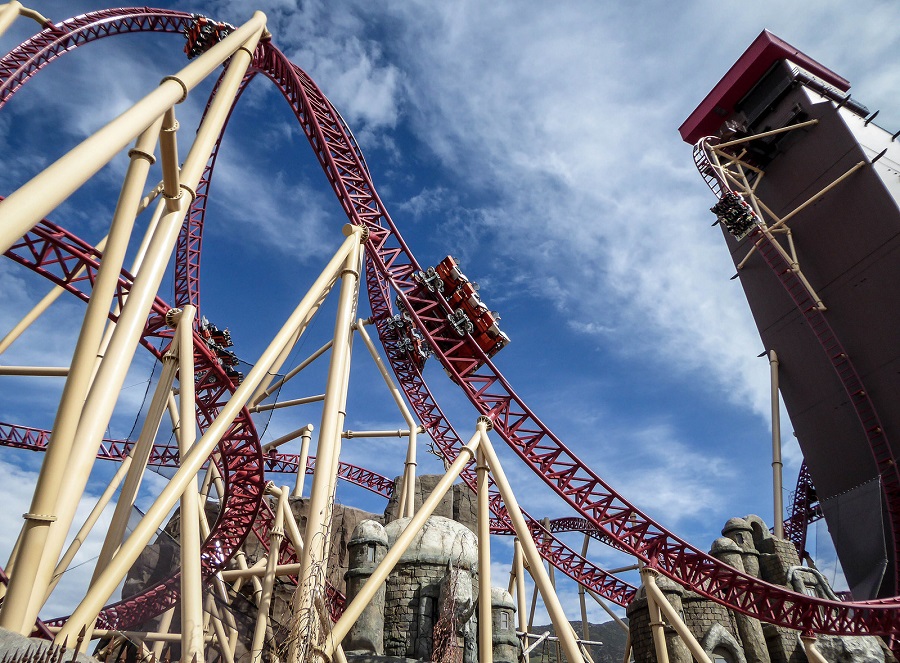 Lifts riders 208 feet and plunges them into a 116-degree concave vertical free-fall before shooting the car into an underground tunnel. 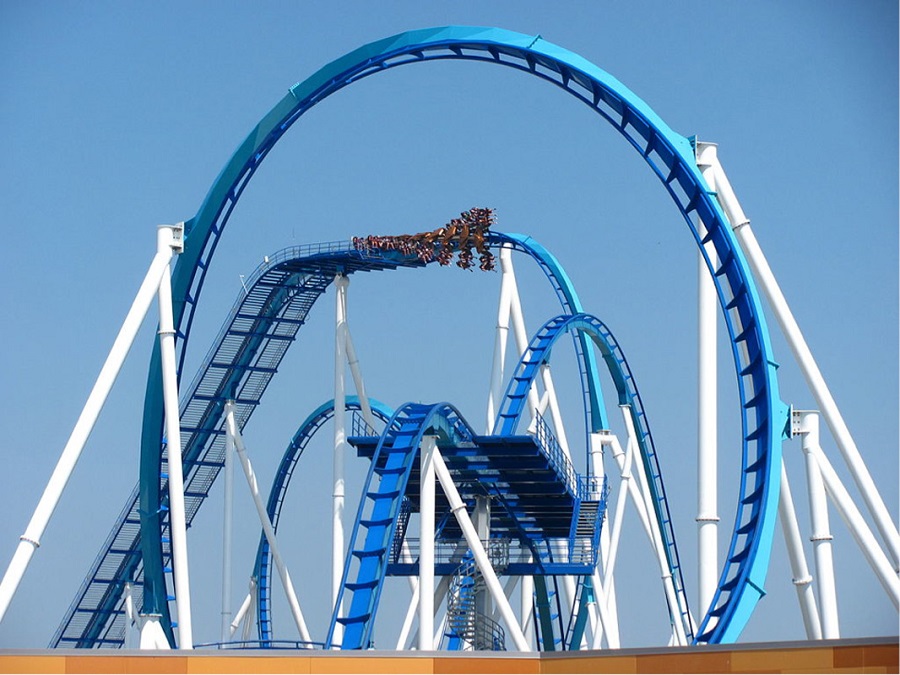 An inversion on a coaster is where the riders are fully turned upside down with their heads pointing to the ground and feet towards the sky. Located in Cedar Point Park in the USA, The Gatekeeper boasts of the highest such point where riders are inverted – at a whopping 170 feet above the ground. The inversion is followed by a dive drop, a near weightless experience, which is sure to make even the most intrepid adventurers scream their lungs out. The Gatekeeper has been holding this record since May 2013. 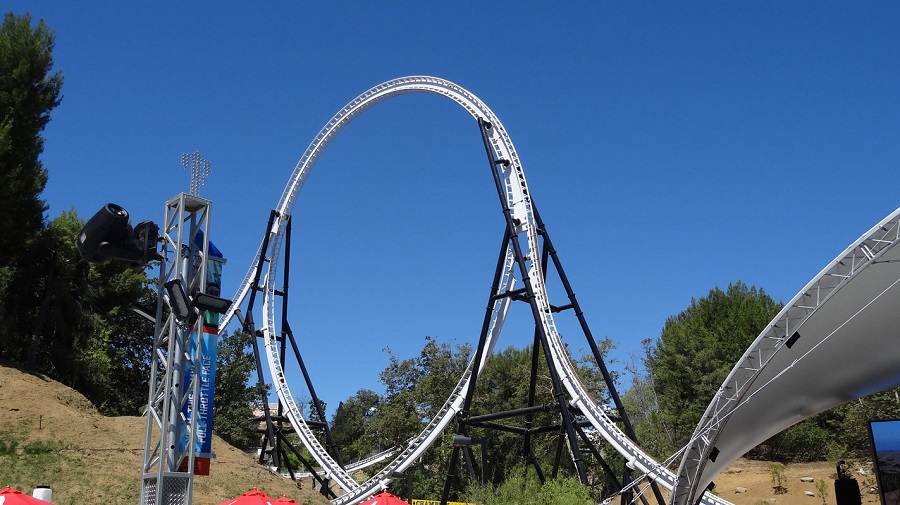 The Full ride Throttle is located in Six Flags Magic Mountain in the United States. This has the highest complete loop among all coasters with an inversion and is second only to the Gatekeeper in height. 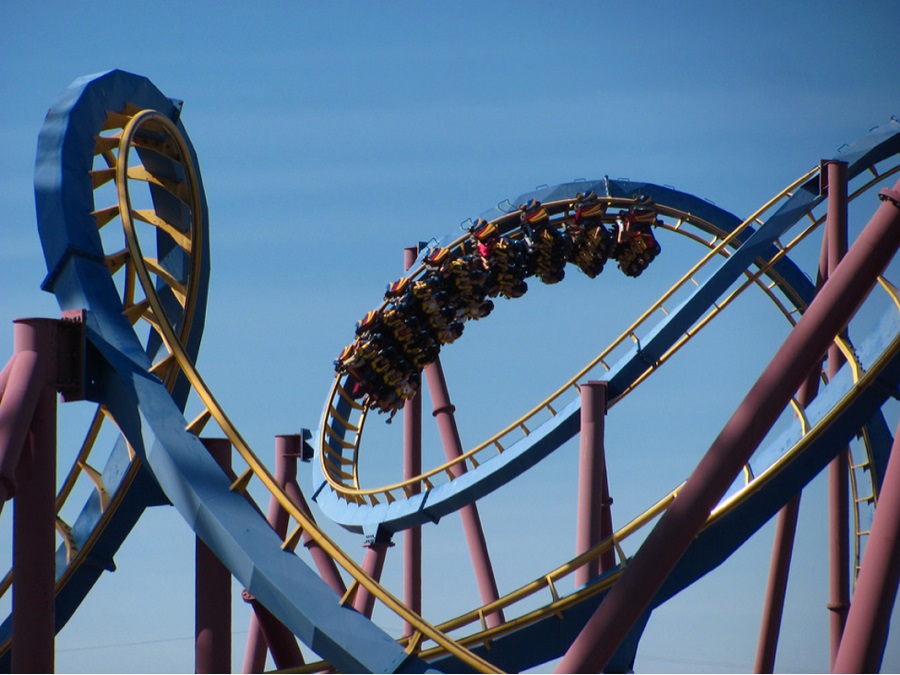 The height of the inverted loop is 160 feet from the ground, and it is genuinely a gut-wrenching experience. This ride has been holding this record since June 2013. 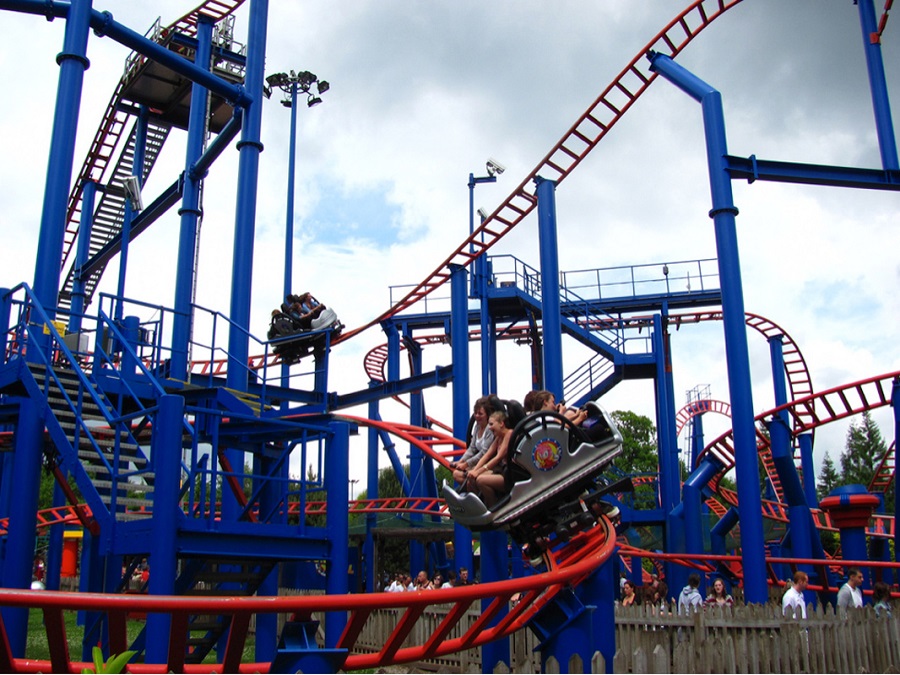 As if one tall vertical inversion wasn’t bad enough, this one has 14 of them in a single ride! The Smiler – with its somewhat ironic name – is located in Alton Towers in the UK and is sure to make you beg to stop. Be sure not to eat anything before you foray into this topsy-turvy experience. This ride has held the record for the maximum number of inversions in a single ride since May 2013. 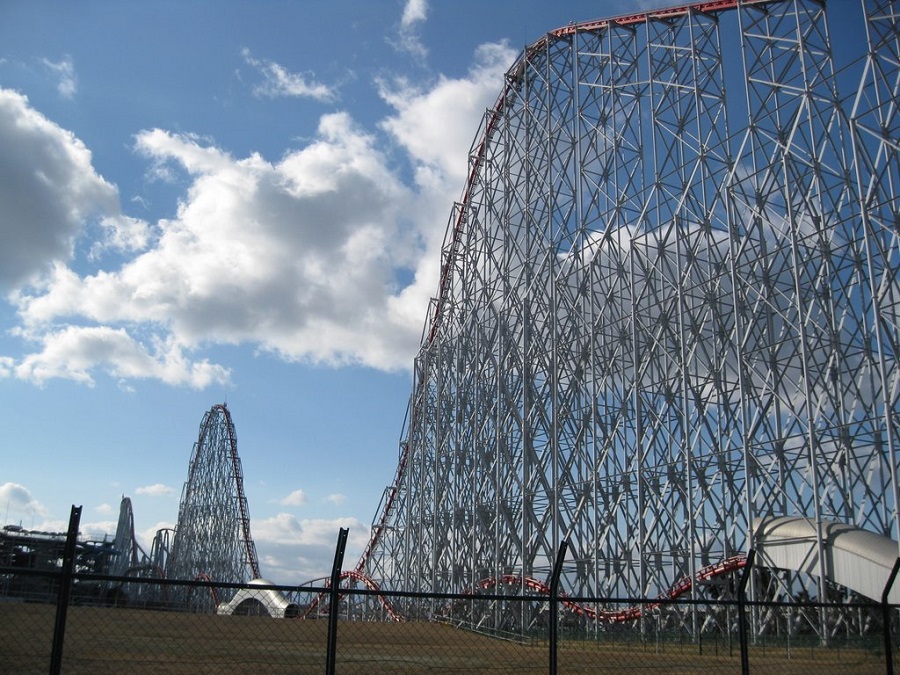 The Steel Dragon 2000 is located in Nagashima Spa Land in Japan. It has the longest track in the world – 2,479 meters. It has held this record since August 2000. While most roller coaster rides get over in a few seconds, this ride is about 4 minutes long! The Steel Dragon 2000 hurtles its riders at a top speed of 153km/h, the sixth fastest in the world, despite lasting the longest. It also includes a 306-foot fall, sure to get your heart thumping. 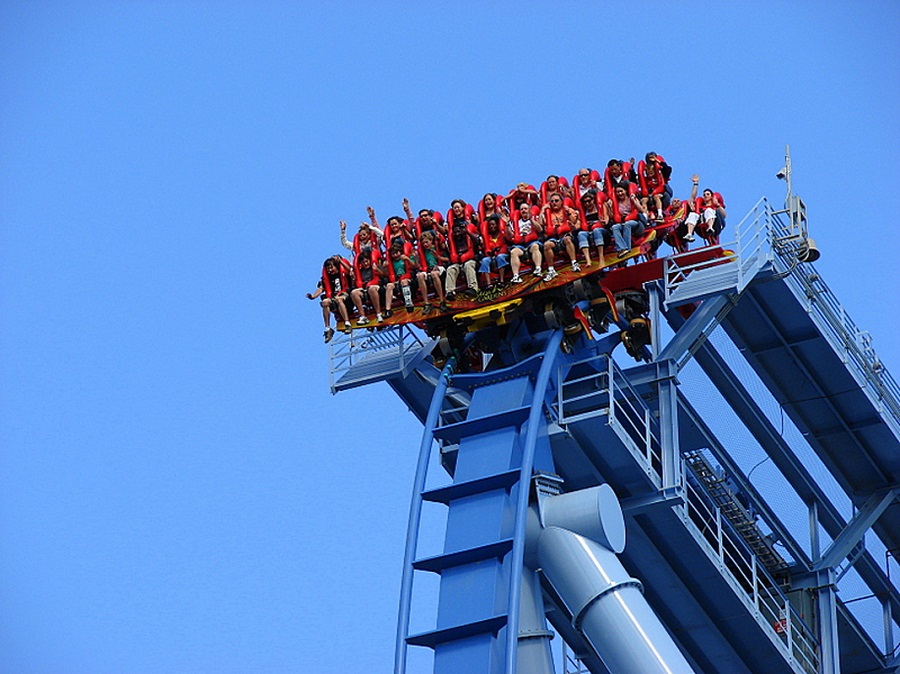 Imagine hurtling towards the earth in free fall, without any floor to support your feet! That is the experience provided by this ride. Located in Busch Gardens, Virginia, USA, The Griffon is not for the faint of heart. It gives its riders a 90-degree free fall from 205 feet above the ground. That is akin to falling from a 20-story building! Not only that, but the coaster also has the sixth highest vertical inversion in the world at 146 feet.

20 Artists Who Took Embroidery To The Next Level

Chair Made From A Recycled Boeing 737 Engine

Chair Made From A Recycled Boeing 737 Engine