From floral backdrops to contemporary graphic motifs, these spaces get a boost from perfectly patterned walls.

“This wallpaper and I are fighting a duel to the death,” Oscar Wilde once said, a few weeks before he passed away, in a cheap hotel in Paris. “One or the other of us has to go.” It’s hard to imagine that anything could inspire such passion in a dying man—let alone a wall covering. But the truth is wallpaper can make or break a room, rendering it timelessly chic or permanently tragic. We sifted through the AD archives to find 30 rooms in which wallpaper plays a starring role. In these thoughtful spaces, the element acts as both scene-stealer and backdrop, drawing the eye and adding dimension while allowing the drama of life to unfold against an all-too-beautiful setting. From unexpected stairways and powder rooms to decadent master suites and living rooms, each design elicits a different response: subtle romance, vibrant energy, urbane glam. Whichever resonates with you, rest assured: This trend isn’t going anywhere.Shown: In Ali Wentworth and George Stephanopoulos’s Manhattan apartment, which was designed by Michael S. Smith, hand-painted chinoiserie wallpaper by Gracie forms a backdrop to the master suite’s Italian neoclassical bed, which is dressed in Nancy Koltes linens. (H/T: Architectural Digest) 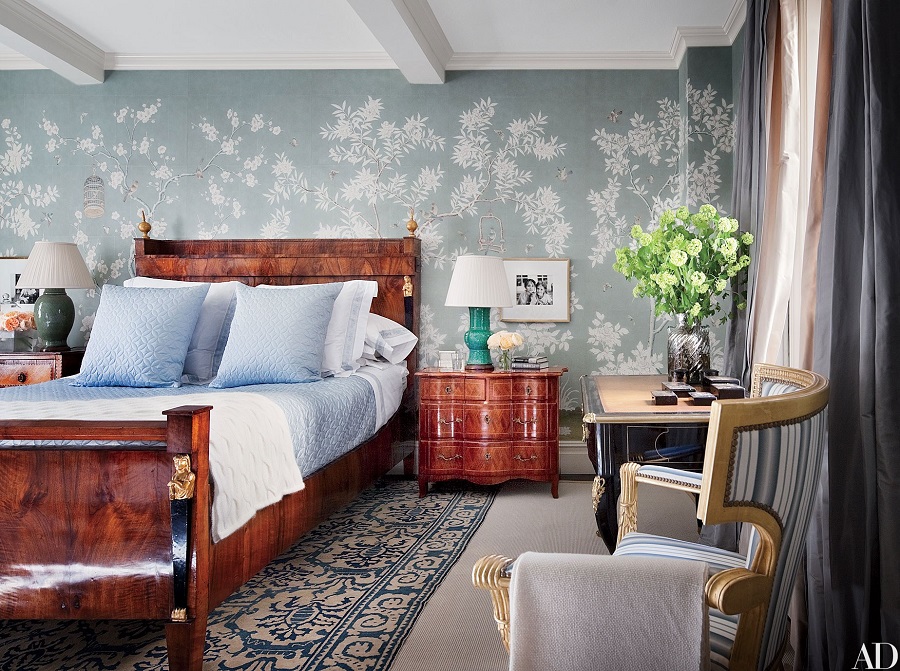 The powder room of a house in Monte Carlo designed by Timothy Whealon features Phillip Jeffries wallpaper and Dornbracht fittings. 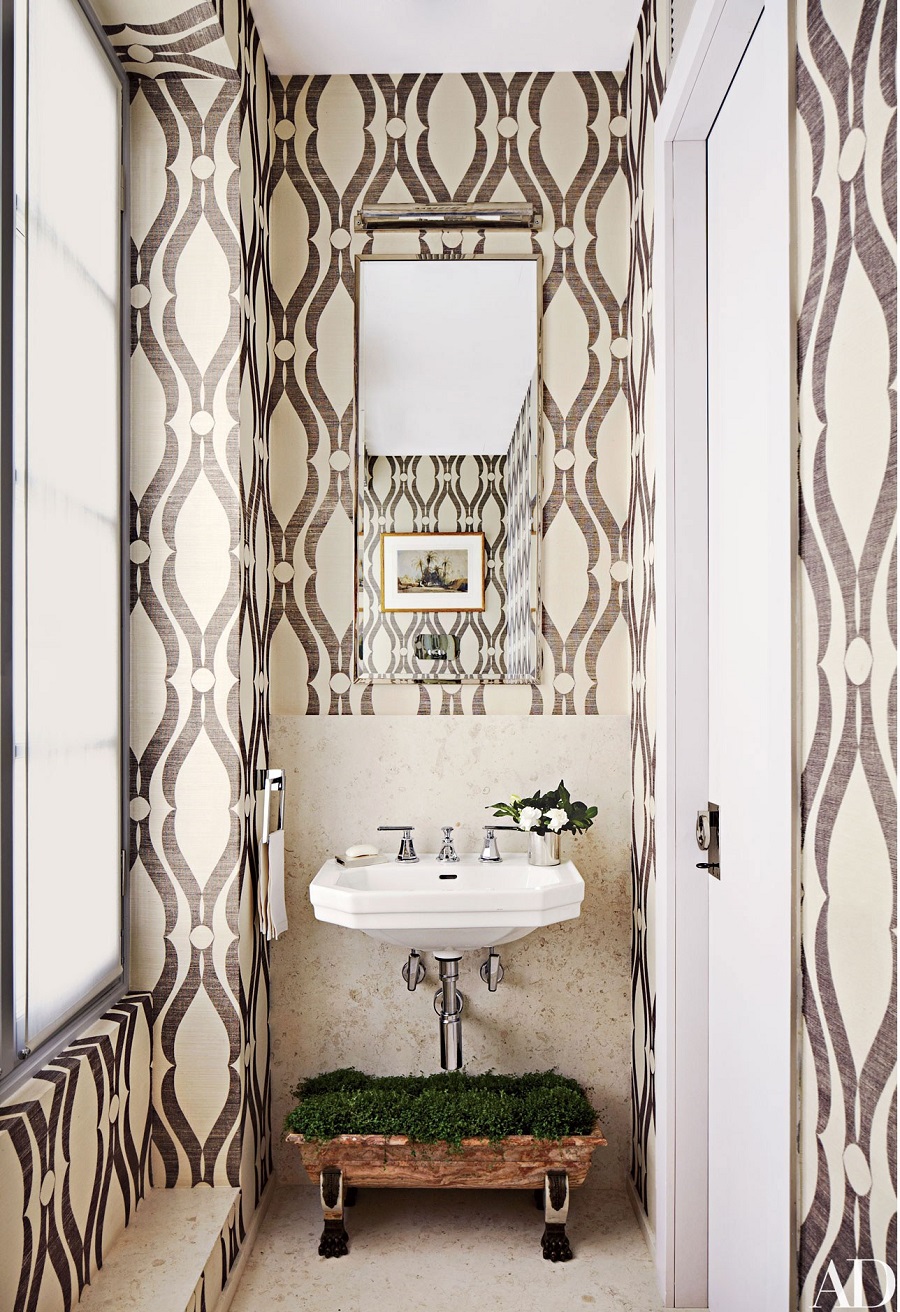 In the master bedroom of a Mississippi house decorated by Richard Keith Langham, the wallpaper is from Lee Jofa; custom-embroidered curtains of a Clarence House taffeta frame the windows. 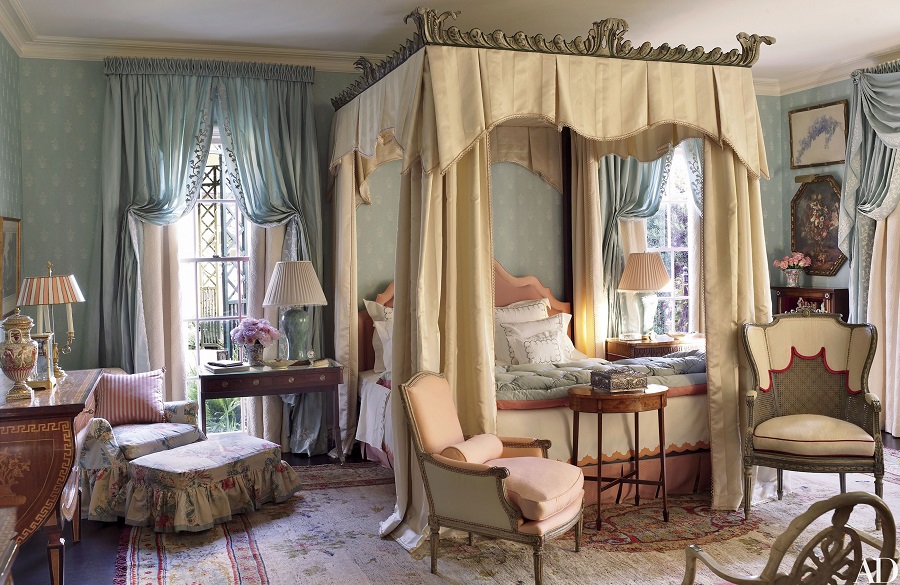 French scenic wallpapers introduce exotic panoramas to the entrance hall and staircase of a 1754 Georgian residence in Washington, D.C., which was redecorated by Gomez Associates. 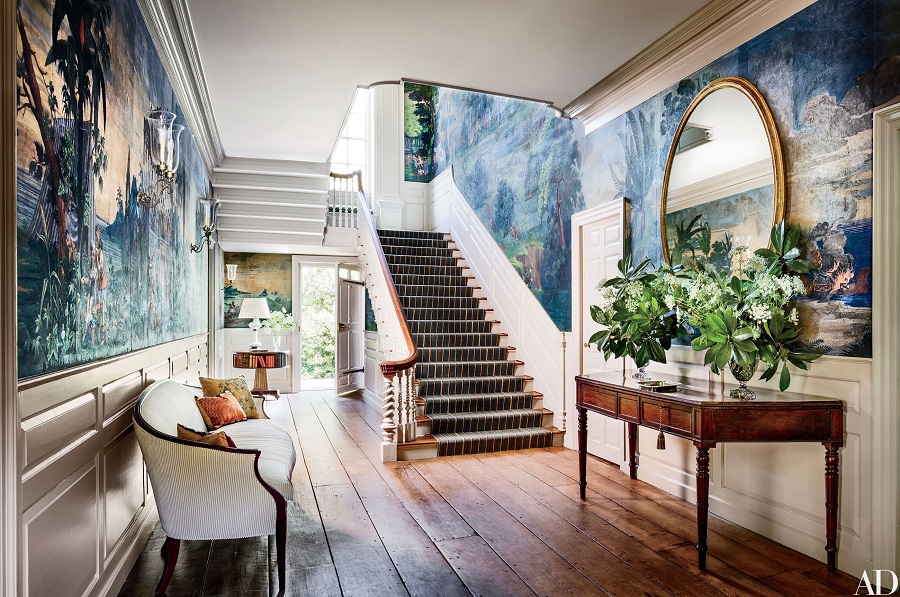 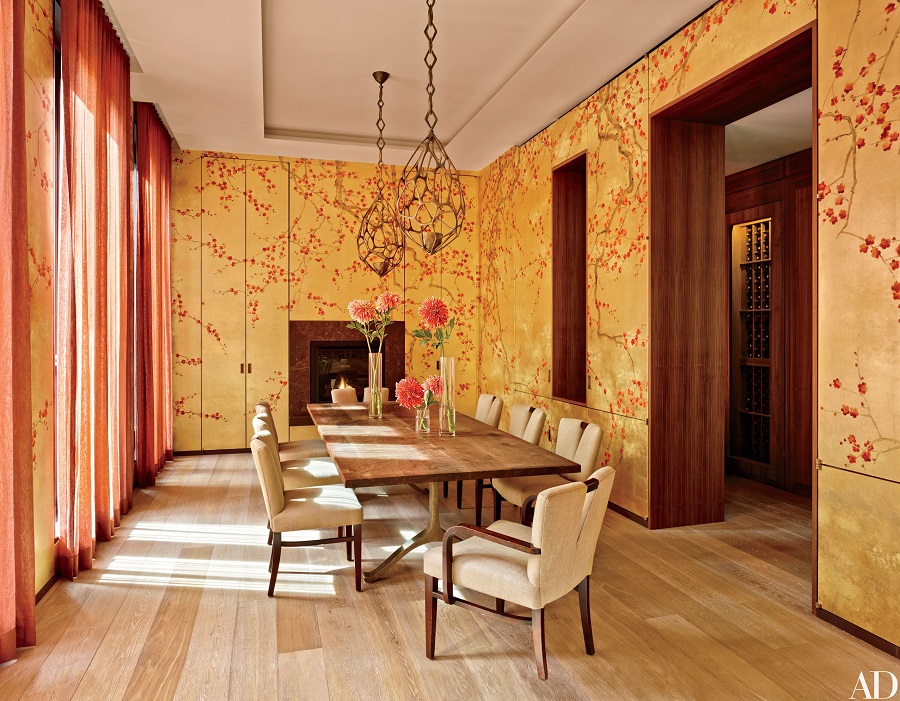 In a Los Angeles house designed by Michael S. Smith, a Gracie wallpaper depicting views of the Turkish coastline animates the dining room, which is furnished with a 19th-century cupboard from Niall Smith Antiques, George I–style chairs, and a dining table by Jasper. 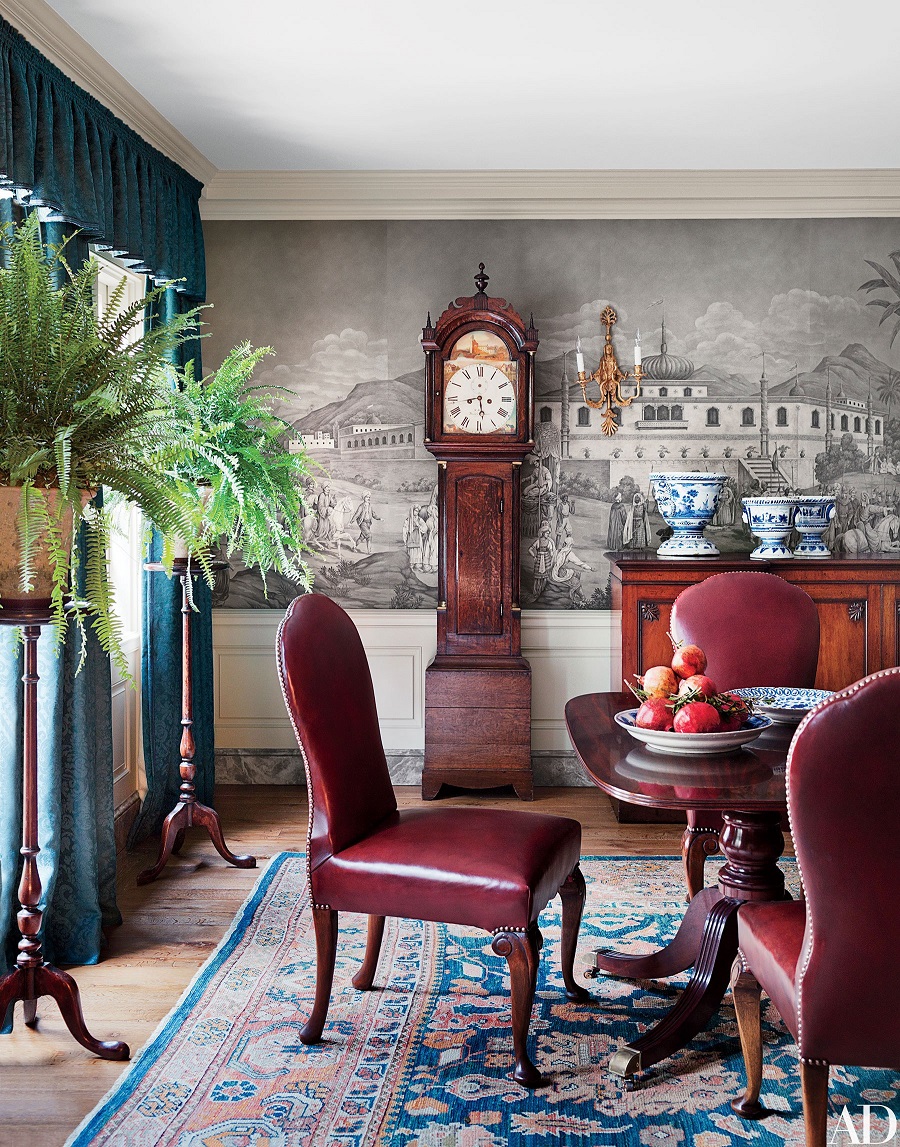 Schweitzer linens dress the bed in the master suite of a Connecticut homedesigned by Miles Redd. The floral theme of the de Gournay wallpaper is matched by the Bennison fabric on the Louis XVI side chair. 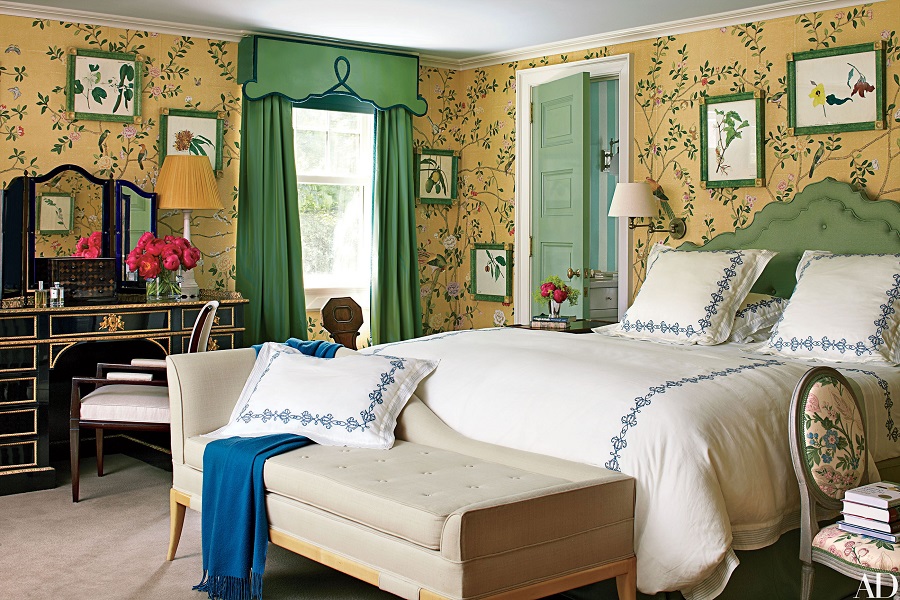 In the entry hall of a Chicago apartment designed by Jean-Louis Deniot, the wallpaper is by Zoffany, the sunburst mirror is by Van der Straeten from Ralph Pucci International, and the mirrored marble-top console is a Serge Roche–inspired design by Deniot. 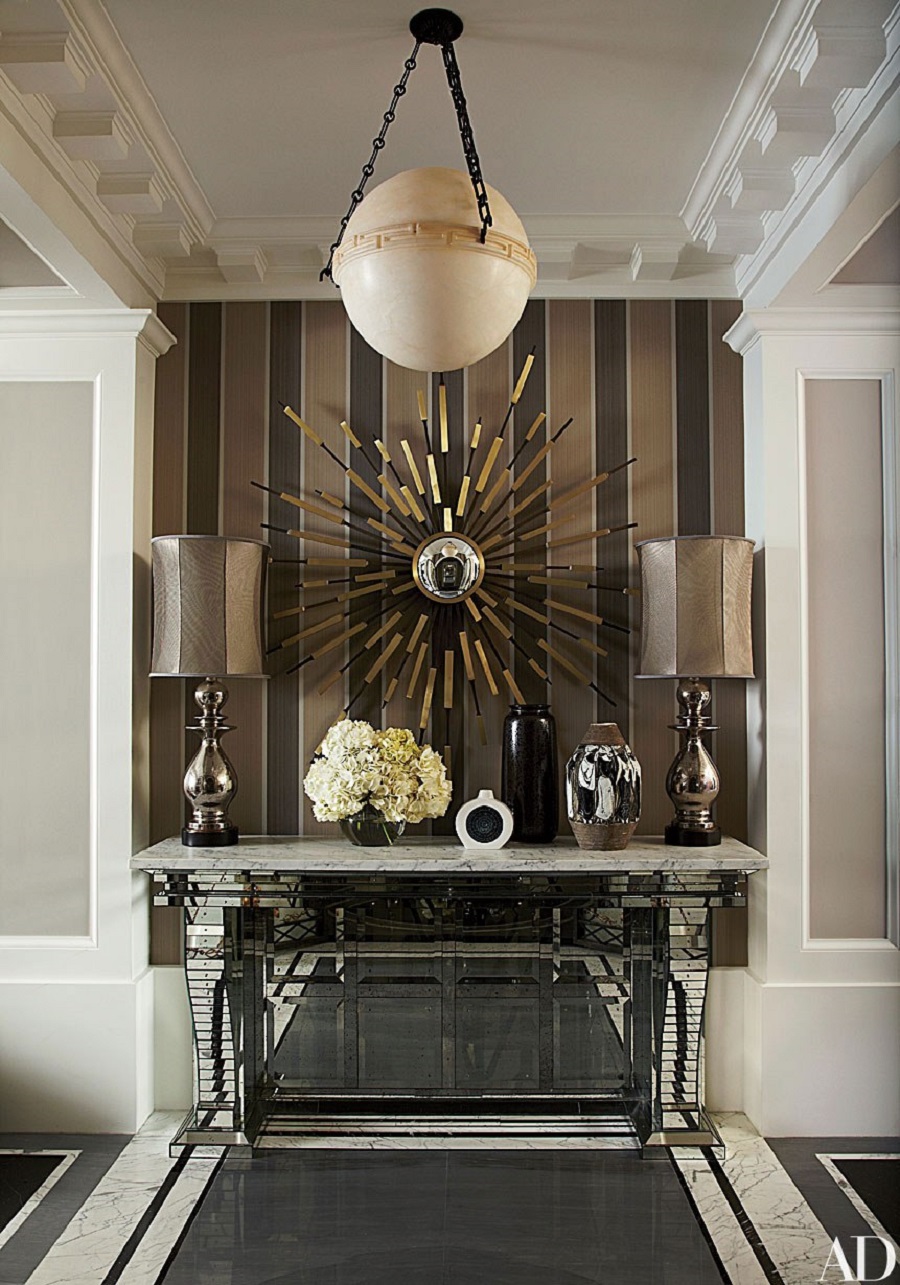 In Victoria Hagan’s Connecticut home, Gracie wallpaper transforms the powder room into a garden; the basin and pedestal are by Urban Archaeology, and the sink fittings are by Waterworks. 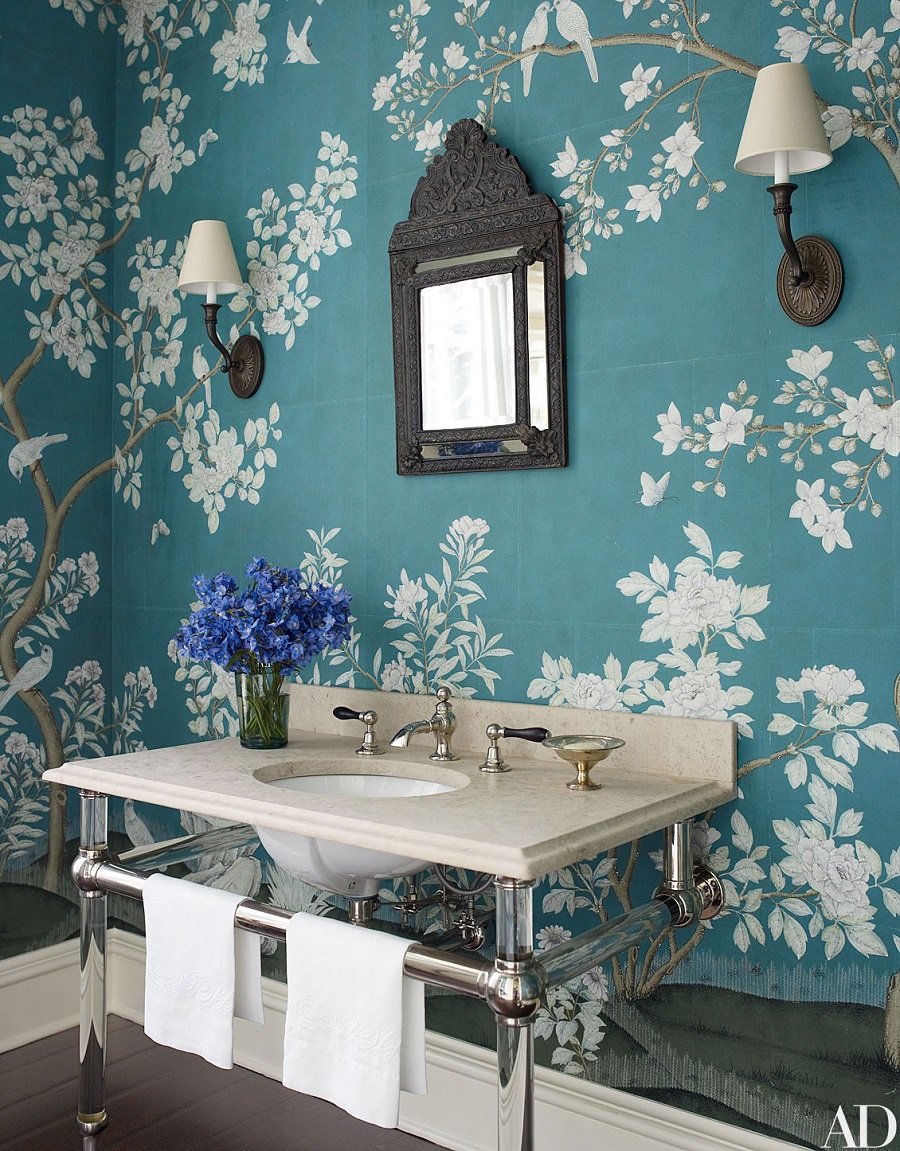 In a Manhattan apartment renovated by Edward Siegel and decorator Ernest de la Torre, a wallpaper conceived by De la Torre and custom made by de Gournay decorates the three-story stairwell. 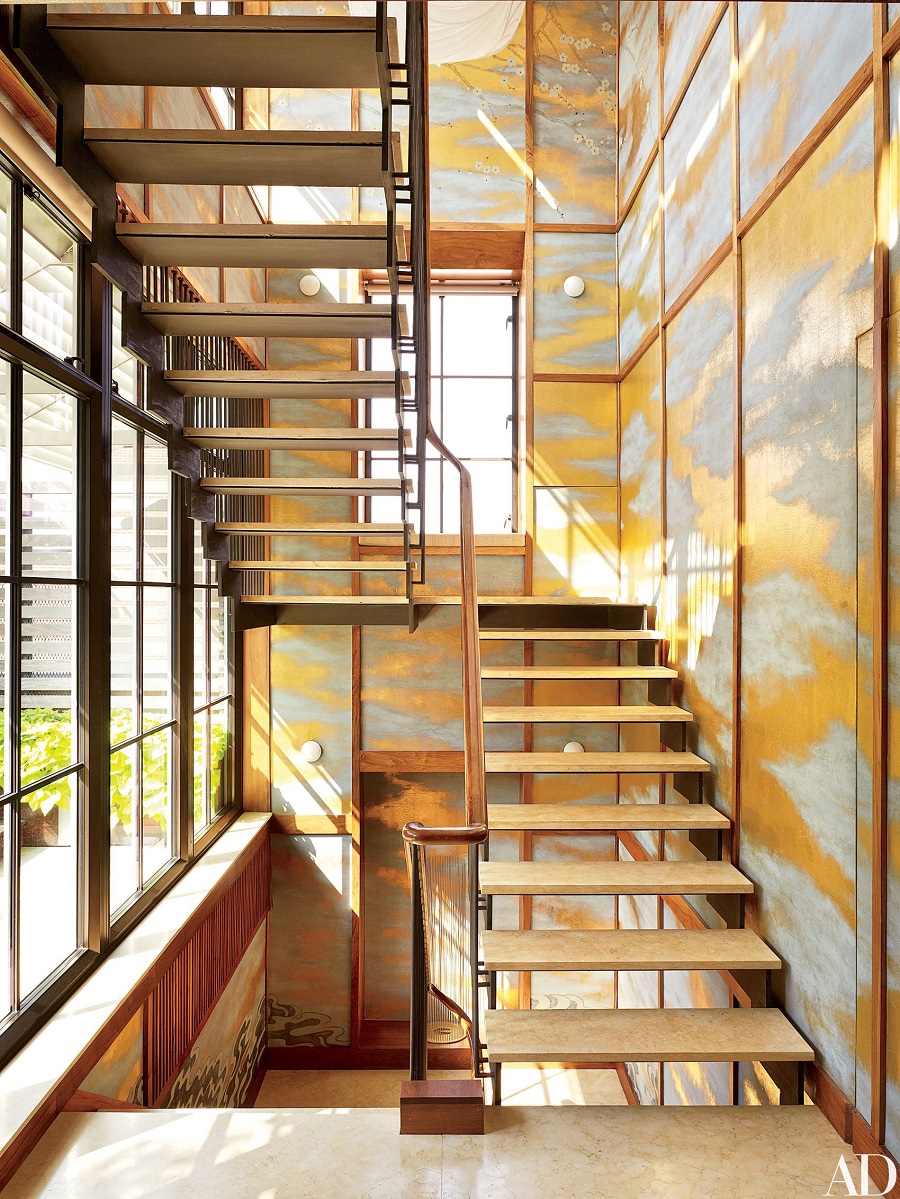 A Cy Twombly “Blackboard” painting and a small geometric Franz Kline play off the hand-painted Gracie scenic wallpaper in the dining room of a Philadelphia-area house designed by Thomas Jayne. 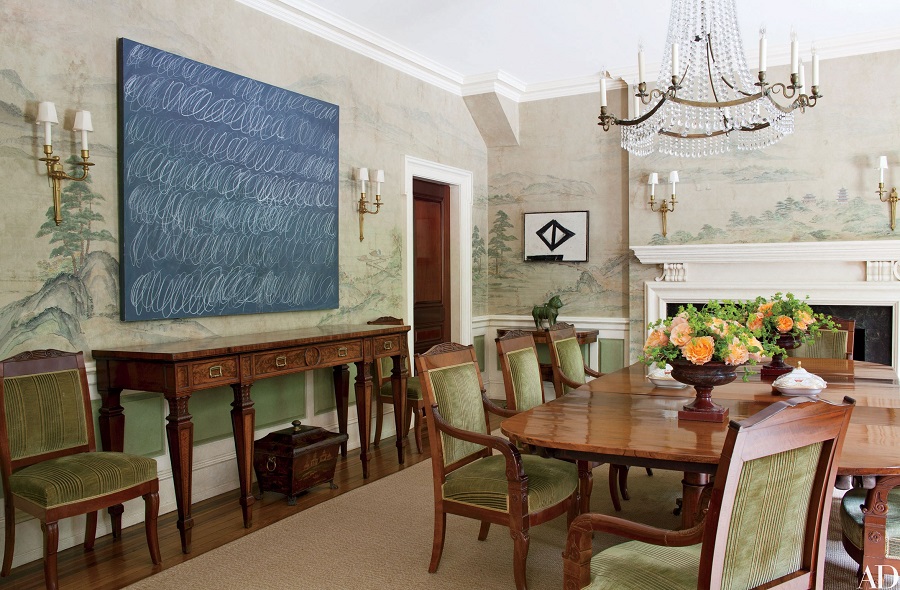 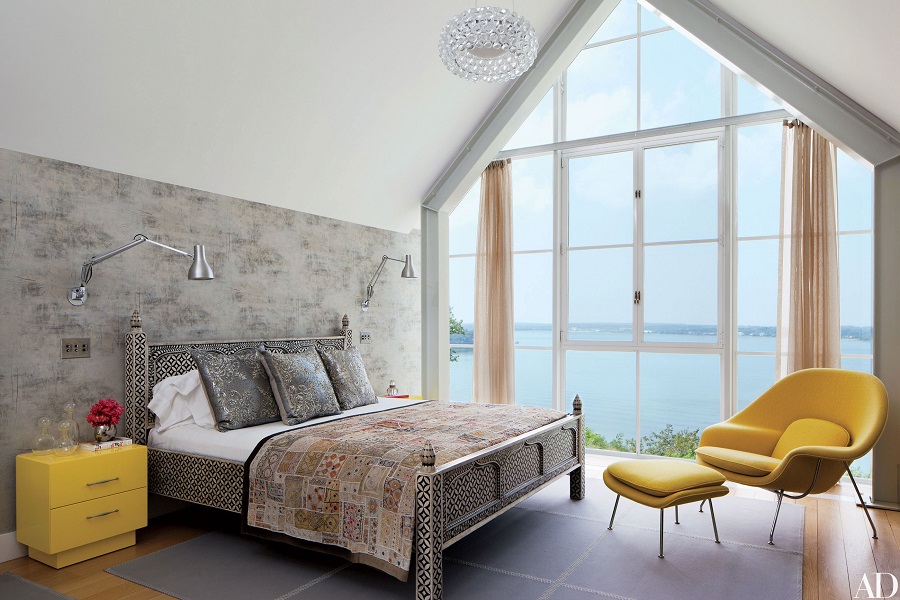 Chinoiserie wallpaper by de Gournay lines the wife’s office in a New York City home by David Kleinberg Design Associates; the Jean-Charles Moreux gueridon by the window is from Craig Van Den Brulle, and the carpet is by Tai Ping. 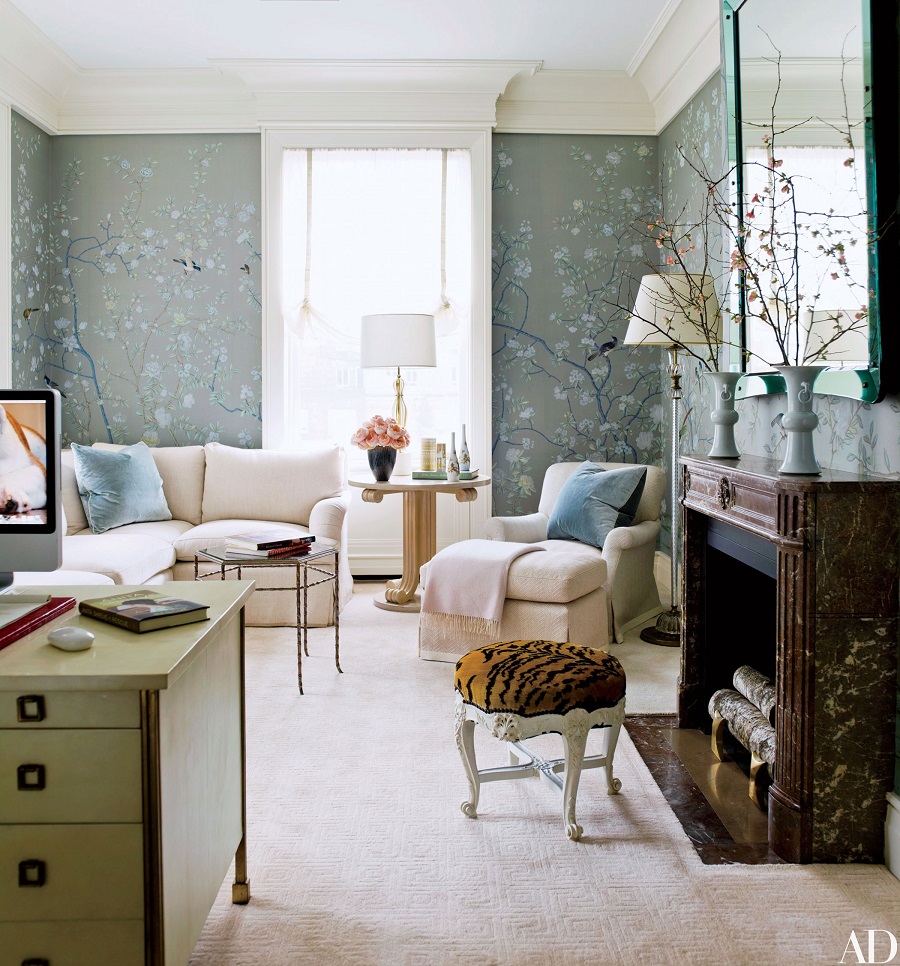 A plethora of patterns enlivens a guest room in a Greenwich, Connecticut, home designed by Miles Redd, from a Farrow & Ball wallpaper to a vintage fabric on the Louis XVI settee and chair; the swing-arm sconces and ceiling fixture are from Circa Lighting, and the table lamp is from Treillage. 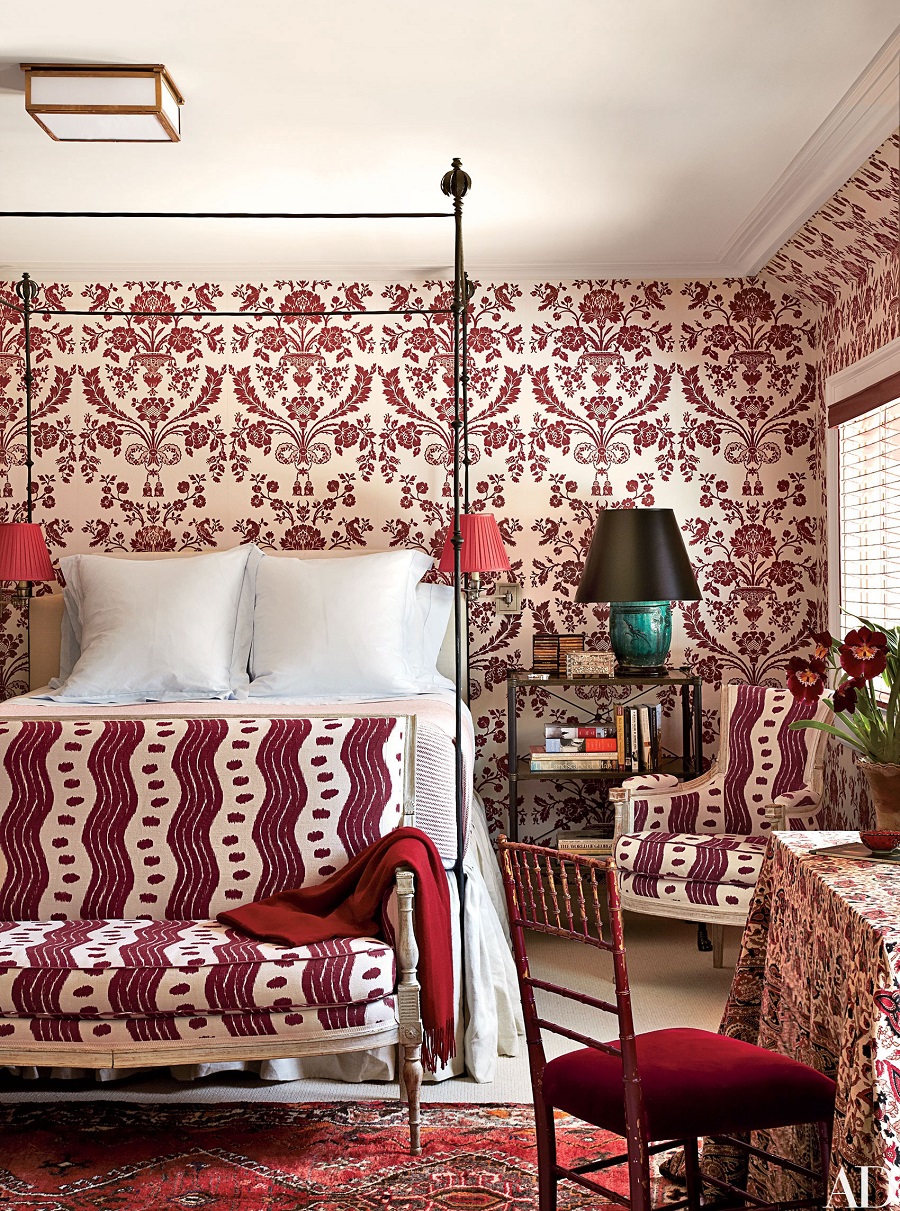 A Katie Ridder wallpaper from Holland & Sherry lines a powder room in an Atlanta home decorated by Suzanne Kasler. 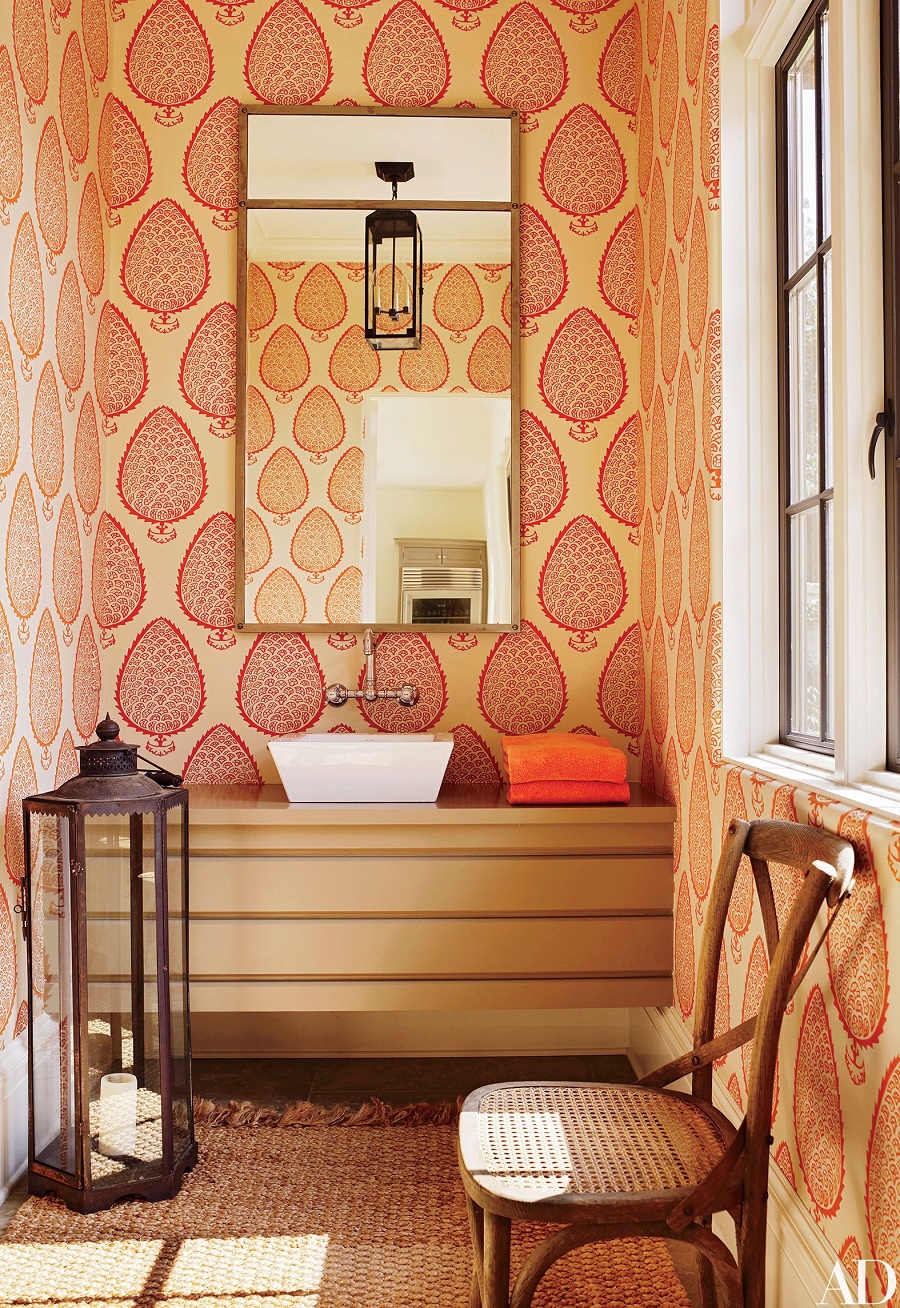 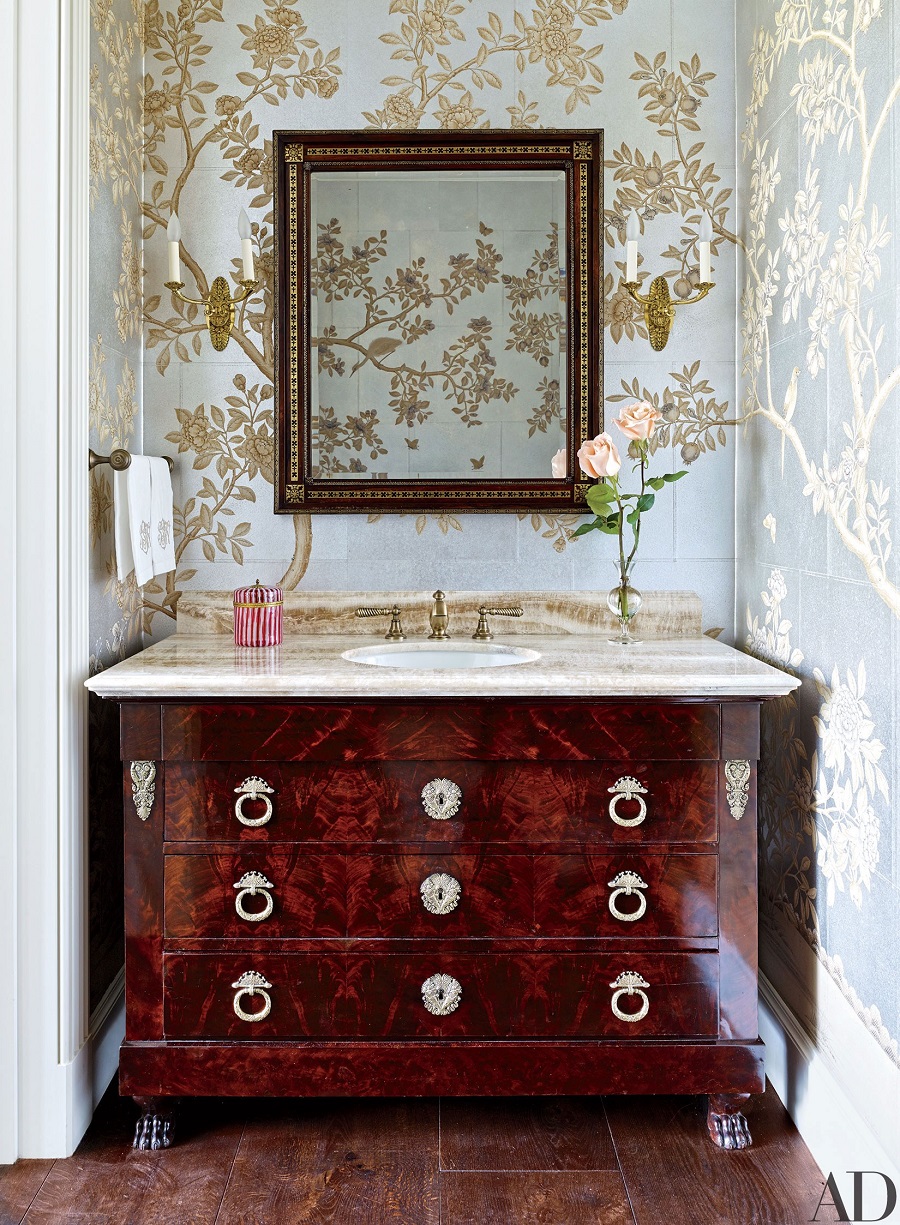 Dubbed the Bali Isle Room, the guest quarters of a cottage in the Bahamas by Andrew Raquet Interior Design combine a primitive-style China Seas wallpaper with citrus hues. 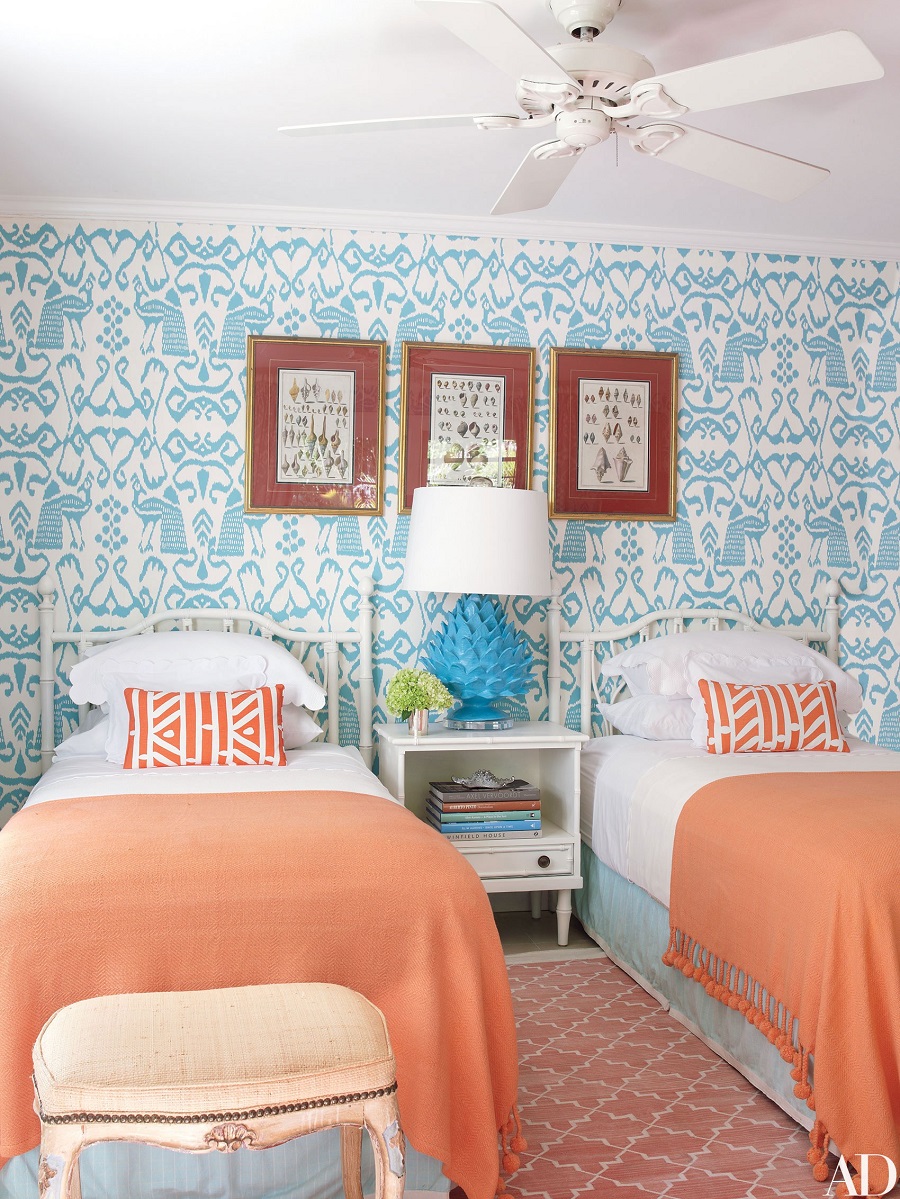 A de Gournay wallpaper lines daughter Dagny’s room in the Texas home of designer Sara Story; the vintage chair is covered in a Josef Frank linen from Svenskt Tenn. 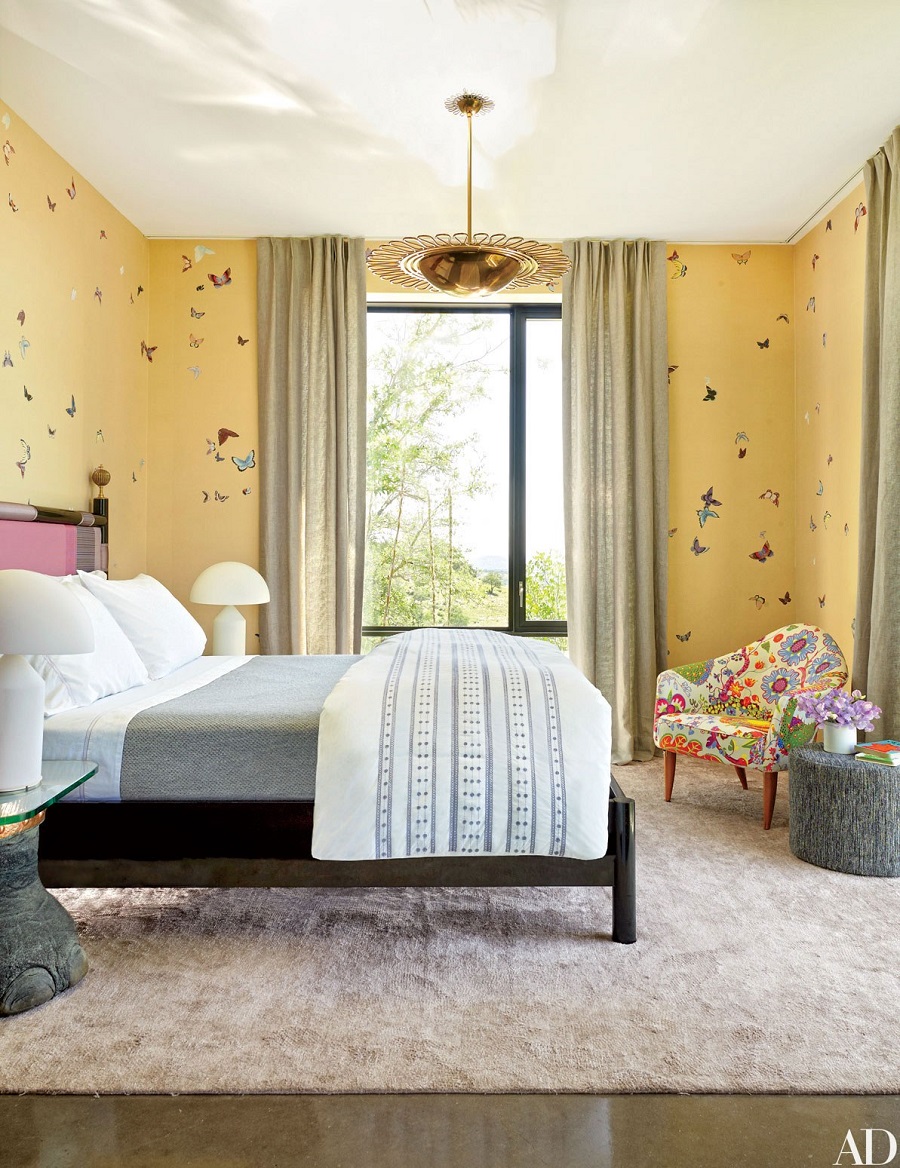 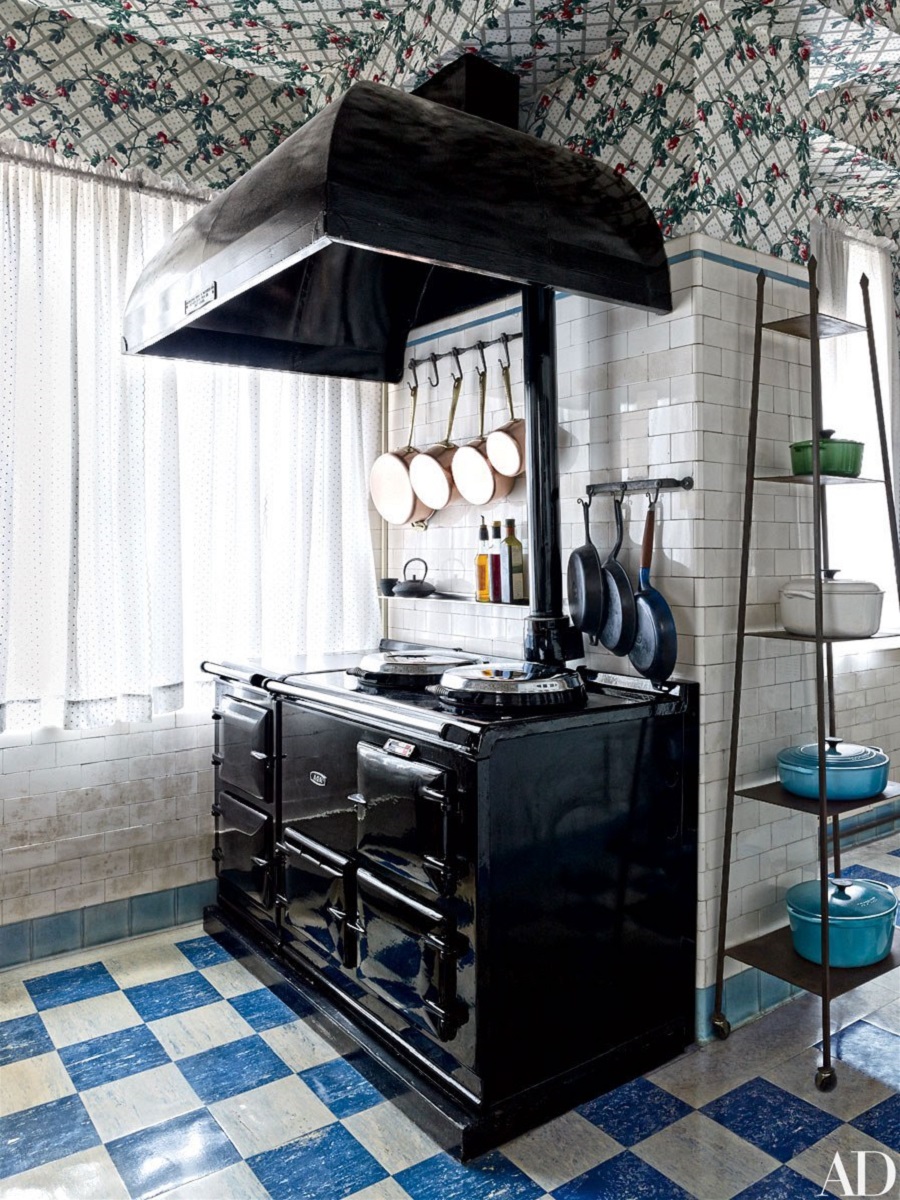 A guest room in designer Ray Booth’s Nashville home features a Groundworks wallpaper from Lee Jofa and a custom-made bed. 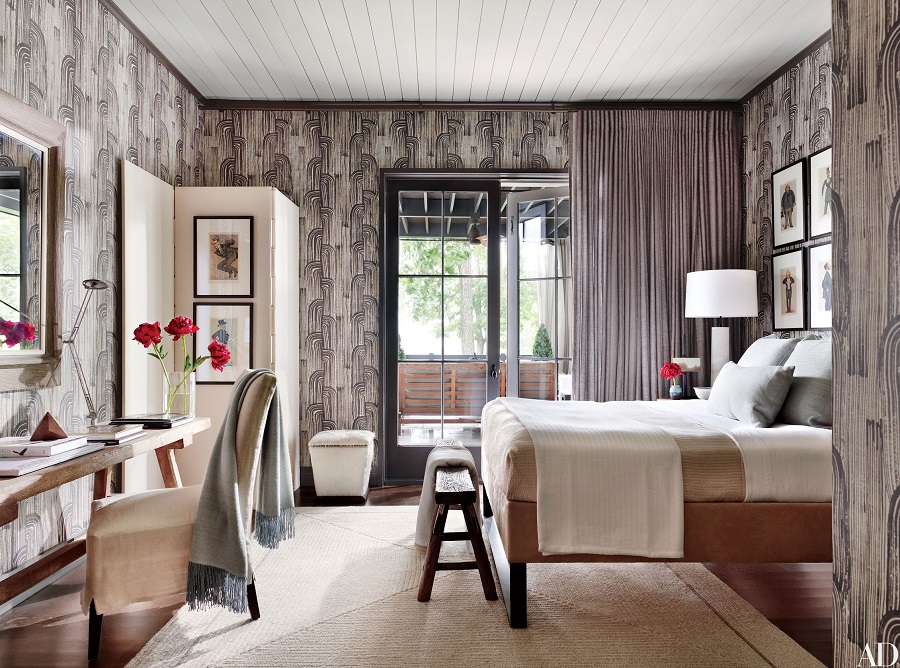 An Elizabeth Dow striped wallpaper adds a tailored look to a Los Angeles master bath designed by Michael S. Smith; the mirror is by Jasper, the tub is by Waterworks, the tub fittings are by Michael S. Smith for Kallista, and the teak trolley is from Lee Stanton Antiques. 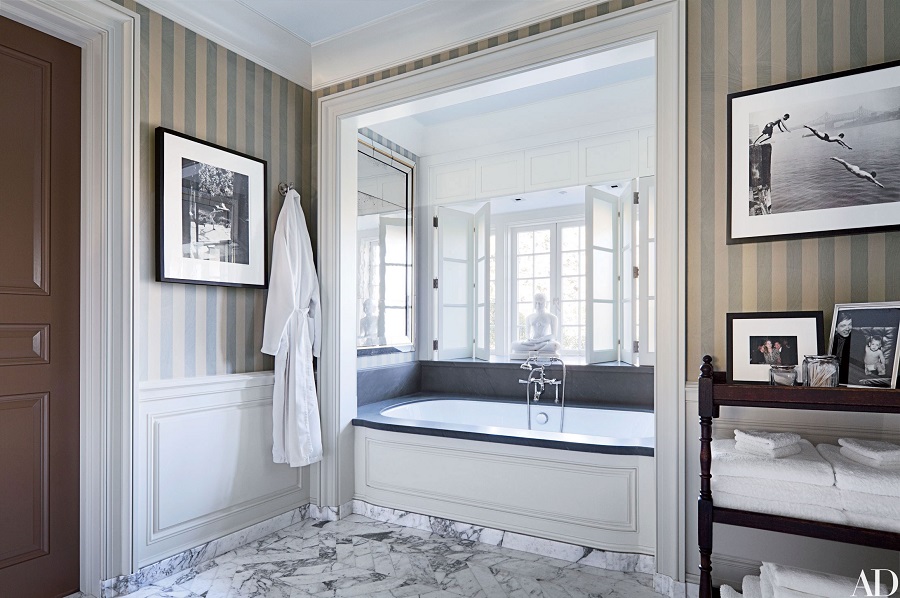 The office in a Southampton, New York, home by Carrier and Company is clad in an Eskayel wallpaper; the brass floor lamp is from Neo-Studio, and the rug is by Sam Kasten Handweaver. 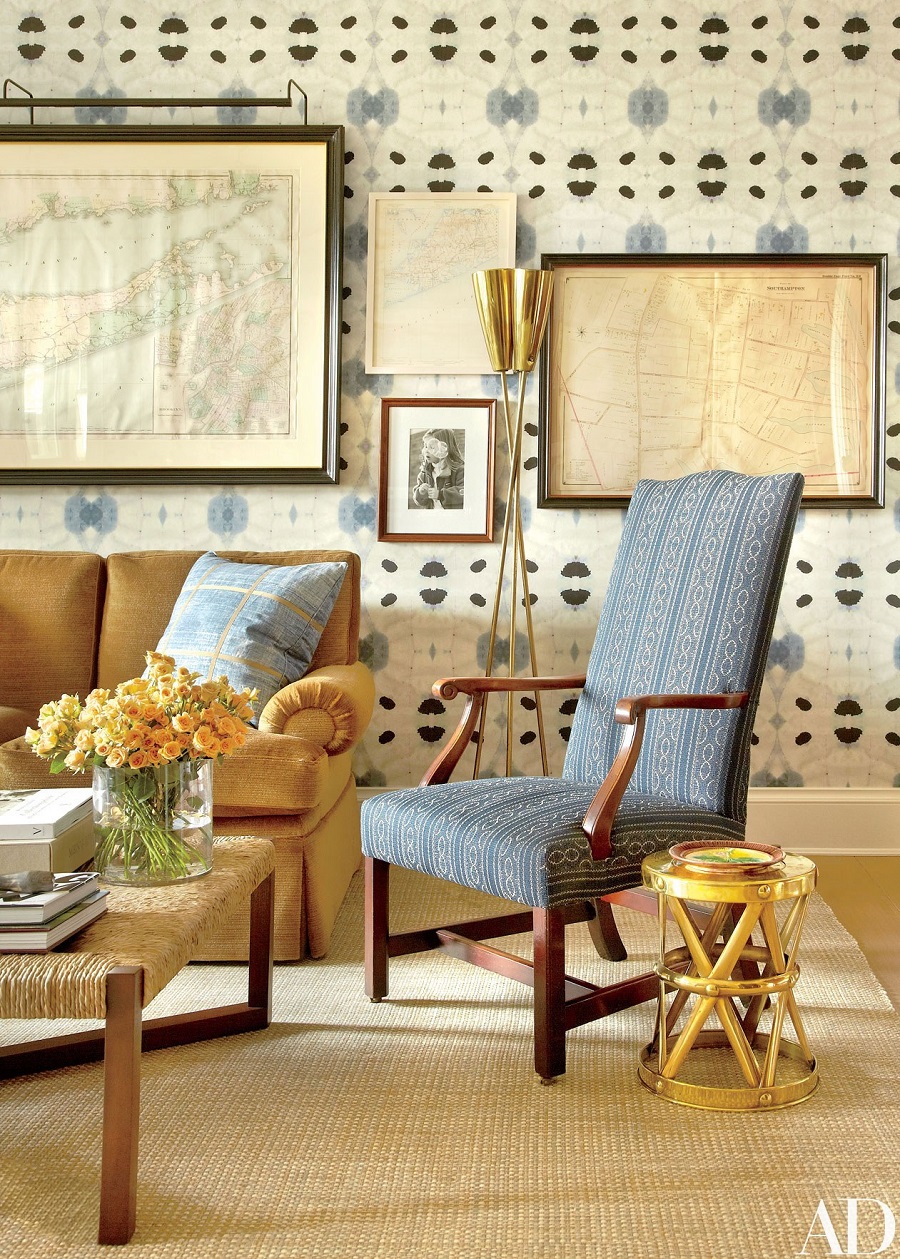 In an apartment revived by designer Mark Gillette, on a 300-year-old English country estate, the guest room is sheathed in a Colefax and Fowler wallpaper; the floor lamps are by Vaughan, and the carpeting is by Stark. 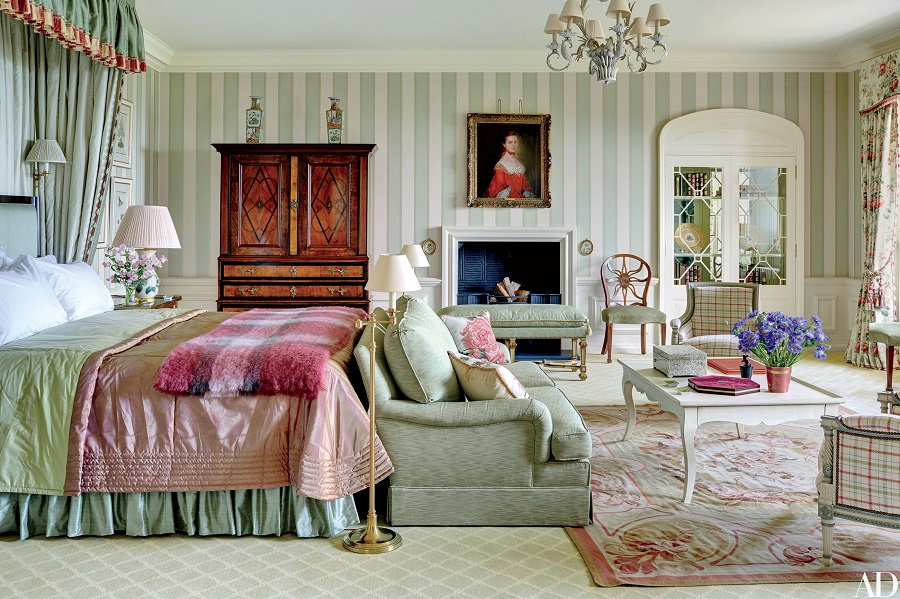 Gillette chose a wallpaper by Brunschwig & Fils to grace the master bath. 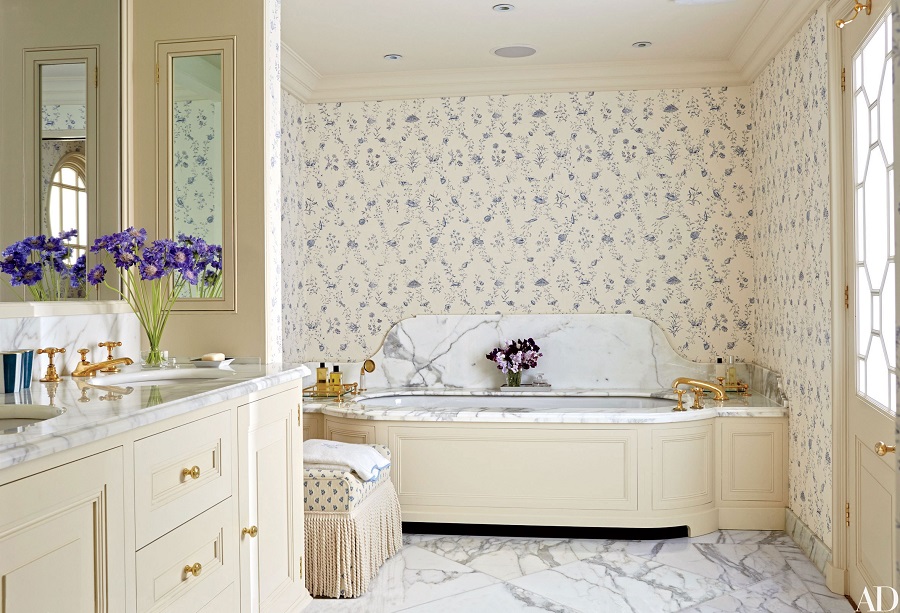 Ralph Lauren Home plaid wallpaper lines a dressing room at Late Night with Seth Meyers designed by Ashe + Leandro; the sconces are by Jason Koharik from Lawson-Fenning, and the television is by Samsung. 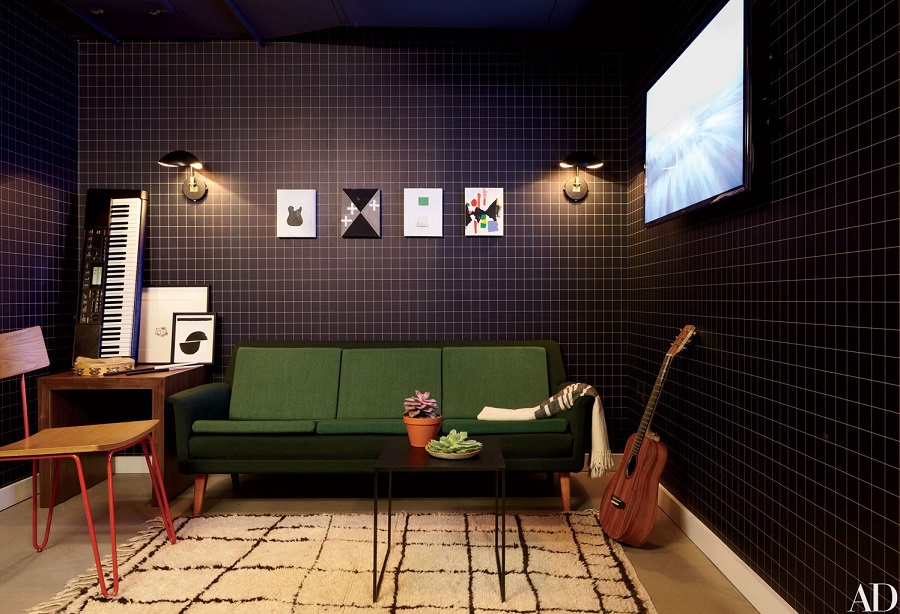 In a Brooklyn brownstone designed by Nick Olsen, children share a room lined with a Sandberg wallpaper from Stark; the Fine Arts Furniture trundle beds are dressed with RH bedding. 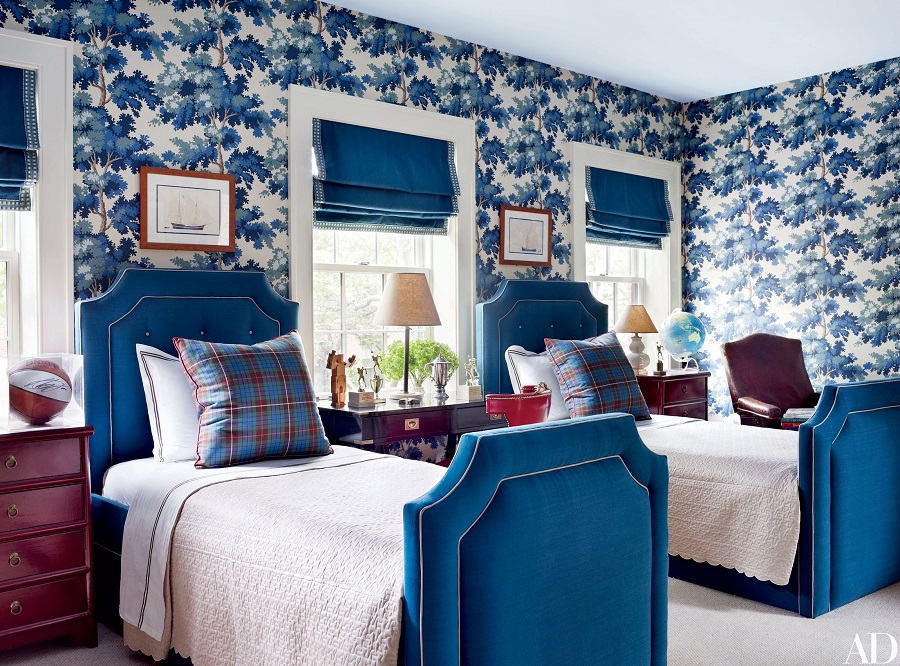 A children’s room in a Manhattan apartment by Robert A.M. Stern springs to life with a vivid Osborne & Little wallpaper. 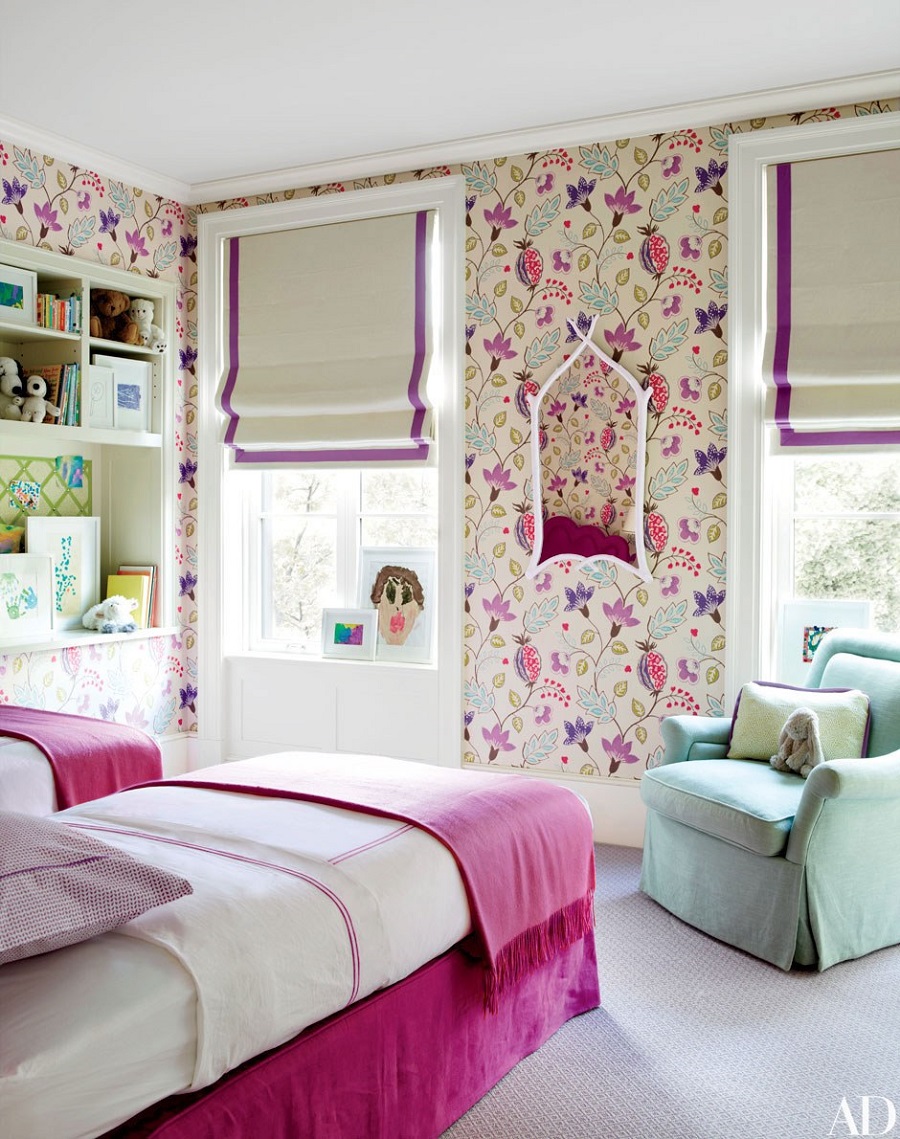 In a Hamptons house designed by Matthew Patrick Smyth, Tyler Hall wallpaper brightens a guest room, where bookshelves contain a complete set of the Penguin Classics Library; the vintage mirrors are English, and the wicker sofa’s cushions are covered in a Great Plains fabric. 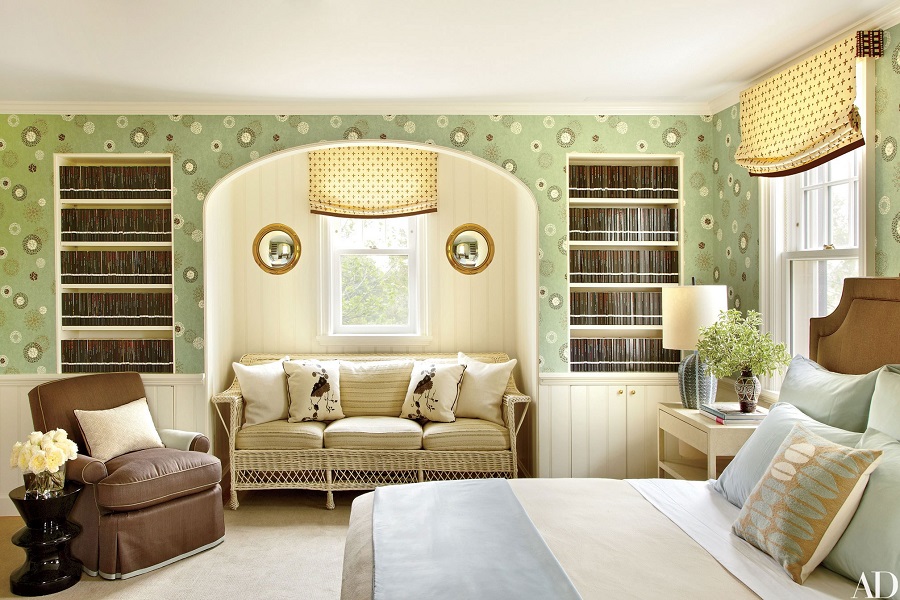 An Iksel Decorative Arts wallpaper wraps the primary family room in a Houston mansion designed by Miles Redd; the infanta painting is by Agustin Hurtado, and the chairs are slipcovered in a Schumacher ikat. 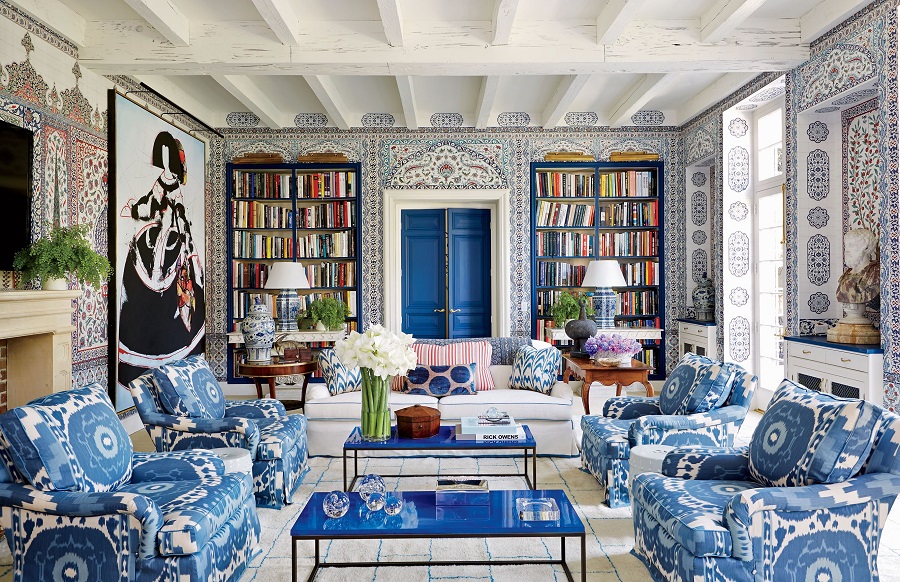 In the daughter’s room of an Adirondacks, New York, home designed by Thom Filicia, a Cavern wallpaper adds a woodsy note; the vintage beds are painted in a Benjamin Moore green, the sconces are by the Urban Electric Co., and the carpet is a Matthew Williamson design for the Rug Company. 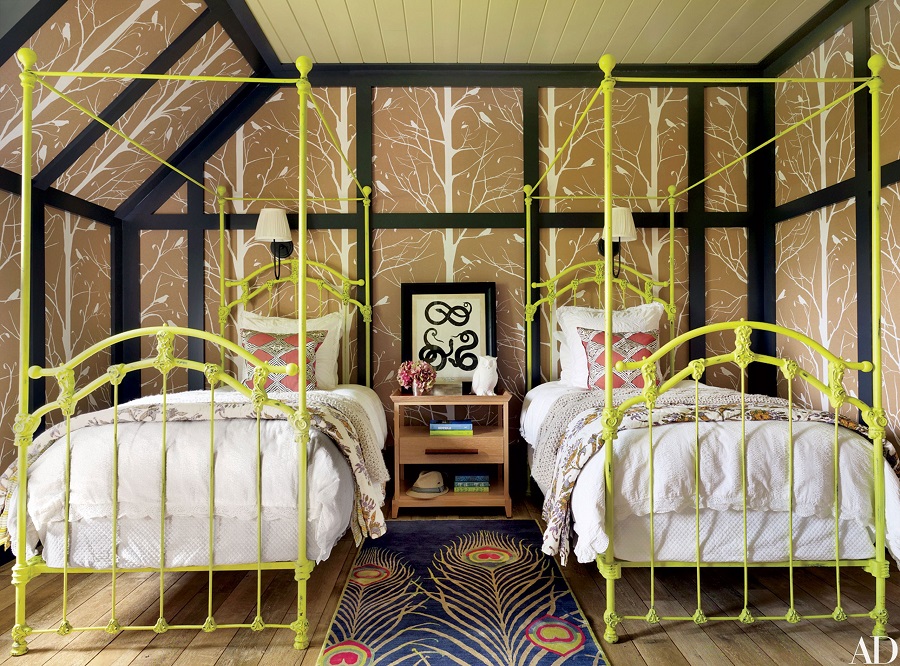