Home » Blog » 20+ Impossibly Clever New Products Everyone Needs To Own

20+ Impossibly Clever New Products Everyone Needs To Own

Take beer pong to the next level. 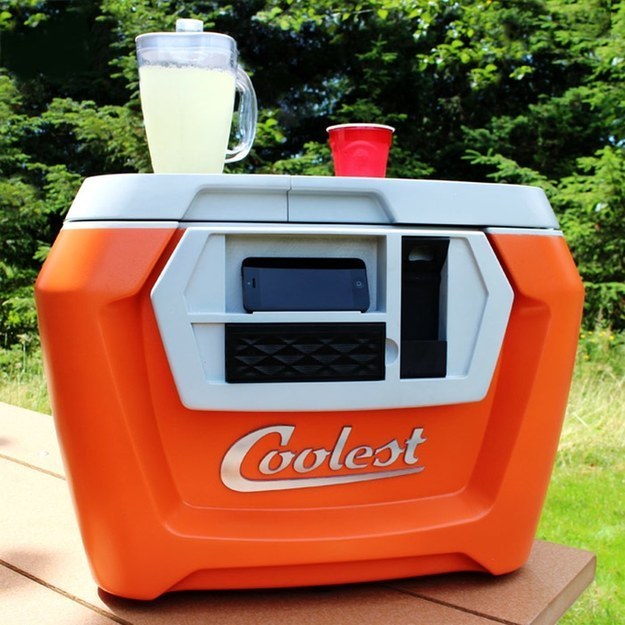 The world collectively freaked out when the Coolest cooler hit Kickstarter last year. Backers pledged over $13 million to the party-in-a-box. Many supporters STILL haven’t received their ultimate beach cooler, but it’ll be worth the wait.

Current pricing: $485
Expected ship date: September 2015 for a limited number of orders, early 2016 for the remainder 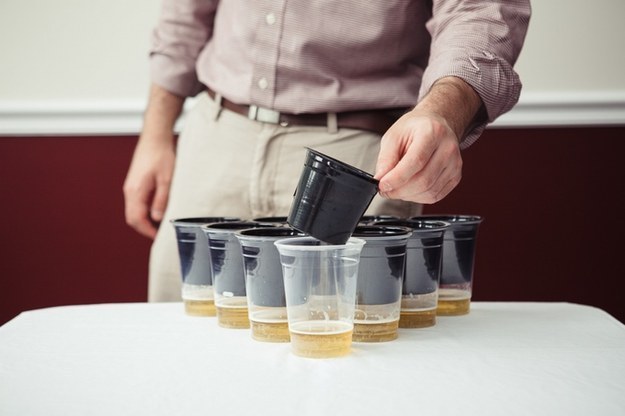 Can you even imagine?? Drinking beer pong beer without hair and grime? SlipCup provides a physical barrier between the ball and your beer, so you can gulp down your losses without being grossed out. They’re also weighted to keep beer off your floor and in your cup. 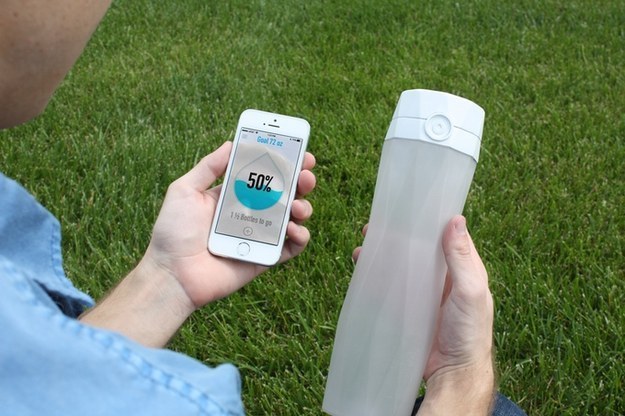 Life is busy and sometimes staying hydrated is *not* priority number one. HidrateMe is a water bottle with sensors that detect your water intake. If you haven’t had a sip in a while, the bottle will glow. HidrateMe is smart, but its battery only needs replacing once a year. No need to recharge it.

HidrateMe syncs with your phone via Bluetooth, and shows you how much more water you still need to drink (or if you’ve had enough), depending on your height, weight, age, and activity level. The app also uses your location to gauge the temperature, humidity, and elevation and adjusts water needs based on that information.

If you’ve ever accidentally yanked on your phone cable and watched it crash to the floor, this is what you need. Znaps is a magnetic charging adapter for iPhone and Android that works like your MacBook’s MagSafe adapters. You can plug an adapter into your Znaps in any direction. 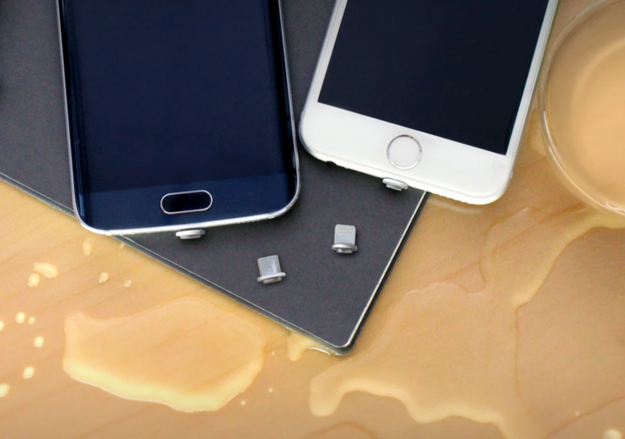 All charging cables suck – the connectors fray, and the cords break for no reason. This accessory will protect the cable charger head and prevent water damage at the charging port. 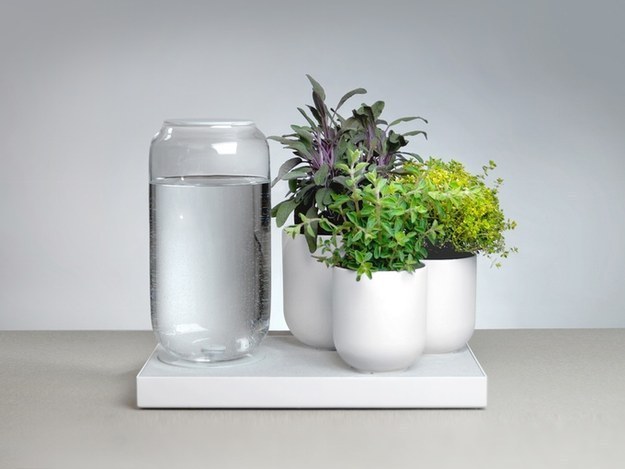 Tableau is *the* gardening solution for anyone cursed with a brown thumb. Every month, once a month, all you have to do is fill its reservoir with water. The tray does the rest.

It provides plants with a “wet-dry cycle.” Once the roots have used all of the water in the base, Tableau makes sure the soil stays dry for a few days before replenishing the water supply. This cycle makes for healthier plants. Basically, it WILL NOT FAIL. 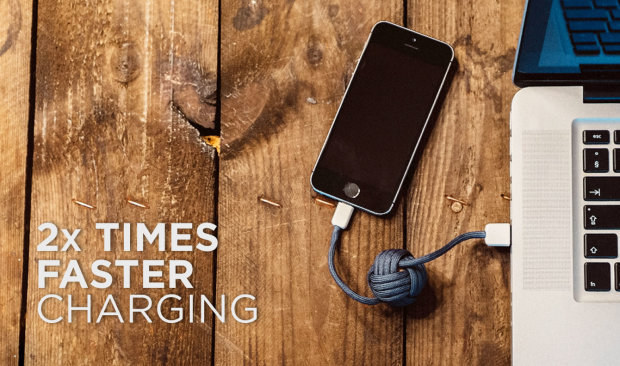 Not only does the pocket-sized Bold Knot provide three hours of extra battery – but it also doubles as a cable that charges two times faster than normal cords. Stick it on a keychain and *never* lose power.

7. The Gobag, a small duffel for long trips

With this carry on-sized duffel, you can fit more stuff into a smaller space. Its main feature is the “Max Pack Bag,” a vacuum-able compression sack built right into the Gobag. There’s also a clear bag for liquids that quickly detaches from the top via velcro so you can speed through security. A secret document pocket on the side keeps your passport close by.

But ultimately, the bag is designed for adventure and made with rugged, waterproof materials and carbon steel hooks. 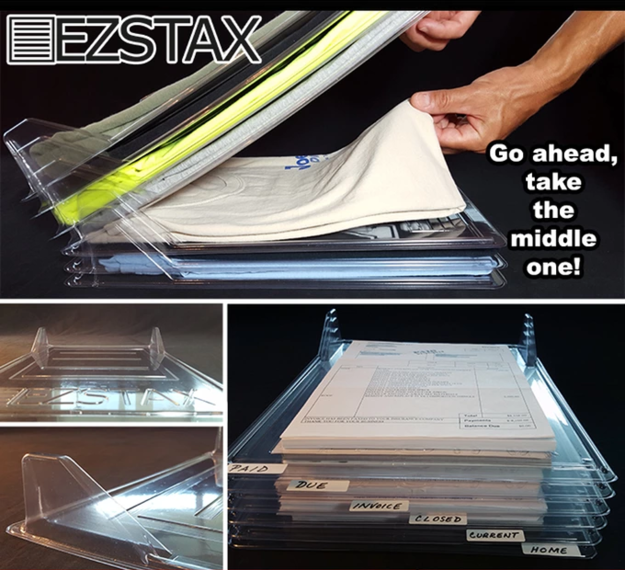 T-shirt stackers, LISTEN UP. These interlocking plastic organizers let you pull from the middle of a stack without ruining the rest of your shirts. Ezstax stack shirts, documents, and accessories neatly in drawers and on shelves, so you can actually live and pick the second-to-last-shirt without making a damn mess. 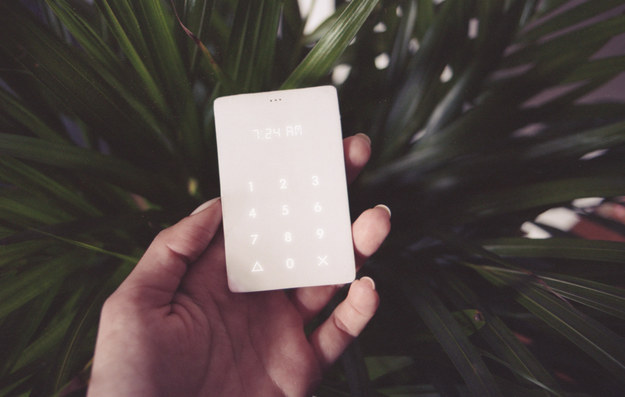 The Light Phone / Via kickstarter.com

Welcome to notification-free bliss. If you’ve ever wanted to go on a digital-free walk, you now can with the credit card-sized Light Phone. It uses call forwarding to work with your current phone number. The Light Phone has a SIM card slot, speaker, mic, and a subtle LED display so you can make and take calls – and that’s it. 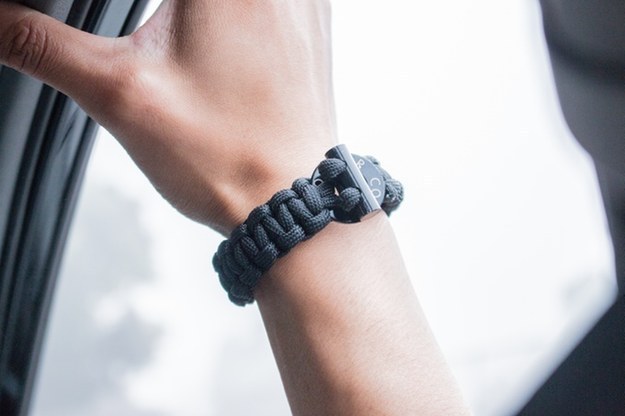 It starts FIRE. This bracelet could literally save your life. Its made of super strong, military-grade paracord, and has flint and steel woven into its end, so you can spark a flame any time, anywhere. You’ll definitely want this on your next camping trip.

11. The game-changing Next Keyboard app 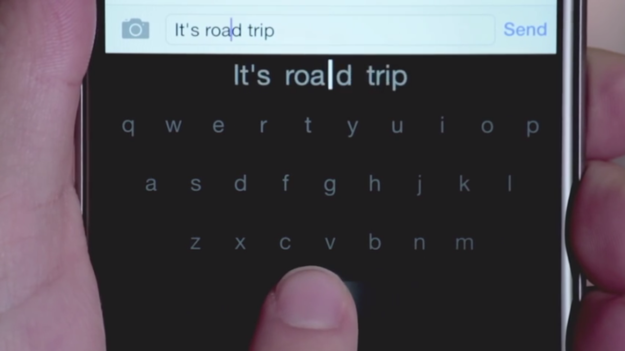 This app became the most funded app on Kickstarter, and that’s because it’s pure genius. It’s a keyboard that you can use with any app (like the emoji keyboard). One of Next’s killer features is “Quick Cursor Swipe” which turns the spacebar into a smooth cursor so you can quickly edit text.

Other features-we-can’t-believe-we’ve-lived-without are emoji suggestions (when you type “poop,” a poop emoji appears in the auto-correct bar), swipe to type, and tap-and-hold to switch between numbers and letters. 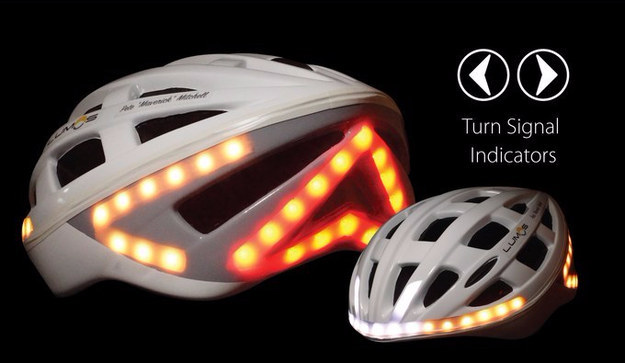 Weaving between cars and trucks while city riding is very, very risky. With the Lumos helmet, you’ll feel good that you made yourself safer and more visible.

The rechargeable helmet has an accelerometer that knows when you’re coming to a stop, and will shine a super bright brake light once you do. It also comes with a handlebar remote that enables turn signal lights on the rear so vehicles know exactly where you’re headed. 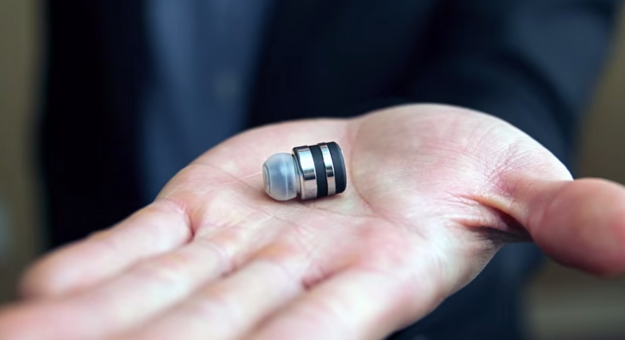 Bluetooth earbuds is an invention that SHOULD EXIST ALREADY but doesn’t. There are a few in the works, including the Earin and Dash, but in terms of weight, battery time, and price, the Dot promises to go above and beyond the rest.

It’s wireless, which prevents one of the most vexing frustrations of the modern era:tangled earbud cables. Another one of the Dot’s unique features is that it has a built-in mic, so you can take calls. It lasts for 9 hours of talk time and 6 hours for music playback. The buds can connect up to eight different Apple, Android, and Windows devices.

14. BauBax, the best travel jacket ever 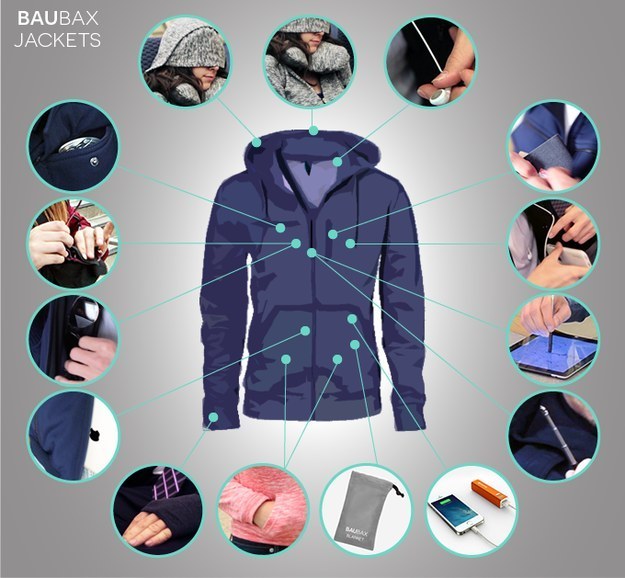 It comes in four different styles: sweatshirt, windbreaker, bomber, and blazer. There is no situation where the BauBax is inappropriate.

Heavy, bulky carseats are so last year. The Mifold can easily fit in a backpack, making it the ideal travel companion for carpooling and car rentals. Instead of lifting a child up, the Mifold holds the seatbelt down in such a way that the belt stays off of the child’s face and neck and off of their stomach area. 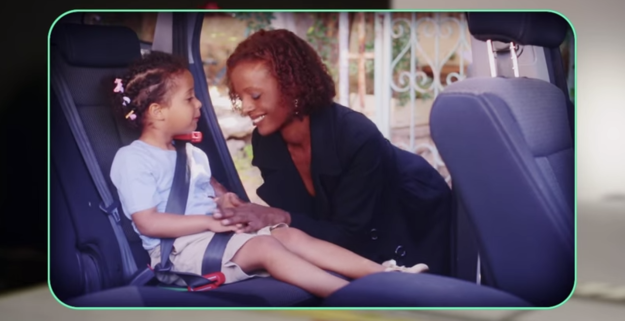 It’s so small that you could easily fit three Mifolds side-by-side, which is impossible for many boosters. 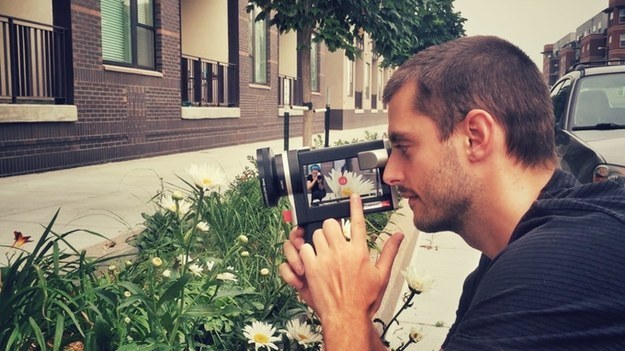 Channel your inner Wes Anderson by turning an iPhone 6 into a classic film camera. Simply pop the device into the case, and start shooting Super 8-esque photos and videos with a wide angle, fisheye or telephoto lens.

Like an old-school video camera, the case has an ergonomic handle for producing stable shots and a simple red record button. 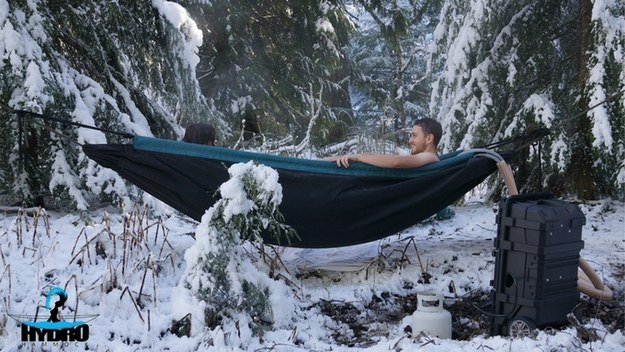 Now *this* is innovation. With the Hydro Hammock, you can set up a hot tub or cool bath in any location that’s fit for a hammock. A built-in hose draws from a water source (like a lake or stream) or recirculates water within the Hammock. 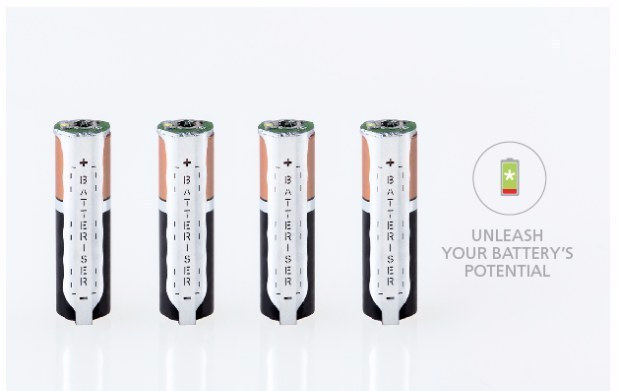 It’s kind of amazing how many gadgets still rely on batteries (your remote, mouse and keyboard to name a few). If you’re constantly going through double AAs and triple AAAs, consider getting a bunch of rechargeable batteries or making them last eight times as long with these Batteriser sleeves.

It slips over your battery and won’t affect how the battery fits in the compartment. The sleeve uses special circuitry to access a battery’s untapped energy to make it last longer.

The air you breathe is dirty. Pollutants and toxins from carpets, cleaners, and more fill the air, contributing to ailments like allergies and headaches. Airy is a smart pot that allows roots to breath so that the plants can convert pollutants into nutrients. The secret is in the ventilation. Apparently, it’s how NASA cleans the air in the space stations.

Bonus extra: because the pot can hold 2.4 liters of water, you only need to water the plant every four to six weeks. 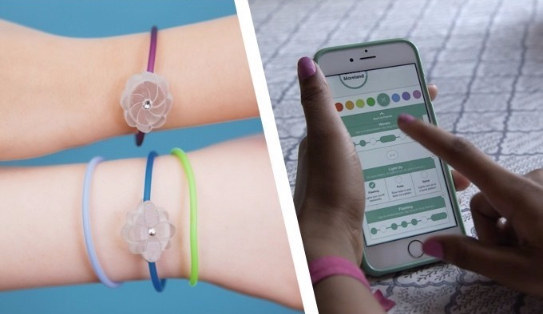 Men still outnumber women in STEM (science, tech, engineering, and math) fields. This bracelet aims to reverse that trend by sparking girls’ love for science and technology early on.

The Jewelbot pairs to phones via Bluetooth, and an app allows girls to program their bracelet and modify its behavior. When they get a text from a parent, they can have the bracelet flash a certain color and when they get a new like on Instagram, they can have it flash another. The bracelet is a great way to get someone’s feet wet with coding concepts. 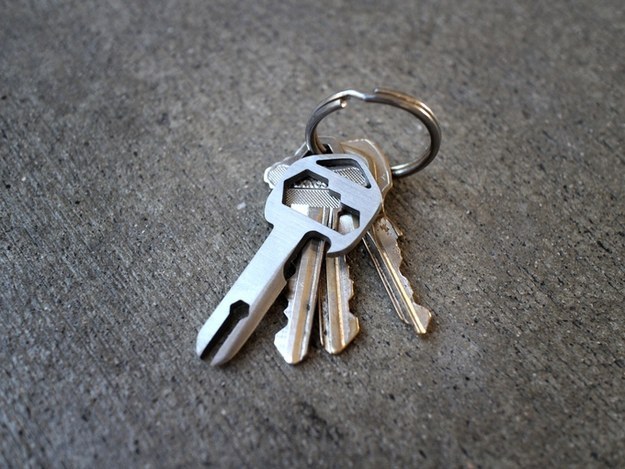 Forget the amps and monitors and cables … this turntable has full -range speakers and an internal amp built-in, with a headphone port and the option to use your own audio setup. It’s a conversation starter that’s sure to peak the curiosity of all who enter your listening space. 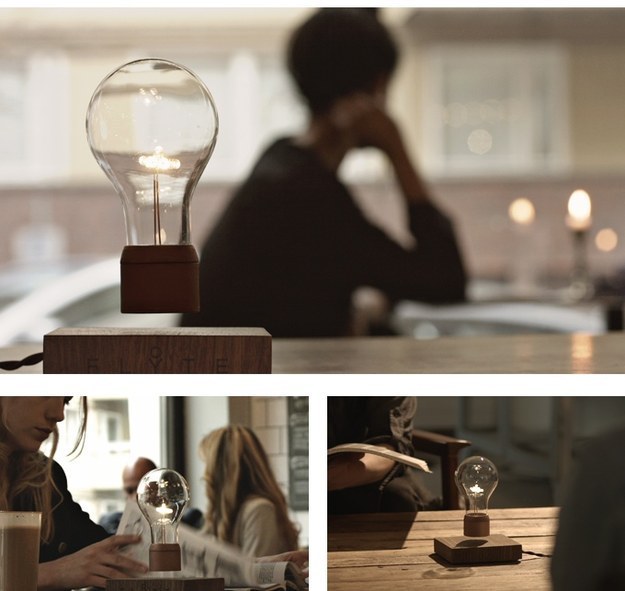 Because why not! Flyte hovers in the air via magnetic levitation and is powered by induction. The low-energy LED light has a wireless power receiver that transfers energy between the base to the bulb. To turn it off, all you need to do is touch it.

It’s 1 part science experiment, 2 parts curiosity-inducing art project. With the right third-party accessories, you also can put your phone on the base and charge it.