by Architect K.A.
Reading Time: 4 mins read
0 0
A A
2
SHARES
184
VIEWS
Share on FacebookShare on TwitterPin to Pinterest

An end to puddles? Bizarre ‘thirsty’ concrete sucks up hundreds of gallons of water in less than a minute!

Concrete is rarely the most fascinating of subjects, but a strange ‘thirsty’ version of the material has turned it into something rather compelling.

Topmix Permeable concrete is designed to be a super-absorbent surface covering that allows water to seep through it rather than sitting on top in an attempt to combat flooding.

A video of the material being tested in a car park shows the concrete ‘drinking’ 880 gallons (4,000 litres) of water in around a minute, with most of it disappearing almost as soon as it hits the ground.

Topmix Permeable concrete is able to absorb up to 880 gallons of water in around a minute. Watching the water pour out of the lorry and vanishing into the ground is strangely mesmerising (credit: Tarmac)

While helping to prevent surface water flooding during storms, the concrete could also help to make roads or cycle paths safer by preventing puddles that could pose a risk, according to Tarmac, which has developed the concrete.

It works by having a permeable layer of concrete on top that allows water to drain through a matrix of relatively large pebbles into a loose base of rubble beneath.

rainage channels incorporated into the rubble can help to increase the amount of water it can cope with.

A statement by the company said it could not only help to tackle flash flooding in urban areas but may also help to reduce the heating of tarmac in hot weather.

They said: Permeable concrete allows surface water to freely drain through the wearing surface to the underlying ground with the ability to act as a reservoir during periods of high downfall.

‘During these periods this characteristic can aid in delaying the discharge of surface water into water courses or drainage systems reducing the risk of overwhelming systems and causing flash flooding.

The concept of permeable concrete has been around for nearly 60 years and it is often used under paving to help aid drainage, for example.

However, Tarmac claims advances in the way it can be compacted has now allowed it to be used as a top surface, capable of withstanding use by cars.

It claims the permeable concrete is ideal for large areas of concrete where water can be a problem, such as car parks or driveways.

Where Does the Water Go? 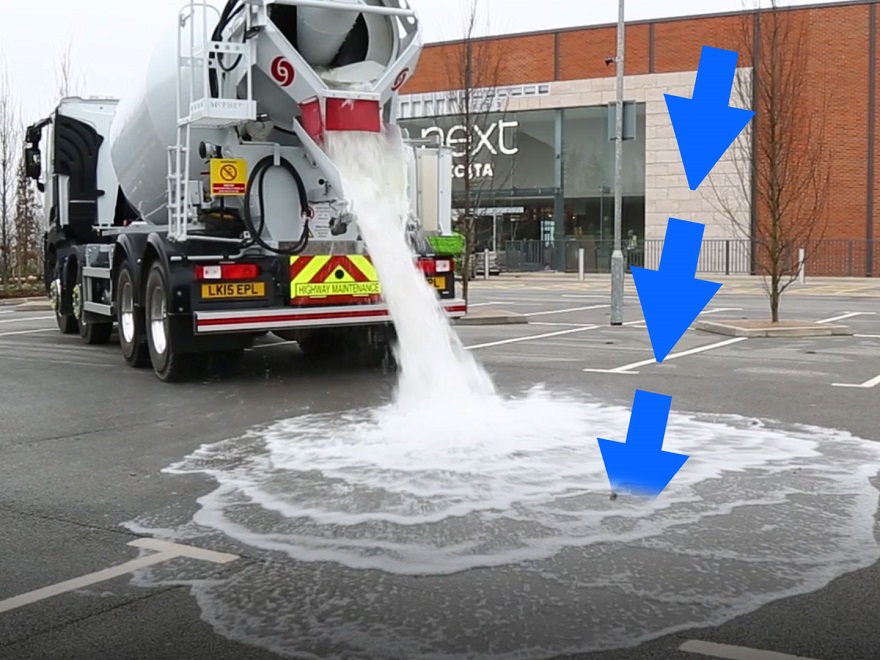 The absorbent concrete is said to be ideal for car parks (pictured) where standing water and puddles can be a problem and large areas of paved ground can increase the risk of flash flooding during storms.

The company says by adding drainage systems into the aggregate beneath the Topmix Permeable layer, it can increase the amount of water it is able to absorb. A graphic showing how the system works is shown above

The company also says the system could help prevent puddles on cycle paths and footpaths.

However, in areas that suffer extreme cold, the concrete is likely to be damaged as the water beneath freezes and causes the surface above to buckle and crack.

Tarmac said it had already installed the Topmix Permeable concrete in a car park in High Wycombe and on Worksop Golf Course.

The concrete uses a large pebble size (pictured) to allow water to filter down through it into a loose aggregate layer below, which can hold the water and allow it to gradually filter into the soil beneath