by Architect K.A.
Reading Time: 7 mins read
0 0
A A
1
SHARES
94
VIEWS
Share on FacebookShare on TwitterPin to Pinterest

The B2 Boutique Hotel + Spa has opened its doors in 2011 in one of the most remarkable industrial heritage sites to be found in Zurich, the former brewery Hürlimann. 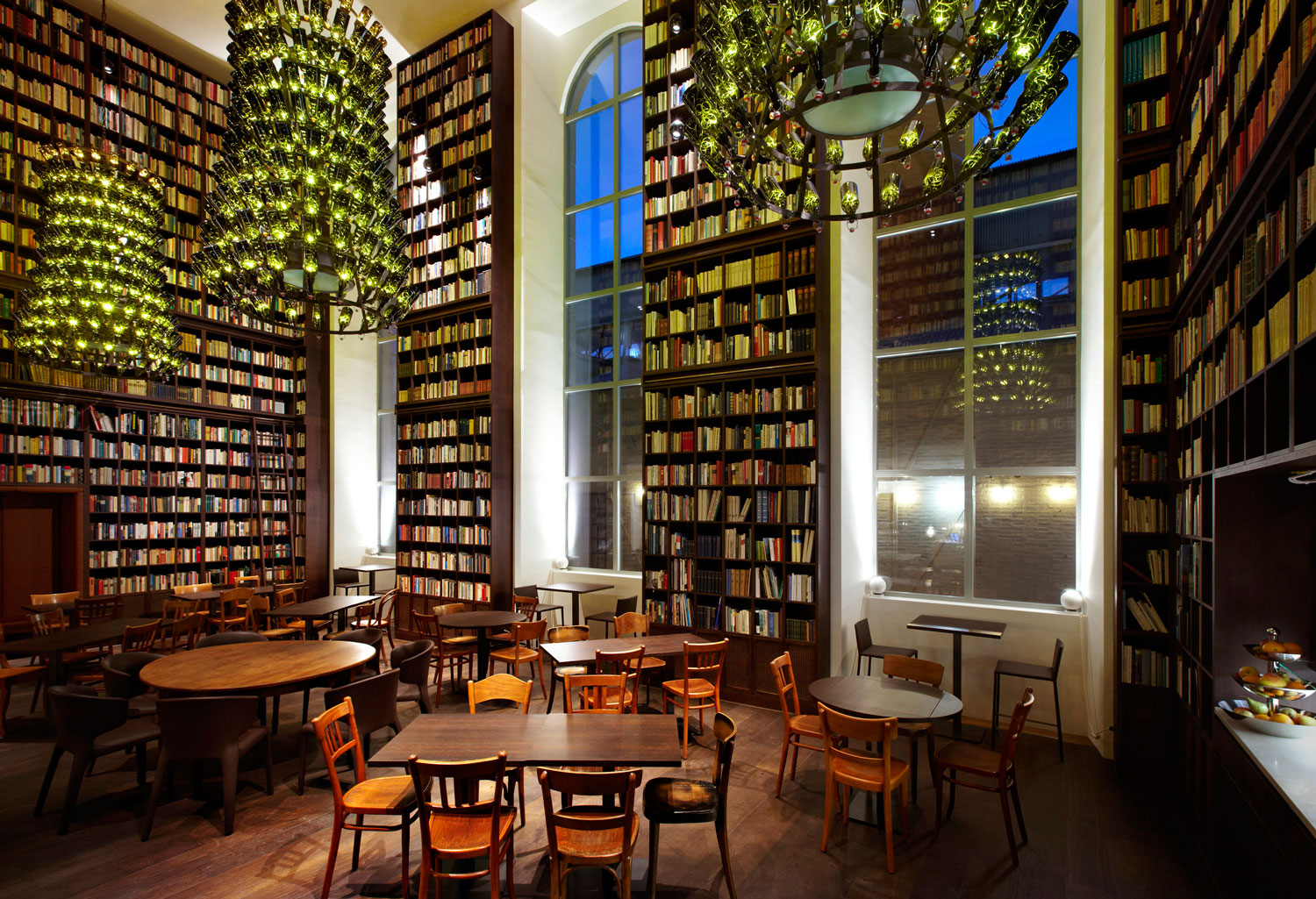 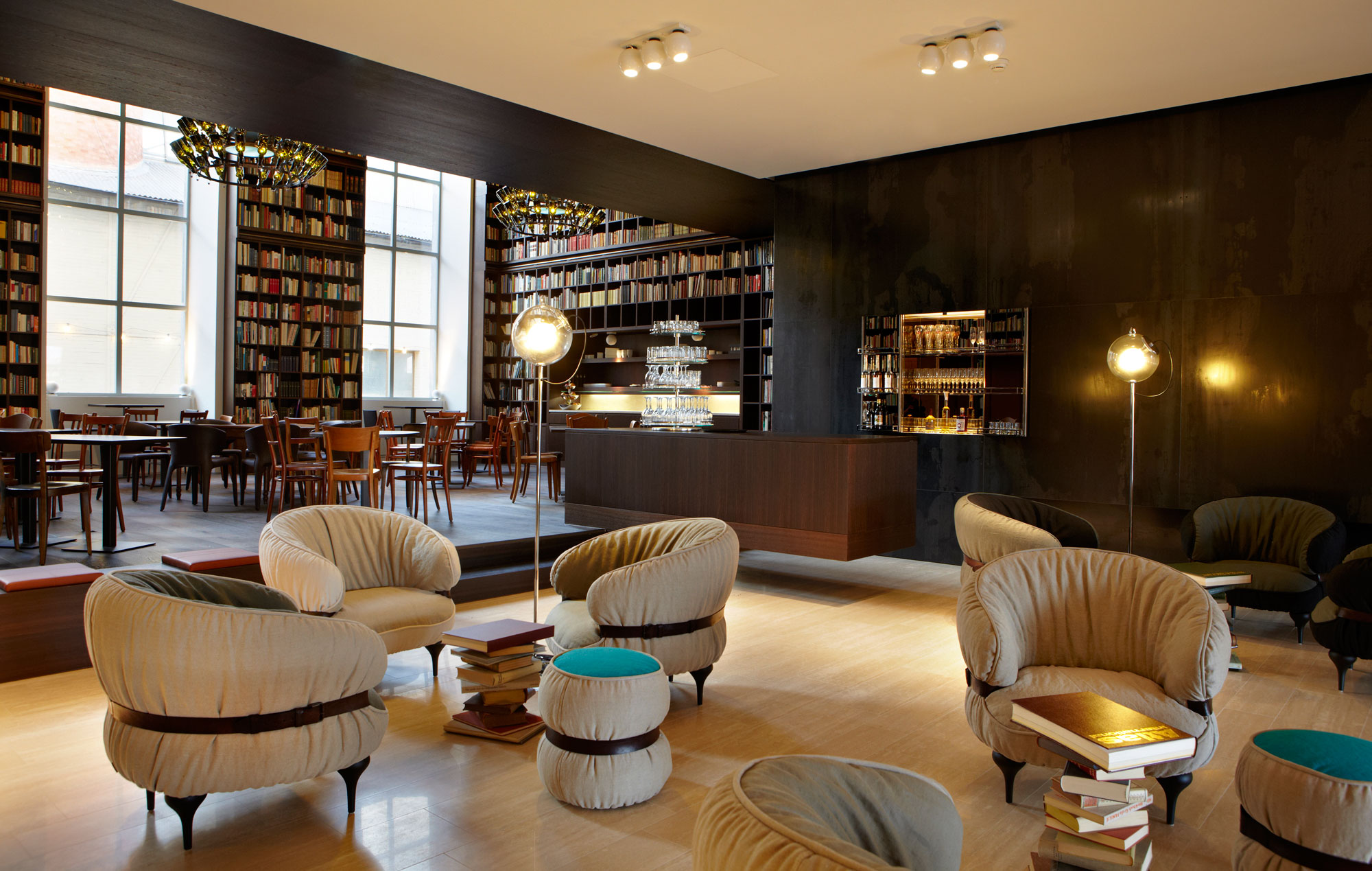 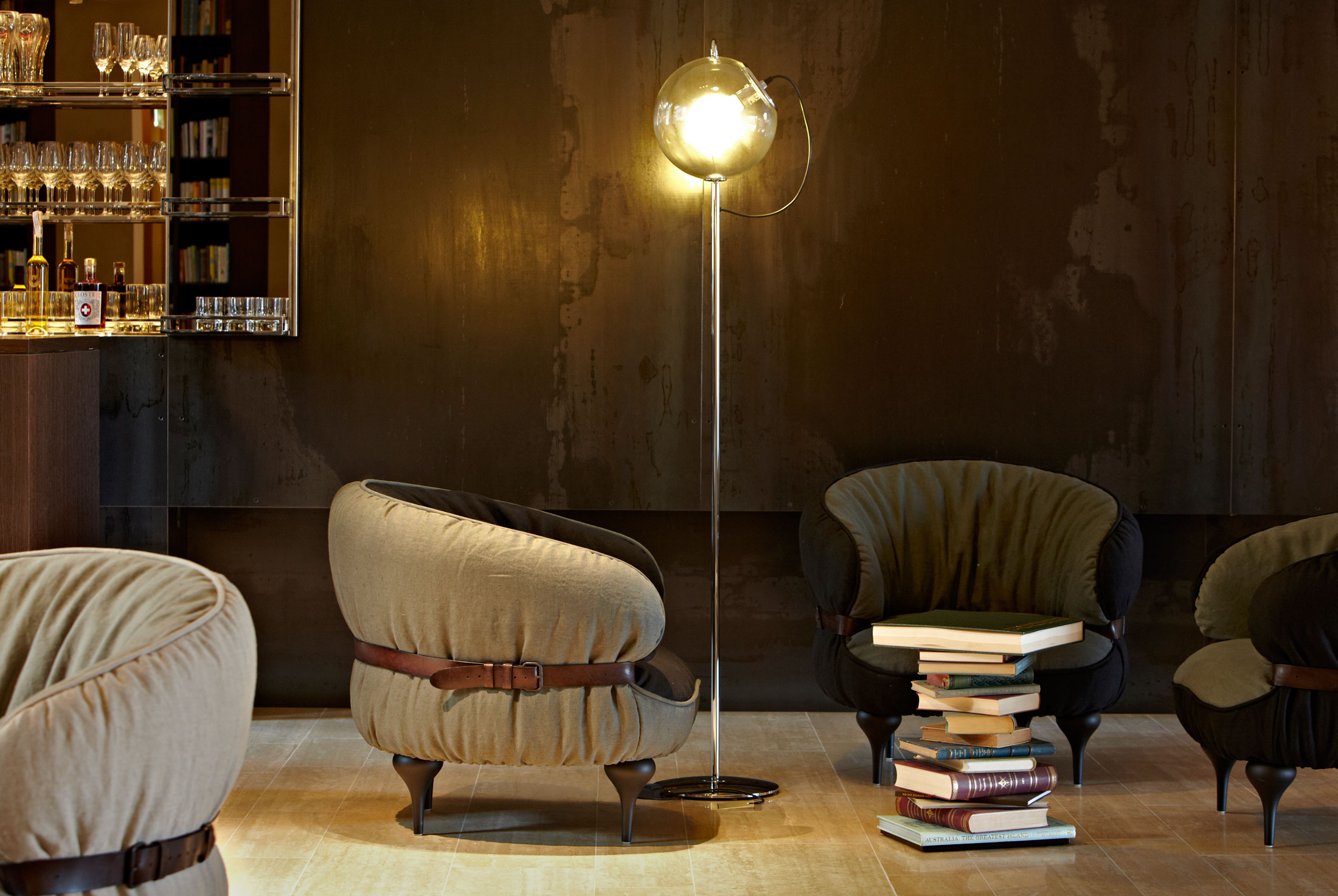 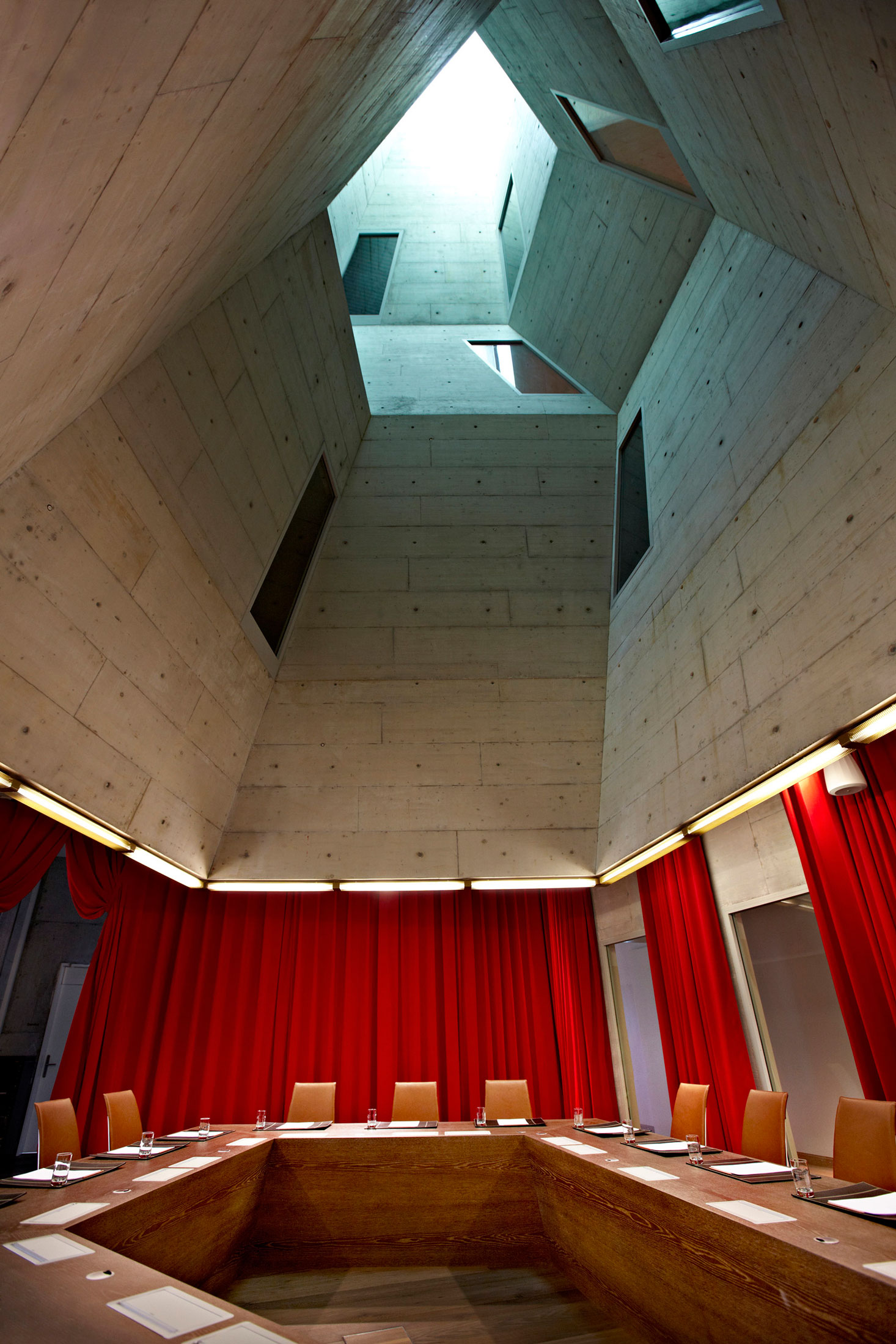 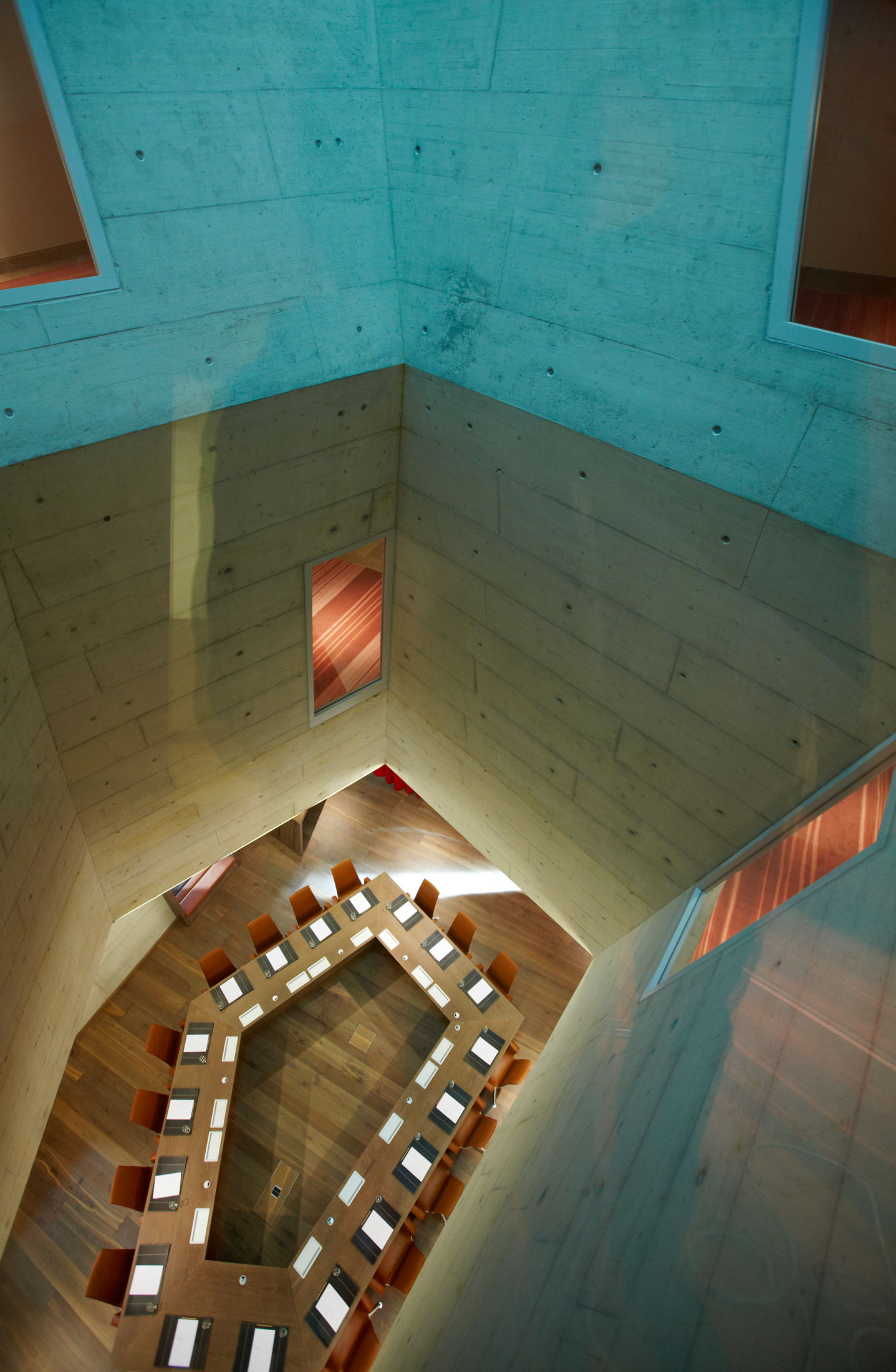 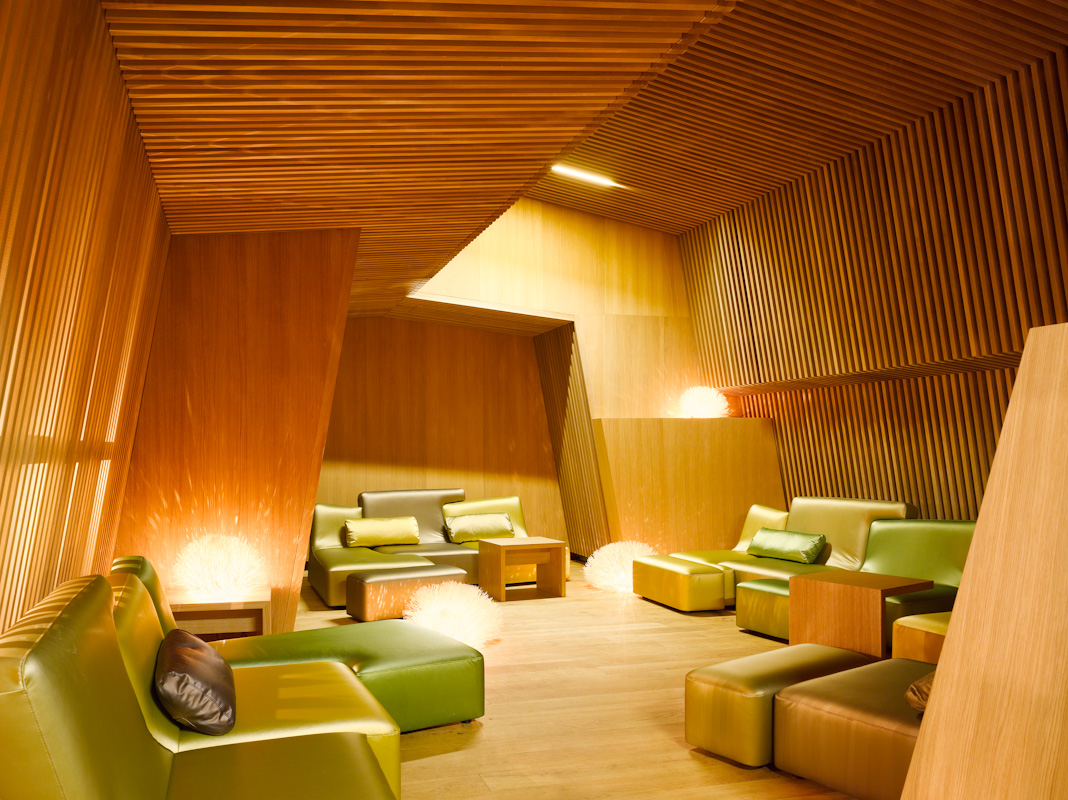 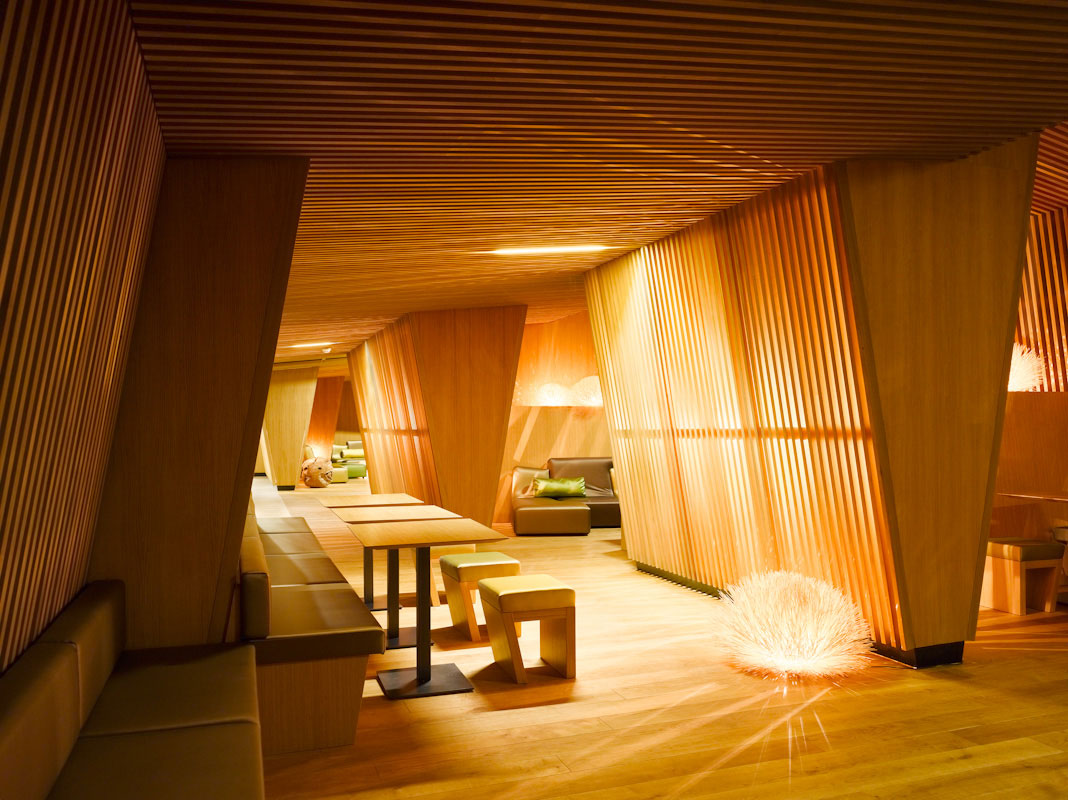 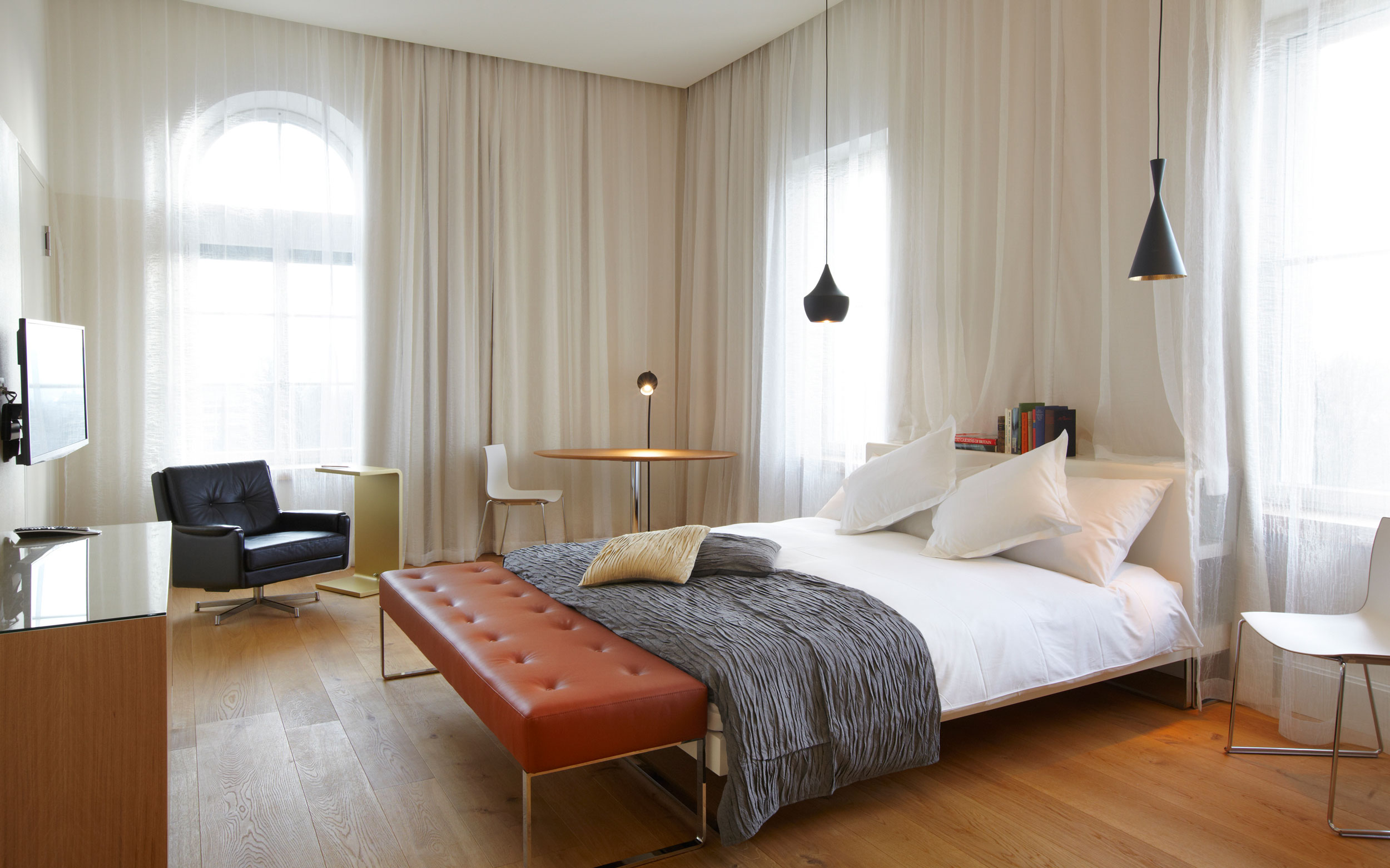 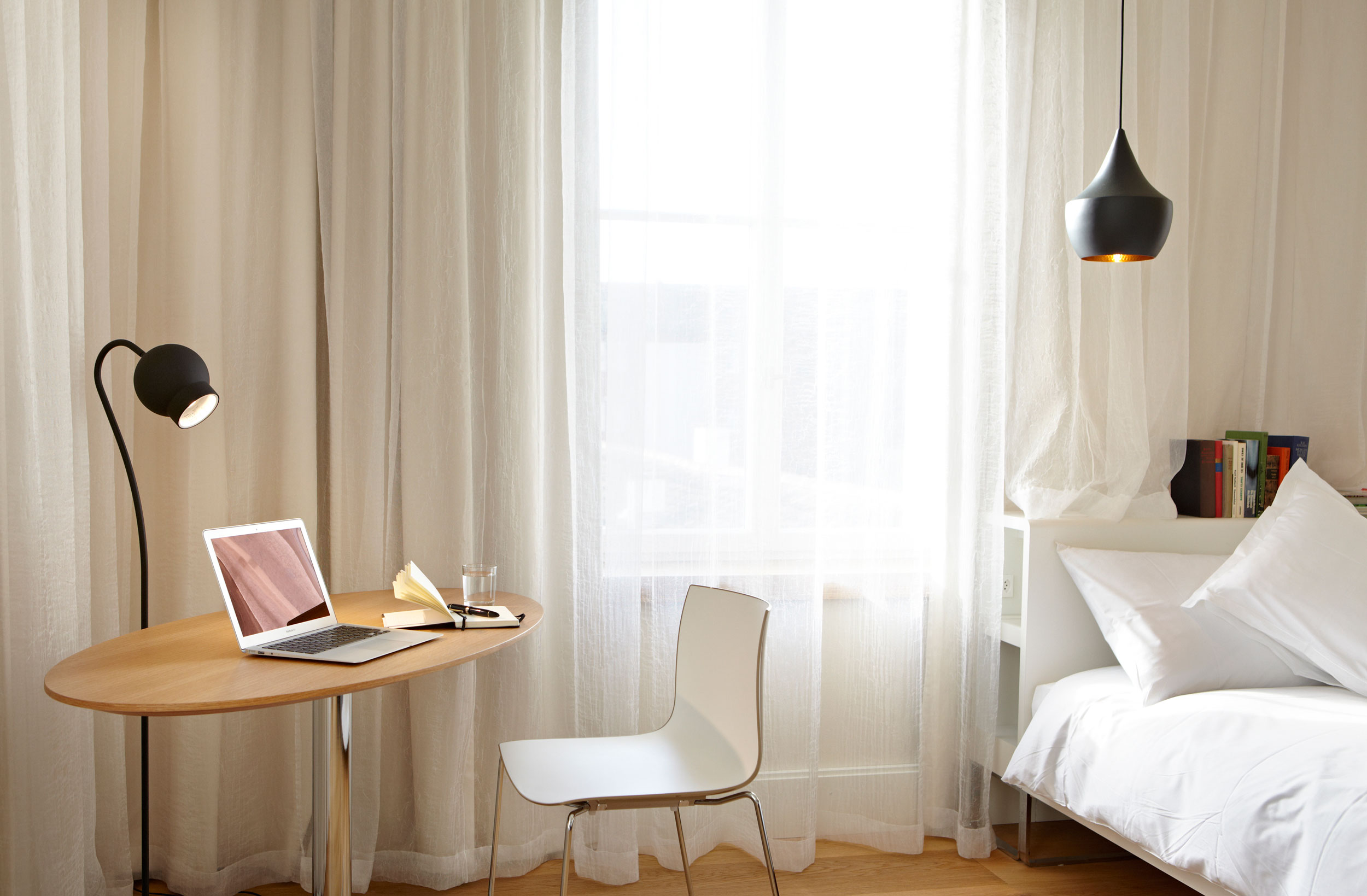 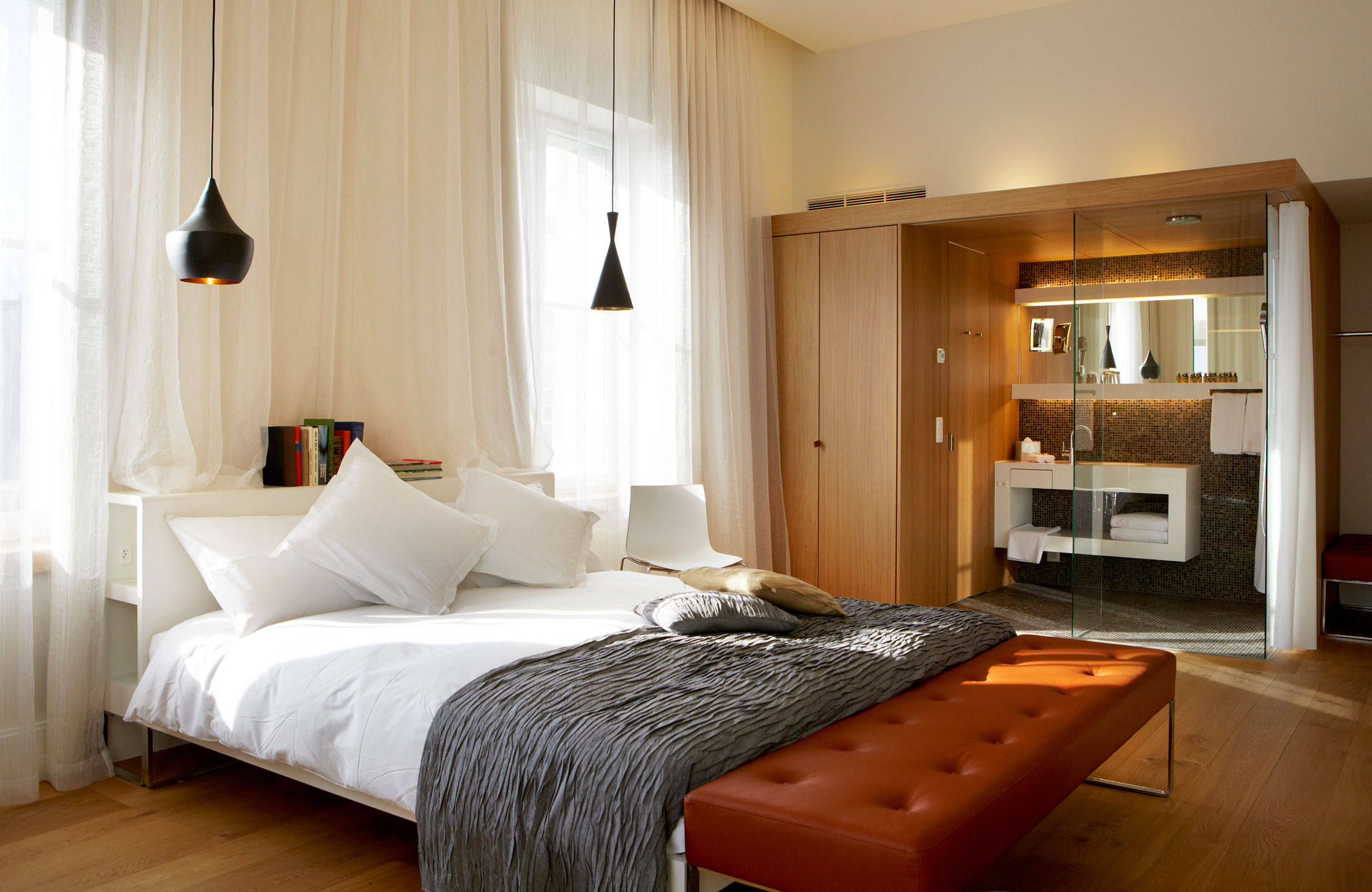 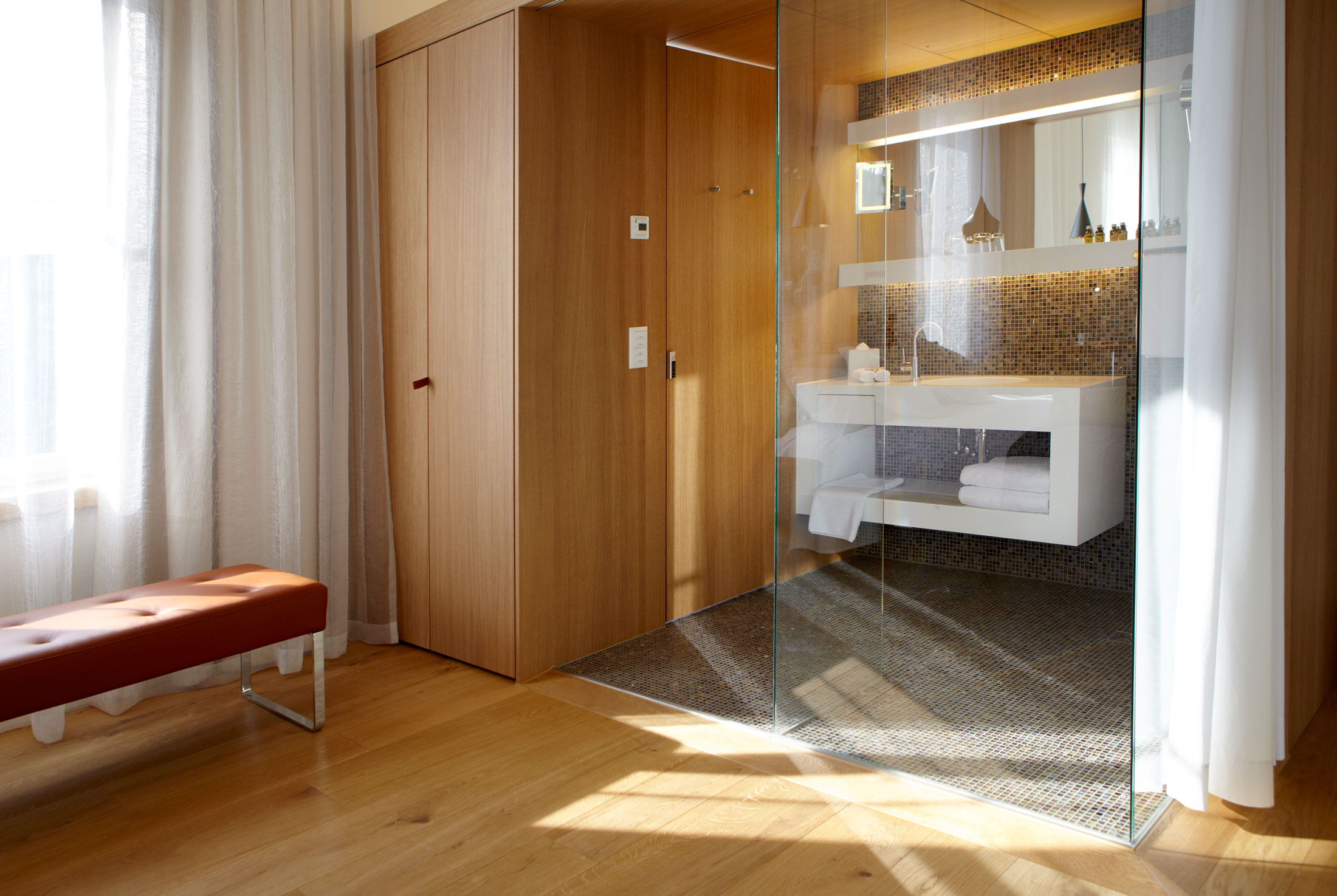 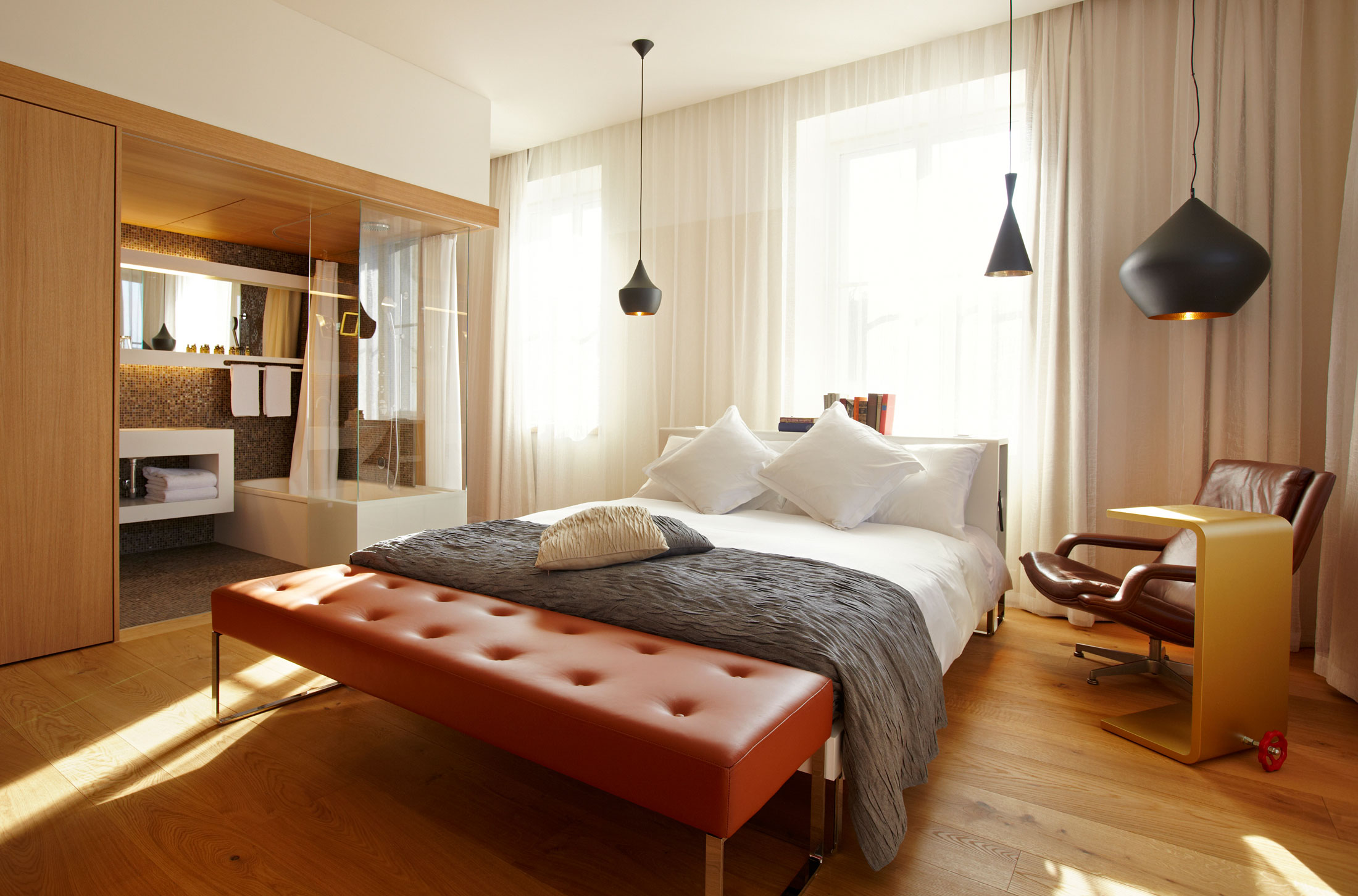 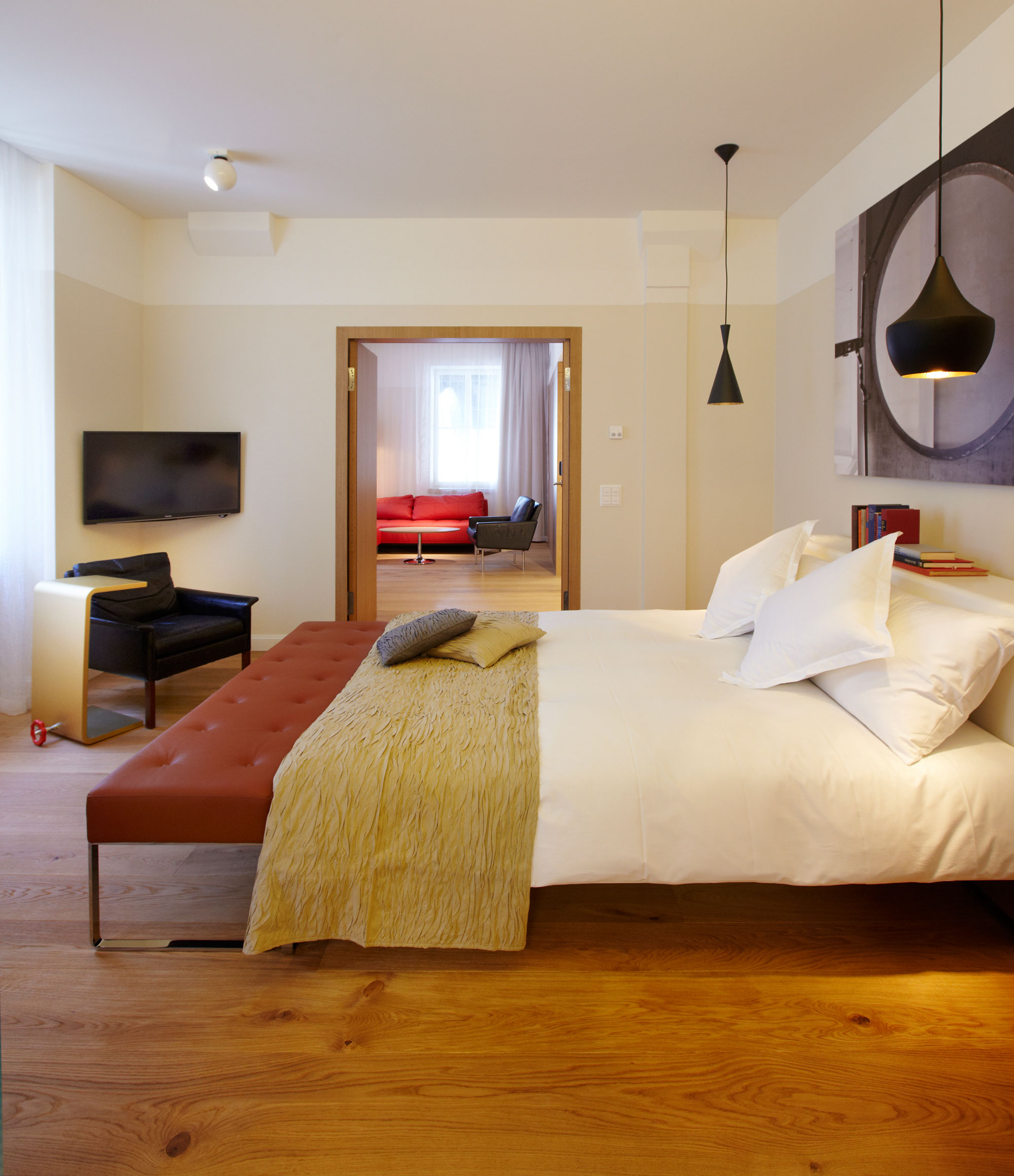 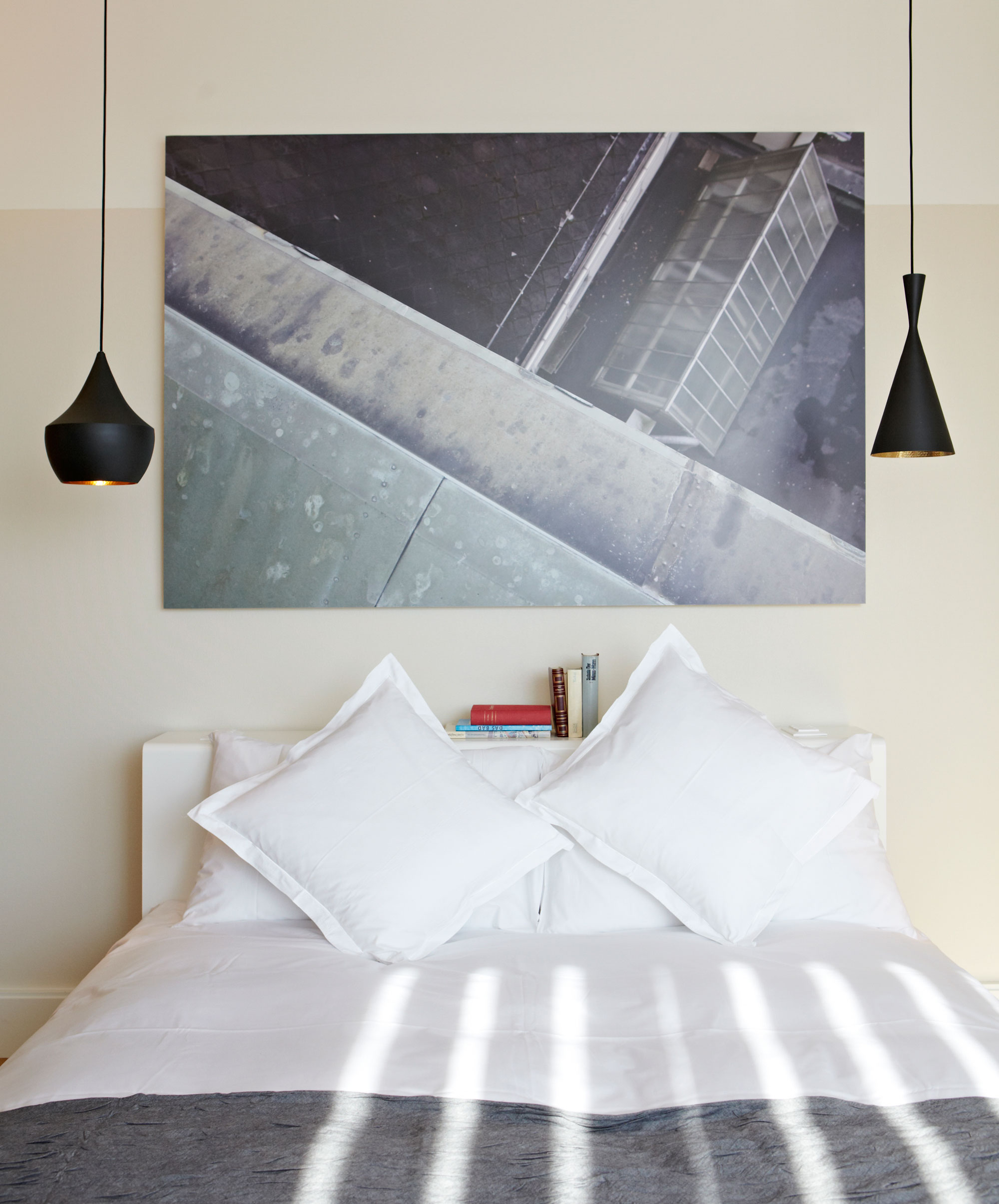 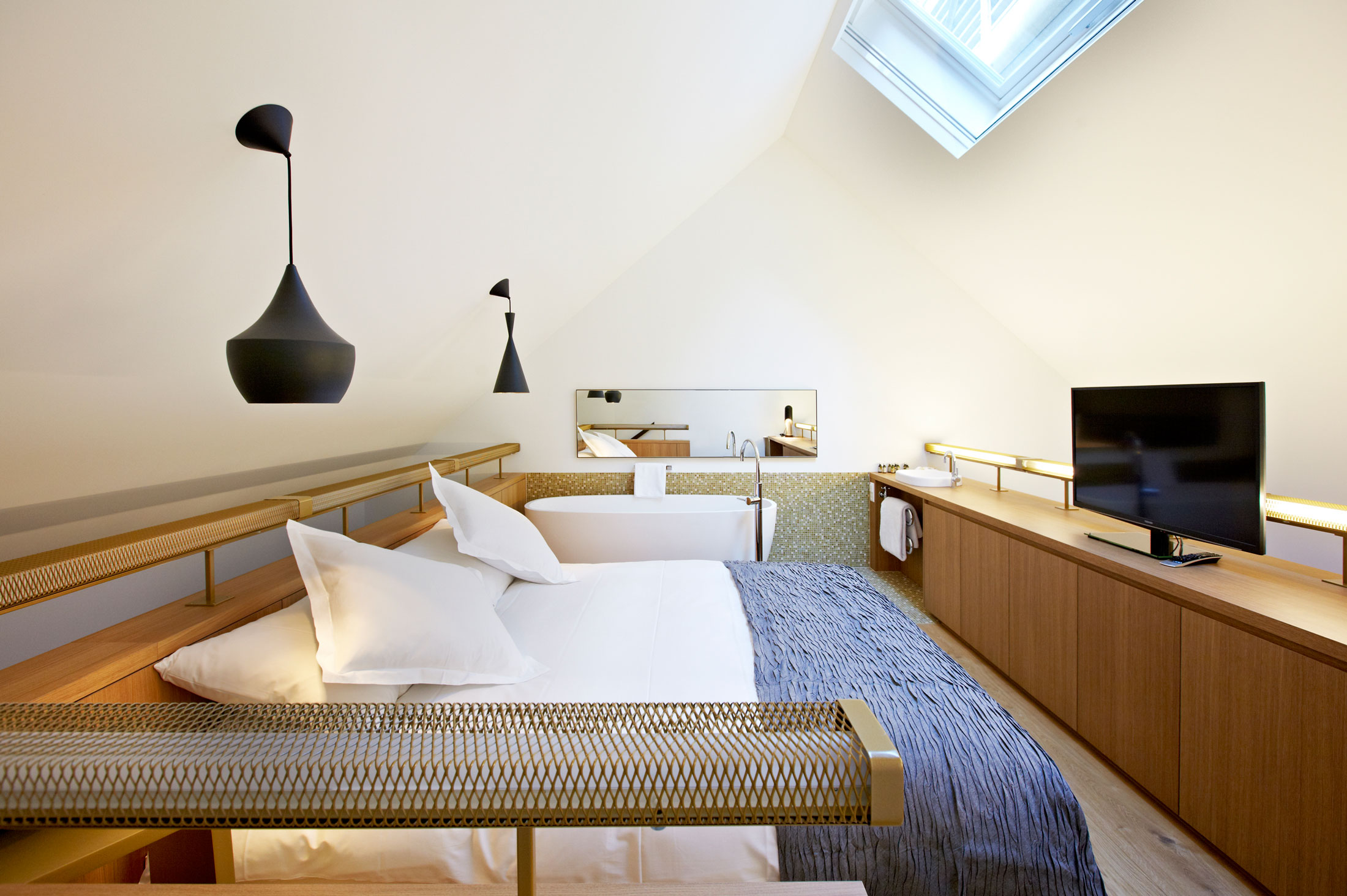 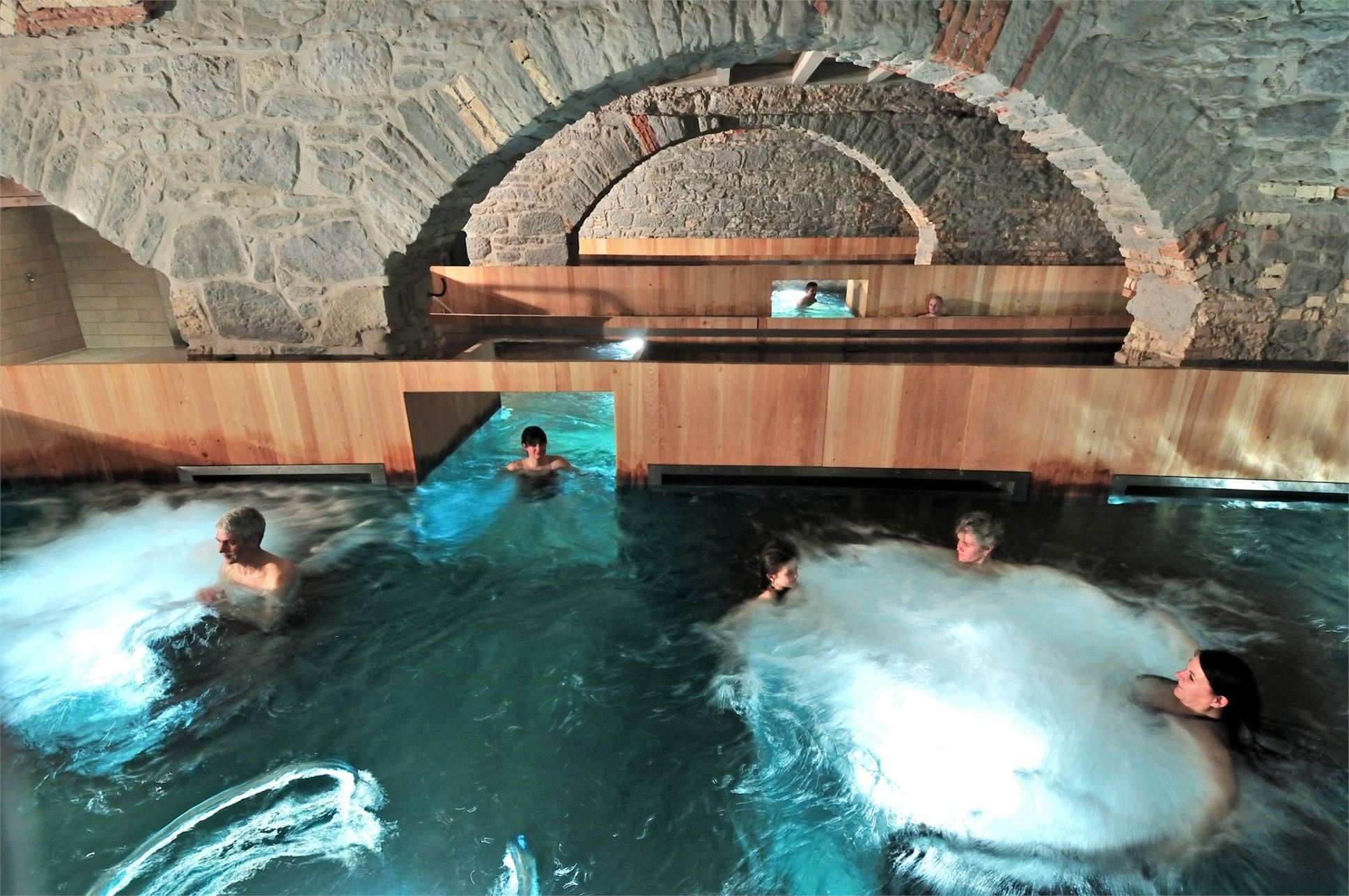 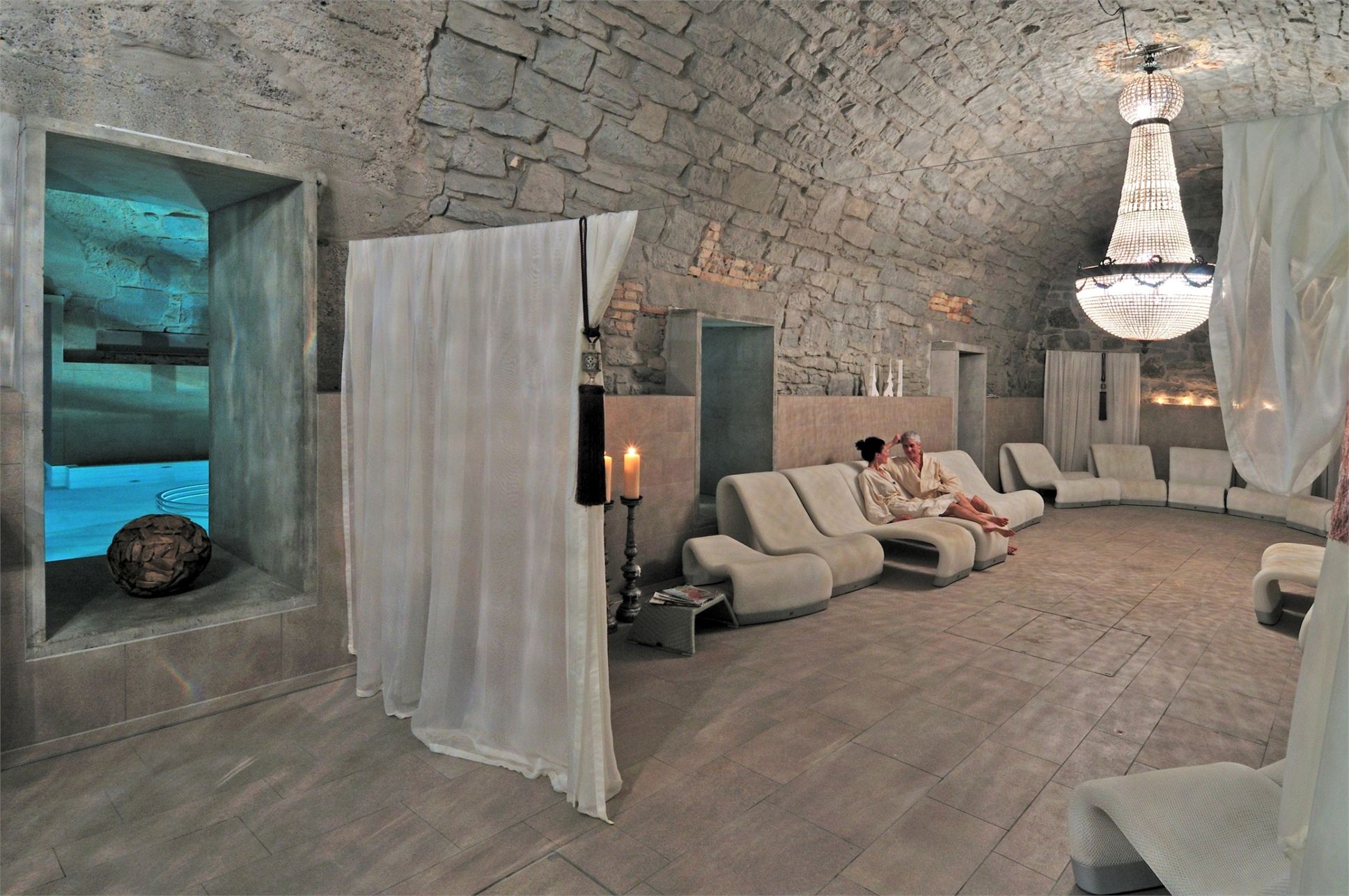 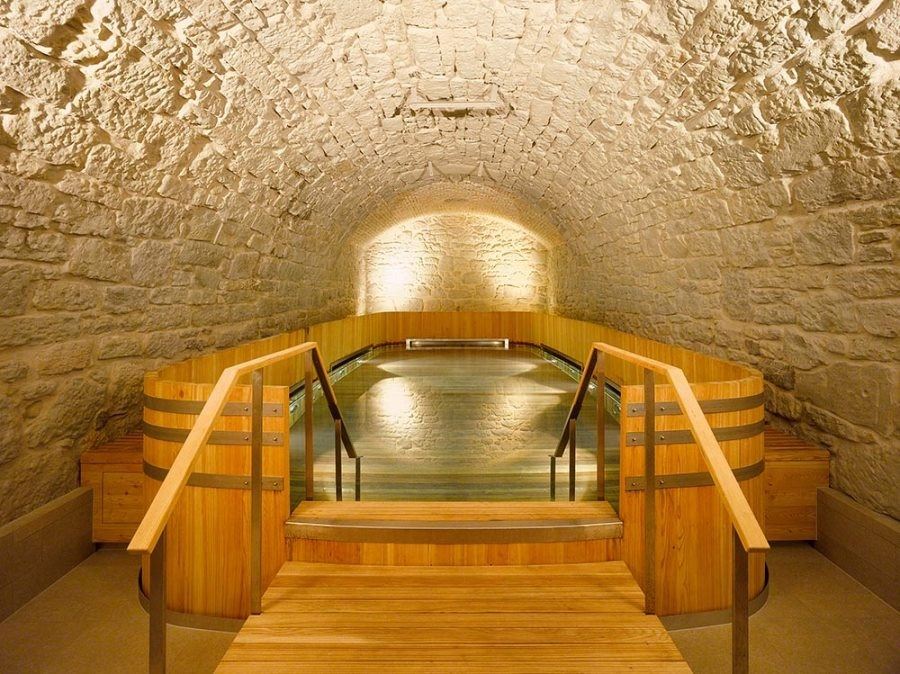 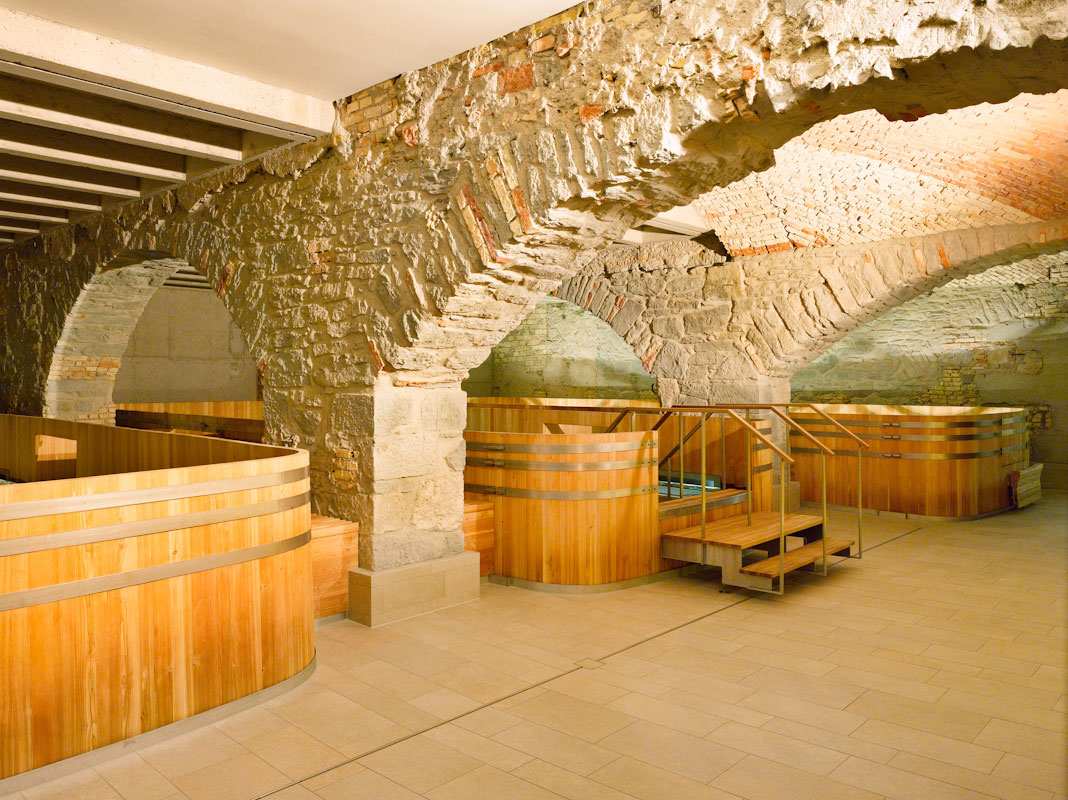 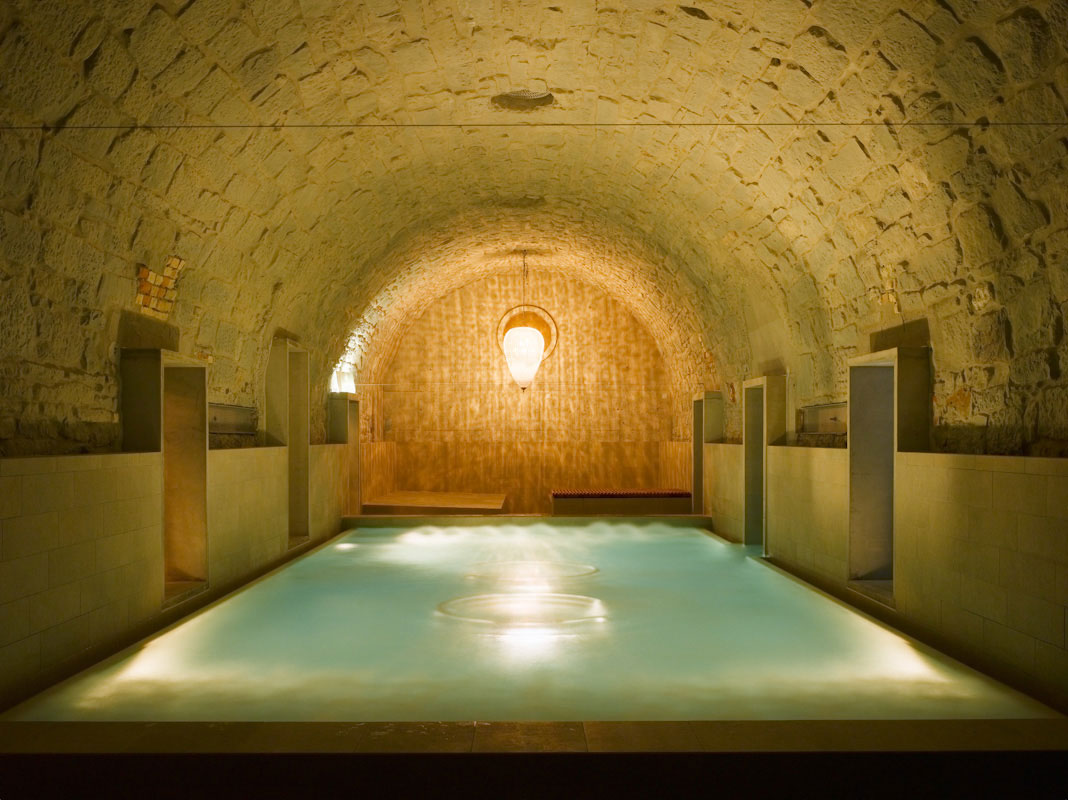 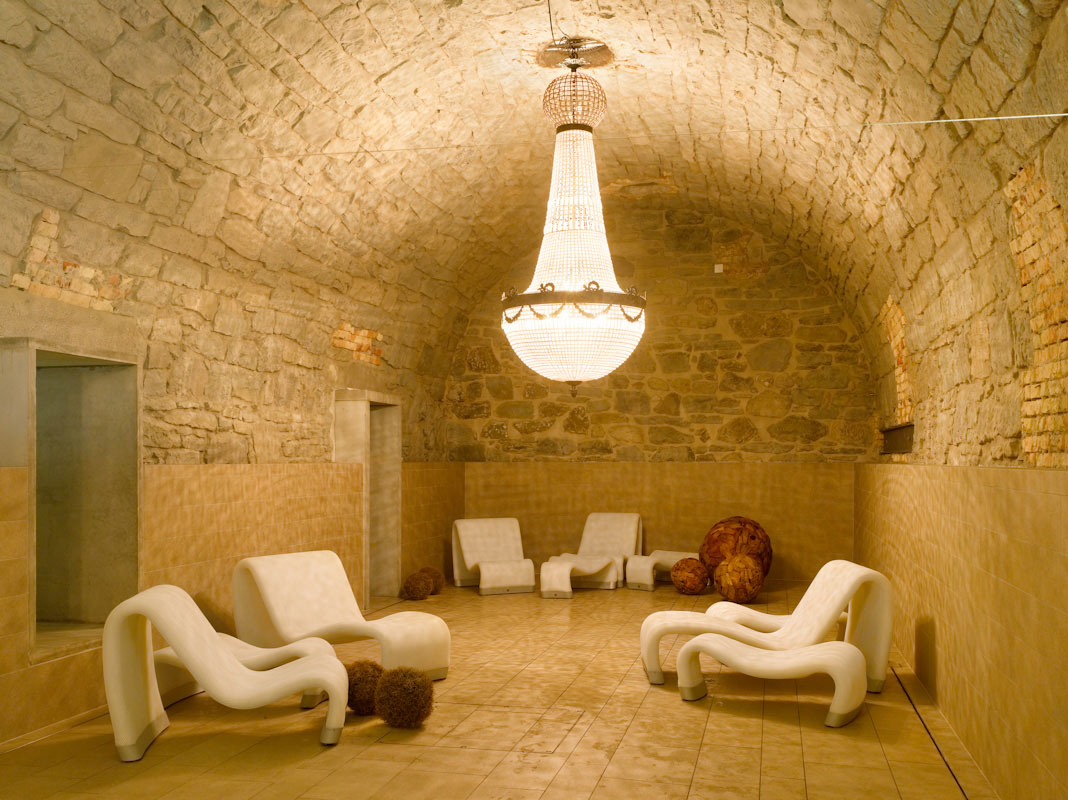 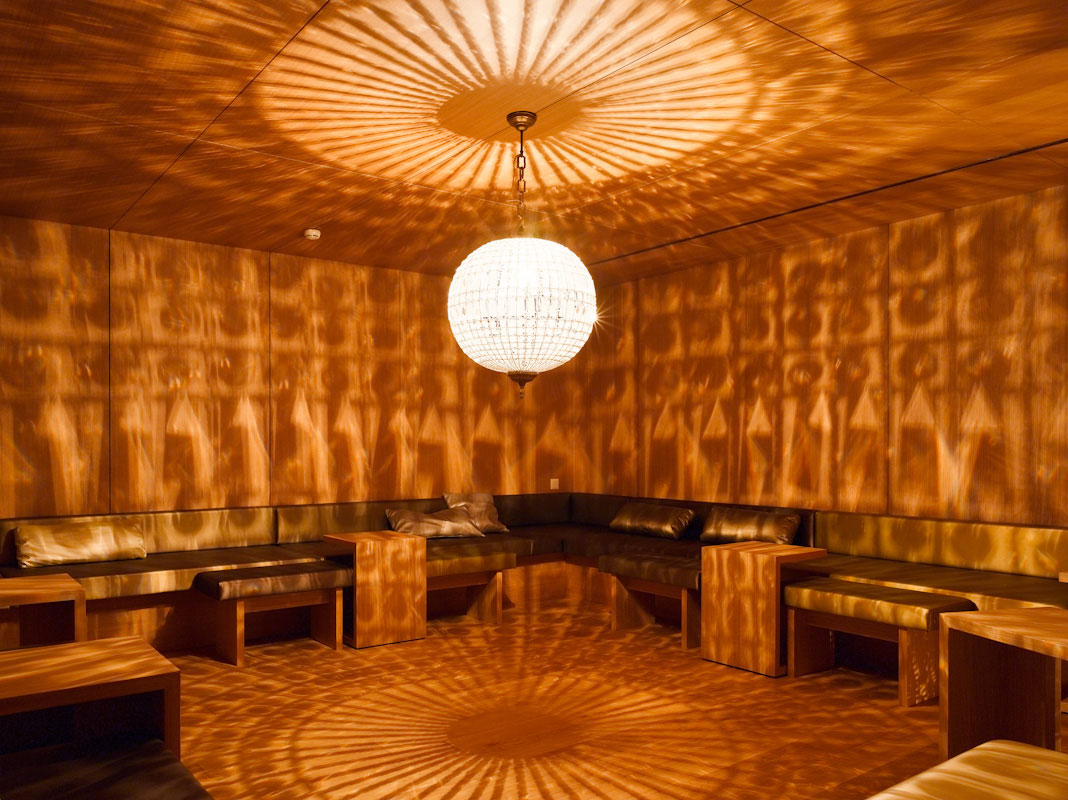 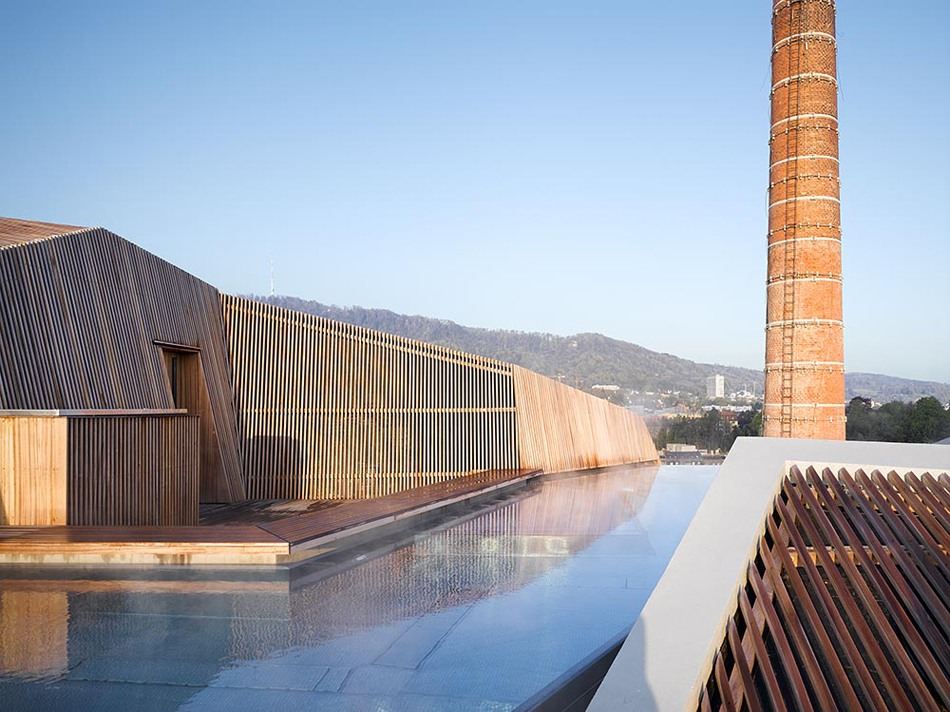 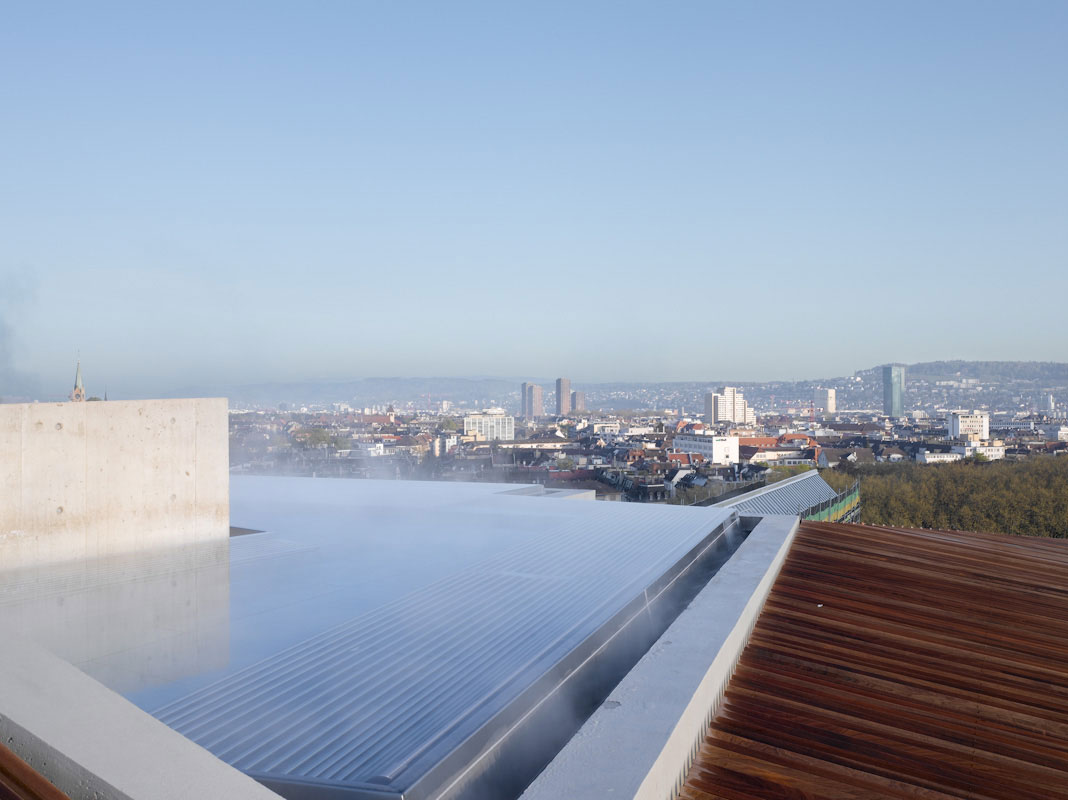 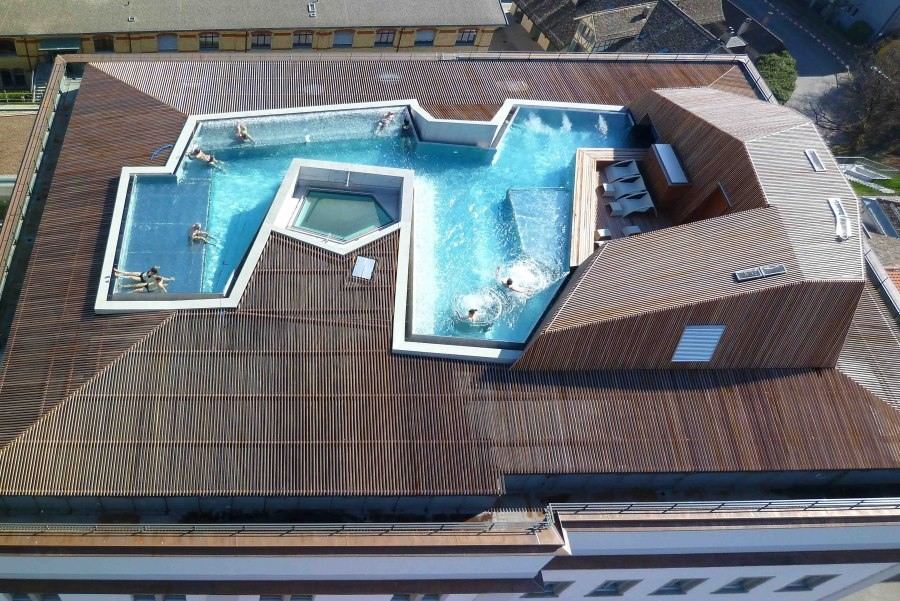 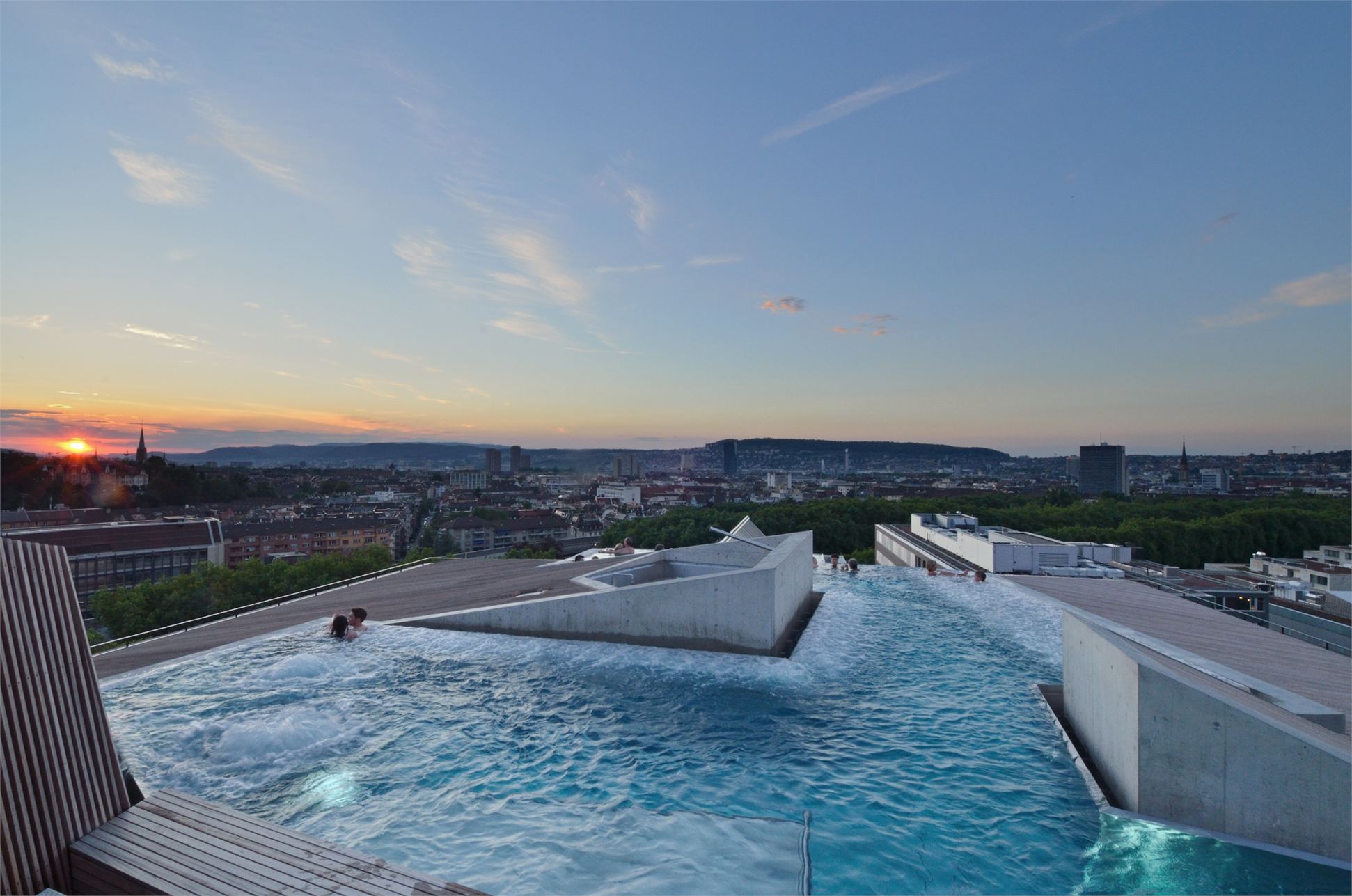 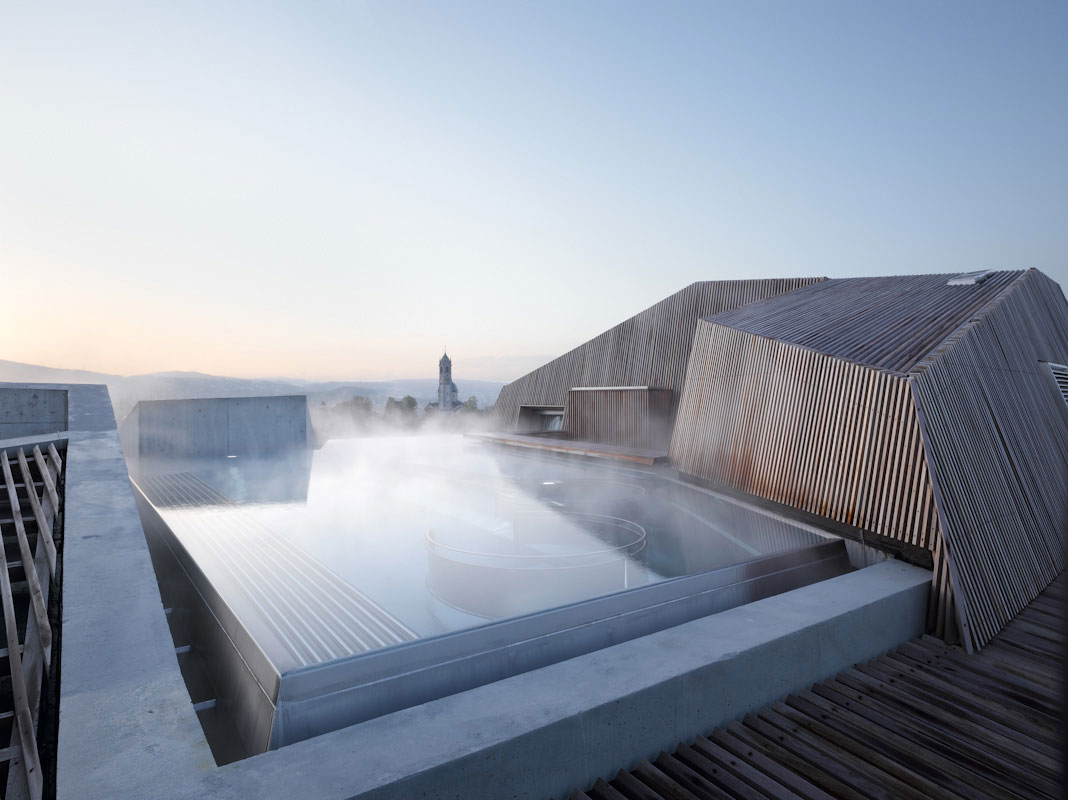 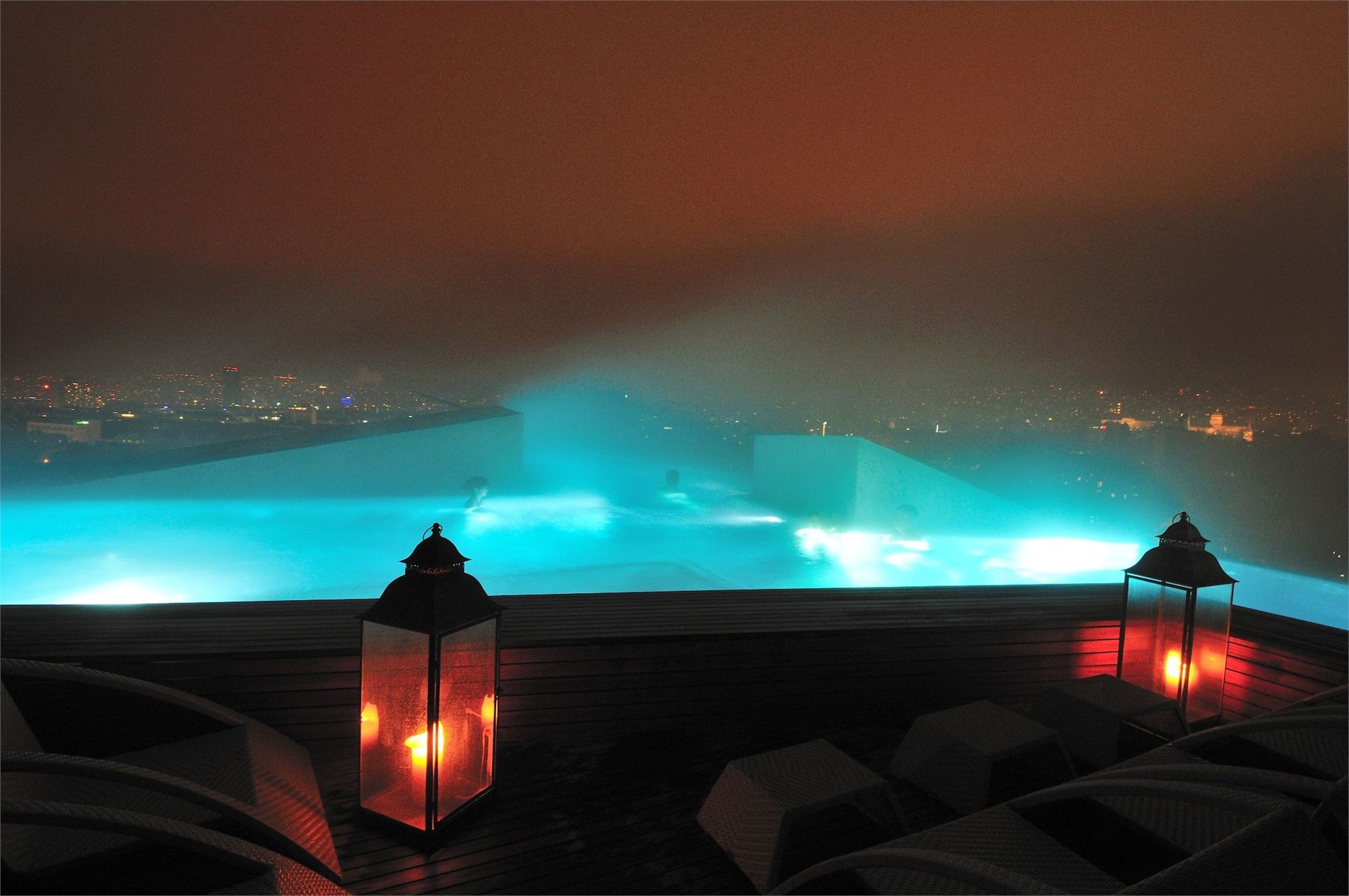 “During its 130-year long and eventful history the site has been modified and converted multiple times. The hotel’s concept and design follow the spatial and structural parameters of the complex stock of buildings. Accordingly, the conversion’s concept imbeds three distinct scenarios: rebuild (the boiling house) – build up (on top of the turbine hall) – incorporate (into the cooling sector).

Rebuild
The boiling house is situated on top of the Sihlberg, a hill in the middle of the city, dominating the site of the former brewery. The brewery’s facade reveals an amalgamation of various phases in the building’s history. When entering the spacious hotel foyer today, three vertically scaled cathedral-style windows – once part of the boiling house – draw the visitor into the depths of space, and into the library.

It is an inviting setting with more than 33.000 books which are piled up in the wall lined with smoked oak and three impressive bottle chandeliers. An upward glance will reveal three high windowed recesses in the shelves – giving away a glimpse of the spectacular first floor board room. The visitor accesses the guest rooms via an open foyer, where a sculptured body of fair-face concrete marks both, spatial centre and reference.

The precisely set windows of the construction provide insight into a body of light which runs through the inner zone of the boiling house, linking the first floor with the roof. At its basis the sculpture leads into the board room where the angular conference table mirrors the erratic shape of the body of light, surrounded by a heavy textile wall cover of red velvet. The rooms are pragmatically arranged in line with the ductus suggested by the existing windows in the facade.

While further pursuing this idea, the rooms are individual in cut, proportion and atmosphere. They commonly avail of a bathroom cubicle which enlarges the living space through partial vitrification. The bathroom cubicle’s modern shape is in deliberate contrast with its traditional materials, such as the textile tapestry made of canvas, or the quality floorboards of oiled oak. Together with vintage objects they remind of the old brewery’s golden age.

Build up
The listed turbine hall – unique in Zurich – and its conserved dignified machinery are witnesses of a proud history in beer brewing. The light enters the turbine hall via two old skylights. Within the modern, slightly raised build up of the hall they form at the same time the centre of two courtyards encircled by the hotel’s corridors.

Visitors who follow the hotel corridors are being granted surprising views into the two yards since they are covered with shards of green bottles. The bottles’ colour is complementary to the colour of the flamboyant red carpet runners, modelled from historic photographs.

The rooms in the build up are marked by their large windows framed in expressive oak cases. Mighty outdoor sliding shutters allow to determine view and shading, in brief generate atmosphere through varied incidence of light. The build up distinguishes itself from the turbine hall through this materiality but with its characteristic iron slats it also sets a reference to the neighbouring cooling hall.

Incorporate
An imposing overbuilt construction bridges the boiling house and its adjacent building, the cooling hall. In the brewing process the cooling hall served as a place to chill the wort after the boiling. This fantastic hall perfused by winds is the site where the hotel realises the concept of ‘house-in-house’.

Eight large suites add up to two long ‘terraced houses’. They are entirely detached from the existing husk, and concise architectural interventions still allow to fully experience the hall with its bold structure of steel. The ‘house-in-house’ theme is also echoed in the interior design of the suites. The open spatial structure is coined by a compact body, which encompasses all functions characteristic to a suite.

The homogenous materialization in oak supports the visual detachment of the construction from its husk. The living space widens by means of the space between apartment and the facade of the cooling hall. The guest can from the inside enjoy a panoramic view over the city outside.
The guiding principle to create from the wealth of existing industrial heritage substance make the hotel’s ambiance both, a unique and authentic experience.

Swim in Aqui mineral water on the roof of the hotel The hotel is also home to the Thermalbad & Spa Zurich, which opened in December 2010 and provides 3,300m² of relaxation space in the brewery’s former barrel filling area. Guests of the B2 Boutique Hotel + Spa can enjoy special deals and direct access via the roof pool.

Guests can move freely in the thermal bath and spa area and do not need any cash to hand, as the admission, treatments, and food and drinks are all charged directly to their room. This is a unique facility in an urban hotel. It not only offers stressed business travellers a welcome range of opportunities to unwind, but also makes the weekend packages even more attractive.”