29 Amazing Sculptures Made out of Cardboard

by Architect K.A.
Reading Time: 8 mins read
0 0
A A
69
SHARES
62
VIEWS
Share on FacebookShare on TwitterPin to Pinterest

Chris Gilmour was born in Stockport, UK (1973), but now calls Udine, Italy home. Using only cardboard and glue, Chris creates incredible sculptures that do not use any supporting structures or wooden/metal frames. Everything you see is 100% cardbaord. His medium of choice is plentiful, cheap and lightweight. 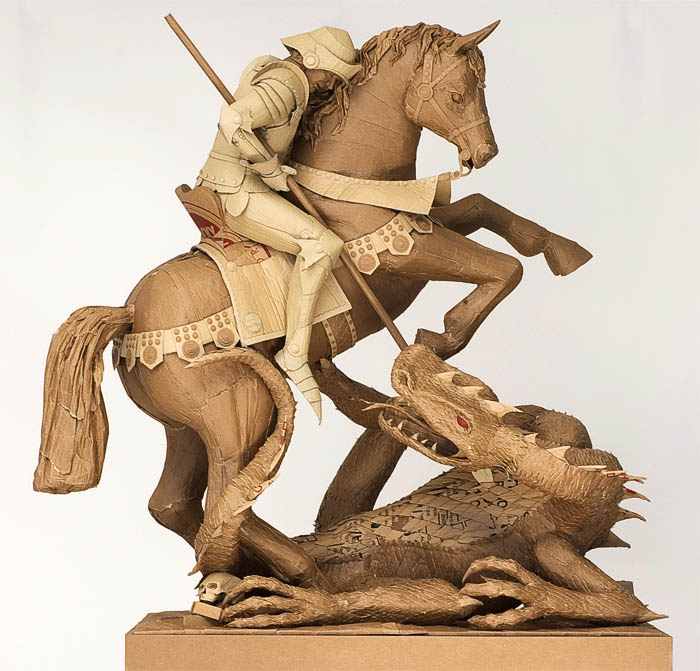 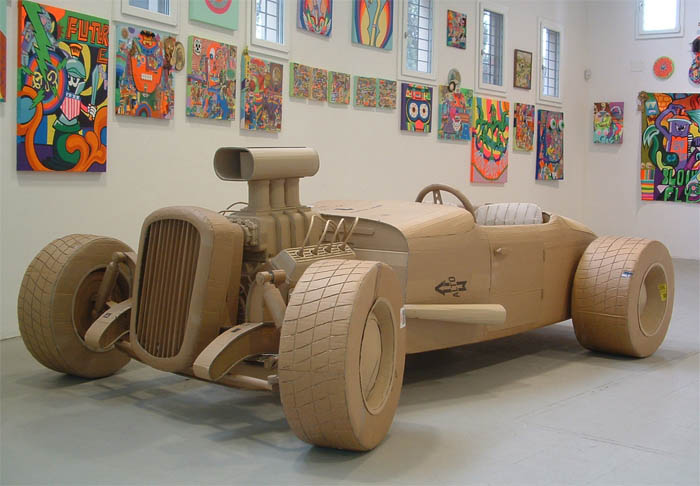 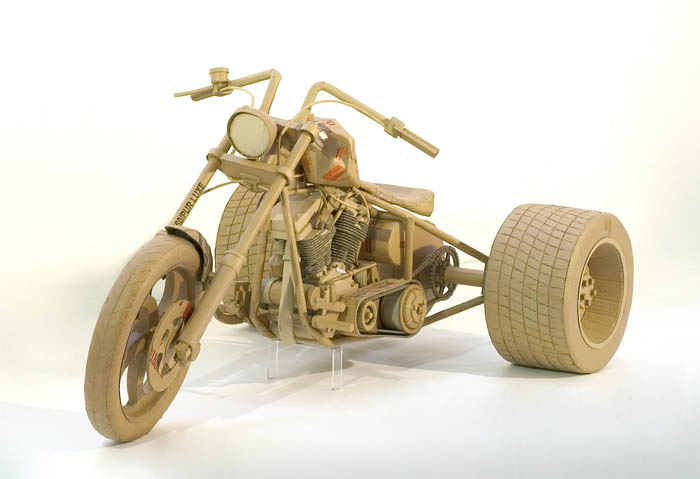 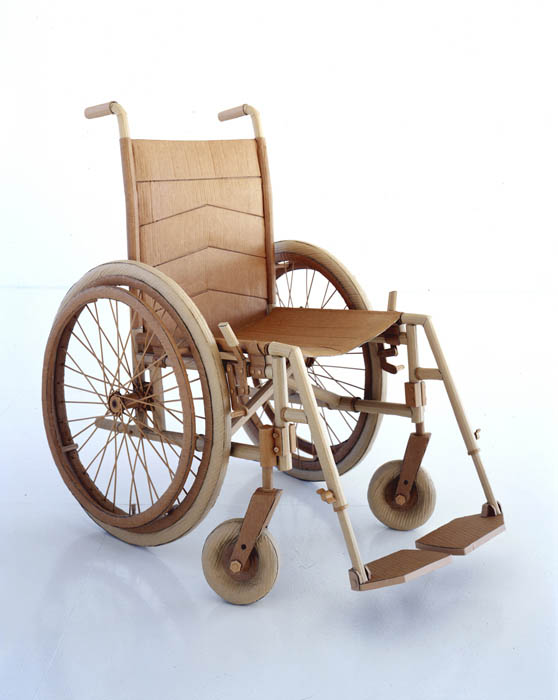 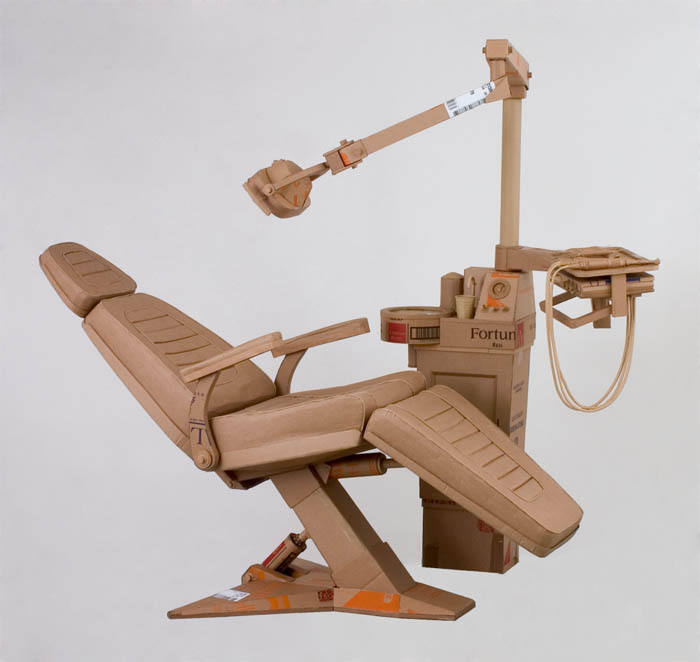 How do you choose the things you portray?

There has been a progression in the choice of objects portrayed, which go from smaller domestic items (like the moka or the typewriter) to objects which are larger and belong to a broader cultural context (the Fiat 500, the Lambretta). However, the reason for the choice of objects has always been pretty much the same- they call up memories and emotions connected to our experience of these (everyday) things.

Since this is both a visual and conceptual work I choose objects for their visual appeal and cultural resonance, but I also usually choose objects which imply an action or interaction of some sort. The interaction of the viewer with the works seems to function as a kind of short circuit between an implied action and the impossibility of performing it: you want to open the car door, or turn the wheel on the bike, but of course you can’t. I think this immediacy is important to enter the work, to grab the viewer. 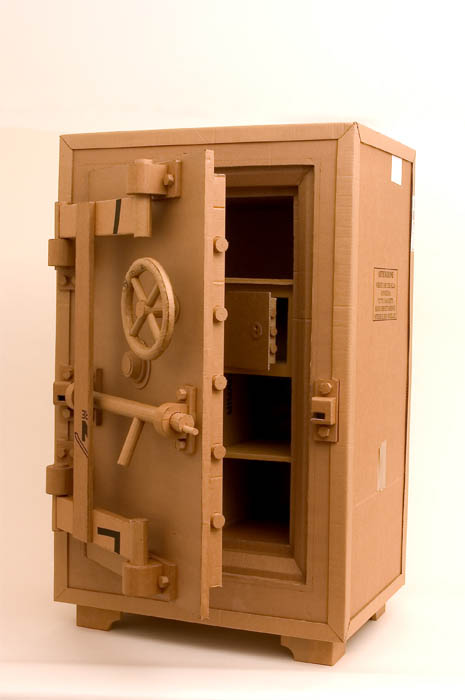 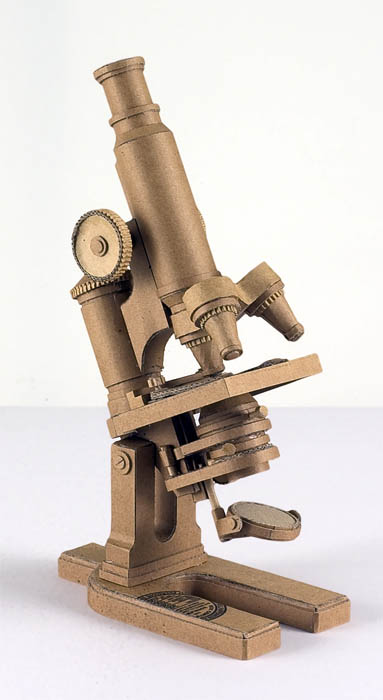 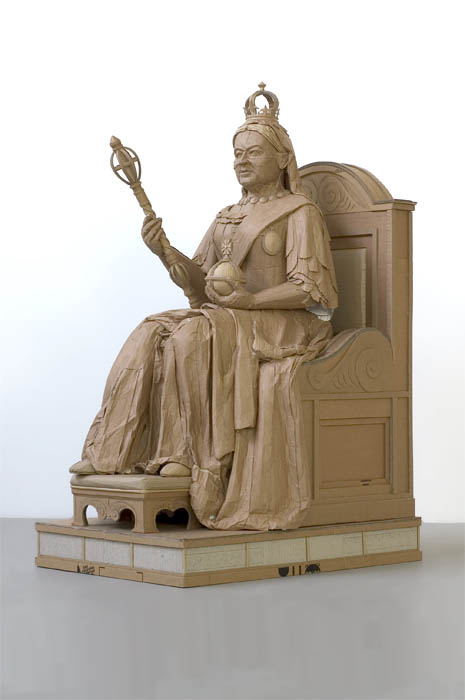 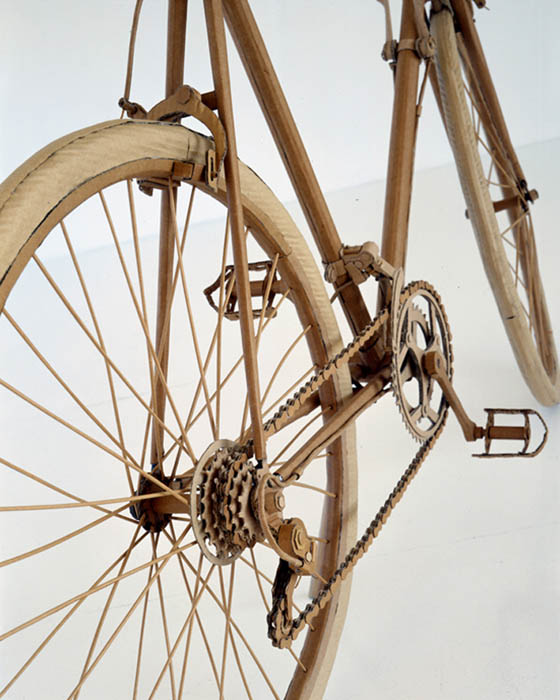 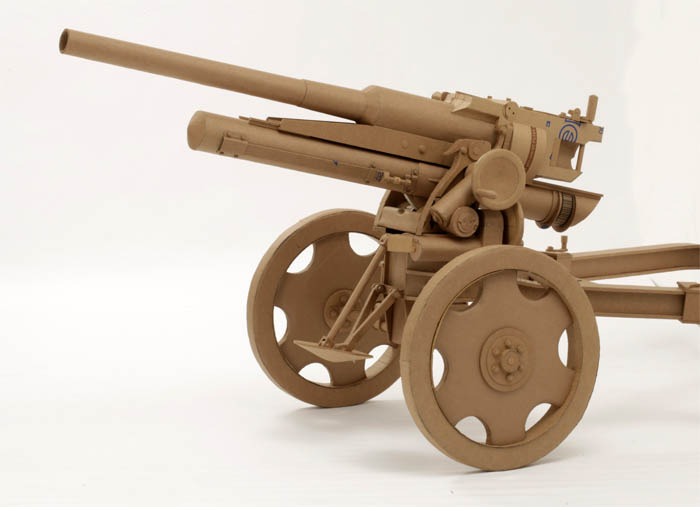 What relationship is there between the artwork and the type of packaging you use?

Earlier works were made with very clean cardboard because I was aiming at a hyper-realistic effect which showed the material “at its best”, or rather seemed to do something impossible with it, making a perfect representation- indeed, many people assumed that the works were real objects that had been painted or covered in paper. The works I am producing now are made from cardboard boxes which are still found on the street, but which show all the printing, tape, labels etc.

I like the idea of concentrating on the material in its “natural state” and playing with the idea of these beautiful objects represented with a material from the waste basket. I guess it’s about trying to be as honest as possible with the material- I don’t want it to get too clean, so you can’t see what it really is. I think it gives another dimension to the work to use scrap cardboard packaging which has been thrown away after the coveted objects it contained have been removed. 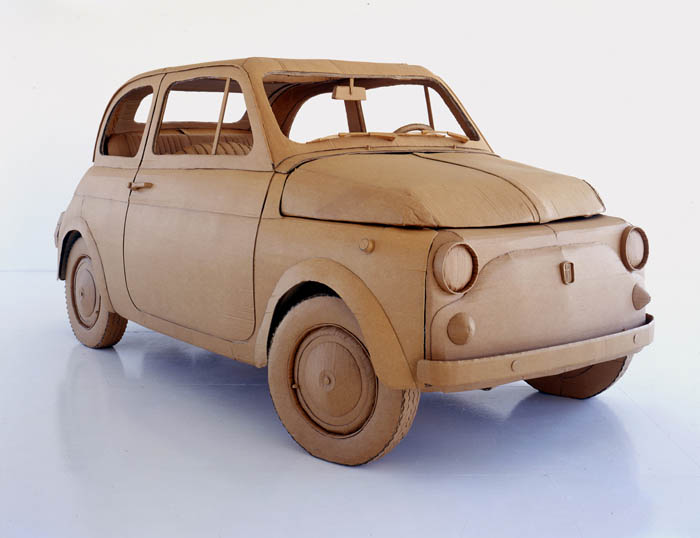 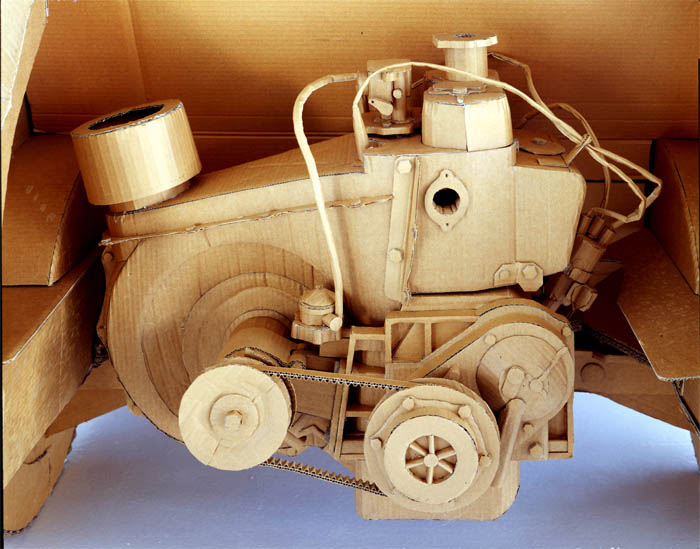 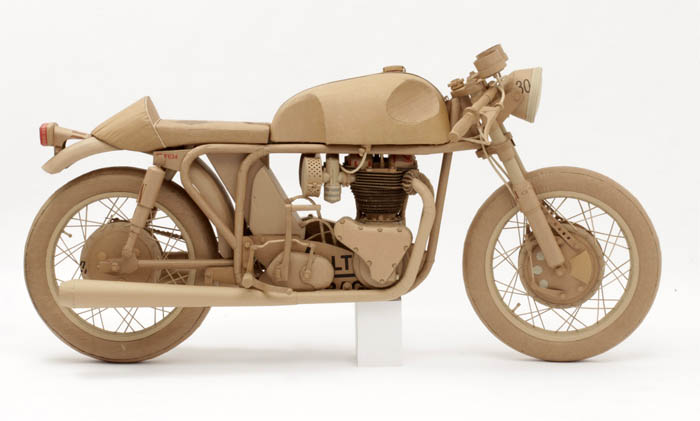 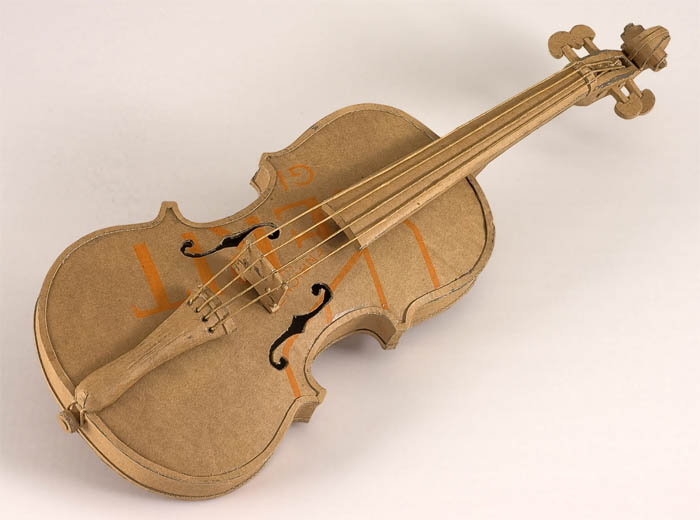 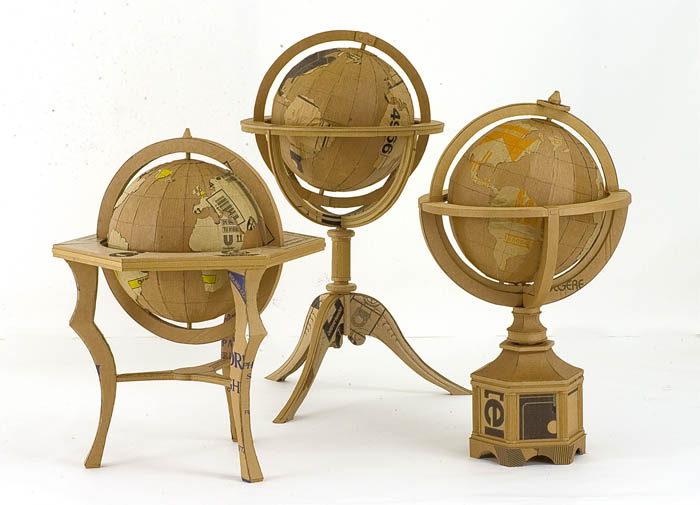 What do you think of the connection between art and “recycling”?

Maybe it’s a way of re-appropriating or taking control of the things around us, which if you live in a city are pretty much all man-made. I think the use of re-cycled or found materials is brought about by our proximity to these things and their familiarity. One of the reasons I use cardboard is because it’s so easy to find- we have an immediate access to these “re-cycled” materials in a way that could never be possible with bronze or marble.

It is also free of the historical and cultural weight of those classical sculptural materials, and can offer new readings of the work. By using a material which everybody knows and understands, I can build on the pre-existing associations to develop ideas and ways of reading the work. It’s a way of creating a language which is understood by many. 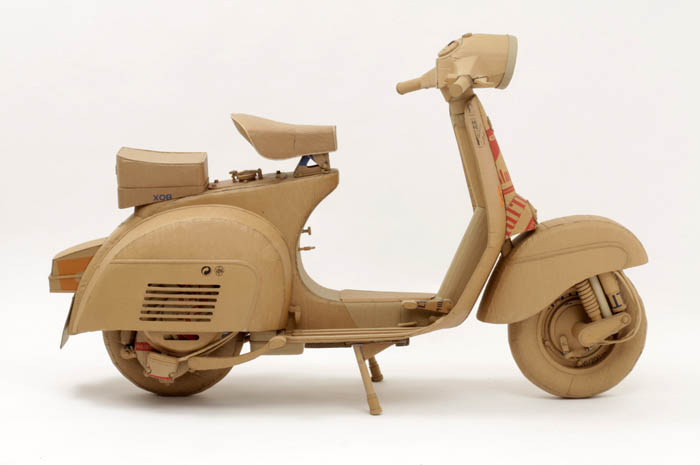 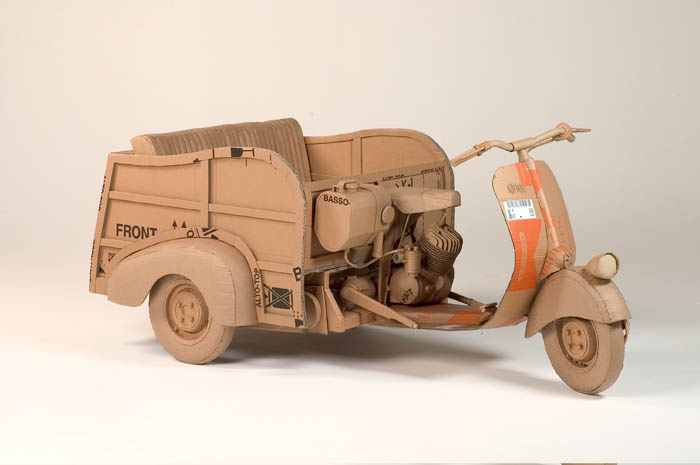 Which do you think is the most significant piece you have made and why?

A key piece is the wheelchair, as this marks the change from earlier works with human figures to the current work without. I used the figures to tell a story about the object portrayed, but the more I worked on the objects the more I realized that the interaction between the object and the viewer was a powerful element- the viewer brings his own story to the object, and doesn’t need a kind of theatrical set to explain the situation.

People often have a very immediate reaction to my works- they try to open the car door, or type on the typewriter and I like the game of contrasts-real/not-real, functional/non-functional, heavy/light- and the sensation that causes. I think that the viewer projects himself into the work, and indeed the reaction to the wheelchair was different- it’s a slightly disquieting object and no one wanted to touch it. 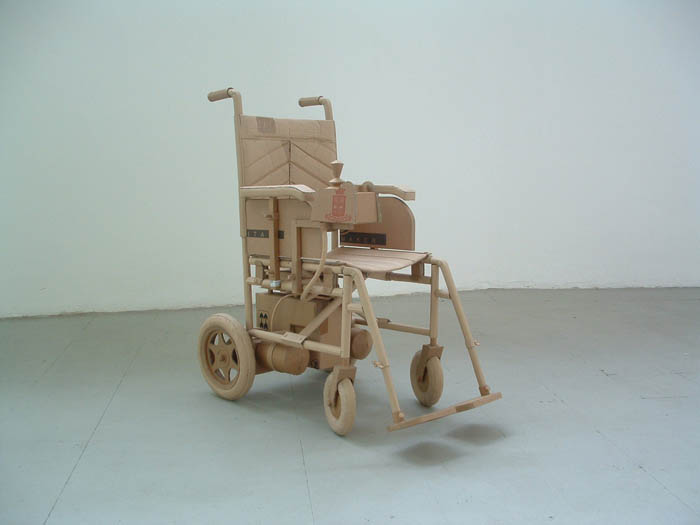 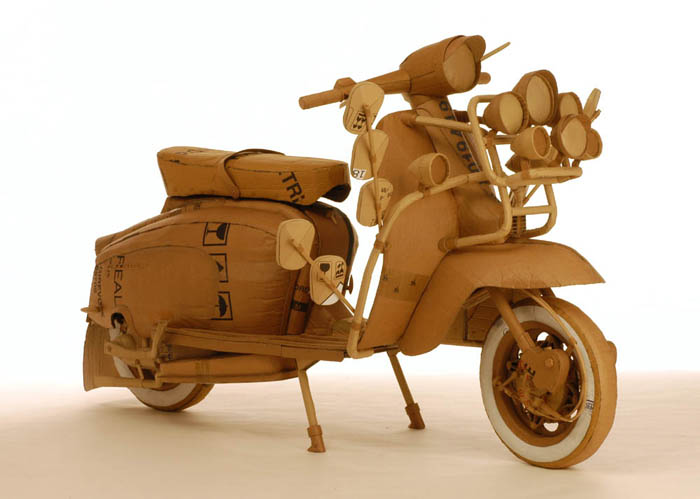 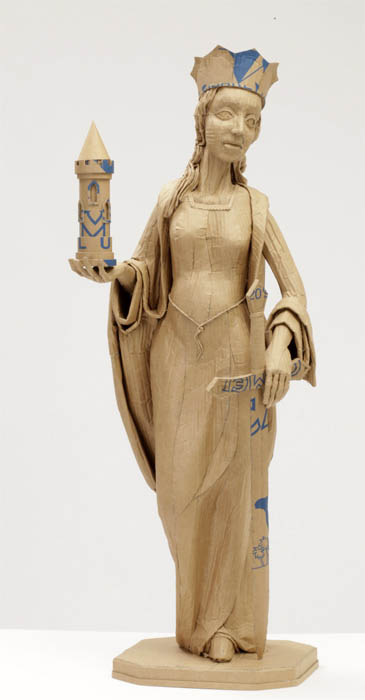 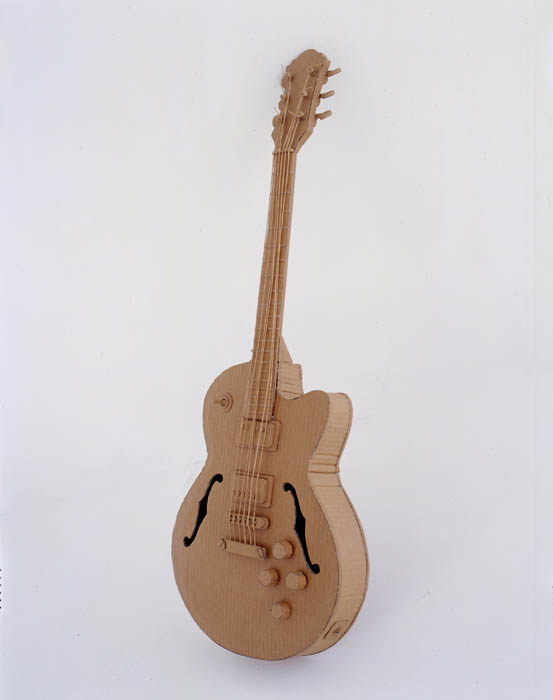 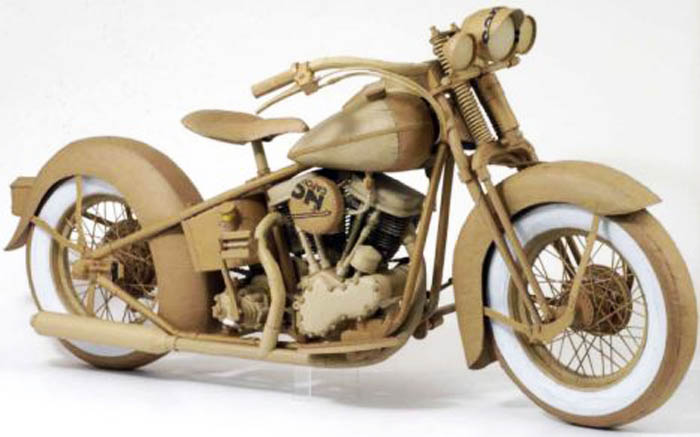 Which artists have influenced you, who has been an inspiration for you?

I really like other sculptors who seem to share my interest in materials. I get the impression that their ideas come from playing about with things. For example, artists I always love to see for their approach to materials are Anish Kapoor, Andy Golds-worthy, Tom Friedman, and Bill Woodrow – Golds-worthy and Kapoor make sculptures with an incredible attention to the nature of the materials they use, and, although the appearance of the work is completely different, I think Friedman and Woodrow have a similar sensibility. It’s like the classical ideas of sculpture about the “soul” of the material, but instead of a block of marble it is being applied to leaves of washing machine… 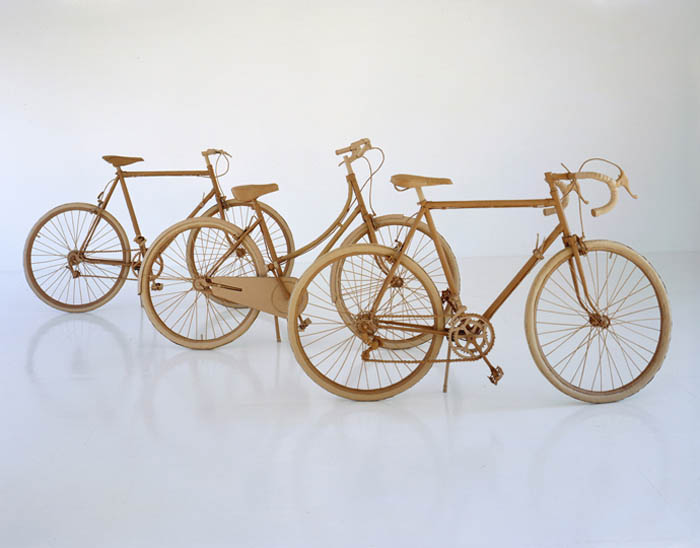 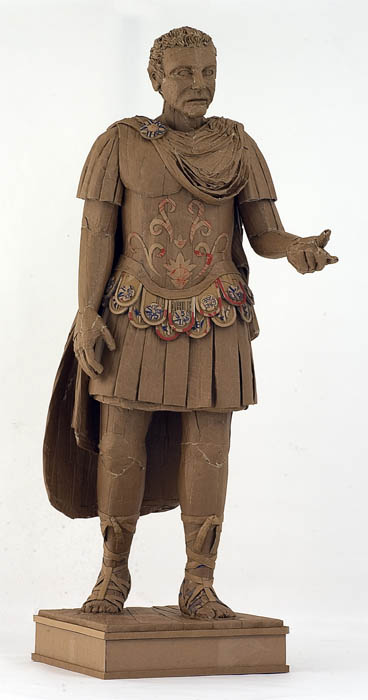 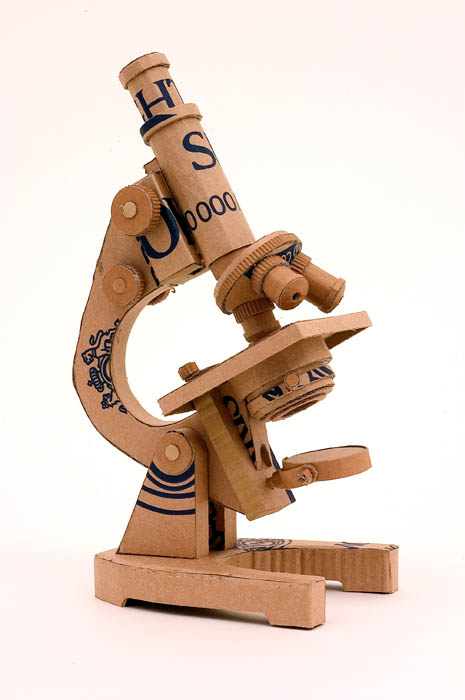 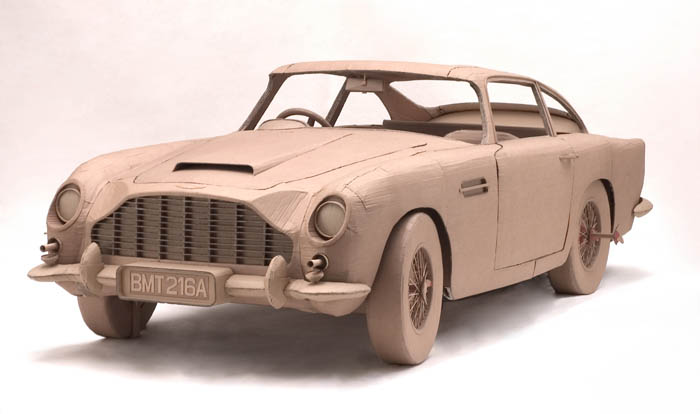 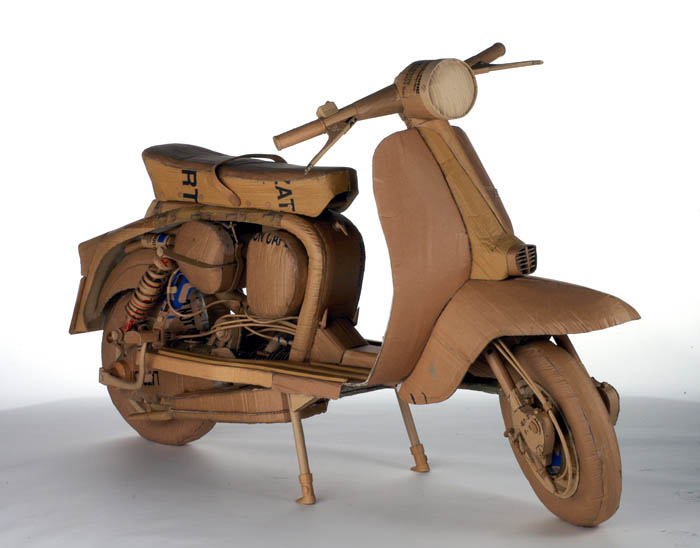 Gilmour’s work includes stunning virtuoso life-size objects, as well as cruder and more essential reproductions, sometimes left at a stage that calls to mind drafts or models. These are however all based on objects we have all experienced first hand- a typewriter, a car, a bicycle, a wheelchair.
These objects are always carefully chosen for their evocative and conceptual power, for the potential for mnemonic narration that they contain. They offer a blank canvas upon which the viewer can project their own memories or experiences, recalling collective perceptions or the gestures and the rituals of daily life. All the objects have an uncanny power to provoke a sensation of attraction and a desire to interact in the viewer.

The ordinariness of the actions associated with these objects causes the viewer to unthinkingly act out the gesture associated with it- to type, or to open the car door- and it is this contradiction between the seeming functionality of the objects and the fact that in reality they are “fake”, this peculiar conceptual short circuit, which increases the bewildering effect of the works and lets us into a poetry of pure plastic forms.

10 Of the Most Unique & Unusual Homes in the World