We all know that celebrities lead very different lives compared to the average citizen, and many people are fascinated by the luxuries these famous people can afford. If you have always dreamed about sailing around the world on a yacht, then these celebrity yachts will spark your imagination: 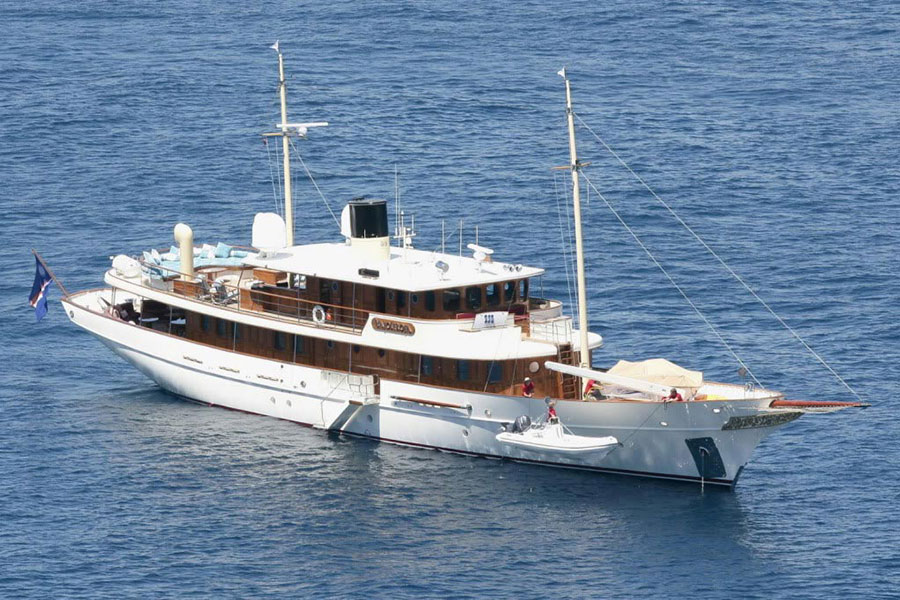 As a well-known actor who starred in “Pirates of the Caribbean” when he played the role of Captain Jack Sparrow it’s fitting that Johnny Depp has his own vessel to sail the seas. Maybe his months on the water filming the movies gave him a love for the water? This classic, modern superyacht has a length of 47 meters and was built in Turkey by Proteksan Turquoise. The name “Vajoliroja” comes from a combination of names in the Depp family: “Va” for Vanessa Paradis his girlfriend, “jo” for Johnny’s own name, “liro” after Depp’s daughter Lily Rose, and “ja” for Depp’s son Jack. (via) (Photo) 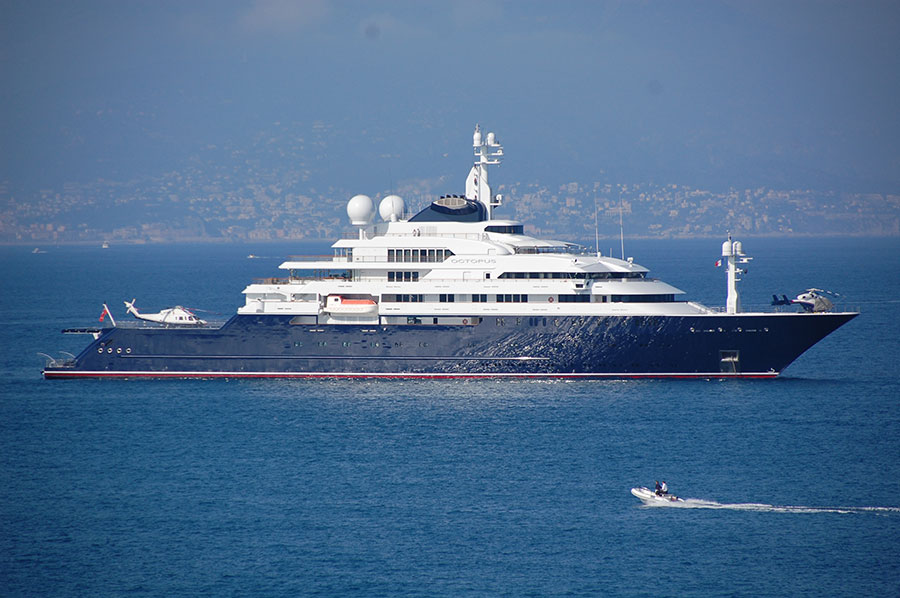 Paul Allen is a self-made billionaire whose fortune was built through Microsoft. His superyacht features two helipads, making it easy to access this ship from any location. Other onboard features include multiple game rooms, a spa, recording studio, hot tub, swimming pool, movie theater, and two submarines. (via)(Photo)

As one of the best golfers in the world, Tiger Woods is a household name and has won many golf titles. Even though Tiger Woods’ career has been struggling and he recently went through a divorce that was publicized in the gossip news channels, he still has the resources to own a yacht. His current relationship is with Lindsey Vonn, who is an Olympic skier, and the privacy of their relationship might be the inspiration for the name of his yacht: Privacy. The yacht was made by Christensen and it is 47 meters in length. (via) (Photo) 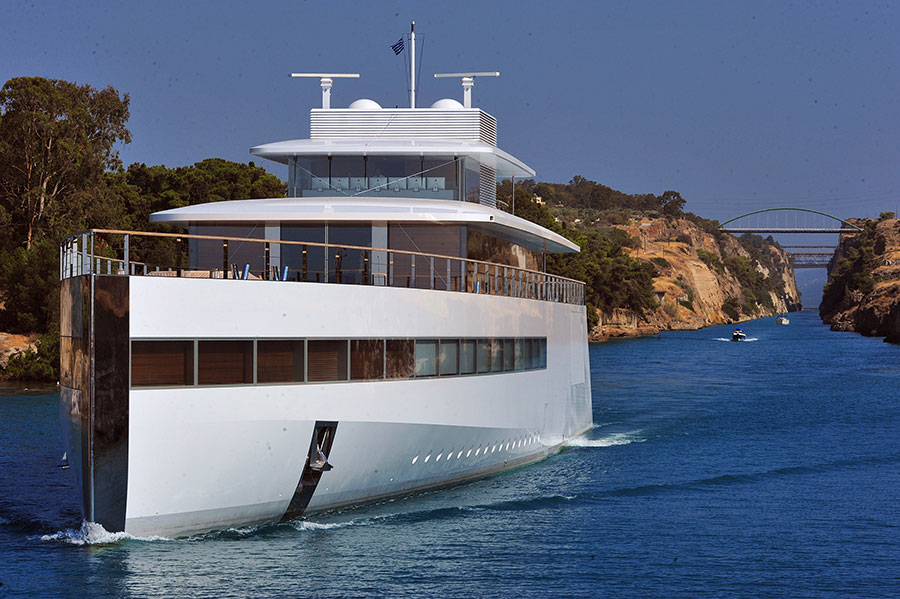 Before his death, Steve Jobs commissioned a yacht to be built by Phillippe Starck. The luxury ship was started, but it didn’t reach completion before Steve Jobs passed away in 2012. The yacht is built with glass features inspired by the Apple store designs, and it includes six bedrooms with a top-of-the-line electronic communication system to facilitate communication throughout the ship. The ship is run by a group of 27-inch iMac computers located in the wheel house. Job’s widow, Laurene Powell Jobs, maintains ownership of the vessel now and it worth $120 million. (via) (Photo) 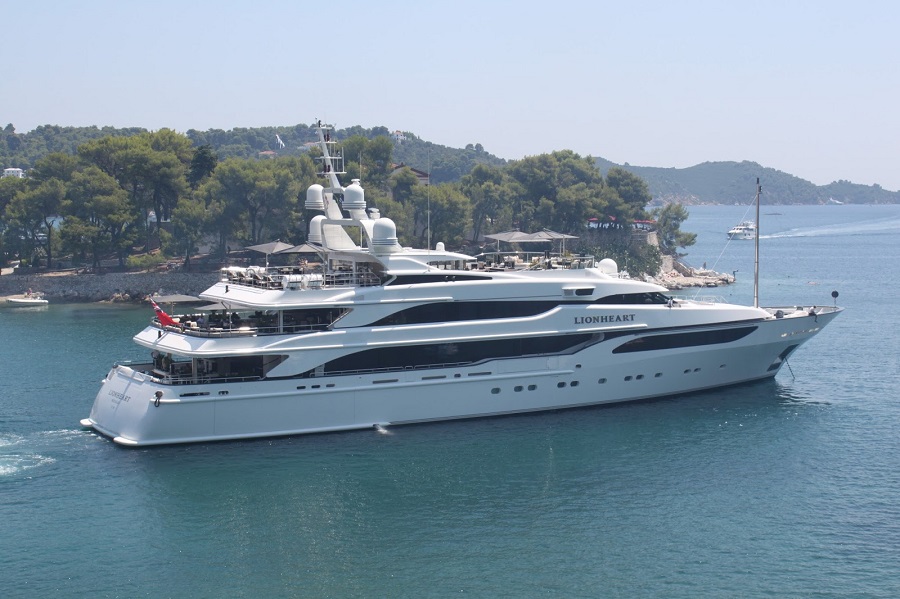 Retail giant, Arcadia, is led by Sir Philip Green, who enjoys living large on his yacht “Lionheart.” The 206-foot long vessel was designed by Benetti, and it includes every luxury you could imagine. On-board features include an electrically designed sun deck, dedicated bar, and an on-deck swimming pool. (via)(Photo) 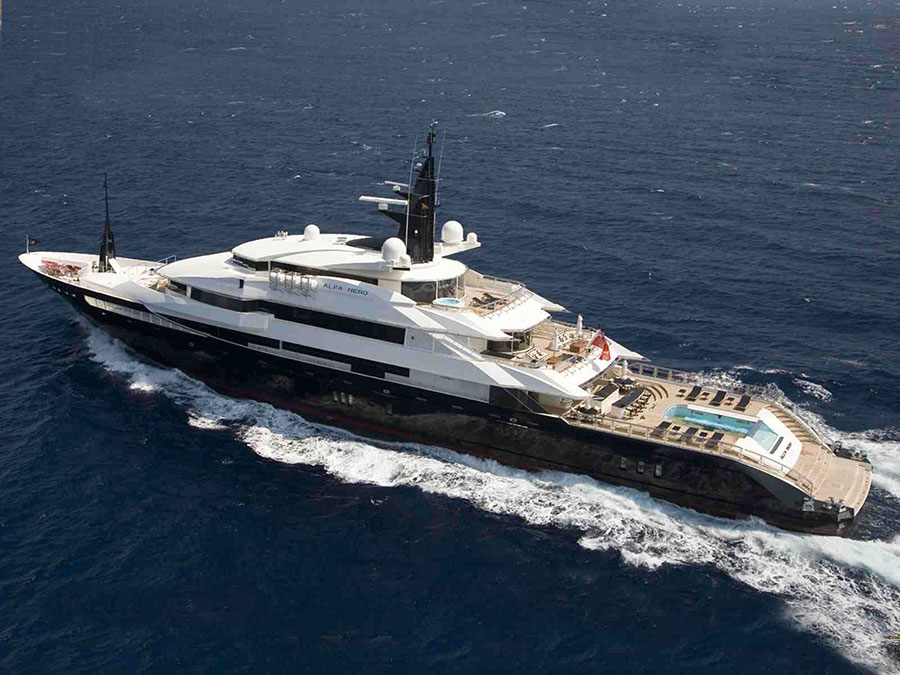 Steven Spielberg is a screenwriter and film director, reportedly with a net worth of more than $3 billion. It’s easy to see why he can afford a luxury yacht! “Seven Seas” was built by Oceanco and the 86-meter ship features a cinema screen and an infinity pool with a 15-foot glass wall. (via)(Photo) 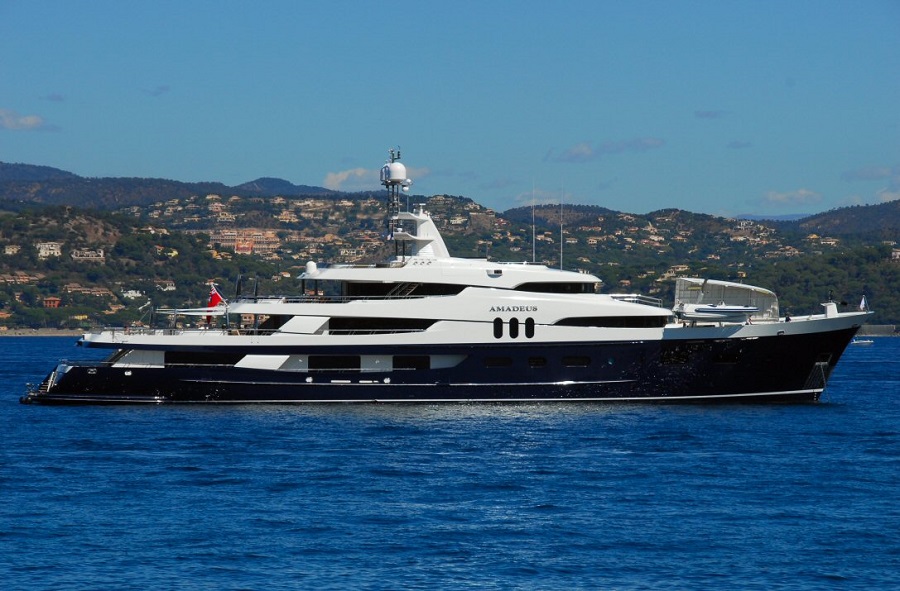 As the lead singer of U2, Bono has performed all over the world. Even though he doesn’t travel to his concert locations on his yacht, Cyan, it is a great getaway when he needs some time to recover after a busy touring schedule. Bono has led U2 for over 30 years, and his music has withstood the test of time. Cyan was built by Codecasa, and it is 49 meters in length. (via)(Photo) 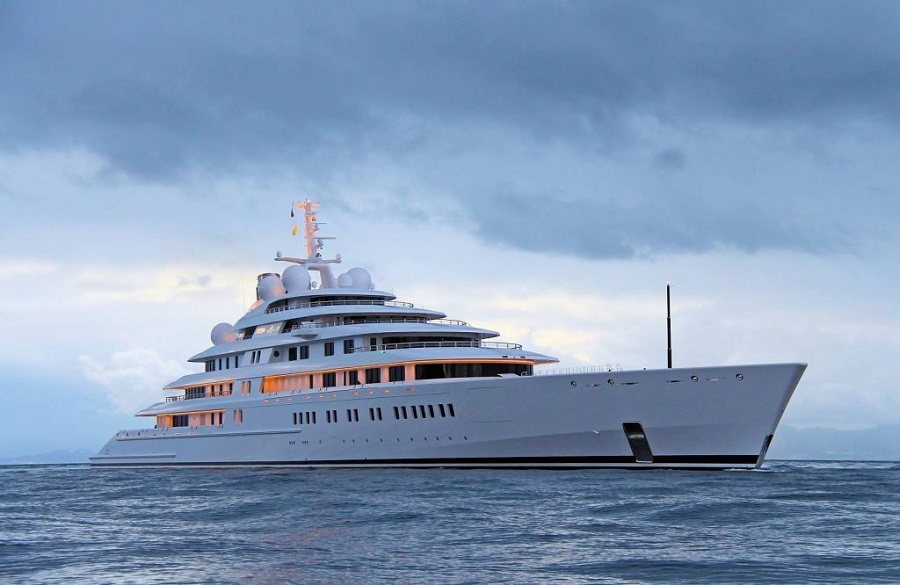 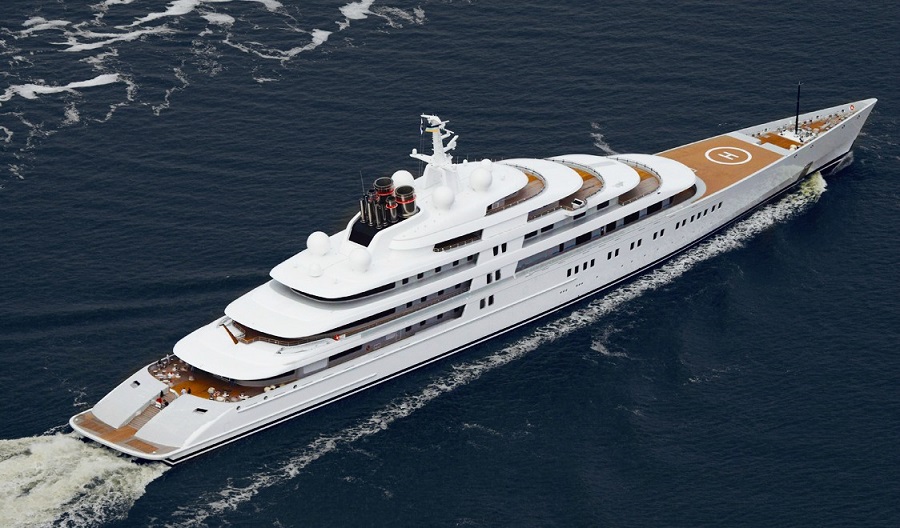 Luxury yacht, Topaz, is owned by the Deputy Prime Minister of the United Arab Emirates: Mansour Bin Zayed Al Nahyan. The yacht is 482 feet long, which is longer than some of the cruise ships that sail the waters. The interior of the yacht has been kept private, leaving people to speculate about the luxuries that are contained on board. (via)(Photo)

One of the most widely-known singer and songwriters in the world, Eric Clapton has earned his money in the music industry. His yacht is called “Va Bene” and it was previously owned by Bernie Ecclestone. The story is that Eric Clapton chartered the boat in 2005 and liked it so much he decided to buy it. The yacht is 47.8 meters long, and it can house as many as 12 people at once. (via)(Photo) 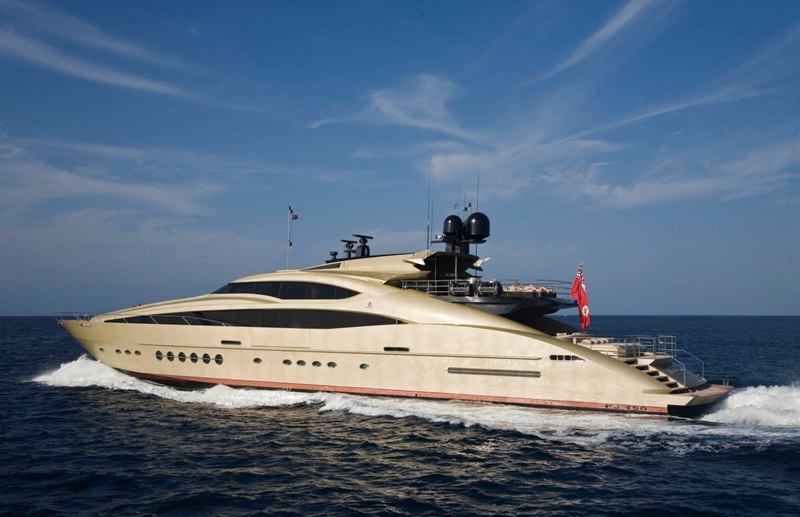 Nicole Kidman sails the sea in style on her luxury yacht, Hokulani. With a a master stateroom, VIP double stateroom, and several twin cabins, there is plenty of space to host guests on board. The yacht features a comfortable space with luxurious finishes, and you can find glossy cherry wood throughout the ship. Some of the unique features include a swim platform, lots of deck space, and a centralized and integrated entertainment system. (via)(Photo) 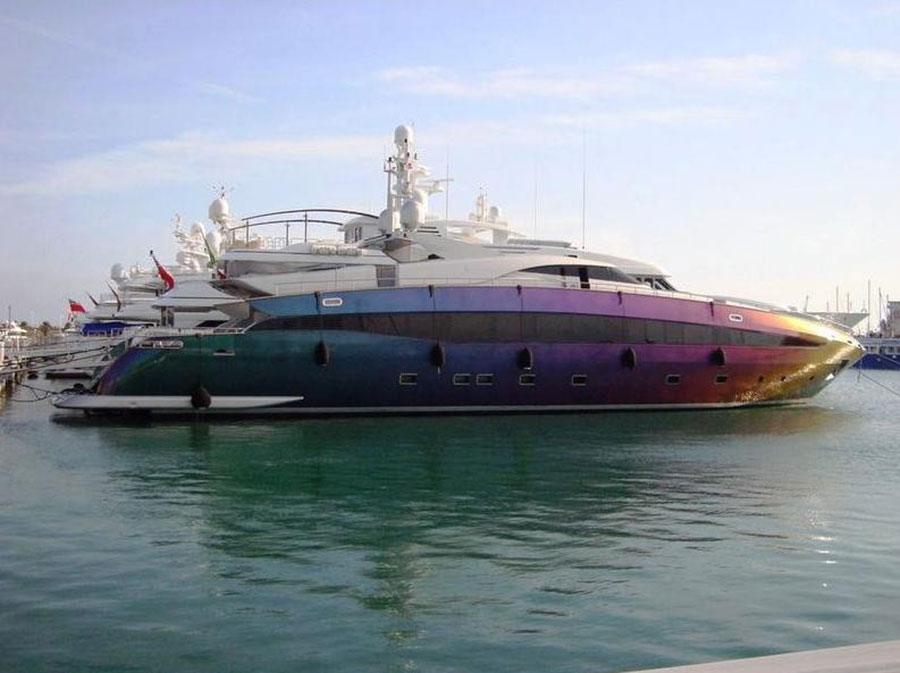 Roberto Cavalli is from the city of Florence, and this fashion designer is well-known for his creative designs. Cavalli’s fashion designs often include exotic prints, and his unique colors and patterns have been incorporated into the design of his yacht, Baglietto. Nearly every person has worn clothing inspired by Roberto Cavalli’s designs, because he is credited for the idea of sand blasted jeans patterns. His yacht incorporates a blend of colors on the side of the ship, that melts from gold, orange, red, purple, blue, and finally to green. The iridescent colors are easy to spot in any location on the water. (via)(Photo) 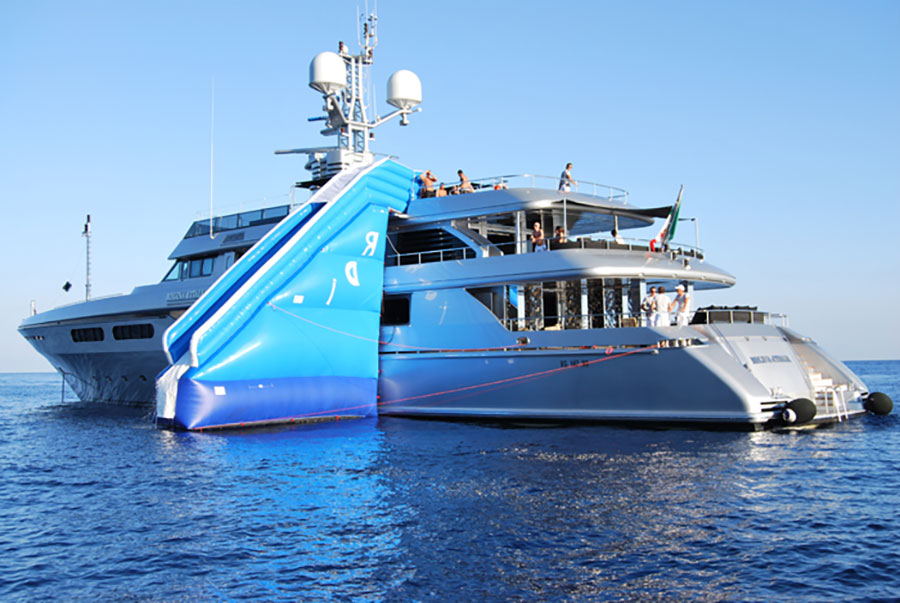 Joining the ranks of well-known Italian fashion designers with private yachts, Dolce and Gabbana is at the top of the list. This fashion line includes clothing, watches, sunglasses, handbags, and footwear. Their yacht is 51 meters in length and often hosts parties for celebrities and models. (via)(Photo) 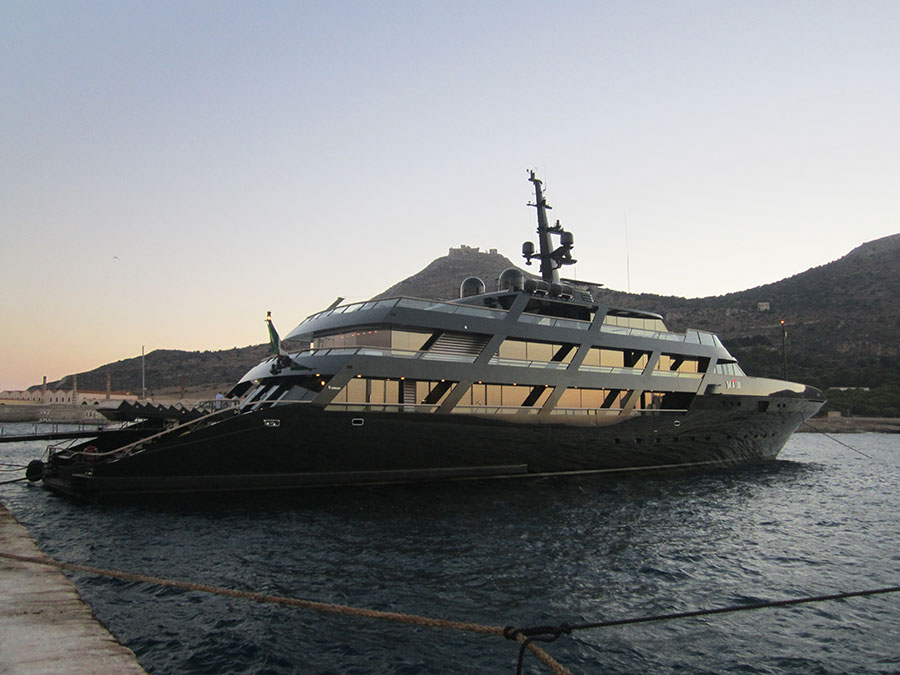 Another successful Italian fashion designer is Giorgio Armani, and he also sails the seas in his own luxury yacht. Giorgio’s yacht matches the sleek, elegant, classy designs that are incorporated into his clothing lines. Codecasa is the designer of this yacht, and the ship is nicknamed “Main.” The classy design of the black yacht has drawn photographers looking for a stylish place for their photo shoots. The ship fits in well with the other photos found in the high fashion magazines! Giorgio Armani also own a second yacht named “Maria” after his mother, and this second yacht is 163 feet in length. (via)(Photo) 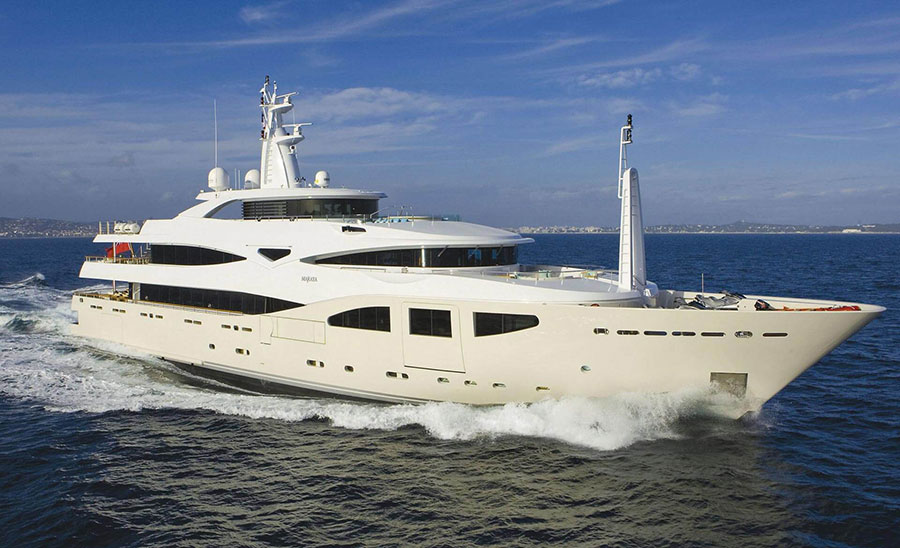 It is easy to see how popular music artist, Sean “Diddy” Combs can afford his own yacht, because he’s had a very successful career. This yacht features a projector screen, stage, and a party floor with a built-in bar on the top deck. This luxury $65 million yacht is so big that it requires 10 staff members on board. (via)(Photo) 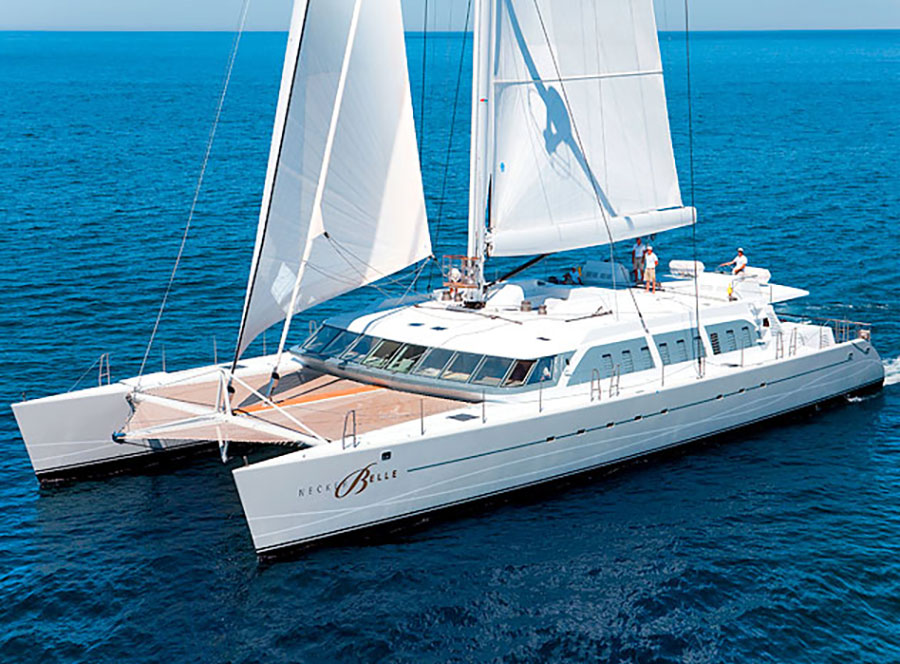 One of the fastest catamarans in the world is “Necker Belle,” owned by Richard Branson. It can travel up to 20 knots, and Branson hires it out to others for the cost of $100,000 per week. The yacht can sleep up to 10 people. (via)(Photo)

Most people don’t consider Saddam Hussein a “celebrity,” but he is a well-known villain whose name is recognized around the world. When Hussein was called a hero by certain countries for initiating a war in the Middle East, a royal family in Saudi Arabia gave Hussein a yacht as a thank you gift. “Al Mansur” was 85 meters long, and it had the perfect design for someone who might need a fast getaway. A secret passage on the yacht led down to an escape pod where a mini-submarine could be accessed. This beautiful ship was destroyed in a United States air strikes, and it sunk after being hit 16 times. (via)(Photo) 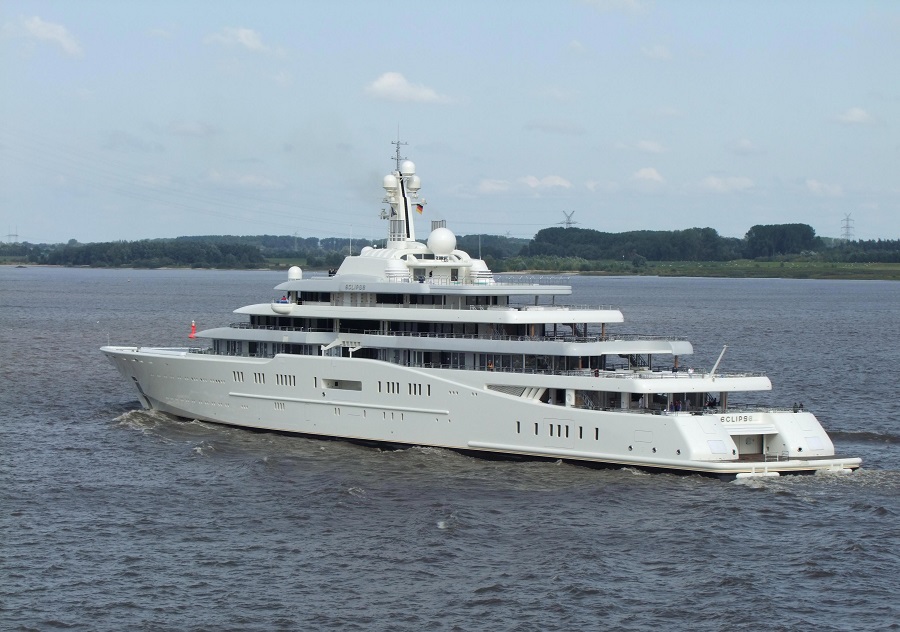 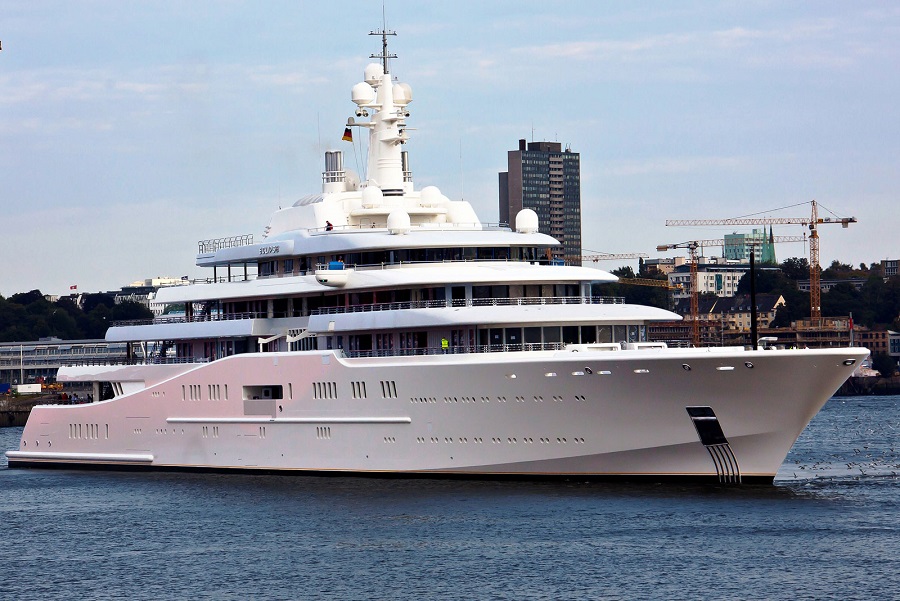 Russian multi-billionaire, Roman Abramovich, likes everything bigger and better than the rest. His yacht is 163.5 meters in length, making it one of the largest privately owned yachts in the world. This yacht was created by Blohm + Voss, and it is a beautiful vessel on the sea. (via)(Photo) 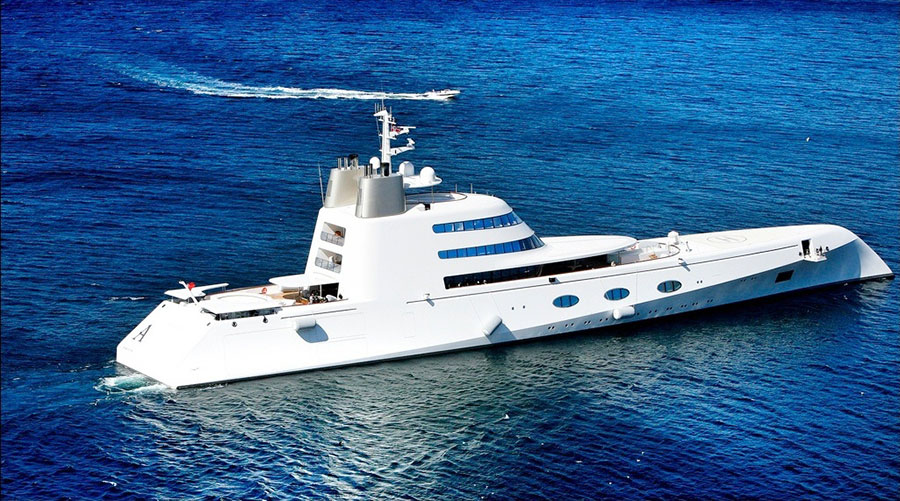 Another Russian billionaire who enjoys sailing the sea is Andrey Melnichenko. His yacht, named “A” was designed by Philippe Starck and no expense was spared when the yacht was built. Fingerprint security access is required, and security is a high priority with 44 security cameras and bomb-proof windows. The interior features silver leaf walls and a stair case that cost $60,000. In the master bedroom, the king size bed can rotate with the push of a button, allowing him to enjoy the surrounding views without getting out of bed. (via)(Photo) 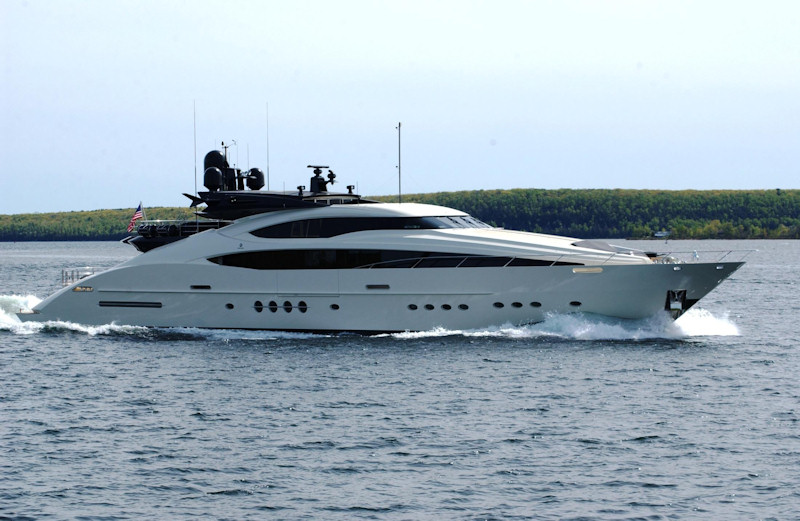 Being one of the most famous fashion designers affords Calvin Klein the ability to sail the seas in luxury. This superyacht was built by Palmer Johnson, and it is a length of 4.57 meters. Klein is known for the celebrity parties held during the Cannes Film Festival, and many rich celebrities were invited to join the parties on board. Features include an on-board barbecue, bar, Jacuzzi, six cabins, and relaxation pads. (via)(Photo)

On a recent DesignBoom visit to the 2014 monaco yacht show, the CRN mega yachts ‘j’ade’ 60m vessel – the first to feature a floating garage – was a finalist in the interior design award category. the ship was designed to feel at one with the sea as it boasts special full height windows that provide exceptionally wide panoramic views. this feeling is even more evident because of the innovative flooded garage that enables the owner to store and easily access the 8 meter riva iseo speedboat without the use for a tender lift. the hydraulic operated bay can dry out in three minutes and can also be transformed into a beach club terrace accessible ocean pool.

The prestige nominated inside layout was crafted by studio zuccon international project and was designed in collaboration with CRN’s technical office and centro stile. its styling has a classical focus but has refined modern and elegant hints that are reflected by the fusion of leather, marble, metals and wood. such textiles as the canaletto walnut, polished rosewood, afromosia strips and white tai ping carpets highlight these influences. the 60m ‘j’ade’ has room for 13 crew members and 10 guests, providing four decks and an outdoor diving table that can cater for up to 14 people. to enthuse all these passengers, a videoworks developed audio/video entertainment system is set up throughout the ship and the main salon features a green marble bar that has a large aquarium backdrop.